Yearn-finance, a decentralized finance (Defi) token, has reclaimed the most expensive crypto asset title in the market after shadowing Bitcoin's price. YFI extended the bullish action after breaking out of a strategic ascending triangle pattern.

Closing the gap to $90,000 was a walk in the park, as observed on the chart. However, little progress was made beyond the new all-time high of $94,990. A correction ensued with Yearn.finance seeking higher support. Meanwhile, the token trades slightly above $85,000 at the time of writing while buyers focus on lifting past $100,000.

Before the majestic breakout, Yearn.finance consolidated within the confines of an ascending triangle. This is a bullish continuation pattern that forms in an uptrend. A break past the triangle's x-axis is usually massive and has a target measured from the pattern's highest to the lowest points. For example, YFI's ongoing upswing had a 42% target of $75,511, but the bullish leg extended to high above $90,000.

Yearn.finance is still in the bulls' hands, as highlighted by short-term technical indicators on the 12-hour chart. The Moving Average Convergence Divergence (MACD) has a massive bullish signal confirmed by the MACD line (blue) wide divergence from the signal line. If this technical picture remains intact, YFI's uptrend will last longer. 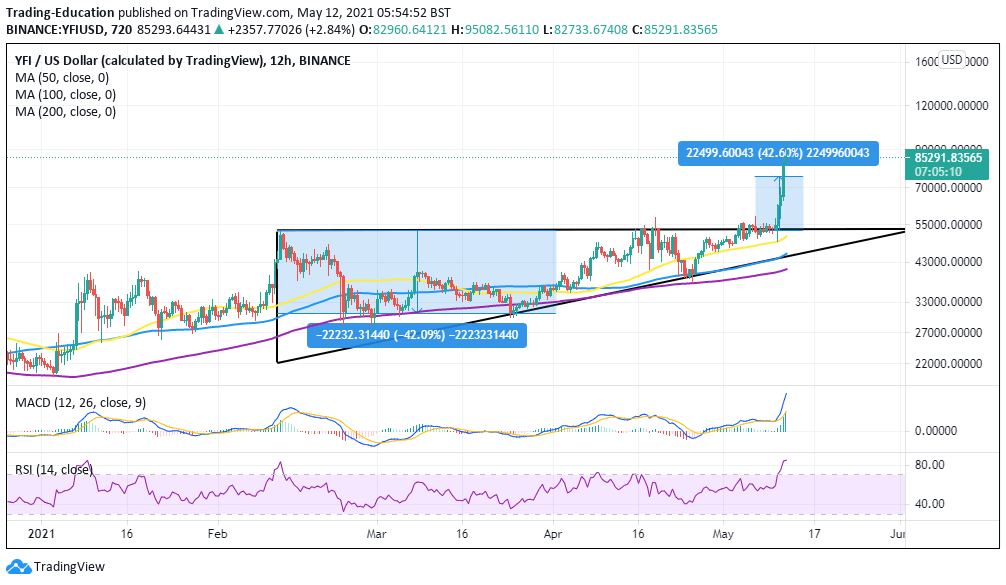 Consequently, the Relative Strength Index (RSI) adds weight to the bullish outlook after striking levels beyond 70. Sustaining an upward movement within the overbought region is usually a bullish signal.

On the other hand, bulls focus on gains above $90,000 and establish higher support. Besides, their attention is glued on the ultimate liftoff to $100,000.

According to data by Santiment, an on-chain analytics platform, Yearn.finance is experiencing an uptick in speculation. The active addresses on-chain metric displays a significant increase in the number of addresses involved in transactions on the network.

The addresses bottomed out at 519 on May 10 but have soared to roughly 1,450 at writing. A spike in the number of addresses suggests that network activity and investor speculation for gains to higher levels are rising. Therefore, a persistent increase in this metric is a bullish signal.

Santiment also brings to light the spike in social media-related mentions. In other words, comments related to Yearn.finance on various social channels like Twitter and Telegram have significantly increased in the last 24 hours, as illustrated on the chart.

It is worth mentioning that a surge in social volume is not a bullish signal despite the price increase. Note that, as the social volume drops, the price tends to drop because the token cannot sustain the momentum. Investors will likely sell as the volume soars, thus adding weight to the overhead pressure.

YFI
Yearn
Top Brokers in
All Regulated Brokers
67% of retail clients lose money when trading CFDs with this provider.