The Bitcoin price has added over 300% return during the last 12 months. It ended 2020 on an absolute tear, finishing around $29,000 per Bitcoin. The buyers have remained in control for the last 3 days to push the price above $34,750. Renewed institutional interest and the prospect for border mainstream adoption has buoyed BTC by more than 300% in 2020, helping it obliterate 2017 highs.

On December 12, BTC jumped up from $18,000 and managed to flip the 20-day SMA from resistance to support. Since then, the premier cryptocurrency has been on an absolute tear, nearly doubling in its valuation. As of now, the buyers are looking to break past the $40,000 and $50,000 psychological level.

Looking back, it does seem like Bitcoin’s current bull run kick-started around October when payments giant PayPal announced that they would be offering bitcoin and cryptocurrency support. Following that, it seemed like a series of institutional interest from the likes of MicroStrategy, Citibank, and JPMorgan has significantly buoyed the price up. In fact, the former has purchased around $1.1 billion worth of BTC.

A leaked Citibank report in December 2020 revealed that one of their senior analysts feels that Bitcoin price could potentially reach $318,000 by December 2021 because of its reputation as a "21st-century gold."

Ready to invest in Bitcoin BTC?

Analysts Give Their Bitcoin Price Predictions

Celebrated Bitcoin analyst Willy Woo believes that BTC is never going to break below $20,000 again. According to Woo, the $24,000 support is a solid barrier that would require a financial catastrophe to crumble. 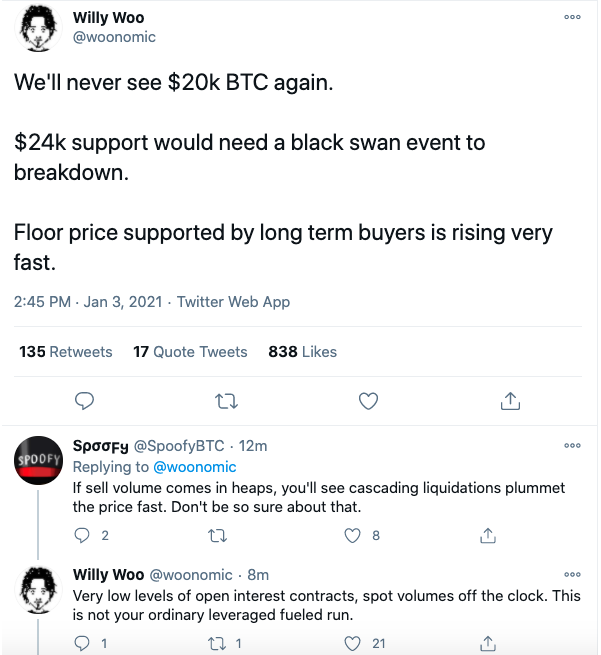 Previously, around December 16, Woo had predicted that BTC is nowhere near its all-time high levels. 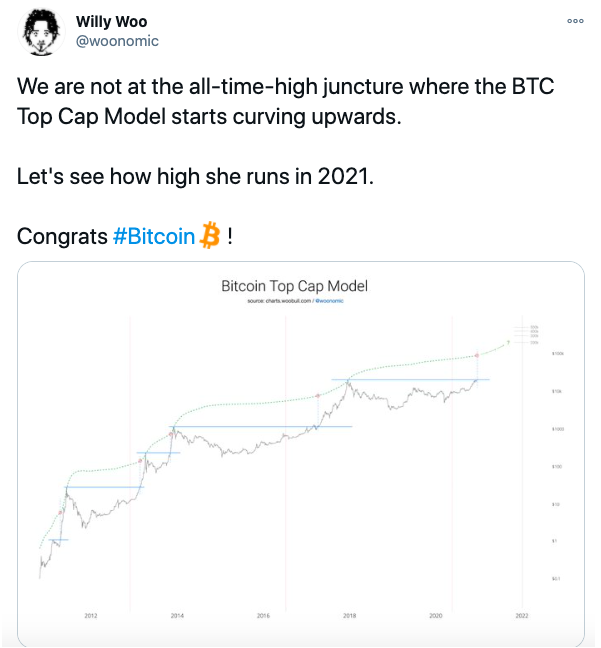 Woo concluded that, as per the current trajectory, $100,000 is a “ridiculously low target.” However, he feels that $55,000 is the next price landmark, wherein Bitcoin will become a trillion dollar market. Do note that, as of writing, Bitcoin’s market cap has surpassed $600 billion.

There was another interesting observation that Woo made.

It measures the average investor's profit or loss, by calculating the variation between the purchase price and the sale price of coins moved on-chain. 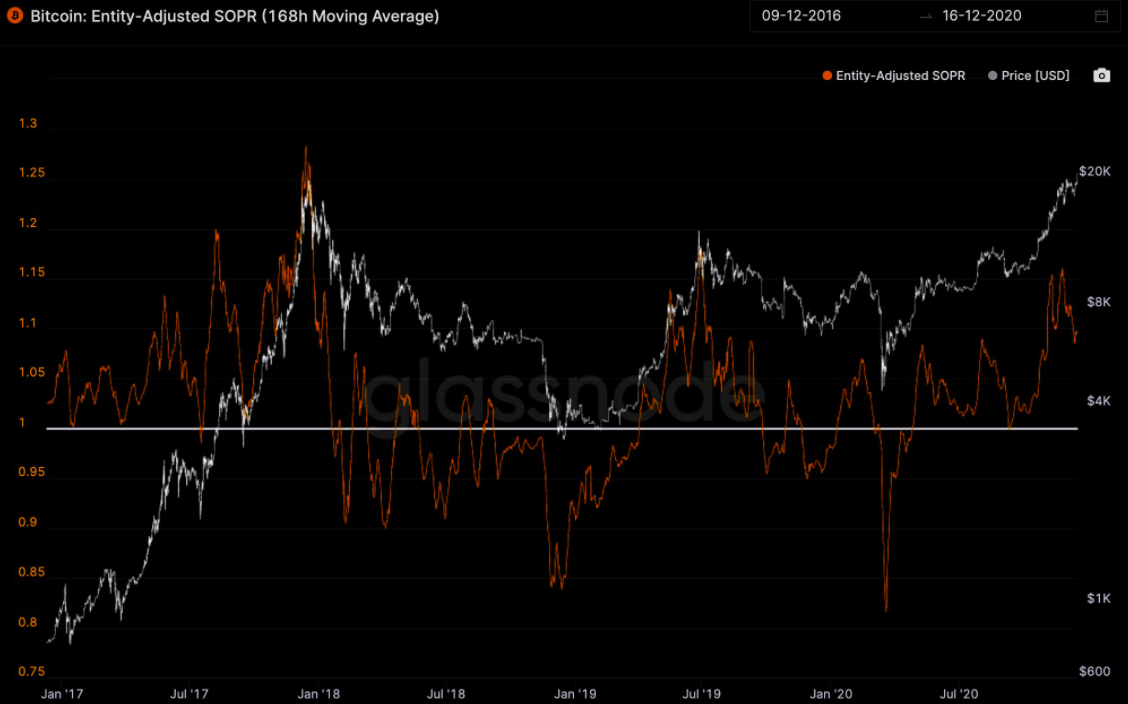 By studying the chart, Woo observed:

Far from resetting which means immense amounts of FOMO buying in the market right now, they overpowered profit takers and moved price upwards. That's not been seen before this early in the cycle.

Mark Newton, founder and president of Newton Advisors, told CNBC’s Trading Nation this week, that while Bitcoin may be enjoying a wonderful bull run, it may get paused in early 2021.

“It is still quite bullish on an intermediate-term basis given that it just broke out to new all-time highs. I think we have a ways to go. Near term, my cycle composite shows us peaking out in early January.” 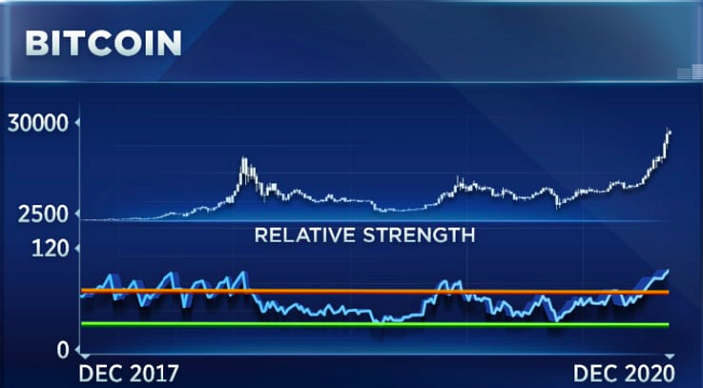 Fundstrat analyst and executive Tom Lee said in an interview with CNBC, that the weakening dollar will contribute to Bitcoin’s continuing price climb.

“First, Bitcoin’s got to be denominated in something. So if the dollar’s weakening, [and] Bitcoin holds its value, then Bitcoin goes up. But the more important effect is this year we did see a lot of central bank liquidity. The dollar was really strong, surprisingly, for much of the year, but its weakness now is going to make people think, ‘How do you keep a unit in sound money?’ A lot of people thought gold would be that store, and I think it still has a reasonable basis for someone to be long gold, but I think for younger folks and those who are in the digital generation, Bitcoin is that digital asset that they want to hold as a store of value.”

As per Lee, Bitcoin 2021 will outperform its bull run in 2020. However, he cautions that BTC is likely to lose value if the stock market corrects.

“We have to keep in mind Bitcoin’s holder base is still tiny. I don’t think there are even more than a million real people that own Bitcoin, compared to nearly a billion people that own other financial instruments. So it’s tiny – the penetration is one one-thousandth of where it should be… I think if we have a correction in stocks then Bitcoin’s going to fall, and it’s because a lot of the incremental buyers – if they’re in the US – may be using leverage or risk-on or risk appetite as a reason to add to Bitcoin, so it should actually be falling as stocks fall.”

Russ Mould, the investment director at brokerage AJ Bell, believes that both gold and Bitcoin are going to reach new highs in 2021. According to Mould, the main factors behind this growth is going to be Bitcoin’s fixed supply of 21 million tokens and gold's 2% per year supply growth.

"Some will argue that there is more to come from both gold and bitcoin, especially if governments keep piling up debts and central banks do their best to fund that borrowing through the backdoor with quantitative easing, zero interest rates and bond yield manipulation, thanks to their scarcity value relative to cash."

We’ll be sharing the top Bitcoin price prediction for 2021. we’re taking a look at BTC to find out what the experts have to say about its future performance and how much will Bitcoin be worth in 2021 and beyond.

Let’s take a look at some Bitcoin (BTC) expert predictions over the next coming years:

Conclusion – Looking Forward To An Optimistic Bitcoin Price in 2021

We at Trading Education believe that Bitcoin could be priced around $50,000 by 2021. We feel that the price will likely go through a short-term correction since the asset is heavily overpriced (as of writing, BTC has dropped from $33,000 to $29,500 over the last two hours). However, this correction is like going to be a short-term one.

The $24,000 support level is likely going to be tested, but we don’t think the price of Bitcoin will break below this any time soon. Ideally speaking, the buyers should gain momentum over the next week to break above the $33,000 and $34,500 psychological barriers. By flipping these two levels from resistance to support, the price should enter the $40,000 and the $50,000 levels.

The Ultimate Beginner’s Guide to Investing in BTC

Invest in Bitcoin: What Will Drive the Bitcoin Price In 2021?

What Is Bitcoin And Is It Worth Investing In Bitcoin In 2021?

Pros and Cons of Investing in Bitcoin, Will It Be a Millionaire Maker?