7 Facts About Shiba Inu That Will Surprise You

If you like Shiba Inu, here are the facts about it that you could find surprising


Shiba Inu (SHIB) has started rising again after the sluggish performance for most of 2021. As bulls take control in April and cryptocurrencies increase in value, Shiba Inu is a crypto to watch.

If you are just hearing about Shiba Inu, the second largest meme coin? Below are some surprising facts about SHIB.

1. Shiba Inu's Original Goal Was To Take On Dogecoin

Shiba Coin was designed to catch the FOMO growing around Dogecoin in 2020. Shiba is related to DOGE in many ways, including the use of a dog logo. The dog breeds used by the two cryptocurrencies are actually similar in real-life, with a few differences in their traits. The motivations behind Shiba Inu's start are most evident in its marketing. Since it started, Shiba Inu has nicknamed itself the Dogecoin killer.

The founder of Shiba Inu Coin is an anonymous person who goes by Ryoshi. Ryoshi claims that Shiba Inu is fully community-driven and has lots of sentimental value for its backers. The Shiba Inu founder or founders are also quite humorous and are behind the phrase "Dogecoin Killer" in reference to Shiba Inu's potential to dethrone Dogecoin.

3. Shiba Inu Has The Support Of Elon Musk

Elon Musk is a highly influential figure in crypto, and his words literally move the market. His support of Dogecoin triggered the meme coin rally of 2020. His sentiments about Bitcoin triggered an abrupt ending to the cryptocurrency bull rally of 2021.

With such a considerable influence, it is interesting to know that Elon Musk is a big supporter of Shiba Inu. A while back, Musk said he was interested in owning a Shiba pup and triggered a rally in the price of Shiba Inu. Shiba Inu shot up 300% as FOMO built around the news.

When it comes to Shiba Inu, the popular perception is that it is nothing more than a meme coin trying to ride the Dogecoin wave. However, Shiba Inu is a lot more than that and is easily one of the few cryptos in the entire market that have some real utility. Through its Shibaswap DEX, the Shiba Inu team has created a platform where users can trade crypto while retaining full control of their keys. While it's meme coins that are mostly trading on this platform at the moment, usage can be expected to grow over time.

Besides the DEX, Shiba Inu has its Metaverse. Details of this Metaverse include the fact that there are 100,000 pieces of virtual land, which will be priced in Ether. The Shiba Inu Metaverse lands will be categorized into four parts: Silver Fur, Gold Tail, Platinum Paw, and Diamond Teeth. These lands are being priced at between 0.1 ETH and 0.2 ETH. With the Metaverse being one of the most significant growth areas for cryptocurrencies at the moment, Shiba Inu's prospects look good.

These developments point to Shiba Inu as one of the most exciting cryptocurrencies with real utility and growth potential.

5. The Meme Coin Has Lots Of Celebrity Supporters

Celebrities have a lot of influence and can play a role in a cryptocurrency's value. Shiba Inu is one of the cryptocurrencies that have many top-tier celebrity supporters, and most of them bought it in 2021. For instance, rappers Meek Mill and Snoop Dogg both bought Shiba Inu in 2021 and triggered a rally in the price. We also saw Soulja Boy's love for Shiba Coin on Twitter. While celebrity endorsements are not everything in crypto, Shiba Inu's many top celebrity buyers are quite a surprise given that it is a relatively new cryptocurrency and a meme coin.

Shiba Inu was launched in August 2021 but became one of the most profitable and popular cryptos for traders. While the Dogecoin rally was one of the factors, it was not the only factor. In fact, the most surprising fact about Shiba Inu is that Chinese influencers may have been the biggest driver behind the massive rise in popularity of the Shiba Inu token.

One of the influencers that drove this rally was Charles Xi Biqun. Known as one of China's most influential people, Charles Xu Biqun had a significant influence on Shiba Coin and helped it emerge as a top trending cryptocurrency in China. He posted about SHIB on Weibo - an account where he has over 12 million followers. The FOMO that created around SHIB had a ripple effect globally and made SHIB one of the best-performing assets of 2021.

7. Shiba Inu Is One Of The Best Performing Assets Ever

One of the most surprising facts about Shiba Inu is that it is easily one of the best-performing assets ever – crypto or otherwise. Shiba Inu was launched in August of 2020, and by November 2021, it had recorded gains upwards of 48,000,000%. In perspective, just $100 put in Shiba Inu back in December 2020 was worth north of $40 million by November 2021. Such returns in such a short time make Shiba Inu a rarity in terms of ROI, one that has also created many cryptocurrency billionaires. Today, Shiba Inu is listed in most top cryptocurrency exchanges and continues to draw in investors who believe it can make them rich.

Cryptocurrency investments are high risk, and you should only put in what you are willing to lose. They are highly volatile, and more price declines of up to 20% are commonplace. Shiba Inu, being a meme coin, is even more prone to volatility. If you are looking to buy Shiba Inu, you need to have a long-term view of 5 to 10 years.

If these fun facts have tempted you to dip your toes into Shiba Inu waters, check out eToro is the best place to invest in Ethereum.

Open an account with eToro, deposit some funds with USD, and finally – buy Shiba Inu from just $10. 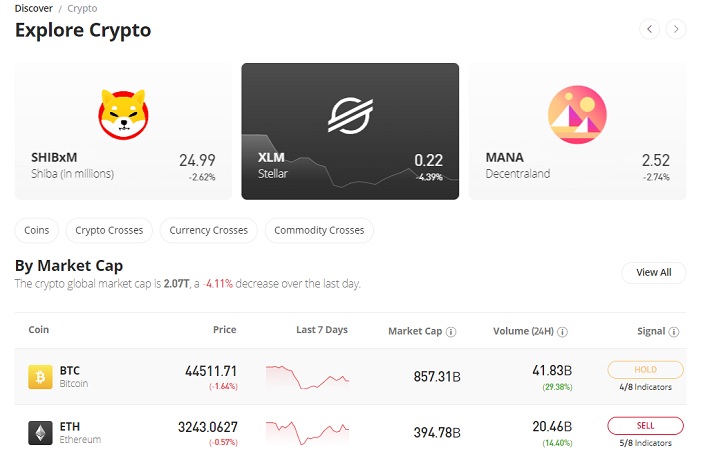 How To Make (Or Lose) Money With Shiba Inu

Why Do Shiba Inu Coins Have Value?

Is Shiba Inu Safe To Invest In?