Expert Forecast for GBP/USD in 2021

Pounds to Dollar price predictions for 2021

The GBP/USD pairing is widely acknowledged as among the busiest and the most popular currency pairs in forex history. The Cable, as the pair is widely known, is based on the 19th century background of the use of undersea transatlantic cables that helped relay messages for its trade.

As we take a look at where the GBP/USD is headed in the turbulence of 2021, it would be relevant to examine how this all-important currency pair has performed in the past.

Historical Aspects of the GBP/USD Currency Pair Over the Years

Historically, the British Pound Sterling has always been the stronger currency vis-à-vis the US Dollar. Till the 1970s, the British government had a free hand at setting the price levels for the currency pair. In 1971, a free-floating system for the rates was initiated.

This was a watershed decision that allowed the market to dictate the price that had, till then and throughout the 1800s and the better part of 1900s, seen the levels at $5 for every £1. Before the eventual free trading, there were devaluations in the 1940s to $4 and, later, in the 1960s too.

To summarise, the GBP has dropped value against the USD to almost 50% of its high in the last half a century. From buoyancy and a resultant peak in the 70s to shakiness and an eventual nadir in the 80s, the GBP has seen its share of highs and lows. The volatility of the past is now contained but the defining events in the last few decades have led to unpredictability. Geopolitical developments, natural calamities and, most recently, the havoc being wrought by the COVID19 pandemic have affected the rates.

So what does the year 2021 hold in store for the GBP/USD currency pair and what can traders and forex watchers expect to see this year? It is, frankly, difficult to even size up the global situation as the world is going through an unprecedented medical emergency that has affected all economic activity.

In the absence of any sign of improvement in trade and commerce and a slowdown in consumption and manufacturing, it is hard to form an educated view of currency movements. Surely, at a fundamental and a long-term level, we could take a positive view on nations as developed as the US and Great Britain and their historically stable currencies. But in the short term, it will be tricky to guess the rates.

When it comes to price prediction and forecasting, what does really come into play? Does a surge or a blip in one currency reflect on its strength or weakness alone? Let us consider the 1985 low of $1.054 that the GBP touched. This slump was less on account of the USD being in a stronger position than the GBP doing badly.

In the 1980s, when oil prices shot up and created an inflationary situation, the US Federal Reserve had to intervene with remedial measures. They increased interest rates to over 20%. The result was a spike in the inflow of international capital that boosted the prospects of the US economy. The valuation of the US Dollar took a favourable turn and it recorded its best ever performance against the GBP.

Hence, unlike the case of an individual stock, the valuation of a currency pair will be dependent on not just what impacts one but both.

But mostly, as with any currency pair, the performance of the GBP/USD also is mostly reliant on the well being of the respective economies, i.e., the British and the US. But there are other socio-political factors that are just as important and relevant. These range from geopolitical developments like the BREXIT and political events like the US elections, both of which have had strong and impactful influences on the forex market in recent months.

Another factor that has had a major impact on the pair’s price movement is the monetary policy released by the respective central banks. The Bank of England has a monthly interest rate review while its American counterpart, the US Federal Reserve, reviews interest rates 8 times in a year.

In 2020, as per the US Dollar Index, the USD had weakened from a strong 103 level in March to a low of 90. This could be largely due to the economic impact of the pandemic and the COVID19 stimulus package that led to a rate cut by the Federal Reserve. Some other economies such as Australia did not have a severe slowdown. That put added pressure on the USD.

BREXIT was handled on the back of mostly favourable negotiations, the GBP crossed that hurdle. However, COVID19 and the new variants thwarted a sustained recovery. Sure, even without a full-blown pandemic having slowed down the economy, the post-BREXIT times would have been difficult. Even with a weak US economy the GBP fell against the USD initially before recovering some ground later in the year. 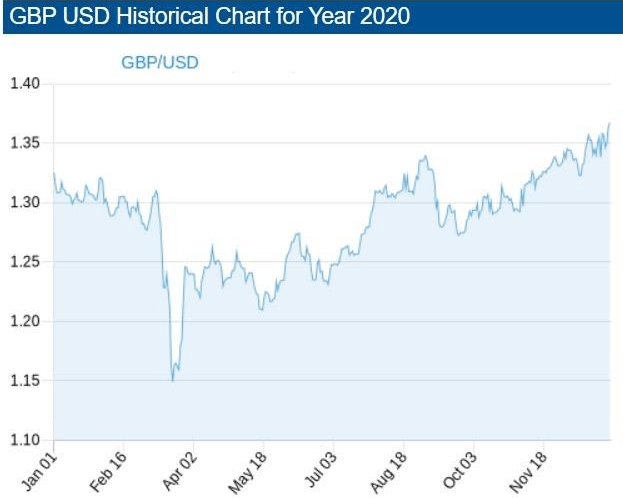 The Impact and Repercussion of COVID19 on the GBP/USD Prices

Evidently, the COVID19 has wrought havoc all over the world and crippled global economies. The US and the UK have been at the forefront of the impact of this devastating virus breakout, with the US leading the case numbers and deaths. The United Kingdom too has had struggled with its impact and has had strict lockdowns.

What has happened here is a near paralysis of the two economies in question. Understandably, one of the first casualties, when there is a severe economic impact, is the national currency. Both the USD and the GBP have had their fair share of volatility in the forex markets.

In 2020, a year ravaged by the COVID19 pandemic that brought the global economy to a virtual standstill, the British pound sterling to the US Dollar pair was particularly volatile.

2020 also saw two seminal events that were bound to have a heavy impact on the currency pair. One, the implementation of the BREXIT and its ramifications were unprecedented and shook the GBP. Two, the US Presidential election had a sharp effect on the US Dollar.

Incidentally, after the US presidential election, the GBP saw an uptick by almost 4 per cent in early November.

The uncertainty revolving around the BREXIT took a toll on the major British economic indicators and certainly on the forex stage as well. It resulted in the GBP taking a significant fall of 13% against the USD

There was worse to come on the COVID19 front. Of course, the pandemic had hit every nation in the globe but it was severe in Britain. The lockdown that followed meant nearly all economic and retail activity came to a standstill. There were job losses and pressure on the GDP. GBP/USD plummeted when the UK PM had announced another lockdown in January 2021.

The GBP/USD recovered following news that the UK would be the first country to approve the vaccine developed by Oxford University and AstraZeneca.

While the United States was the country that was impacted the most worldwide and the situation was worse on the economic front, USD did not fare as poorly as the GBP. It could be attributed to the US Dollar’s reputation to be a safer and a steadier currency.

Expert Forecast for GBP/USD in 2021

Possibilities that the GBP will remain weak in 2021

Some experts believe that the chances of the GBP strengthening are not high. If anything, it will probably hold its ground. The reasons cited for the GBP/USD not looking optimistic are:

Possibilities that the GBP will strengthen in 2021

If the job and income support schemes for businesses and job seekers continue and the economy starts bouncing back in the third or fourth quarter GBP may strengthen.

Possibilities that the USD will strengthen in 2021

The US elections are over and a stable government is in place. The Coronavirus has dealt a severe blow to America but the $1.90 trillion stimulus package holds out hope. Also, the vaccine rollout has been happening as planned. An increase in the interest rates by the Central bank can be a big boost for the USD.

The rest of the world too is struggling with the pandemic and may not afford such large financial stimuli and have to resort to interest rate cuts. A key trading partner, China, is now relatively less impacted by the virus and thus Chinese economy may grow substantially. That could mean more US exports to China aiding a recovery in the US.

The pound to dollar forecast charts hold some bullishness ahead in 2021.

But going by the performance on the yearly chart, there is a trend that has emerged over the last two decades. Between the lows of 2001 and the highs of 2007, an upward trend had formed with the GBP peaking at 2.1161. From 2007 began a long downward spiral with the GBP at 1.37 to the USD by the end 2020. The position improved with a peak of 1.41 towards February 22nd.

Analysts across the major banks like Commerzbank, Citibank, BNP Paribas and ING expect the pound to dollar rate to be around the 1.37 to 1.40 mark in 2021.

In any financial market, whether it is the stock or commodities or the forex market, predictions can be extremely difficult. There are far too many variables at play and the complex equations involved makes forecasts quite challenging.

Finding The Best Forex Signal Provider For Your Needs

The Risks of Forex Trading

How to Start Making a Profit With Forex Trading