The sterling pound is one of the most popular currencies for forex traders. The GBP/USD pair is particularly loved for its high liquidity and volatility.

With such popularity, most traders are always looking for dollar-sterling pound price predictions.

For this reason, we have done in-depth GBP/USD price forecasts. Our forecasts can give you an idea of how the sterling pound could trade in the coming years.

Below are some of our forecasts for the Pound Sterling versus the USD in 2022 and coming years:

Looking to trade the GBP/USD? eToro is one of the best forex trading brokers known for its tight spreads and low fees.

Since November 2007, the Sterling Pound has been downtrend against the Dollar. At the time, the GBP/USD was trading at 2.11231. The price drop has accelerated in 2022, and the Pound Sterling-v-USD is currently trading at 1.08244.

Let’s now look at some key factors that have contributed to the GBP/USD price action since 2007 and how they can help make a Sterling Pound price prediction for 2022 to 2025.

At the start of 2007, the Sterling Pound was trading twice the USD value. However, the GBP started dropping against the Dollar in December 2007 and accelerated throughout 2008. The reversal of the Sterling Pound’s fortunes in 2008 can be attributed to a flight to safety by investors after the collapse of the financial system in 2008.

After the financial crisis of 2008, world governments took measures to restore the global economy. This helped trim the appetite for safety that had gripped the markets at the height of the crisis towards the end of 2008.

The Sterling Pound remained stable against the United States Dollar until 2014 when The Pound started dropping heavily against the USD. This followed, an increased level of uncertainty in British politics.

It was in 2014 that Gordon Brown resigned as Prime Minister, and UKIP, a far-right party gained major ground in the European elections. Amidst this turbulence in the local British politics, Russia invaded Crimea, further creating uncertainty.

A combination of local politics and international uncertainty saw investors seek safety in the Dollar, leading to a slide in the Sterling Pound. By 2014, the GBP was trading at 1.54896 against the USD.

After the political turbulence of 2014 came the general election of 2015. While many analysts expected a hung parliament, the Conservatives won by a huge majority. This increased the prospects for Brexit and led the Sterling Pound to keep sliding in 2015. By the end of 2015, GBP/USD was trading at 1.14189.

The Pound continued its 2015 slide in 2016 as uncertainties in British politics saw investors prefer the USD. The Sterling Pound slide accelerated in June 2016 after the Brexit Referendum, where citizens voted to leave the European Union. This was also a turbulent period politically as Prime Minister David Cameron resigned.

After the Brexit vote, the Sterling Pound dropped sharply against the Dollar, and the Bank of England moved to intervene. They raised interest rates, which saw the GBP reverse its waning fortunes. The Sterling Pound kept going up from late 2016 to 2018. By January 2018, the GBP/USD was trading at 1.43548.

While the hike in interest rates saw the British Pound do well in 2017, the slow implementation of Brexit saw investors take a cautious approach to the British economy. This helped prop up the Dollar, as the U.S. economy was growing strongly amidst the Brexit crisis in the U.K.

The COVID-19 crisis ravages the U.S.

In June 2020, the GBP/USD rallied. This followed the chaotic handling of the COVID-19 crisis in the U.S. At the same time, the Bank of England announced that it could maintain interest rates at 0.1% and that it would continue asset purchases, backed by another GBP 100 billion in reserves. This saw the GBP rally against the USD at the height of the COVID-19 pandemic.

While the Sterling Pound rallied against the Dollar in late 2020 and most of 2021, the Dollar has strengthened against the GBP and other world currencies for the better part of 2022. This followed the war in Ukraine, which disrupted the world economy. The disruption has seen investors flee to the Dollar for safety.

Besides the USD standing as a safe haven currency, the Federal Reserve has aggressively raised interest rates. This has made the U.S. Dollar even more attractive as an investment and has significantly impacted the Sterling Pound.

The move to drastically cut taxes in the U.K. has also created jitters amongst investors. All this, while uncertainties in the global economy continue to see investors flock to the Dollar for safety.

The charts also paint a picture of the Sterling Pound potentially weakening for the remainder of the year. 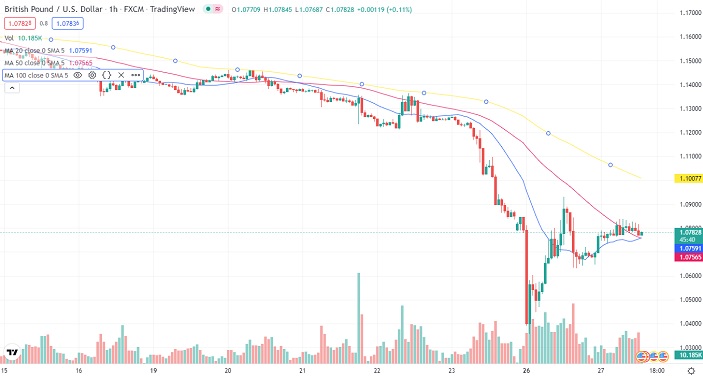 After a minor rally on September 26th, 2022, the GBP struggles around the 1.07775 resistance on the 50-day Moving Average. If bulls fail at this support level and the GBP breaks the September low of 1.03589, then the Sterling Pound could be in red for the remainder of the year and possibly end the year at 1.00876 or lower.

The war in Ukraine has severely dented prospects of global economic growth in the short term. This means that investors are likely to keep moving toward the Dollar as they wait for things to clear up.

At the same time, with the U.S. Federal Reserve pointing to potentially more interest rate hikes until inflation is under control, the U.S. Dollar is likely to remain a strong asset and could see the Sterling Pound drop against it for the better part of 2023.

At the same time, the odds are that by 2025, the world economy will have overcome most of the issues it is dealing with today. This means the current rush to the USD as a safe haven asset may not be there in 2025. This could further help propel the Sterling Pound, hence the GBP 2025 price prediction of 1.3500 or even higher.

Despite its current slide in value, the Sterling Pound is expected to remain one of the most relevant fiat currencies globally for many years to come.

Once the world economy stabilizes and the British government’s gamble with drastically slashing taxes pays off, the GBP could make gains against the dollar long term.

For traders interested in the GBP/USD trading pair, below are some of the potential highs and lows of the Pound v Dollar between now and 2025.

What Drives The Price Of The Sterling Pound?

Whenever the inflation rate is high in any given country, the currency tends to depreciate relative to countries with low inflation levels. One of the key measures of inflation and consumers’ ability to buy goods and services is the Consumer Price Index.

One of the most important factors that anyone looking to do a GBP price forecast should consider are the policies of the Bank of England, especially the Bank Rate. The Bank uses monetary policies to keep inflation at acceptable levels at any given moment.

Whenever inflation is high, the Bank of England raises the bank rate to cut the number of pounds flowing into the economy. This results in speculation that the GBP will do well against the Dollar and other currencies.

Another factor that helps determine the direction of the Sterling Pound is surveys on the direction of the economy. Whenever sentiment shows that the U.K. economy is doing well or is about to start doing well, the GBP tends to increase in value relative to the USD and other currencies. The reverse is also true. When economic forecasts show that the U.K. economy could be in trouble or headed into trouble, the GBP tends to fall against the USD.

Among the key sentiment reports that analysts use to measure confidence in the economy is the Nationwide Confidence Index (NCCI) report. Another of these reports is the Gfk, which indicates how the citizenry expects the economy to perform one year ahead.

These reports show how much a country exports relative to its imports. When the balance of payments shows a surplus, it usually indicates that more capital is coming into the country than is leaving. This means more demand for the local currency. The reverse also holds.

Where To Trade GBP/USD

We have reviewed multiple brokers where you can trade GBP/USD. From our analysis, we believe that eToro is the best broker you can use. eToro is known for its tight spreads, low commissions, and copy trading features for new traders.

Besides, the minimum you need for you to start trading the Sterling Pound on eToro is relatively low. You can deposit $50 on eToro and trade for as low as $10. eToro also offers multiple deposit methods, including e-wallets such as PayPal, Skrill, and Neteller.

Your money is also pretty safe with eToro. That’s because it is one of the few brokers that are regulated across multiple jurisdictions. eToro is regulated by the FCA in the UK, CySEC in Cyprus, the SEC in the U.S., and the Australian Securities and Investment Commission (ASIC).

This GBP/USD price forecast shows that the Sterling Pound could keep losing value against the U.S. Dollar in the short term. Multiple fundamental factors, most notably the Dollar’s safety in turbulent times, give the USD an edge.

If you want to trade GBP/USD, we highly recommend eToro. It’s a regulated broker with all the tools you need to become a successful trader.

What is the price of GBP/USD?

How To Identify Trading Trends in Forex Market

Why Should Traders Read Analysis Reports?

What Are The Best Forms Of Forex Analysis?

How To Analyse Candlestick Chart Patterns