The financial world seems to have a bottomless hunger for cryptocurrencies. Even though there is already a multitude of them, new projects seem to be finding success faster than the pioneers like Bitcoin did.

The latest addition to the crypto space is Internet Computer, a cryptocurrency that quickly became popular and highly valuable. Just within a month of its debut, ICP shot into the top ten to join ranks with mainstream coins like Bitcoin and Ethereum.

After three days of launching, ICP was already trading at $289 with a market value of $35.8 billion.

One of the reasons why Internet Computer became popular so quickly is because of its unique model. The crypto is vastly different from the majority of what we are used to, making it not only unique but also in demand.

But what exactly is Internet Computer, and why did it become popular so quickly? In this guide, we are going to go through some expert ICP price predictions in order to understand its future price movement and whether you should invest in it.

What is Internet Computer?

Internet Computer (ICP) is an open-source cryptocurrency protocol for creating websites, apps and a series of other web-based services. The project is developed by Dfinity and has the backing of high-profile venture capital firms like Polychain Capital and Andreesen Horowitz.

According to its founders, Internet Computer aims to create a more decentralized version of the web and make it easier for people to create software without depending on hosting providers like Google and Amazon Web Services (AWS).

So instead of hosting, say your website, on an AWS server, Internet Computer allows you to develop and host it on a network of computers around the world.

Today’s internet is controlled by a few major companies, which means that large amounts of data are entrusted to a few entities. Internet Computers tries to phase out this crisis by decentralizing web services.

The Interner Computer protocol boasts of limitless scalability potential, which means that it can host a large number of applications without crumbling.

But how exactly does it work?

Well, the project is built on its own protocol known as Internet Computer Protocol (ICP). This protocol combines the computing powers of a network of computer nodes to create a unified computing platform that can support a limitless number of applications.

These include websites, DeFi projects, or even tokenized social media.

Read Also: Is Internet Computer A Good Investment And Should I Invest in ICP?

Internet Computer in 2021: Everything You Should Know

Internet Computer has its roots a few years back, but it was officially launched in May 2021 and quickly picked up momentum to become one of the most valuable cryptocurrencies.

Although ICP saw a huge drop after jumping to its current all-time high, it seems to be recovering and might soon be on an uptrend.

Already there are a number of technical developments to make the platform more efficient. Recently, DFINITY Foundation reported that it was launching an open-source ledger and governance toolkit known as Quill.

Apart from these technical advancements, ICP has also had a dramatic price movement in 2021. The token started trading around May and quickly went above $500 within the first few days.

However, after the initial bull run, the price dropped and has encountered major resistance leading to a majorly drudgy growth.

Hopefully, according to several price analysts, the ICP price will look up again, especially if it comes across an effective catalyst. From the predictions we have seen, there is a good possibility that the token to be trading at a higher price by the end of 2022.

To get a good picture of exactly where Internet Computer has come from, let’s quickly review its price history.

ICP is a fourth-generation cryptocurrency that was launched in 2021. For this reason, we will not be looking at a long history of price data like we usually do with the more established cryptocurrencies.

But even with its short stay in the market, Internet Computer has had an interesting price movement as is shown on the graph below. 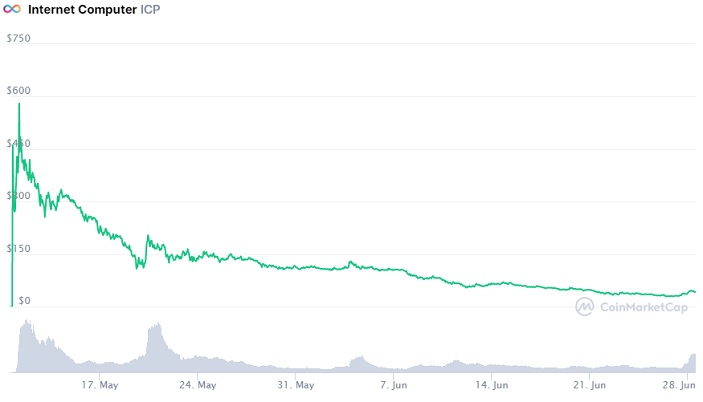 From the graph, we can see that the first few days were pretty busy for Internet Computer. The token surprisingly shot from as low as $0.00000001 to over $600 on the first day. This was an exciting surge, and most price analysts were watching carefully to see where the price would go next.

Of course, several analysts predicted a drop based on the histories of other cryptocurrencies that had huge first-day leaps. True to their word, the price fell by more than half within a few hours of going over $600.

Just as quickly, Internet Computer recovered and went over $500. However, the recovery was short-lived, and soon another correction came and send it below $300 again.

As you can see from the graph, the first few days were laden with wild price swings. After that, there has been a long consolidation period with the price showing little action.

June was even duller. Although Internet Computer started trading at above $100 in June, it recorded a slow but persistent drop. On June 7th, it went below $100 per token and was trading at around $93 in the early hours of the morning.

The downtrend continued, and by June 9th, ICP was playing below $80. And even though most analysts predicted that the price would rise again, by the end of June it was still stuck to the bearish momentum and trading at around $36, according to CoinMarketCap. By November it had risen to $46.67, still 93.67% under its all-time high. ICP Started 2022 with a price of $19.14.

Check Out: Could Internet Computer Be A Millionaire-Maker Coin?

Internet Computer Price Predictions for 2022 to 2023

Most price analysts are still not enthusiastic about the future of Internet Computer ICP, even in 2022 or 2023. Wallet Investor, for instance, continues with its bearish prediction in 2022. The price analyst still believes that ICP will trade at the $60 level from January to February 2022.

After mid-March ICP's price will start dropping and the coin will end the year at $4.47.

The predictions are even worse in 2023, where Wallet Investor predicts the price of Internet Computer will start the year at $4.3 and end it trading for $3.8.

Although Long Forecast doesn’t see much growth in 2022, it brings a fresh breath of relief from Wallet Investor’s disappointing predictions. The site still sees a decline in ICP prices, but smaller. The Internet Computer token will end 2022 at $8.09.

Read More: Pros and Cons of Investing in Internet Computer

Internet Computer Price Predictions for 2024 to 2025 and Beyond

Internet Computer has previously shown high levels of volatility, and this can be shown by the widely differing price predictions. While we have a shot at predicting some close numbers for the rest of 2022, 2024 and 2025 might be a bit tricky.

However, for the sake of giving you an idea of price direction, we are going to share some of the predictions we have seen for 2024 and 2025.

Wallet Investor is still not shying away from its bearish predictions, though it predicts growth in ICP's price. The token will start 2024 trading at $3.6, rise briefly to $4 end the year at $1.5.

Trading Beasts is again more bullish and predicts that Internet Computer ICP will trade at around $87.10 at the start of 2024 and then take on an upward momentum to $98.68 by the end of 2024.

The Future of Internet Computer: Will the Price Rise Again?

While the future of Internet Computer might look bleak from the perspective of its price movement and volatility, there is a real demand for its underlying technology.

First of all, to understand whether or not the price of Internet Computer ICP will rise again, it is important to first understand what is causing the price to fall.

As you already know, ICP’s first days of trading were glamorous, with the price shooting above $600 on the first day. However, since the start of June 2021, the price has been falling and is now humbling below $40.

But what exactly is causing this unfortunate slump? You might want to read this carefully.

You see, while ICP started trading in May 2021, the protocol had been in development since 2016. So, before ICP was opened up to the general public, some investors were already investing in the project.

So, when the token was released, there was already a demand for it. This, coupled with market hype, and investor enthusiasm, caused the price to shoot above $600 on the first day of trading.

Now, here is the most interesting part:

When ICP was released to the public, half of the tokens in supply were kept by the creators, while a good chunk was also given to its early investors. Each month, there is a fixed supply of ICP tokens that are released into the market.

So, every month, the supply increase, which consequently dilutes demand, causing the price to go down.

But will the value of ICP rise again? That is the most common question investors are asking right now.

Well, as we have seen from the predictions above, there is hope that the price of ICP might rise again. While we can’t pinpoint the exact number or where the current downtrend will break, we are confident that we might see a much higher number by the end of the year and the years to follow.

The team behind ICP is also working tirelessly to ensure that they return back to their glory days and win back investor interest. We are hopeful that things will finally look up, but all we can do now is sit back and wait.

In the meantime, we have to ask ourselves one of the most important questions; is ICP still a good investment despite all these challenges?

The recent Internet Computer ICP slump bashed the hopes of investors, and now many people are wondering if it is a good investment. Internet Computer’s underlying technology is a great concept and might have a great future in the cryptocurrency industry.

However, the price has recently run into a troublesome trajectory, and most predictions have turned pessimistic. So, should you still invest in ICP?

There are two ways to look at this:

One, if you are looking for direct monetary value; that is, if you want to hold or trade, you might have to be a bit patient. This is especially true for people who are looking to hodl. With the price going down, you might want to wait just in case it slumps any further and then buy and hope that the market looks up again.

Hodling will only work out if the price rises again after you buy. You can see that people who bought when the price was, say, above $400, are now holding their breaths and hoping for an uptrend soon enough.

You might have a better shot at trading since you can take advantage of both price drops and uptrends with CFD trading.

The second way to benefit from Internet Computer is by investing in its underlying technology; the Internet Computer Protocol. From this perspective, ICP seems to have a brighter future since the concept it presents is actually in demand now after many years of people trying to decentralize the web.

So, depending on how you want to go about it, Internet Computer can be profitable right now or not. If you are want to hold, you can buy now, but you might have to wait for several years before you can sell.

Bottom line, take some time and weigh your options before you start investing in Internet Computer. Cryptocurrency investing is very risky, and you want might want to be careful about it. Do enough research and ensure that you don’t invest more than you can afford to lose.