Is Bitcoin A Good Investment?

Bitcoin (BTC) crossed a huge milestone in February by climbing above $58,000 for the first time. Although it’s great news for investors, it may be the start of a strong discussion by various financial authorities on how it can be regulated.

There has never been a great time to monitor Bitcoin (BTC) and the whole crypto investment landscape than in 2021 and particularly the month of February. On Tuesday, February 16, due to heavy demand by investors (novice and experts), the crypto currency was able to break off its previous milestone of $40,000 in January and crossed $50,000. In the late morning hours of Friday, February 21, Bitcoin was trading between $57,500 and $58,000. The current rally means that in less than two months, the crypto asset has more than doubled in value.

Bitcoin was created by a man who is known by the pseudonym “Satoshi Nakamoto'' to spearhead the new form of currency which would directly compete with fiat currencies (Euro, Pound, US Dollar, Australian Dollar, New Zealand Dollar, South African Rand and Japanese Yen) following the 2008 financial crisis and 2009 crash of the housing market.

Mr Nakamoto created the crypto asset with a view of eliminating the middleman (financial institutions). It uses a decentralized ledger system which is known as blockchain.

Bitcoin is the most popular cryptocurrency and has the largest market cap as of February 2021 in the crypto space which stands above $1 Trillion. Such numbers are quite astonishing for an asset that looked like it was heading into extinction mode during the peak of the pandemic which brought the financial markets to its knees in the month of March 2020.

Bitcoin (BTC) at the time experienced a huge sell-off by investors which according to Paul Vigna of Wall Street Journal “was twice the size of the plunge in stocks”. Evidently, the drop in price was heavily felt across brokerages and exchanges as the asset experienced a 52-week low particularly in the month of March when it traded for $3,800 which saw the asset’s trade volume decrease massively and the resultant effect was a drop in its market capitalization.

Simply put, people are buying and selling at whatever price they want as per their investment goals. This makes Bitcoin attractive to high growth investors as a $10,000 investment in the month of September 2020 would have resulted in more than 400% profit in less than 6 months.

On the other hand, crypto is not conventional investing. As Danny Cox from Hargreaves Lansdown (a financial services company) puts it “cryptocurrencies could remain niche, vanish without a trace, become mainstream or anything in between. Any investment should be considered as very high risk”.

Do not pin all your hopes on one digital currency and in this case Bitcoin; diversify your portfolio so that you spread the risks among all your investments.

Bitcoin: Will It Be A Good Investment?

If we go by what the experts are saying, there is a huge chance BTC will be worth more than the current trading price  in the not-so-distant future which may make it a good investment in 2021.

The biggest driver of Bitcoin before the pandemic were its fans primarily growth investors who saw a possibility in the crypto asset becoming a mainstay in the finance stratosphere. After the pandemic, the asset was trading at a price ($3800) that was in the risk level of novice and even expert investors who saw a great chance to shield their losses from other investments with the crypto.

Bitcoin has increased more than 150% from December 2020 and this time the main drivers are not skewed towards a single direction. There has been a huge influx of investors from large scale institutions such as university endowment funds, investment trusts and pension schemes which are of the belief that the asset is here to stay.

New investors believe that with time financial authorities will find a better way of regulating coins by identifying all loopholes and putting appropriate measures to shield the investments.

Ultimately, this was not the case during the crypto’s best bull run in 2017 when it rose to $19,783.21 on December 18, 2017 before suffering March lows during the peak of the pandemic. The only people who showed interest were retail investors who patronized it because it was not regulated by any central government and others who bought it based on The Fear of Missing Out. As a result of speculation about the possibility of making huge gains, certain individuals threw some money into it.

Ordinarily, people take investment decisions based on trust and in the money market the expert counsel of mainstream financial service corporations. JP Morgan has been a strong opposition to the use of BTC for a long time. In 2017, in an article by The Guardian, JP Morgan boss Jamie Dimon labeled “Bitcoin a fraud that will blow up”. In a twist of fortunes, the investment bank and financial services holding company has now backed the digital currency and “feels it could have a bright future”.

In a financial news article by BUSINESS INSIDER, JP Morgan’s investment experts reiterated that “Bitcoin could rally as high as $100,000”. In December 2020, Insurance giant MassMutual joined the BTC club with a $100m investment which was for its Insurance’s general investment account. The Insurance Company bought the crypto through New York Digital Investment Group (NYDIG) certifying the coin’s gradual appeal and presence in the financial world. Conservationist, philanthropist and hedge fund manager Paul Tudor Jones in the second quarter of 2020 purchased Bitcoin as a hedge against inflation as central banks around the globe started printing money and compared the digital coin to the gold trade in the 1970s.

As a result of not being regulated by any institution and remaining open to investors no matter where they find themselves on the face of the earth, the price fluctuation of the digital asset is not going to stop and so is its unpredictability.

Will Bitcoin Continue To Soar In 2021?

Bitcoin is gradually making waves into the financial mainstream and will rally based on the acceptance it receives from major players in the financial game who believe it is the modern currency of the future. Many Experts have agreed that the price of BTC will soar in 2021 due to a wave of money from both institutional and private investors.

The biggest news in the crypto investment landscape is the $1.5 billion investment in Bitcoin by Tesla Chief Executive Officer (CEO) Elon Musk who has been a huge advocate of the use of cryptocurrencies. Tesla as a company released a statement which reiterated their belief in the digital coin that “it was moving towards allowing customers to pay for its products with the cryptocurrency”.

Currently, bitcoin has obtained credible backing from several online payment systems. Popular among them are PayPal, Cash App and Skrill which allows customers to use their accounts to hold, buy and sell coins.

Another major player in the financial sector VISA announced in October 2020 that it plans on liaising with crypto exchange, Coinbase, to offer bitcoin-related debit and credit cards.

Several investors rely on futures to be able to make investment decisions. Economist Robert Shiller believes in the importance of futures and has even suggested that “the 2017 bubble may have been linked to the fact that there were no bitcoin futures at the time”. Bitcoin futures and options as well as blockchain related funds have gone a long way to provide a huge layer of security to investors who might otherwise have been afraid of volatility and the thought of losing some or all of their money. Futures help investors speculate on falling prices.

Don't Miss: Why Bitcoin Is Going To Explode In 2021

Bitcoin Price Prediction In 2021 And Beyond

Every price prediction made by individuals and experts alike BTC finds an incredible way to surpass it leaving many sellers in the dust as to why did I sell it? As Clem Chambers puts it, “the coin may be worth $1m someday or may drop down to the normal price levels many people expect to. This is because its price is being heavily influenced by personal FOMO and corporate FOMO and until that impulse passes, nobody can really determine the price of the digital asset”. 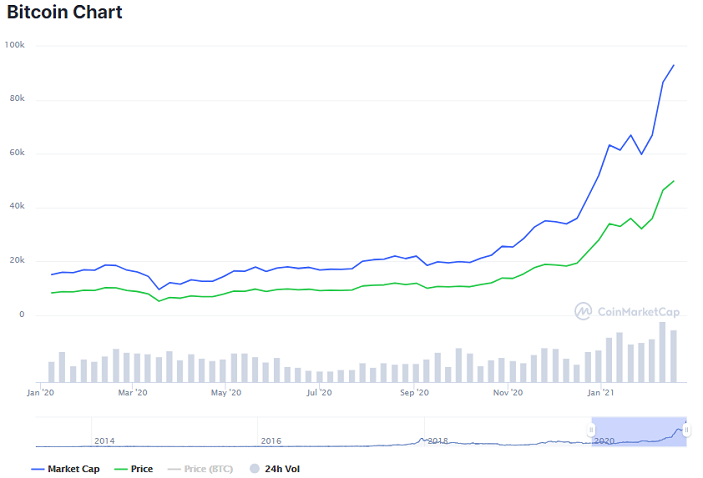 As it stands, each week of not investing in BTC and other coins looks like a great opportunity missed.

Read More: How Much Will Bitcoin Be Worth In 2021 And Beyond?

How Do I Invest In Bitcoin?

As cryptocurrencies become popular, there are several trading and exchanges where you can make investments. Based on experience and ease of use, eToro provides a great platform where you can buy Bitcoin.

SIGNING UP is the first step in setting up an account online. Ensure the authentic details are provided.

ACCOUNT VERIFICATION is the second step in the process. To ensure the security of your account and as part of KYC (Knowing Your Customer), you will be required to upload your driver’s license or passport) and proof of address to help with the confirmation of your identity.

DEPOSIT FIAT CURRENCY is the next step. Upon successfully going through the verification process, you can follow the instructions and deposit fiat currency (USD, GBP, and EURO) which is a necessary step to make a purchase of BTC possible.

The last step is MAKE YOUR FIRST BITCOIN PURCHASE. With funds in your account, simply navigate the “Bitcoin” page and your first purchase is on its way.

So, Is Bitcoin A Good Investment? Conclusion

Yes, it is a good investment. According to experts, Bitcoin will carry on for several years by being the most popular cryptocurrency as well as have the largest market cap. The rallying of the coin means that in the next few months if it maintains its momentum, it will be valued at $100,000 per coin and reach around $2 trillion in market capitalization.

The limitation in its supply capped at 21,000,000 by its creator has been highly essential to its success.

Big corporations such as AT&T, Expedia, PayPal, Shopify and Microsoft accept Bitcoin as payments. As more companies become open to adding the crypto onto their payment options, it will not only be popular but gain a cult status for its usage just as online payment platforms PayPal, Skrill, Neteller, Cash App and WebMoney provide more options of payments for customers.

5 Reasons Why Bitcoin Could Double Your Money In 2021