Is Dogecoin a Good Investment Opportunity in August 2021?

Dogecoin (DOGE) is in a huge correction from its all-time high of $0.73. Currently, it is trading at $0.17, and it is still trending lower. If its price action at the moment is anything to go by, then Dogecoin could be going lower in the short term. Major support is at $0.15, and if it fails, then $0.10 could be possible in the short term.

Despite starting off as a joke, Dogecoin is one of the most fundamentally strong cryptos in the market today.

One of its core strengths is its quick block times. It has a one-minute block time, a feat that is unrivalled by most blockchains in the market today. This makes it quite scalable, and practical for everyday payments. Fast block intervals give it a lot of potential for adoption, making it a high potential cryptocurrency.

Since Elon Musk made Dogecoin his favourite cryptocurrency, the developer team has come alive. They recently stated they were working on an update that would make Dogecoin more practical for use as a currency. The update would involve cutting down on fees when carrying out Dogecoin transactions. Given that Dogecoin already has some of the lowest fees in crypto, cutting them down further would add to its adoption long term.

The Tesla CEO commented on the upcoming update stating that while Bitcoin and Ethereum were looking into multiple layer solutions, layer one transactions still remained slow and expensive. He added that he saw lots of benefits to increasing transaction levels on the base layer while cutting costs.  Elon Musk talking about it is a big deal for many reasons, the most important one being Tesla possibly accepting it for payments.

Another strong point to Dogecoin is its decentralization. The project has a similar working mechanism to Bitcoin, albeit with a little twerk to the coin supply. This makes it one of the most secure cryptocurrencies in the market today.  When combined with the fact that the developer team is back and working on the project, this makes it one of the topmost fundamentally strong cryptos to buy now.

Against the background of these fundamentals, Dogecoin is well-positioned to retest the highs it made in April and early May. However, no one should be under any illusions that this will happen in the next few days, weeks, or even months. That’s because Dogecoin, like all cryptos, tends to move in tandem with the price of Bitcoin.

So far, Bitcoin remains in the red. While the $30k price level offers strong support at this point, there is no telling whether it can hold or not. Back in 2019, Bitcoin had found strong support at $6k, and it was widely assumed to be the bottom. However, at some point this support gave way, and Bitcoin tested $3k, before hitting its recent highs of $64k.

As such, the only time Dogecoin can be said to be back in the clear is when Bitcoin decisively bounces off the $30k support.

Don't Miss: Is It Worth Investing In Dogecoin?

The crypto market is still deep in the red and has the potential for further downside. This means August could not be the best time to buy Dogecoin (DOGE). The risk of more downside is still there, and it could be a while before Dogecoin sees a major upswing towards its all-time highs. 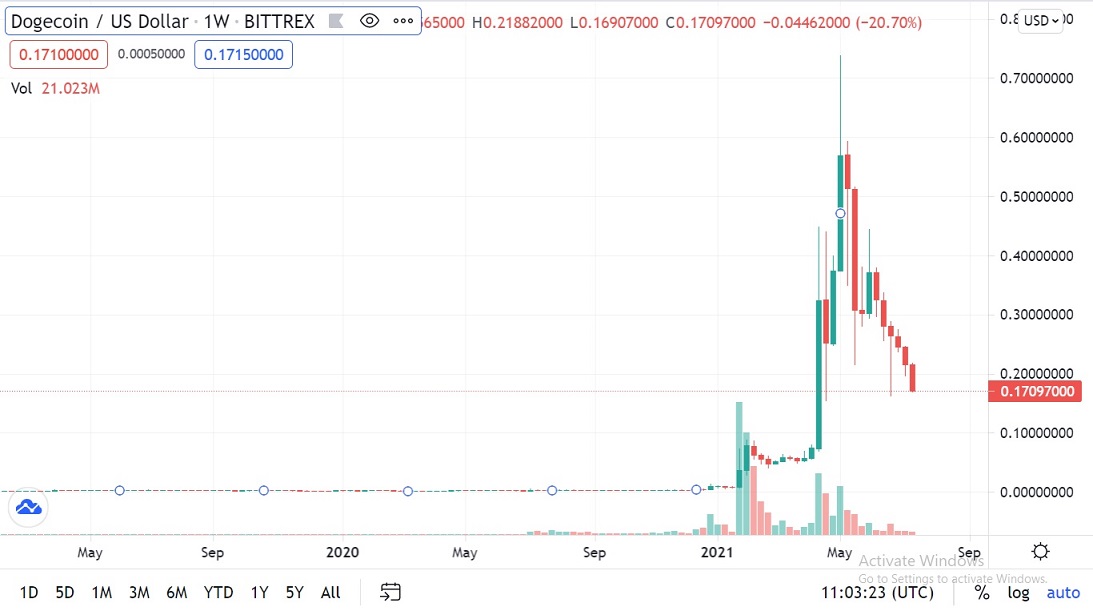 From a look at the weekly charts, Dogecoin is strongly bearish, and selling volumes are accelerating. If it breaks the $0.15 support, then the chances of it testing the 50-day moving average support at $0.10 would be quite high.

For Dogecoin to have a chance of testing its all-time highs in August, it would have to make a V-shaped recovery from its current prices. The uptrend would be confirmed if it breaks the $0.44 resistance. This seems highly unlikely to happen within the next few weeks, especially with Bitcoin still bearish, and no major bullish news coming up.

Simply put, Dogecoin is still flirting with major long-term support. The most likely scenario is one where Dogecoin enters a consolidation around this support for a month or two.

Up to this point, it is clear that Dogecoin is in a bear market. It has shed off a huge chunk of its value from its all-time highs of $0.75. However, there is a high chance that it has not hit the bottom.

That risk may not be linked to Dogecoin in itself, but the fact that the entire crypto market is bearish. Bitcoin, which is the key market mover has been in the red over the last two months. Volumes don’t seem to be high enough to give Bitcoin a strong bounce off this support. This means that there is a likelihood of more bearish momentum going into August. If this happens, Dogecoin could test lower prices.

However, Bitcoin aside, there is a good chance that the Dogecoin bottom is pretty close. There are lots of good news coming soon with regards to this crypto. One of them is a change to the protocol that will make Dogecoin transactions faster. This could play a role in its long-term adoption. In the short term, it is likely to create excitement in the market and positively impact the price.

Then there is the upcoming Doge-1 mission. This is SpaceX’s moon mission that SpaceX said would be funded in Doge. As the date for this mission approaches, so will the hype around Dogecoin. Therefore, for someone who wants to profit from the hype that will build up with the SpaceX mission, August is a pretty good time to buy Dogecoin.

Where To Buy Right Now

To invest in Dogecoin and be happy about it, you need a broker that has proven to be reliable and is cost-effective. The broker below is top-rated and is pretty safe to use.

eToro, easy to use, affordable, and used by over 13 million traders.

Why Dogecoin is So Cheap?

Will Dogecoin Make Me Rich In 10 Years?

How to Stake Dogecoin

8 Reasons Why You Should Invest In Dogecoin Today