Pros and Cons of Investing in Cardano, Will It Be a Millionaire Maker?

Pros and Cons of Investing in Cardano, Is it Good to Invest in Cardano?

Learn more about the pros and cons of investing in Cardano pushing you ahead to know if it is a good idea to invest in Cardano.

Cardano just might be the missing piece in your investment portfolio. Here’s why you might consider investing in Cardano, the pros and cons, and what exactly to look for.

Before investing in Cardano, it’s vital that you understand what it is that you’re getting into. Cardano is not just another form of cryptocurrency, like Ethereum or Bitcoin, but a new kind of decentralised blockchain-based platform.

So let’s learn more about Cardano - one of the leading cryptocurrencies worth watching this year. But what is Cardano in the first place?

Before we analyse the benefits and downsides of holding and investing in Cardano, we should explain more about the actual coin. Cardano is a decentralised public blockchain-based platform that is also one of the first open-source and peer-reviewed networks in existence.

Cardano aims to deliver advanced features based on a rigorous scientific and research-based process. Cardano’s founders - with Charles Hoskinson in charge - assigned academics and specialists from various educational institutions the task of reviewing Cardano’s protocol.

The main aim was to create a third-generation platform that can improve smart contract deployment and resolve the scaling issues of Bitcoin, a first-generation coin. No wonder why many experts believe that if Cardano fulfils its promises, it may replace Ethereum, a second-generation coin.

Cardano uses two-layers: one to settle transactions and one for smart contracts; the Cardano Settlement Layer (CSL) and the Control Layer, respectively.

The heart of Cardano is its proof-of-stake algorithm called Ouroboros. Unlike proof-of-work protocols, Cardano’s protocol is less energy-consuming and more affordable. Curiously enough, Ouroboros is an ancient image of a dragon eating its tail.

How Does Cardano Work?

It’s noteworthy that unlike proof-of-work protocols, proof-of-stake blockchains do not require a massive amount of electricity and are more environmentally-friendly.

Yet, the Ouroboros protocol is quite different from other proof-of-stake algorithms. The blockchain is split into epochs, which are made of fixed periods called slots.

There are slot leaders that are responsible for adding blocks. They must create 50% transaction blocks within a single epoch, with blocks being approved by input endorsers whose election is based on their stakes.

To ensure unbiased participation and fair validation processes, Cardano has employed a multi-party computational system, which acts as a digital coin toss.

With its scalable consensus mechanism, Cardano’s model also allows more transactions to be processed per second, which helps it remain competitive with traditional payment systems, such as Visa.

Cardano’s native coin is called ADA. ADA has a limited supply of 45 billion coins. Currently, there are 31,112,484,646 coins in circulation.

Interestingly, ADA gets its name from the 19th-century mathematician and writer Ada Lovelace (the daughter of Lord Bayron) who proposed the first mechanical computer.

Being a decentralised currency, ADA is an attractive asset across different industries as it provides increased transparency and procedural efficiency.

So far, the company behind Cardano, Input Output Hong Kong (IOHK) has been offering different services, including Atala SCAN that aims to protect users from counterfeit goods and unauthorised pharmaceutical products; Atala PRISM that provides a tamper-proof ecosystem for academic certifications and credential issuance; Atala Trace/EMURGO for product certification in the agricultural sector.

Of course, ADA can be used also as a payment method or a voting tool within the ecosystem.

But what are the other advantages of investing in Cardano in 2021?

Related: 3 Reasons Why Cardano Could Double Your Money this year

Would You Consider Investing In Cardano ADA?

The Pros of Investing In Cardano 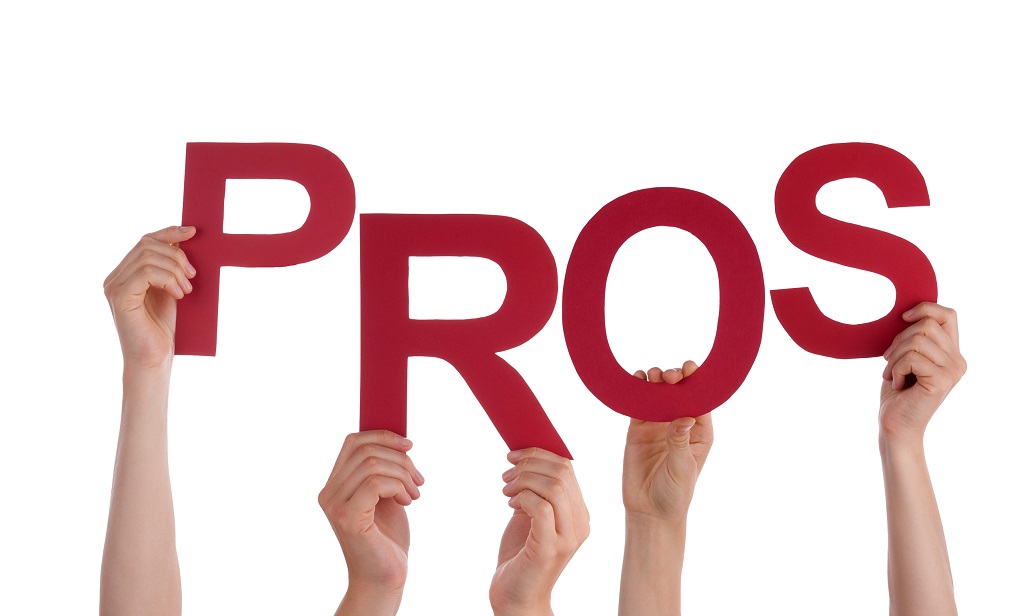 What are the benefits of investing in Cardano?

Founded by Charles Hoskinson and Jeremy Wood, co-founders of Ethereum, Cardano gained a lot of popularity after its official release in 2017. Cardano is also peer-reviewed to ensure there are no weaknesses in the protocol. Note that to prevent bugs and hacks, Cardano tested various protocols and developed an advanced blockchain.

This is one of the main advantages of Cardano. By implementing a settlement layer and a computational layer, Cardano ensures unlimited scalability and quick transactions. It also allows updates to be performed without interfering with payments and transactions.

Cardano’s potential as a fully open-source platform with a code written in the Haskell programming language is also worth considering. Here we should note that Haskell is a functional language that is all about functions and blocks that perform tasks when needed.

Cardano is proclaimed to be a third-generation blockchain. It is considered to be more reliable than other cryptocurrencies as ADA keeps overcoming challenges that other platforms have encountered. It is also more scalable than Ethereum and more decentralised than Bitcoin as it scales horizontally (through its protocol Ouroboros Hydra).

Cardano is a proof-of-stake protocol that ensures mathematically proven safety. Given the increased number of cyberattacks in the crypto sector, there’s no doubt that security is crucial. Note that Cardano’s system has unparalleled plans for managing security and privacy.

Just like other cryptocurrencies, Cardano relies on decentralisation. The good news is that Cardano can provide digital identity to unbanked citizens throughout the globe, especially in developing countries across the globe. In fact, Cardano has started to cooperate with over 54 countries. Note that according to data, the world’s population with no access to financial services is over 1.7 billion.

The Cons of Investing in Cardano 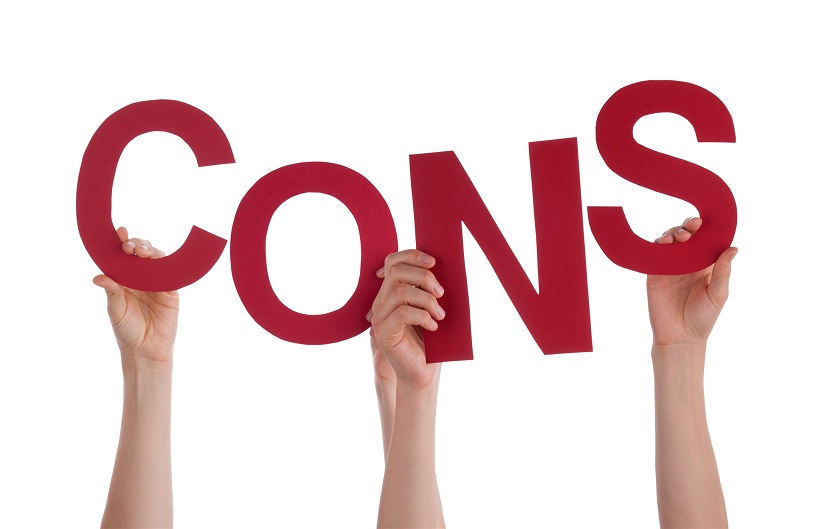 While Cardano has some impressive advantages over other coins, both traders and investors should be familiar with the cons of investing in ADA in order to make an informed decision.

Like any investment, putting your money into Cardano isn't risk-free. Here are some serious drawbacks of investing in Cardano:

Though Cardano is known as the academic blockchain that has undergone essential review and testing, the truth is that Cardano is still developing, and is developing slowly. While trying to keep up with competitors and tech advancements, Cardano will take its time to develop. Currently, Cardano is losing position among Ethereum and EOS as it’s still dealing with incomplete smart contract and token standards.

Though having an open voting system where upgrades can be proposed and vote for/against is an appealing factor, this is one possible drawback. Simply because token holders are not always tech-savvy and may vote for an unreasonable decision! Ethereum’s proof-of-stake researcher Vlad Zamfir claims that on-chain voting can be dangerous and may force changes on full nodes.

❌ Issues with its synchronisations between ledgers:

Though Cardano has implemented a unique algorithm, some critics claim that Cardano’s assumptions that ledgers will be synchronised at any given point of time are unrealistic for a global blockchain. On top of that, many say that double-spending or 51% attacks are still possible. Input endorsers, for instance, may end up approving the same transactions from two slot leaders.

Conclusion: So is Cardano a Good Investment?

It is ranking #7 as reported by CoinMarketCap.

Since the total number of tokens is limited, the risk of inflation is also limited as the demand for the coin continues to grow. There are also many technical advantages, such as Cardano’s decentralised nature and layered architecture that make Cardano a good investment.

That said, to answer if ADA is worth holding, we should consider a wide range of factors and potential risks. Cardano’s success also depends on the number of smart contracts and dApps it would be able to host. Though its peer-reviewed nature makes it secure, there is a lot to develop further.

We can only say that ADA has a good chance to get its fair share in the crypto investment sector.

It is moving upwards and has been steadily occupying CoinMarketCap’s Top 10 in terms of market cap and trading volume.

Its low entry-level makes it an attractive investment for traders and beginners, as well as long-term investors. ADA is also the right choice for people who simply want to diversify their portfolios.

Put simply, Cardano is low-risk investment with lots of potential rewards. It’s something you should definitely do some research before you consider adding ADA to your portfolio.

The real Cardano investing question then, does it really work? If you’re willing to invest the time and energy, then for you, it could well do.

How Much to Invest in Cardano? 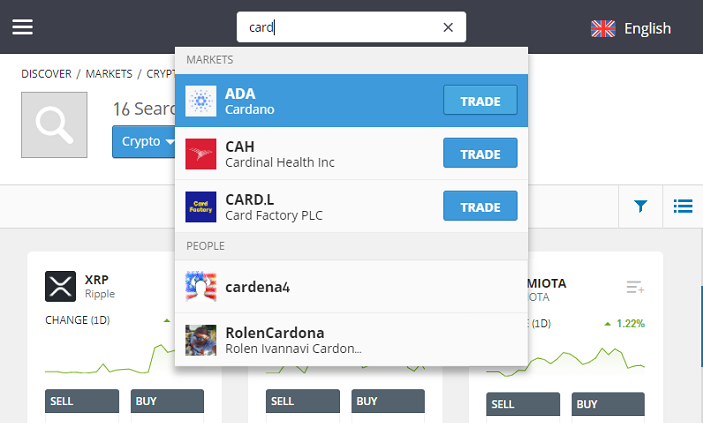 If you believe that Cardano’s advantages outweigh its disadvantages, making it a good investment in both the short- and long-term, then you may want to know how much to invest in ADA.

As stated earlier, ADA’s current prices make it an attractive asset for both beginners and experienced traders.

Yet, just because investing in Cardano is highly accessible that doesn’t mean you should risk all your savings. One should never invest more than they can afford to lose.

Remember that cryptocurrencies are highly volatile and investing in ADA can be risky.

But here’s a tidbit: buying ADA can be easy. With eToro you can buy and sell ADA and trade CFDs of up to 90+ crypto pairs.

Ready To Invest In Cardano ADA?

Will Cardano Be a Millionaire Maker?

Interestingly, though Bitcoin is the largest coin in terms of market cap, ADA has been outperforming Bitcoin in the past months. Cardano has grown by more than 500% increment!

Most forecasts agree that ADA will continue to increase amidst the bullish momentum in the crypto sector. Many believe that the coronavirus crisis will lead to increased use of cryptos and blockchain technology, which could lead to an increase in ADA’s value.

If Cardano manages to establish itself as a smart contract operator, it’s possible for ADA to reach $1.5-$2 in the next few years.

Expert Adam Web suggests that Cardano has the potential to jump over $10 per coin in the next five years.

Do you think that Cardano’s pros outweigh its cons?

If you liked our article Pros and Cons of Investing in Cardano, then please share it with anyone who might be interested in cryptocurrency and blockchain technologies.

Though Cardano has a more effective staking mechanism than Ethereum - with Charles Hoskinson claiming that Cardano has the best code in the cryptocurrency sector - Cardano is still developing, so it’s too early to tell. While Cardano has a promising future, figures show that Ethereum is still a leader in the smart contract and dApps deployment sector, currently ranking #2 in terms of market cap and trading volume.

Ethereum Price Prediction - Will ETH Value Rise?
Like most sectors of the economy, the cryptocurrency market had a bumpy ride throughout 2020 due to the coronavirus pandemic. Despite this, Ethereum...

What Will Ethereum (ETH) Be Worth in 2030?
Ethereum hit a new all-time high on Saturday, February 20 with a price of $2,036. This milestone was reached after the coin registered gain after...

Could Bitcoin Cash Be A Millionaire Maker?
Bitcoin Cash is a relatively new cryptocurrency, but it has proven itself to be an excellent investment for investors and traders in its short...

Bitcoin vs Binance Coin: Which Crypto Should You Buy in 2021
Anyone with even a passing familiarity with cryptocurrency will know that Bitcoin is by far the most famous coin of them all. It was the original...

Is Ripple (XRP) Expected to Reach $100 or More in the Next 5 Years?
The fame of the crypto world has doubled over the years, and now all investors look to the crypto realm as a potential place for future storage of...
Top Broker