51% Attack Explained: How To Plummet The Price Of A Cryptocurrency

A 51% attack is essentially a ‘hack’ of a blockchain that allows hackers to do a variety of malicious activities which in the short term may be financially beneficial but will ultimately destroy a cryptocurrency and plummet the price.

But is there any incentive to perform a 51% attack?

In this article, we’ll explain exactly what a 51% attack is, what attackers are capable of accomplishing and if it is truly worth it for hackers to attempt such a fleet.

Surprisingly, the people most likely to perform a 51% attack are not who you think. 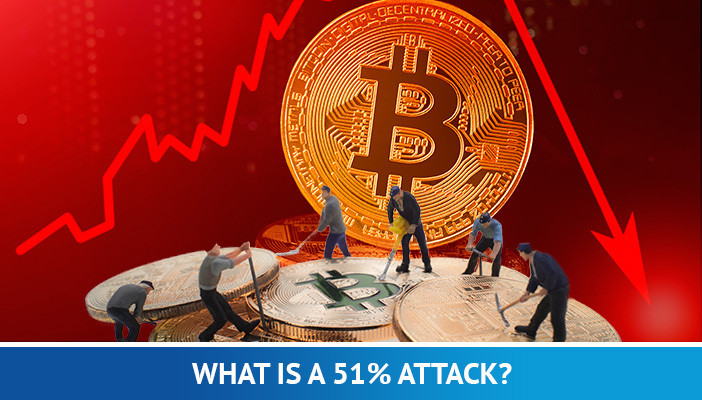 It’s all to do with hashing power.

Hashing power is essentially how much power you have to mine blocks. If you can mine blocks very quickly, you likely have a lot of hashing power.

If you have 51% of the hashing power, it means you can mine faster than the rest of the miners.

In a hypothetical race between one entity that had 51% of the power and another that had 49%, the 51% group would ultimately win.

But having 51% of the hashing power doesn’t necessarily mean you will do anything malicious yet.

For it to be properly labelled as an ‘attack’, the entity that controls this power would need to start mining blocks privately.

At this point, the network is presented with two different chains. It will always pick the longest one as the true chain as it will have the most mining difficulty because more blocks have been mined.

There is a principle in cryptocurrency that says: ‘The longest chain is the true chain’.

Cryptocurrencies that do not use proof of work cannot be 51% attacked, such as Ripple. This is part of the reason why Ethereum is changing to proof of stake.

What could people do with 51% attack?

One of the most well-known things miners could do with 51% of the hashing power is to perform double-spends.

Double-spends are where someone can spending their funds more than once.

Theoretically, a miner could make a series of transactions on the original blockchain and not announce them.

Then when they finish their private blockchain and announce it, theirs, which is longer, will be accepted as the true chain and those previous transactions will not be counted.

And they will receive those coins back as the transaction didn’t happen on that blockchain.

They could also put other miners out of business as the attacker would be able to mine blocks much faster. Other miners will not be able to compete.

Eventually, the 51% attack would grow as miners leave the network. As the miners leave, the attacker’s hold over the blockchain would increase.

The more popular a cryptocurrency is, the harder it is to perform a 51% attack.

This because more miners working on it keeping it secure, this means that you need more hash power.

Less popular cryptocurrencies are more at risk as there is less hashing power overall.

The only real reason to conduct a 51% attack would be to destroy a cryptocurrency.

Let us explain why.

If you somehow managed to monopolise a cryptocurrency’s hashing rate, you would potentially be able to earn a lot by mining. It is more incentivised, and you could earn for longer.

Sure, an attacker might be able to get away with a few double-spends, but it wouldn’t go undetected.

Eventually, people who watch the blockchain’s ledger would start to notice as chains of blocks are ‘orphaned’.

Orphaned blocks or ‘detached blocks’ are blocks that are not part of the blockchain. This happens when miners create blocks at the same time.

In most circumstances, this is not a problem. While transactions in the orphaned block are invalid, they will simply be moved over to the next block.

However, when this happens and many blocks become orphaned, this is a problem.

Trust would be eroded if a separate blockchain was created, especially if you were to carry out malicious activities.

Conducting such activities would stop people using the cryptocurrency as no one would be able to trust that their transactions would be valid.

Eventually, the cryptocurrency would likely plummet in price, and the attacker would be left with a worthless asset that no one would want to use anymore.

This would largely rule out such an attack ever coming from a mining pool, however, a large government that wants to destroy a cryptocurrency may be able to pull it off. 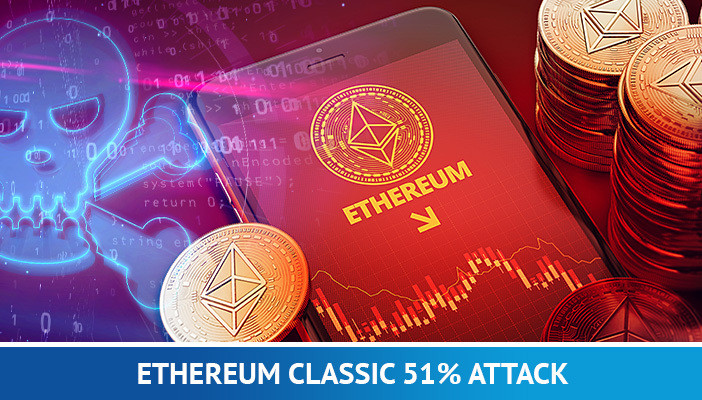 At the beginning of 2019, Ethereum Classic (ETC) was supposedly the victim of a 51% attack.

It was first reported by cryptocurrency exchange Coinbase who said they detected a ‘blockchain reorganisation’, by which they likely mean a change in what is regarded as the ‘real’ blockchain.

At first, it wasn’t too suspicious, but eventually, double spends were noticed totalling approximately 88,500 ETC, which today is roughly $400,000.

The attack led to ETC being delisted by Coinbase.

Some people argue that it wasn’t a 51% attack, including Ethereum Classic themselves who attributed it to an ASIC manufacturer testing new technology on the blockchain.

Whatever the cause was, Ethereum Classic’s price plummeted shortly after news broke out.

Coinbase may relist ETC in the future, but they are largely doing it now because they are concerned that they or their clients could be victims to double-spends.

A 51% attack is still possible on Ethereum (ETH) but is less likely as Ethereum has 17 times more hashing power.

Could Bitcoin suffer a 51% attack? 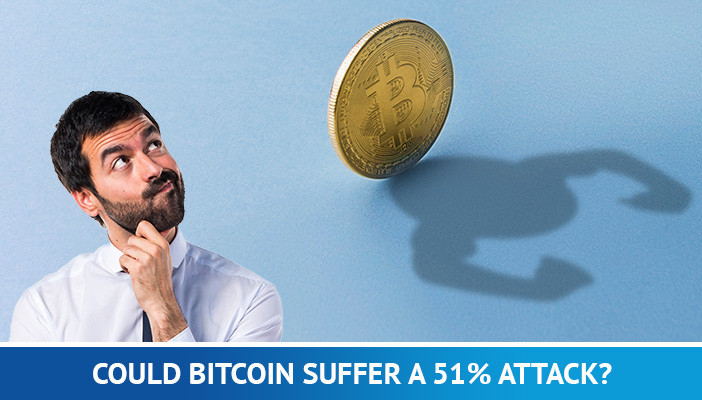 Yes, it is still possible.

If an entity was able to gain control of 51% of the Bitcoin network, they could control it.

With Bitcoin, this has almost happened a couple of times where miners have almost controlled 51% of the hashing rate.

So far, though, no such attack has ever happened.

Even if the mining pools did manage to control up to 51% of the Bitcoin network, it doesn’t mean that they would do anything bad.

Most likely they would want to keep things moving as they were. Any malicious activity would put people off using Bitcoin.

That said, there is no legal framework in place to prevent people from carrying out such attacks and no means of punishing them.

The closer mining pools get to dominating Bitcoin, the more likely people will jump to different cryptocurrencies.

However, there is no reason why this wouldn’t happen with any other cryptocurrency.

Computers are becoming more powerful and soon it looks like we may be entering an age where quantum computers exist.

Quantum computers are computers that can solve an equation that would take a normal computer 10,000 years in just a few seconds.

Currently, we are still in the hypothetical stage and such computers are yet to exist. That said, Google is supposedly in the process of creating one.

Such powerful computers could put cryptographic technology at risk as they rely on complex mathematical equations to ensure security.

A quantum computer could theoretically decrypt even the most secure blockchain network, making it more likely a 51% attack (or likely even more powerful) could occur.

It is even believed that they could decrypt users’ private keys and forge transactions, eliminating trust in the blockchain.

That said, such an attack might be unlikely by Google who does not seem to have any motivation to carry it out.

Some cryptocurrencies claim to be quantum computer-proof. The most well-known is IOTA.

As it is still very early, it is hard to know exactly what quantum computers will be capable of.

Though it should be remembered that only 10 years ago, people believed it would take 50 years for them to exist.

Why is this important for cryptocurrency trading?

51% attacks are vital to understand because traders should know the risks of getting involved in cryptocurrency trading.

Ideally, you want to stay away from cryptocurrencies that have the potential to be controlled by one entity and become centralised.

You can’t necessarily trust what they will do with so much power. For that reason, many cryptocurrency enthusiasts and traders stick with decentralised cryptocurrencies.

Some cryptocurrencies may be more vulnerable to attacks than others. IOTA, for example, supposedly only needs an entity to control 34% of the network to perform such an attack.