Before we get down to business, let’s briefly talk about smart contracts, their characteristics and applications in today’s world of digital finance.

A smart contract is a computer protocol, intended to help you exchange money, shares, property or anything of value in a conflict-free digital environment. With smart contracts, the services of a middleman are obsolete, saving you time and conflict.

One of the best things about blockchain technology is that since it’s a decentralised system, existing between all permitted parties, there’s no need to pay fees to intermediaries, thus saving you time, conflict and money. Blockchain is faster, cheaper and more secure compared to traditional banking systems.

It was in the early ‘90s when a legal scholar and cryptographer, Nick Szabo, came to the conclusion that a decentralised ledger could be used for smart contracts or so-called self-executing contracts or blockchain contracts.

In his famous example, he referred to smart contracts as “vending machines”. He explained how users could input data or value and receive a finite item from a machine.

In such a format, contracts are computer codes, stored and replicated on the system. The network of computers that run the blockchain is also supervising the process. This results in ledger feedback such as transferring money and receiving the product(s) or service(s).

Smart contracts are useful for basically any type of arrangement between two people, including financial services, legal processes, crowdfunding activities, credit, property law and more. While a standard contract outlines the specific terms of a relationship, a smart contract enforces the relationship with a cryptographic code. Smart contracts are basically programs that execute what was asked by their creators.

For example, if you rent an apartment and wish to pay for it with cryptocurrencies, you can totally do that through a smart contract. Both the landlord and the tenant will be notified when a rental date arrives, specified by the parties.

Where do smart contracts work best? 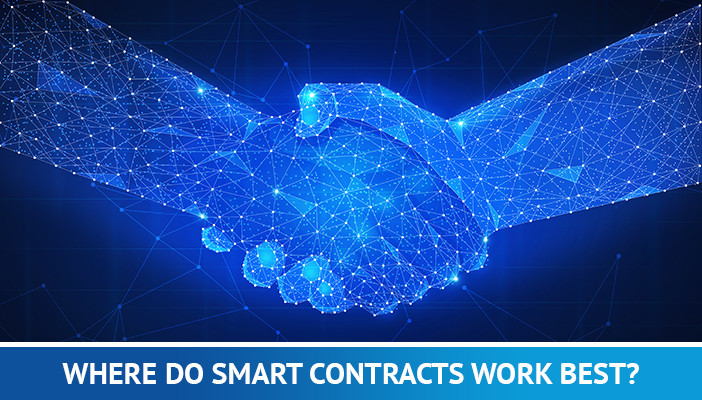 Smart contracts can be encoded on any blockchain. However, Ethereum is the most popular as it provides unlimited processing capabilities. Ethereum is built specifically for creating smart contracts.

Ethereum is a decentralised computing platform. It is not to be confused with Ether, which is the cryptocurrency token the platform generates. Programmers can write smart contracts on the Ethereum blockchain and the contracts will be automatically executed, according to their code and the way they were programmed.

How does it work? 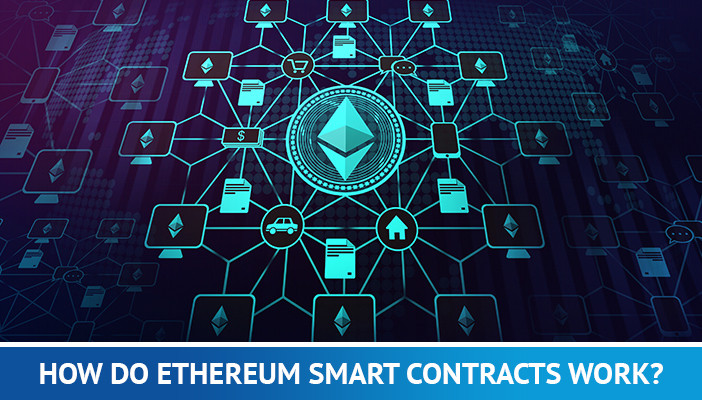 It’s worth mentioning that though Bitcoin was the first to support basic smart contracts (in the sense that one person can transfer value to another in the network), Bitcoin is limited to the currency use case.

In comparison, Ethereum has replaced Bitcoin’s restrictive language with a language that allows developers to write their own programmes.

The term “smart contract” is often used as a substitute for Ethereum scripts because it’s mostly associated with this platform.

Basically, on the Ethereum platform, developers can programme their own smart contracts or so-called “autonomous agents”. The language supports a broader set of computational instructions, making it easier for programmers.

The whole structure of Ethereum smart contracts, combining programming language, platform development and verification by a great number of connected computers ensures that smart contracts are safe, trustworthy, open and with little to no probability of any possible mistakes.

Most people are aware of the Ethereum project because of the token, Ether.

However, many are not aware that this is one of the most successful startups in the last two decades. It also became the world’s leading smart contract platforms, chosen by most developers.

Since the platform went live in July 2015, it has grown by leaps and bounds and right now, it can facilitate smart contracts for everything from online games to ICOs. The majority of ICOs are now using the ERC-20 token standard to facilitate their offering.

Apart from having the biggest market capitalisation among all the other smart contract platforms out there, the beauty of the platform is the degree of standardisation and support it offers. There’s also a set of clear rules for developers to follow, making Ethereum smart contract development quite easy and less risky.

In terms of support, Ethereum is constantly updating and improving the way that their smart contracts are created and operated.

Further to that, Ethereum has developed their own smart contract programming language, known as Solidity. It makes it ten times easier to set up a smart contract and helps with standardisation. Solidity is a contract-oriented high-level language, quite similar to JavaScript. It is designed for the Ethereum Virtual Machine (EVM). There’s another high-level language used to write Ehtereum contracts, named Serpent. It is quite similar to Python but Solidity remains the preferred language of development for Ethereum developers.

Let’s outline some of the best Ethereum smart contract platform features that make it so popular among programmers: 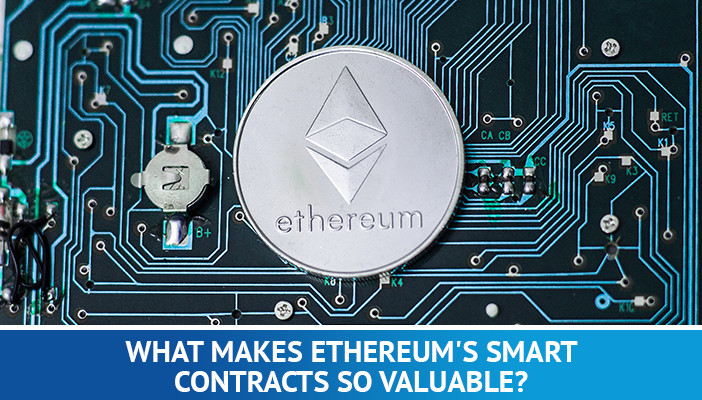 Ultimately, the power of the Ethereum blockchain is its programmability.

The reason why Ethereum is the best option for executing smart contracts is because agreements are embedded in the code itself so that transactions automatically execute.

Ethereum’s digital agreements or “smart contracts” as everyone calls them, have limitless formats and conditions. In addition, smart contracts can even call on other contracts, making Ethereum useful for payment settlement as well as for arbitration of transactional events in real estate, law, government registries, energy grids, trade finance and many other sectors.

A special feature of how smart contracts work on Ethereum platform is that each one has their own address on the blockchain. This means that the corresponding code is not listed into each contract; instead, a note launches a transaction which creates and attaches a unique address to each contract. After the primary transaction, the smart contract turns into an inseparable unit of the blockchain and its address never changes. After that, the smart contract will “act” non-stop till it reaches the gas limit or till the successful end of the operation.

So far so good. Keep in mind, though, that smart contracts are still new technology. Whether we talk about the Ethereum platform that basically dominates the smart contract blockchain industry, or another smart contract platform, there are problems that can arise.
One of the drawbacks of smart contracts is that they have to contain zero bugs in order to properly conduct the activities they are programmed to do. These bugs can be exploited by scammers and money can be stolen.

Governments are also trying to intervene, questioning what will happen if something unexpected happens or the contract can’t get access to the subject of the agreement.
With traditional contracts, the court will be involved. However, with smart contracts, “Code is Law”, meaning that the contract will perform no matter what.
The issues that accompany smart contracts will, most probably, be resolved in time, as this is relatively new technology. There’s room for perfection but financial experts agree that they will become an integral part of our society and Ethereum will continue to lead the bunch.

Some other drawbacks to the Ethereum platform include: 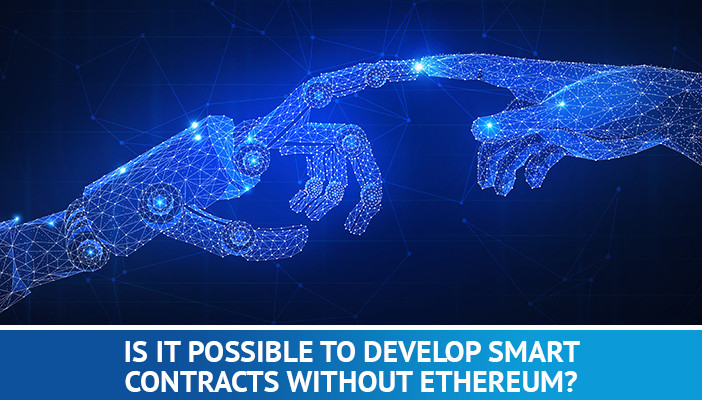 Is it possible to develop smart contracts without Ethereum?

In comparison to smart contracts performed on Ethereum network, cryptocurrency platforms like Obyte offer a different type of smart contract which is already attracting the attention of users. Obyte is a platform, built on a DAG (directed acyclic graph) protocol which challenges Ethereum with its human-readable smart contracts, which are also called smart-addresses. They are called this because they are shared addresses with a set of conditions that must be met in order to transfer funds out of them.

Alternative platforms and new ways to programme a smart contract will be available in the future, that’s for sure. In order to become more accessible to everyday people, smart contracts will develop further, without doubt, say experts.

We’ve talked about the nature of smart contracts and the Ethereum platform which is where the magic happens. Though complicated and requiring a certain level of knowledge, Ethereum contracts are actually considered the future of cryptocurrency, performing all the functions of the blockchain with ease.

Ethereum gives more opportunities for coding various smart contracts, as compared to other platforms. You can pretty much implement any scenario. If you want to build a decentralised exchange, Ethereum is the platform to turn to.

Do Ethereum smart contracts have any future?

It’s safe to say that blockchain, Ethereum and smart contracts will further develop and transform the financial industry as we know it. Only time will tell what to expect and how to adapt as consumers.