What is Litecoin? A Beginner's Guide to Litecoin and Tips for Investing in LTC

Known as the silver to Bitcoin's gold, the party may just be beginning for Litecoin. A return of 100% within the last year has investors keeping a close eye on the digital coin.

The crypto market topped $2 trillion last year. Although much of the attention is being drawn to Bitcoin, it's important to assess its silver counterpart, who has an almost perfect correlation coefficient to BTC, Litecoin. Many are predicting a positive rise in Litecoin's market prices, keeping an eye out and staying ready for any potential surges this year.

Often referred to as Bitcoin's silver counterpart, Litecoin is one of the top 30 cryptocurrencies on Coinmarketcap's list. Litecoin works as an online payments system, similar to PayPal. However, instead of using U.S. dollars, you trade Litecoin units. This is as close to a traditional currency as it gets, there's a lot more Litecoin has to offer as a digital currency. Although very similar, what Litecoin has managed to achieve that Bitcoin hasn't is its incredible transaction speed. Litecoin processes and generates blocks four times faster than Bitcoin. While it takes Bitcoin ten minutes to process one block, it takes Litecoin 2.5 minutes to process double the amount.

It is well known that Bitcoin set the foundation for blockchain technology. However, there are many unfilled gaps with Bitcoin that Litecoin managed to pack relatively fast. As a cryptocurrency that allows fast international transactions at a cheap cost, can be efficiently mined with consumer-grade hardware, there's no doubt on its future fame.

Litecoin all began in October 2011 when former MIT graduate and Google employee Charlie Lee designed the digital coin based on Bitcoin's foundation and protocol. Since its beginning, Litecoin has been part of the top ten capitalizations in the cryptocurrency market. Seeing as it's one of the first altcoins following the rise of Bitcoin, many others have diminished from 2011 to 2014. Litecoin's minor advantages to Bitcoin secured its spot on the market up to this day.

Lee adjusted the coin to tackle some of the barriers posed by Bitcoin, such as confirmation time. Litecoin processing time is four times faster than Bitcoin, namely its most attractive characteristic. The 2.5 minutes compared to Bitcoin's ten minutes allows Litecoin to process transactions at a much faster rate. There is also a larger cap on the maximum amount of Litecoin produced. Bitcoin has a cap at 21 million, whereas Litecoin's cap is almost quadrupled at 84 million.

November of 2013 saw a massive surge within 24 hours, seeing a 100% jump in aggregate value for Litecoin, sparking huge focus on the up and coming new cryptocurrency. In May of 2017, the world saw Litecoin become one of the top five cryptocurrencies by the market cap when it got listed by Coinbase.

Moreover, Litecoin prices have improved marginally as it continues to grow with a hugely dedicated community willing to protect Litcoin's integrity going forward.

Like any other cryptocurrency or a new form of technology, there are always downsides. Before investing, it's good to stay entirely informed of what you're getting into.

There are competing altcoins that provide similar, if not the same, advantages and benefits as Litecoin. Litecoin was on the scene early on and became one of the first altcoins to build on the network of Bitcoin and create its strong reputation. Although it still holds the reputation in speed and reliability, many other more inexpensive cryptocurrencies provide comparable processing times and transaction security running on their own blockchain.

There's also a perception of shaky leadership trust. Charlie Lee, who was a Google software developer before creating Litecoin, sold in 2017 all of his stake in LTC, citing a suspected "conflict of interest." This made many question the confidence of management in the coin and its future. However, after a short break, Lee is now back and working on the project.

However, LTC outperformed many other altcoins, finishing 2021 as one of the top twenty-five cryptocurrencies. Its growth has diminished any questions regarding its leadership style.

Why Invest In Litecoin?

The crypto market going back to $2 trillion, and it may just be the right time to invest in Litecoin. The digital asset's price has jumped over 50% since November 2020, and with all the attention often placed on Bitcoin, it's worth mentioning that LTC correlates perfectly with its famous counterpart.

According to Coin Predictor, the correlation coefficient between Bitcoin and Litecoin is 0.83. Therefore, it costs you a fraction of what you'd pay for Bitcoin to get a hold on Litecoin. 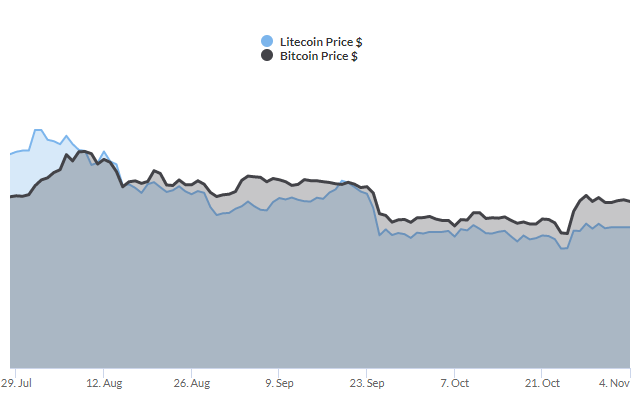 Additionally, Litecoin, compared to other rivals, provides a higher block reward and is extremely fast. With a faster transaction speed, the coin's average time to mine a block is just two minutes

There is also less vulnerability to hacking attempts on Litecoin. Because of its fast transaction speed, there's only such a small window where hackers can attempt to pull anything off, in comparison to Bitcoin's ten-minute timeframe. In addition to this, it's an open-source platform. Litecoin is built upon the BTC Core Client's naturally open-sourced fork.

This makes adapting the system and adding new features simpler for developers to keep up with the evolving demands of the market. Its versatility also enables developers to periodically deploy cybersecurity updates to keep up with evolving attack methods of hackers. As the usage of Litecoin is increasing, it's safe to assume that its value will also continue to grow in the near future.

How To Invest In Litecoin?

By following the five steps outlined below, you can invest in Litecoin in less than 5 minutes!

Step 2: Deposit some funds with a debit/credit card, e-wallet, or bank transfer

Step 3: Choose how much Litecoin you want to invest

Step 5: Leave your Litecoin stored until you decide to cash out

As you can see, investing in Litecoin online could not be easier!

When cryptocurrencies were introduced, you needed to be somewhat of a tech-savvy in order to invest. Initially, you needed to have some sort of basic knowledge in programming in order to get yourself a crypto wallet. Today it's as easy as downloading a mobile app to buy and sell crypto.

As other crypto properties, investing in Litecoin can be achieved either by mining or purchasing LTC online with a few easy clicks on a trading or exchange site for cryptocurrencies. Once you have Litecoin, you can choose from different ways of investing in blockchain.

In cryptocurrency, you can purchase the coins on an exchange and keep them in a digital wallet for safe storage until you want to use them again in the future if prices rise. A great platform to buy Litecoin is eToro.

However, this can leave future earnings on the table if you don't take advantage of your windows of opportunities. In 2019, for instance, Litecoin climbed from under $20 to $160, then fell back down to less than $40 in 2020. Prices may fluctuate, so therefore you'll have to identify when to take risks.

Tips Before Investing In Litecoin:

1. Keep your LTC safe and secure

First thing's first, you'll need a digital wallet to keep your LTC secure. Purchased Litecoin is deposited in digital wallets. In the past wallets have been prone to hacks. That's why it is necessary to pick a safe wallet when storing your coins such as eToroX. Also, hardware wallets are known to be more secure.

A hardware wallet is a handheld computer that safely stores your LTC. The wallet consists of a private key required to send your assets from one location to another. It's also wise to avoid trading on public WiFi networks, and ensure you have a reliable connection to avoid any attacks from hackers.

It's generally prudent to keep your initial investment in Litecoin reasonably small, considering its short history and still extremely volatile conduct. Also, seasoned investors have committed only a single-digit proportion of their capital to Litecoin while holding the balance in less risky securities.

Preserve your investment discipline, amid the speculation and predictions, buying just what you can expect to theoretically fail and not get caught away by the promises of giant price swings.

When deciding to invest in Litecoin, it might be necessary to have a plan. "Bitcoin's heightened day-to-day volatility makes this especially true," says Wall Street analyst Ari Wald. Bitcoin plunged by 50 percent in March due to COVID-19 pandemic and other cryptocurrencies also experienced great losses.

The fact that many cryptos today, such as Bitcoin and Litecoin, have regained their losses post-Covid collapse, indicates the virtue of persistence.

3. Keep on eye out on trends and signs

With its almost perfectly positive correlation coefficient to Bitcoin at 0.83, one of the biggest indicators would be keeping an eye on Bitcoin's performance, to which you can buy Litecoin for a fraction of the price. There are also other external indicators that may give you the sign to go for it.

With millions being invested in a fiscal stimulus in the U.S., investors fearing inflation are looking toward crypto as a safe reserve asset, therefore increasing demand for coins such as Litecoin. Assuming this trend continues, it will greatly attract investors and individuals alike to invest in LTC.

Although Litecoin and many other cryptocurrencies are considered commodities by the Federal Judge in the U.S., they're not necessarily treated that way with the IRS. It's subject to the same tax status as other investment properties. Litecoin taxes can be brought upon through being sold, transferred, or merely expended (if the value has risen after you initially purchased it).

It's also important to note that this tax is dependent on how long you hold on to the coins. With that said, it's important to log all your transactions. On the bright side, crypto earnings are taxed on capital gains, which is mostly smaller than regular income taxes.

Start Investing In Litecoin With eToro

If you're set on investing in Litecoin by now, eToro is a user-friendly and inexpensive platform providing great crypto trading experiences. The company continues to expand by introducing new products and other cryptocurrencies on top of Litecoin, allowing beginners and experts to explore various possibilities in the crypto world.

If you're thinking about investing in Litecoin, remember, there is an incredibly high degree of risk involved.

Are you planning on buying or selling Litecoin?

Pros and Cons of Investing in Litecoin, Will It Be a Millionaire Maker?