An analytical guide to investing in Ripple in 2021

What will happen to the Ripple XRP price in 2021?

Since cryptocurrencies are decentralised, crypto investors have always wondered: What drives the Ripple XRP price?

Ripple XRP is currently one of the most popular cryptocurrencies – and one that is fascinating at that. It is distinct from the big cat cryptocurrencies like Bitcoin and Ethereum because it was not built on the idea of decentralization. Preferably, XRP is strongly knitted with a handful of businesses, investment firms, and banks around the world.

Although Ripple may appear disadvantageous when a lot of traders hold the notion that the redeeming quality of a cryptocurrency is the amount of freedom it can wield from external firms. But then, cryptocurrency enthusiasts are increasingly asserting that it could be the secret behind the immense success of Ripple XRP.

Even though it is somewhat difficult to predict how a cryptocurrency will surge or drop in the future, some crypto experts think that the distinctive market placement of Ripple XRP implies that it may survive some of the market’s ups and downs that have the potential to rattle the foundation of the cryptocurrency industry in the future.

If you want to buy or invest in Ripple XRP quickly and easily, with 0% commission, check out eToro Exchange!

But what really drives the Ripple price?

There are four main factors that most affect the Ripple price:

What Is Ripple XRP?

Before understanding how the price of Ripple XRP can be driven, it is essential to know what the cryptocurrency itself is and its uniqueness in the world of cryptocurrencies.

Ripple XRP came into the scene sometime in 2012, and similar to Ethereum, it is frequently used to explain its native currency and paying platform. The platform that hosts Ripple XRP as a cryptocurrency is known as RippleNet. Ripple XRP is presently the fourth largest cryptocurrency in the world, and it has a market cap of about $11,602,352,381 with a value of about $0.256052.

Bitcoin’s price dropped from $9,000 to about $4,000 in less than seven days, while the value of XRP dropped from $0.336300 on 14th February (the highest it has so far obtained for 2020) to $0.138500 on 12th March. But while many cryptos have returned with retribution for the past seven months, with values recuperating to (and in some instances going beyond) pre-COVID19 levels, Ripple has stayed comparatively bearish since then.

Ripple XRP’s huge gains—it surged an amazing 36,000%—came mainly in the fall of 2017. The chart below is a demonstration of the price of Ripple XRP in relation to other cryptocurrencies in 2017: 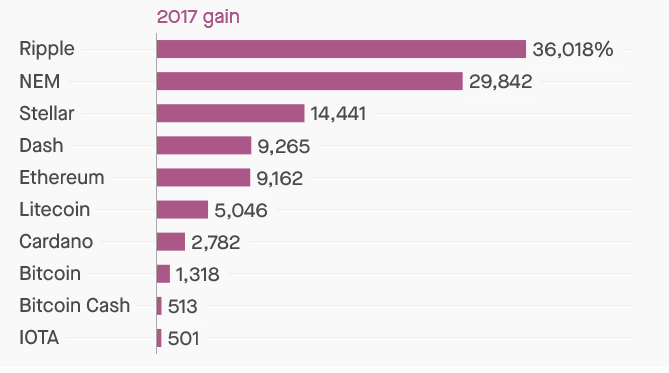 The 2017 largest crypto gainer versus other altcoins. Source: Coinmarketcap

Several altcoins (cryptocurrencies other than Bitcoin) that have found their way into the market were built to address some core issues. These issues were thought by their makers to ultimately obstruct Bitcoin’s success, regarded as the chief of all cryptocurrencies. Cryptos such as Bitcoin Cash was built to rival Bitcoin in terms of their relative scalability. Ripple, on the other hand, focused on another distinguishing element of cryptocurrencies: its decentralization.

According to Crypto Compare Top Tier, Ripple  XRP enlarged its daily trading volumes in the first quarter of 2020 by a whopping 72.23% over the fourth quarter of the previous year, reporting estimates of $322.66 million for the first quarter versus $187.34 million for the fourth quarter. The chart below better illustrates this: 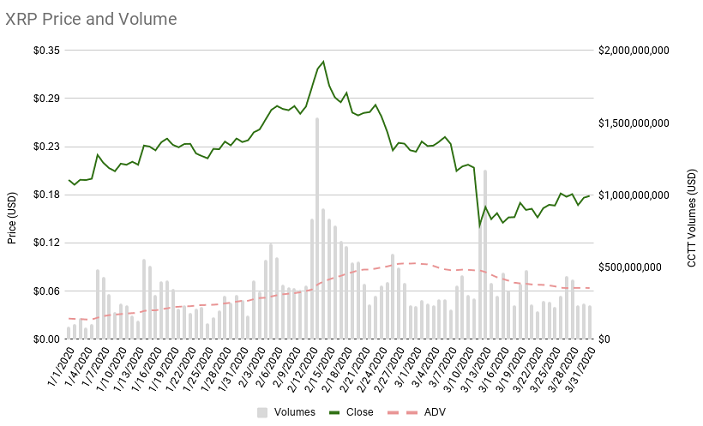 Rather than offering investors and traders a method of executing online dealing without the assistance of a centralized financial institution (most of which is expensive, potentially insecure, and slow), it was built to make it less stressful for these financial institutions to carry out their payment processes. Trans-national payments may even be more costly, slower than within-the-country payments – and worldwide ventures can execute tons of these financial dealings daily.

Some of the businesses and banks that presently use Ripple XRP include:

The 2021 price prediction for Ripple XRP

What is the take of cryptocurrency predictors on the price of Ripple XRP for 2021?

Some Ripple XRP enthusiasts do not think that the bearish movement is something to be anxious about. A well-known crypto analyst believes that the trend of Ripple XRP is presently moving in a waveform, implying that immediately after the price touches the $0.21 mark, it will begin to climb again. The graph below better illustrates this thought:

There are additional proofs that the price of Ripple XRP may increase in 2021. In the fall of August 2021, Flare Network, a partner of Ripple, disclosed that it intended to create a bilateral and unreliable link with Ethereum. The resultant effect of this is that Ethereum-based apps can have access to the XRP ledger, and the other way round, too. By incorporating the smart contracts of Ethereum with Ripple XRP, Flare Network can augment the cryptocurrency’s functionality – which has the potential to boost the demand for Ripple XRP.

Robert Art, another analyst, has also been more confident about the short-term position of Ripple. Some investors think that Art’s forecast is somewhat more bullish than acceptable considering the late evidence. But then, some other investors believe that maintaining a long-term hold on Ripple is indeed the most reasonable thing to do – after all, if Bitcoin’s initial investors had shoved the advice of pessimists to the bin persisted, they would have witnessed a great return. Is Ripple XRP towing the same path?

Predictably, Brad Garlinghouse, the CEO of Ripple, indeed believes that. As far back as 2018, he advised investors in the Ripple cryptocurrency to consider the years ahead, and not days or weeks earlier, when it relates to expecting the yields of their investments.

A one-day Ripple price prediction from Cryptopolitan shows that the cryptocurrency will witness a sell indication and have its price fall towards the $0.244 mark. The altcoin surged past the $0.255 mark on 9th November. 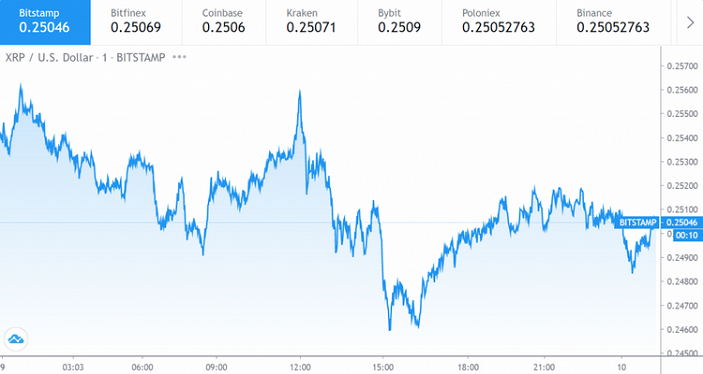 A prediction chart is indicating a one-day analysis of the price of Ripple. Source: Cryptopolitan

If the above expectations are right, Ripple investors could see a strong return in the coming years. But if the economy is badly affected, then Ripple price might be effected!

What Drives the Price Of Ripple XRP?

It is essential to recognize that, in addition to evaluating Ripple's past prices, the main factors that might influence its value in the time ahead. It will make things simpler for you to execute your own forecasts of the market contingent on recent developments in cryptocurrencies and finally find an educated response to the query,' should I engage in Ripple XRP?

So, let's see what really affects the price of Ripple? Or what drives ripple XRP prices?

4 Factors will drive the Ripple price in 2021

The advent of new cryptocurrency legislation is expected to impact the value of nearly any coin in the sector. But several analysts assume, as we discussed earlier in this post, that Ripple is best positioned to survive the challenge of tight government interference. As a consequence, while new legislations are capable of creating investor anxiety and may decrease the price of traditional cryptos, the price of Ripple could increase.

The stronger the demand for cryptos and the smaller the availability, the greater the price will spike in accordance with the fundamental law of economics. The price of Ripple, unlike cryptocurrencies like Bitcoin, is tightly regulated by Ripple Lab, its parent firm. To maintain the value of the cryptocurrency, the business actually owns more than fifty percent of all the available Ripple assets.

If Ripple's parent company wanted immediately to auction these off, it would stock the crypto market with new coins, which will have a major influence on the value of Ripple XRP.

The existence of whale bots will dramatically control the value of cryptocurrency tokens on the crypto exchange. To put it clearly, Whale bots are massive operators of software that instantly creates transactions, sometimes concurrently on an enormous number of assets and platforms together. This leads to artificially generating volatility, which subsequently pushes the value of crypto market up or down.

Factor 4: Digitalization In The Finance Industry

One of the vital contemporary catchwords in the finance industry is digital transformation. In reality, a third of all United Kingdom's financial institutions have listed digitalization as their company's key goal for the near future, as per the latest stats.

With established structures and elevated exchange rates making it tougher for businesses to execute online transactions, technologies like Ripple are more probable to be looked at. The fact that Ripple XRP will eventually be able to sell smart contracts renders even more probable, and as more institutions continue to embrace it, the market for Ripple XRP will surge, pushing up the value effectively.

Learn How To Invest In Ripple XRP

Trading Education has compiled top-notch trading courses that will help you stay abreast with price fluctuations of Ripple XRP so you’ll know when to enter the market and invest in Ripple XRP.  Check out our trading courses today to begin your journey to profitable cryptocurrency trading!

At Trading Education, we are very meticulous about our reader’s success, and hence we share some of the most sensible approaches to investing. 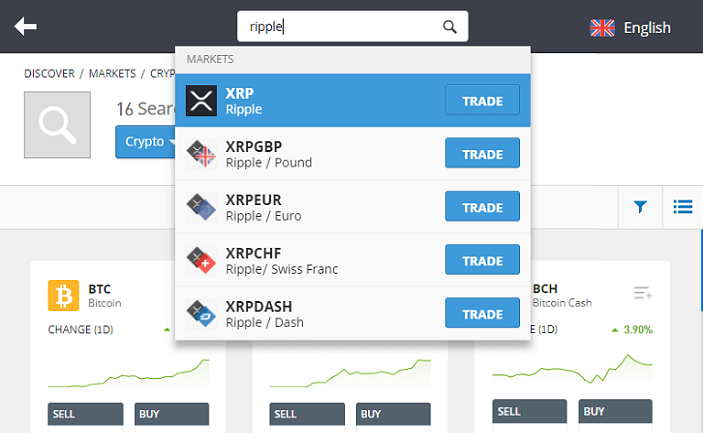 Suppose you are eager to begin your journey to trading Ripple, or this analysis has given some additional insight into your current trading information. In that case, you might be delighted to know that eToro offers you the opportunity to trade with Crypto assets, including Ripple, and CFDs on up to 90+ cryptocurrencies.

Concerning these factors that drive the price of Ripple XRP and forecasts, plus the recommendation of Brad Garlinghouse, CEO of Ripple Lab himself, it appears that if you are able to take the long view, then it will be sensible for you to make some investment in Ripple XRP. It is possible that we may not see a drastic price spike, but the stats show that for many who are willing to take long-term options, it may be a wise move.

Read More: Is Ripple a Good Investment and Should I Invest in it?