What Will Drive The Stellar Price in 2021?

An analytical guide to Stellar in 2021

What will happen to the Stellar (XLM) price in 2021? Crypto investors have always wondered: What drives the XLM price?

Stellar took off in 2014 as the brainchild of Jed McCaleb. McCaleb is also one of the founding fathers of Ripple, and there is an ongoing debate about whether Stellar is a fork of Ripple. However, the founder, himself, has negated this debate by stating that the coins are very different. The major difference between these two cryptocurrencies is that while Ripple is mainly focused on financial institutions, Stellar focuses more on everyday people and aims for financial inclusion.

Stellar has set forth to fill in the cracks between the cryptocurrency and the financial universes. From that point forward, Stellar started a series of collaborations with a few big names in the FinTech world. The organisations incorporate IBM, Stripe, and Deloitte, and some other major institutions across continents.

Stellar quickly became one of the major players in the cryptocurrency market. Naturally, investors, both existing and new, are keen on finding out the answer to what drives the prices of Stellar? As it is this answer that holds the secrets to good investment practices of Stellar.

The factors that drive Stellar’s prices are:

But first, what has sparked the interest in Stellar. Why Stellar?

Stellar can be considered Bitcoin's quicker, more versatile cousin that doesn't need mining. The tokens can be exchanged anyplace on the planet in only three to five seconds. This makes the altcoin ideal for overseas transactions. Around the world, modest and quick transactions through mobile phones can be especially valuable on the off chance that someone is in a secluded area without any access to banks. And even if banks are accessible, overseas transactions can cost an arm and a leg, but with Stellar it will cost just in pennies, one penny to be exact. The cost of an overseas transaction is about 0.00001 Lumen which is priced at just one cent. This has also led to speculation that in the coming days Stellar can very well drive Western Union and the likes out of business.

Stellar has an integrated exchange where major altcoins like Ethereum can be traded, and the platform is especially beneficial for exchanging Lumens into currencies for further transactions.

A unique inflation mechanism was incorporated into the Stellar network. Through this mechanism, the Stellar Lumen's supply would grow at a rate of 1% every year with the original supply at a hundred billion altcoins. However, it was outvoted, and now, the altcoin has a fixed supply of fifty billion coins. Of the total supply, twenty billion are purchased, exchanged, and utilised across the market, while the Foundation has held the rest toward advancing and developing the network.

Jed McCaleb is one of the founding fathers of Ripple as well as Mt. Gox. McCaleb has been cited for having been kicked out of the board of Ripple because of a not-so-stellar reputation after Mt. Gox hack. Even though Jed McCaleb did not have a good reputation in the industry, soon after he left Ripple Labs, McCaleb received an investment of 3 million from an Irish firm for Stellar. Stellar, today, is ranked the 11th largest cryptocurrency.

Would you consider investing in Stellar XLM?

While Bitcoin takes 8 to 10 minutes to process a single transaction, Stellar can process around 1000 transactions in just one second and that too at a nominal cost. The nominal fee is generally for the purpose of keeping the platform from encountering attacks.

The transaction processing protocol is a hallmark feature of Stellar. Unlike major cryptocurrencies, Stellar has a unique protocol called the Stellar Consensus Protocol (SCP) instead of the usual Proof of Work or a Proof of Stake. The SCP does not require miners and transactions can be processed quickly & safely. However, the downside of the protocol is that without miners, it is considered to be partially decentralised. The tokens have to be purchased from an exchange.

The partnership with IBM has really put Stellar on the radar of many investors as both IBM and Stellar are aiming for ambitious goals. Stellar together with IBM is aiming to bring financial inclusion to some very remote areas around the globe. Moreover, they are building financial infrastructure and have truly embarked on the mission of financial inclusion for all. Currently Stellar and IBM have targeted the southern pacific region which ranges from major economies like Australia to remote regions like Vanuatu.

The biggest concerns that investors have about Stellar is the team. The team, even though it includes various leaders and experts, yet it is small. The co-founder, Jed McCaleb's reputation, is also a big concern. He has landed himself in various lawsuits throughout his journey, and of course, he oversaw one of the biggest hacks of an exchange. In his defence, Jed McCaleb does have quite a few accomplishments under his belt, but critics tend to oversee those accomplishments.

On the bright side, Stellar is performing well and seems to be gaining more traction every single day.

Concerns about the team do not equate to concerns about the altcoin itself. Stellar has had a good reputation so far. Neither the altcoin nor the platform has been hacked as of yet. Although there was a relatively minor hack, where Lumens worth of $400,000 were stolen, the hack was possible due to shortcomings in the wallet, not because of Stellar Lumen. When it comes to the security of Stellar, one should keep in mind that Stellar is adequately secure to be utilised right as of now. Stellar is safe enough to be a part of IBM's worldwide blockchain activity then investors need not worry. This reality alone ought to talk a little to its degree of security because IBM would never band together with an insecure altcoin.

What Are The Drivers Of The Stellar (XLM) Price?

3 Factors That Drive The XLM Price:

The Stellar organisation is a non-profit, which is a bit unusual. The organisation does not operate for monetary rewards; instead, some of the goals of the organisations include eradicating poverty and financial inclusion of bankless individuals. Hence, social impact plays a huge role in the value of the cryptocurrency. Quite a few people invest in Stellar Lumens because of their social mission, and because of the impact, they believe the organisation is making. Stellar along with IBM has taken up a project in the South Pacific to provide financial services, especially in remote islands. Projects like these that the Stellar organisation is actively partaking have brought the cryptocurrency under the spotlight, and good things can be expected from Stellar prices in the future.

The king of cryptocurrencies, Bitcoin, is the market leader. Altcoins have tried to dethrone the king but have failed. Bitcoin has a huge impact on the cryptocurrency market, and most major cryptocurrencies have a positive correlation with Bitcoin. Any changes in Bitcoin will definitely affect the market and hence, Stellar. 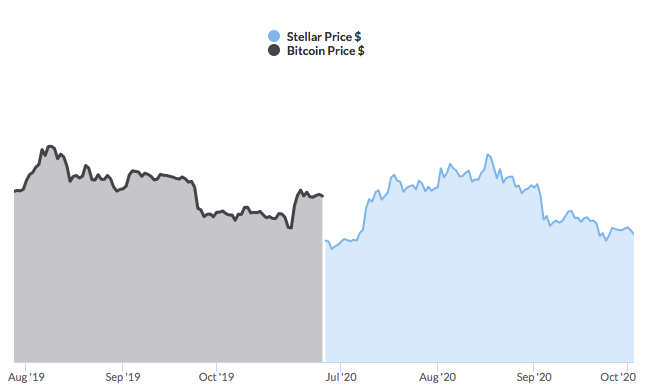 Moreover, with the ongoing debate about Stellar being a hard fork of Ripple, Stellar is somewhat similar to Ripple, and the altcoins are perceived to be strong competitors. Hence, changes in the value of Ripple can drive interest upwards or downwards for Stellar.

Stellar is operating very similar to platforms like Paypal. The features of Stellar make it ideal for micropayments, currency exchanges and overseas transactions. The Stellar organisation does aim to become the mainstream platform for digital payments and currency exchanges. As the adoption of the altcoin increases, its value is also going to go up. Increased demand for Stellar would drive its prices up. From current projections, it appears as though Stellar is paving its way to becoming the go-to platform for digital payments, and its adoption is going to increase exponentially in the near future.

Currently, Stellar Lumens is priced at $0.1667. Throughout the year, Stellars price oscillated somewhere around $0.9, but currently, some fluctuations upwards have been seen. These projections indicate that Stellar would start the new year on a positive note and can possibly climb even higher. According to eToro, the 1-year return rate is at 292%.

Even though the value of one token is pretty low, the overall market capitalisation of Stellar is very high, and the market sentiment is bullish, further indicating a positive start of the new year.

After an inverse head and shoulder formation through 2021, Stellar is expected to skyrocket and reach a new all-time high in 2023 to 2025.

Read More: Stellar Price Prediction — How Much Will It Be Worth In 2021 And Beyond?

Is Stellar (XLM) a Good Investment?

The Stellar blockchain network is an open-source circulated instalment foundation that encourages transactions. The Stellar environment expects to make cross-resource and cross-fringe exchanges simpler, quicker and more practical. Decentralised applications (or dApps) based on Stellar execute transactions without the cash going through outsider substances (and thus, cutting out various expenses and charges).

Unlike other major cryptocurrencies, the Stellar organisation is a non-profit, so profit is not the ulterior motive; instead, Stellar has the vision of financial inclusion. Stellar is also making sure that the altcoin is compliant with ICO regulations as it aims to become the largest payment platform in the world.

The Stellar platform can process chain transactions as well. This means that if the currency that you wish to exchange to is not available, then the platform will first exchange your money to an intermediary currency which has the option of the desired currency and then finally it will be exchanged to your desired currency. Stellar also has a built-in exchange that accommodates all transfers without an outside entity.

Apart from some bad reputation that the Stellar has acquired over the years, Stellar has been performing well. It is one of the largest cryptocurrencies and one of the cheapest as well as highly scalable. Stellar has great potential, and it could be a good investment.

Pros And Cons Of Investing In Stellar (XLM)

Pros of investing in Stellar:

✅ It takes merely a second for the network to process up to 1000 transactions.

✅ Jed McCaleb is a celebrity-figure as he has also founded Ripple and Mt. Gox.

✅ The cost of a transaction is nominal. Stellar is ideal for overseas transactions.

✅ Stellar is backed by some major financial corporations.

Cons of investing in Stellar:

❌ The Stellar Consensus Protocol does not require mining for processing of transactions, so the lack of miners has led to Stellar being partially decentralised.

❌ The founder, Jed McCaleb, has a bad reputation in the industry and has been involved in a few lawsuits.

❌ Stellar faces high competition, especially from Ripple, which makes it difficult for the coin to become more popular, highlighting its benefits.

Invest In Stellar (XLM) with eToro 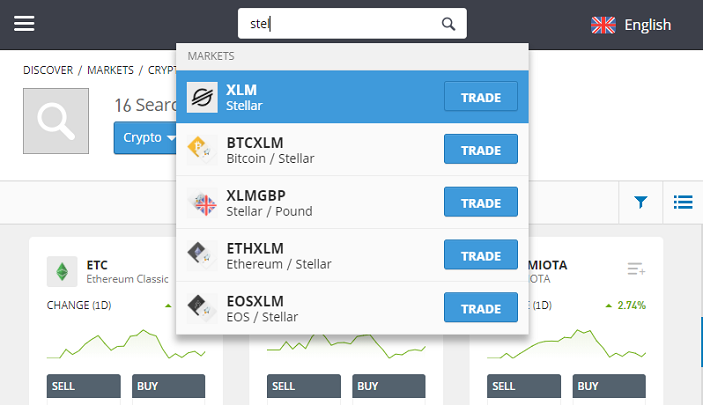 If you are looking into investing in Stellar Lumens, then look no further! Invest with eToro today. eToro has made investing in cryptocurrencies simple and easy. There are no complications, and you can set up an account in a few steps.

eToro's platform is accessible and easy-to-use. eToro also offers some of the cheapest rates in the market. eToro offers its hallmark social trading feature, which is ideal for amateurs who are new to cryptocurrency investment. Apart from social trading, eToro also has features well-suited for experienced traders.