AAVE has been a feature of the cryptocurrency market since its release in 2017. However, it has become a more interesting investment opportunity since the 2020 launch of its AAVE protocol. For those looking to add to the cryptocurrency area of their portfolios, AAVE is worth considering for investment in 2022.

The coin initial coin offering back in 2017 set AAVE up well, as they achieved an amount of $16.2M during this time. This established AAVE in the cryptocurrency market and began to get wider investment interest.

In this early period, the group was trading under ETHLend, as it uses the Ethereum blockchain like many other altcoins in the crypto market. AAVE focused on forming their decentralized peer-to-peer lending system early on before they settled on the liquidity protocol which they now use. The update triggered the name switch to AAVE and the token went from LEND to AAVE from this point onwards.

The main idea behind AAVE is that it is a protocol that uses liquidity pools to form a non-custodial open-source lending platform. It also supports depositing, borrowing and earning interest at a variable or stable rate. The protocol runs using the AAVE coin which is what the transaction fees are charged in.

Now that the AAVE protocol is a fully established part of the decentralized financial (Defi) sector investors are returning to look into this cryptocurrency. AAVE is a consistent feature within the cryptocurrency sector and is provoking itself against the market. This makes it worth looking into further if you are searching for a new cryptocurrency to invest in for 2022.

If you want to buy AAVE quickly and easily, with 0% Commission, check out eToro Exchange!

The coin itself is completely essential to the AAVE system as a whole. All improvements made to the system involve ownership of AAVE in order to make an input. This makes the AAVE cryptocurrency a vital coin to own for all users of the AAVE protocol.

Those with AAVE coins can also use the Safety Module provided on the platform to earn rewards and take fees after they stake their AAVE tokens on the platform. This can generate more profits, on top of the initial worth of the coins at that time and is an important factor for investors to consider.

AAVE is the AAVE protocol’s native coin. Despite briefly being known as LEND, the coin is now rebranded as AAVE. However, the fundamentals of the token have not changed.

Those acquiring AAVE find the protocol offers a flexible system for greater returns as users can borrow or deposit in whatever way suits them. Users can also generate income by acting as liquidity providers to those borrowing from the system using either over-collateralized or under-collateralized loans.

Read Also: Could Aave Be A Millionaire-Maker Coin?

Even for those looking to invest in AAVE as a cryptocurrency asset, it can be useful to know the system behind the coin. The AAVE protocol is open-source and so anybody can use it. However, it has been audited to assess and improve the security of the system.

Because of the interaction between the AAVE protocol and the Ethereum blockchain, there are inevitably fees along the way. These differ in amount depending on the transaction size and are charged in AAVE. Fees are common to the Defi world and can be found across the cryptocurrency market in varying amounts so it is important to always check the fee amount before making cryptocurrency transactions.

After you input an amount and register it via smart contract, you are likely to decide on a withdrawal point later on. Receiving your deposit back is facilitated by the liquidity pool part of the protocol. However, you can also trade or move amounts as aTokens. These are all factors to consider before investing in AAVE.

Ways To Earn With AAVE

AAVE is earned through a simple system in which assets are deposited onto the blockchain smart contract system. The interest can be earned in a variety of ways after this point. One of the core ways interest is generated is from the interest paid by those borrowing from the protocol, which then goes to those who initially deposited assets.

The system also charges fees for flash loans and those who have provided liquidity to the system then receive a share of that amount. Different assets that are deposited vary in demand, which affects the amount that can be earned. These changing rates are referred to as the Annual Percentage Yield and the platform provides the data from the last 30 day period which helps investors to decide on the type of asset to use.

The Defi sector is a volatile one so AAVE also allows those who have borrowed from the system to change their interest rates from fixed to floating and back again. This adds more flexibility to decide how best to utilise the protocol to your financial advantage.

Check Out: Pros and Cons of Investing in Aave

The AAVE performance has been quite consistent since its inception. The resistances and periods of sideways trading have not exceeded the expected levels for a cryptocurrency of this type. The performance of AAVE has been robust against the market and the coin value is comparatively high at about $385 at the time of writing. 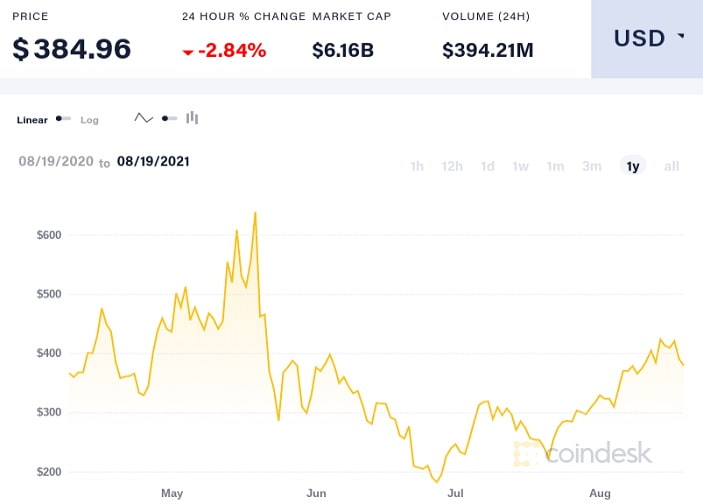 The trading pattern over the second and third quarters of 2021 have followed the patterns seen across the crypto market. The May peak came slightly later than expected and surged to a lower peak than was proposed earlier in the year. However, the correction at the end of May before the market-wide downturn was less dramatic than many other coins faced at this time. 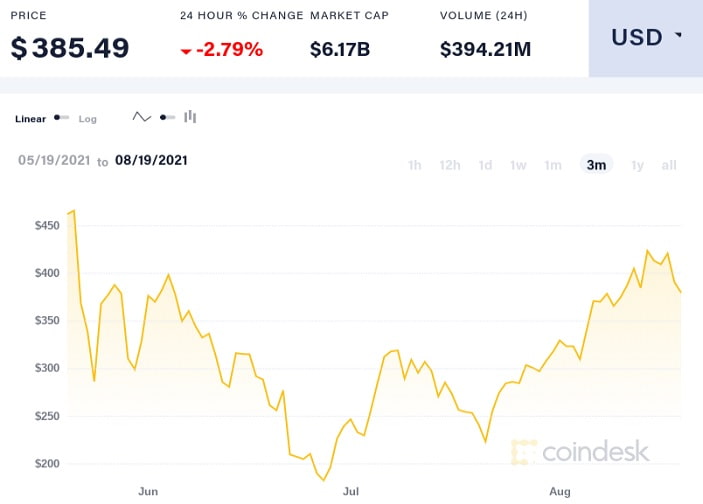 This was a reasonably positive outcome for AAVE investors as the coin price remained above the $450 mark. The price did not hold out during the bearish trading seen during the third quarter as the early June sideways movements gave way to a substantial drop. This dip was more rapid than expected but the downward trajectory was short-lived. This was an extremely good performance given the market-wide struggles as AAVE was not below $200 for long. 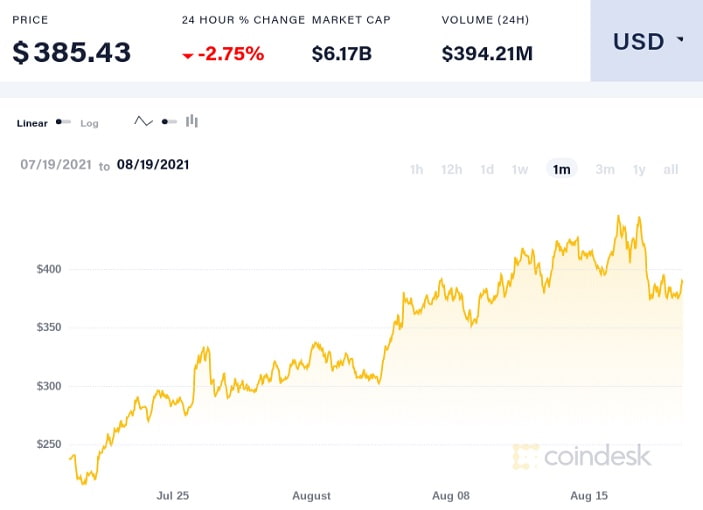 The early turnaround for the AAVE trading pattern has improved the outlook for this cryptocurrency for the remainder of the year and into 2022. There is now an upward trajectory emerging throughout August 2021, despite the volatile characteristics of the crypto market. This is setting AAVE up for a positive final quarter which is good news for those buying the dip.

Will AAVE Rebound From The Last Correction?

The post-correction rebound has been delayed so far due to the bearish trading cycles sweeping across the cryptocurrency market during June and July 2021. However, AAVE has shown good signs of an early recovery given the limited downward trading period shown during that time.

Now that the AAVE upward trading pattern is reestablishing itself, the likelihood of a substantial recovery of the post-correct losses is greatly improved. The current rate of improvement is slow, however, the position comparative to the market is quite positive.

The previous all-time high of $667 is only likely to be achieved in 2021 if a major upswing takes place during the final quarter. A surge of this kind is not expected to occur but becomes more likely as we move into 2022 where the greater rate of recovery is likely to take place.

Predictions for AAVE in 2022 and the Future

The long term prospects for AAVE are looking good as they have ridden out the highs and lows of 2021 better than many of their competitors. Despite the recent market slump AAVE has managed to achieve returns of 372% in the past year to date.

The surge, which was slightly below projections, during May 2021 has market experts hopeful that a much more substantial surge is in AAVE’s near future as we approach 2022.

The company’s movements are bolstering their positive profile within the market. AAVE recent commented on their inclusion in Fortune’s article citing them as frontrunners of the Defi industry:

‘The promise of DeFi is to give back autonomy to individuals over their own financial well-being.’

Fortune also mentioned AAVE as part of the Defi movement which is going to:

‘Change the way the world borrows, lends and saves.’

Some analysts are even expecting quicker growth for AAVE, projecting that the end of 2022 with land the coin near the $1,500 mark. Lower estimates are still backing values in the $1,000 range for 2022, with steady growth taking the price up more slowly in 2023.

Analysts are expecting a decline after this point, with many projecting losses for AAVE in 2024 and 2025. However, the highs prior to this are set around $1,600.

These figures are currently pointing to steady and prolonged growth for AAVE between 2022 and 2024.

In 2022 AAVE could potentially retest its all-time high and break past $650 and then progress above it towards $850. As per AAVE price predictions for 2022, Aave will likely form a new level of support at $900 and likely end the year around $950.

For those looking to buy the dip, the current conditions are good. AAVE has made a slow but steady recovery from the market-wide downturn and the price point has not yet returned to its expected level. This makes profit likely for those who buy during this recovery period.

The rate of returns during 2021 and early 2022 is likely to be steady, with the possibility of substantial surges rising as 2022 continues. If AAVE continues its positive performance throughout 2022 then it is likely that investors will see another surge taking place, moving the coin price up substantially from its current position.

Is It Worth Investing in Aave?

17 Reasons Why You Should Invest in AAVE Today

Should You Buy AAVE?

Who is behind AAVE?

The founder and CEO of AAVE, and its predecessor LEND, is Stani Kulechov. Kulechov is a programmer and developer of blockchain technology. Like many key Defi players, Kulechov came to the cryptocurrency industry before the age of 30 having gravitated from the financial programming world into fintech.

AAVE is an open-source lending and borrowing protocol designed to work using the Ethereum blockchain. It uses the native coin AAVE which replaced the LEND coin previously used when the protocol was known in its early days as ETHLend, before the rebrand and system overhaul in 2020.

How does AAVE compare to the market?

The market performance has been strong during the second half of 2021. AAVE is currently ranked 28th in terms of market capitalization which is a very promising position as the protocol is pushed forward in terms of market adoption and scalability.

The market cap is currently at $6.17B which makes it a strong player within the crypto market. It is also currently ranked 10th in terms of coin value at its current coin price of $385, occupying a very positive position as an altcoin.

AAVE is getting a lot of attention from investors following the quick turnaround after the market dip in June and July 2021. The swift return to positive trading has impressed market experts who are projecting positive trading for AAVE going forward into 2022. AAVE is worth further attention from those looking to add promising cryptocurrencies to their portfolio in 2022.

Is AAVE still going to go up?

The AAVE predictions are currently positive, with Aave likely to increase in value steadily over the next few years. The projections are placing AAVE at above $1500 by 2024-2026.

The rate of the increase is subject to volatile market conditions. However, the AAVE coin is very likely to go up from the current price of $385 at the time of writing, as we near the final quarter for 2021 and begin 2022.

Market analysts are expecting the next surge to take AAVE past the $1,000 mark. The projections put AAVE at between $1,200 and $1,500 by the final quarter of 2022 if the current trajectory continues. The final high is dependent on the strength of the correction following the next surge as the upward trajectory is likely to be stable on either side of the surge.