Bitcoin is attracting the eyes of large investors and prominent companies. 2020 has become the starting point of Bitcoin institutionalization. Differently called "The King of cryptocurrencies" in 2020 and at the beginning of 2021, Bitcoin has reached prices never seen before in its history of existence.

At the moment of writing, Bitcoin's price stands at $32,658. Since Bitcoin's price is hugely affected by its demand, its price has risen dramatically, reaching an all-time high at $41,941 on January 08, 2021, as big companies have invested large sums of money. 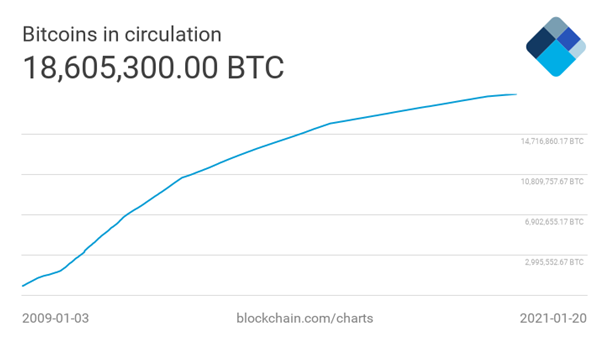 The entire amount of Bitcoin in circulation is over 18 million BTC. Source: Blockchain.com

The technology designed for Bitcoin is so sophisticated. Bitcoin is produced through mining.

Mining computers authenticate blocks of transactions by competing to solve complicated mathematical problems every 10 minutes. The first miner to solve the problem and clear the transaction gets rewarded with new bitcoins.

Every four years Bitcoin goes through a process called "halving". Halving Bitcoin reduces the rate at which new coins are created. In May 2020, Bitcoin went through a third "halving", in its history, which means that supply is getting restricted even more.

On top of that, we have Paypal allowing its users to buy cryptocurrencies in their platform and purchase goods using cryptocurrencies as a payment form. Also, large, credible companies invested massive amounts of money in Bitcoin, such as Microstrategy with $1.3 billion.

So Bitcoin supply is declining, and we are heading to a point where there will be no supply anymore. There will only be demand for Bitcoin, which means the price can only increase.

Analysts believe that Bitcoin could reach figures like $100K, $500K or even $1 million. But, is that a possibility or is it just an exaggeration? Let's find out below.

Have you considered buying Bitcoin?

According to many analysts Bitcoin could hit $100,00 by 2021. Although six digits may seem mission impossible for many, it appears that such a thing is possible when it comes to Bitcoin price predictions,

The creator of Stock-to-Flow (S2F) popular Bitcoin prediction model Plan B tweeted in November 2020 that Bitcoin could hit $100K by December 2021.

According to Plan B, there is clear evidence that Bitcoin supply is decreasing. He mentioned that he trusts his model in his tweet and that "Bitcoin will tap $100K-288K before December 2021." As we mentioned above, Bitcoin halving occurred on May 11, 2020, restricting supply even more by decreasing the rate at which new coins are being created. Therefore, Bitcoin could increase in price.

Furthermore, Brian Estes, chief investment officer at hedge fund Off The Chain Capital, said that for Bitcoin going from $18,000 to $100,000 in one year is not a stretch.

Fitzpatrick said that Bitcoin could climb as high as $318,000 by the end of 2021, indicating its limited supply, cross borders ease of movement and enigmatic ownership.

Also, JP Morgan said in a note that Bitcoin could rise to $146,000 in the long term as it competes with gold. JP Morgan sees Bitcoin as an "alternative" currency, with millennial investors preferring the "digital gold" over traditional gold and stimulating demand for the cryptocurrency.

"While we cannot exclude the possibility that the current speculative mania will propagate further, pushing the Bitcoin price up towards the consensus region of between $50k - $100k, we believe that such price levels would prove unsustainable," the note said.

Analysts believe that Bitcoin could go way beyond $100K, towards the $500K mark. Back in September 2020, Mike McGlone, Bloomberg Intelligence analyst, said that "Bitcoin could hit $500K or it could fail."

Bitcoin Could Hit $500,000, The Founder and CEO of Ark Invest Catherine Wood said that as institutional demand for Bitcoin could drive Bitcoin's price to $500,000.

Catherine said the price of Bitcoin could rise "to somewhere in the $400,000 to $500,000 range." Woods further pointed out that Bitcoin is the most recognized currency of the crypto-asset ecosystem "equivalent to the dollar in the fiat currency system."

"The question in our mind is not so much does it get to $500,000, but how quickly?" Tyler Winklevoss said during the podcast. "I would sort of contend that $500,000 Bitcoin is actually pretty conservative and the game hasn't even really started," Cameron added.

The twin brothers said that Bitcoin institutionalization has begun, but this is still the early stage as Wall Street hasn't been involved yet.

"Wall Street is not here yet. Institutions aren't in Bitcoin right now. It's been a retail phenomenon for the last decade. So Wall Street talks about it, they're aware of Bitcoin, but they're not really in it from our perspective, but it's starting to happen," Tyler Winklevoss said.

Bitcoin will surge to $1 million in 5 years by an 'enormous wall of money,' former Goldman Sachs hedge-fund chief said.

Analysts already believe that Bitcoin can reach $1 million. Since Bitcoin has shown its potential with the price increases it experienced recently and given the factors mentioned above;

Coinfund's managing partner Seth Ginns speaking for Bloomberg pointed out that Bitcoin could reach the $1 million mark by 2022.

He stressed that the critical factor that can influence Bitcoin's growth is its institutionalization. According to him if we look at the pattern recognition of Bitcoin's 4-year cycles, a $150K to $250K looks like the base case. Ginns further said that Bitcoin could reach $1 million by 2022, which is a shorter period than expected by many.

Furthermore, Clem Chambers, the CEO of private investors website ADVFN.com, in an article for Forbes, admits he is convinced Bitcoin could reach $1 million.

He further elaborated that printing money is going to increase inflation, which could push investors to buy more Bitcoin.

"Right now there are only about 18 million bitcoins (with a maximum of 21 million), and if any major economy or group of minor countries melted down into hyperinflation that alone would drive crypto into orbit in dollars", Chambers wrote.

Moreover, earlier in 2020, in an interview with Stansberry Research Raoul Pal, the former Goldman Sachs hedge-fund manager who founded Real Vision, said that Bitcoin price could hit $1 million in five years. Pal noted that "there is an enormous wall of money coming into this."

Besides, he said this could happen because there is a great deal of interest to invest in Bitcoin.

However, it should be mentioned that no one can know precisely what the price of Bitcoin may reach in the future, although the above BTC predictions come from credible financial analysts. Considering the demand by institutional investors and the way the market is developing, it is possible for Bitcoin to reach the above figures.

We must also keep in mind that cryptocurrencies are attractive to millennials who are not very interested in stocks, bonds or real estate. They see cryptocurrencies as a way to become independent of the traditional financial system. So with the change of generations, the demand for Bitcoin could also increase.

Have you considered buying Bitcoin?

Why Should You Invest In Bitcoin With eToro?

eToro is an easy-to-use platform. What differentiates eToro from other platforms is that you can learn within the platform if you are a beginner, since eToro is a social trading brokerage, where traders share news and events, helping each other. But, eToro is a platform that suits experienced investors as well. In addition to cryptocurrencies, in eToro, you can invest in commodities, currencies, indices and ETFs.