So, are these mere empty words, or do solid fundamentals actually back it? Let’s take a look.

MoneyGram soars thanks to Ripple

Back in 2018, Ripple made a significant partnership with MoneyGram, a US money transfer company. It seems like the latter has started reaping the benefits of this partnership over this year.

There has been a significant increase in the number of cross-border transactions, which bodes very well for Ripple. MoneyGram’s CEO, Alex Holmes, himself noted that cross-border settlements had 11 straight months of humongous growth. MoneyGram conducted a survey wherein they found the following: 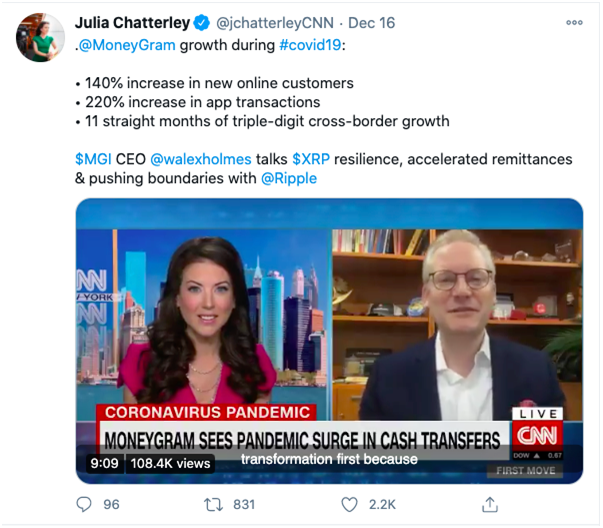 According to Holmes, their near 2-year partnership with Ripple has made transactions significantly faster.

"So for us, having access to liquidity, fast transaction, and throughput is really what I think can be transformative for our industry and business in particular in the coming decade, and Ripple is doing a lot of unique things with blockchain to help drive that." 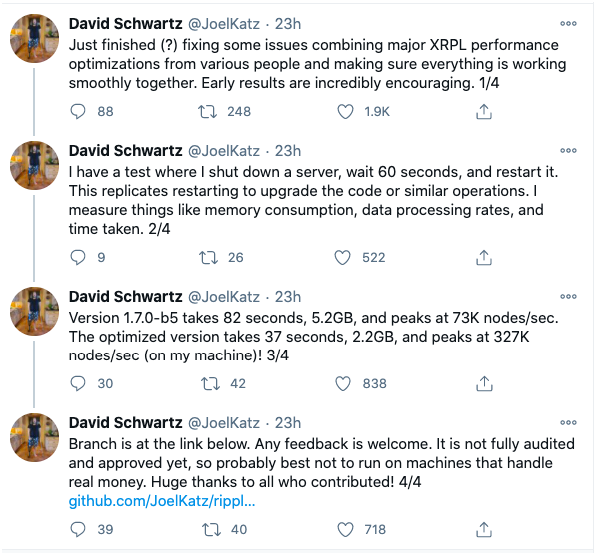 As per the CTO, the system performance was stress-tested by restarting the system with a 60 seconds pause. To understand how significant this change is, the current version, v2.7.0.-b5, takes 82 seconds to synchronize while consuming 5.2 GB of memory and can process up to 73,000 nodes per second.

On the other hand, the upgrade can synchronize the system in 37 seconds, which makes it at least 50% faster. The restart consumes only 2.2 GB of memory. Speaking of the nodal processing power,  the upgrade allows the network to process 327,000 nodes per second.

Along with MoneyGram, Ripple has an impressive list of partners, including – Bank of America, Standard Chartered Bank (SCB), National Bank of Fujairah PJSC (NBF), Santander, SBI Holdings, etc. It looks like they are not quite done.

Several analysts have predicted a bullish 2021 for Ripple, and it is easy to see why. Not only is the cross-border remittance token backed by solid fundamentals, but with the improvements made to the protocol and an ever-growing list of partners, the future looks pretty bright for XRP.

How to Invest in Ripple 2021: The Ultimate Beginner’s Guide

What Will Drive The Ripple XRP Price in 2021?

Ripple Price Predictions: How Much Will Ripple Be Worth In 2021 And Beyond?