Will Londex go up or crash? Read our Londex price predictions for 2022-2030

Should I invest in Londex (LDX)? Could Londex be a good investment? How much could Londex be worth in 2022 and beyond? Keep reading for everything you need to know.

Arriving on the crypto scene in August 2021, Londex (LDX) is still rather young which can mean forecasting its future price can be difficult.

Seemingly coming out of nowhere, Londex has so far provided early investors with an ROI of 239.89% in less than two months and fast become one of the most hyped cryptocurrencies on the market.

After increasing 322.76% in 30 days, what’s next for the price of Londex? Will it continue to rise or is it all just a fad? Let’s see what crypto experts are predicting for the new asset.

If you want to buy cryptos quickly and easily, check out the eToro!

What Is Londex And How Does It work?

By holding the Londex token, users are passively rewarded in BEP20 Ethereum every 30-45 minutes with no action required. Londex plans to expand its platform to build a variety of services, including:

Our first short-term Londex price prediction comes from WalletInvestor which has forecasted that LDX will continue to increase in a very linear fashion throughout 2022, as their graph shows below. 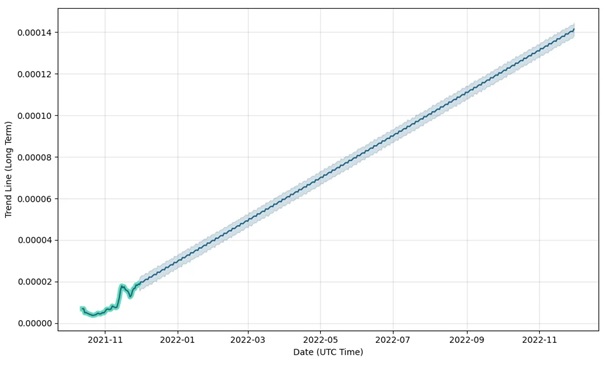 Considering Londex ‘bullish’ based on its performance over the last 30 days, WalletInvestor adds “According to our Forecast System, LDX is an awesome long-term (1-year) investment”. They also explain that “The Londex price can go up from 0.000021 USD to 0.000142 USD in one year,” and “The long-term earning potential is +573.99% in one year”.

Here’s what WalletInvestor has forecasted for the price of Londex by the end of 2022:

This is an astoundingly positive price prediction for Londex. Even the lowest price WalletInvestor has predicted, $0.000148, is seven times higher than LDX’s current price of $0.00002094. Furthermore, the lowest price WalletInvestor has predicted for the entirety of 2022 is $0.000027, which is already higher than LDX’s ATH of $0.00002104.

Our next 2022 Londex price prediction comes from DigitalCoin, which has estimated a very different trajectory for the asset, as we can see from their graph below.

DigitalCoin expects Londex to have a fairly bumpy 2022. After starting the year at its highest price of $0.0000395946, it will decline in February, recover in March, stagnate at a yearly low between April and June, begin to recover in July, retest its yearly high in October, and finally hit its lowest price for 2022 in December.

While that sounds pretty bleak, clearly suggesting that Londex will lose value, the prices DigitalCoin is suggesting are significantly higher than what they are today.

Here’s what DigitalCoin has forecasted for the price of Londex in 2022:

The maximum price predicted by DigitalCoin of $0.0000395946 is almost five times lower than WalletInvestor’s maximum prediction of $0.000155. Nevertheless, DigitalCoin is still positive about Londex’s prospects in 2022, explaining that “Londex (LDX) price will increase according to our predicted data in future,” and “Londex (LDX) is profitable investment based on our forecasting”. 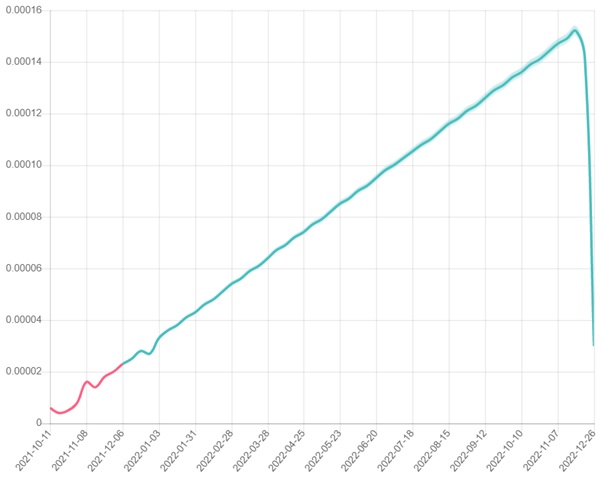 Gov Capital expects the price of Londex to rise continuously throughout 2022 until a point in either November or December where it will drop dramatically. Gov Capital also explained:

For the end of 2022, Gov Capital has predicted the following prices for Londex:

What Will Happen To The Price Of Londex In 2022?

Additional price predictions for Londex in 2022 include:

What are crypto experts expecting for the price of Londex from 2023 and beyond? With Londex expected to do so well in 2022, early investors are likely asking themselves: ‘could LDX perform better in the long-term?’ So far, price forecasters are quite positive on LDX’s prospects, though they do not all agree on its momentum and the trajectory it could take over the next several years.

For our first long-term Londex price prediction, we’ll return to DigitalCoin which has forecasted a gradual increase to 2028, as the graph shows below. 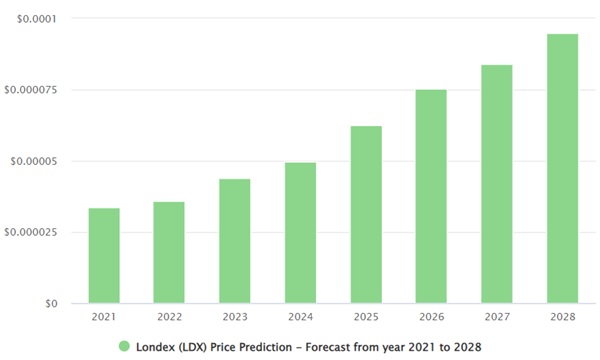 Year-on-year, DigitalCoin expects LDX to appreciate, with nothing getting in its way.

Here’s what DigitalCoin has predicted for the price of Londex from 2023 to 2028:

Though DigitalCoin has forecasted a positive trajectory for the price of Londex from 2023 onwards, the above prices are quite low in comparison to what we saw from our 2022 forecasts. By 2028, DigitalCoin remains doubtful that Londex could surpass $0.0001, which WalletInvestor and Gov Capital are confident could be crossed by 2022. Given that DigitalCoin’s highest prediction is $0.0000947161 by 2028, this could suggest that Londex will not reach $0.0001 until at least 2029.

Our next long-term Londex price prediction comes from Price Prediction which has forecasted the price of LDX to 2030. The first years of Price Prediction’s forecast are not too far off what DigitalCoin has estimated, but from 2025 onwards, and 2026 in particular, Price Prediction expects a lot more from LDX.

Here’s what Price Prediction has forecasted for the price of Londex from 2023 to 2030:

“In terms of price, Londex has an outstanding potential to reach new heights. It is forecast that LDX will increase in value. According to specific experts and business analysts, Londex can hit the highest price of $0.00065040 till 2030”.

Here is what CoinDataFlow’s forecast concluded for Londex from 2023 to 2025:

CoinDataFlow suggests at the very highest, if Londex had 100% of Bitcoin’s previous average growth per year, by 2025 it could reach a high of $0.00351 — five times higher than Price Prediction’s highest forecast for 2028. This is insanely high, particularly when you consider that many forecasts fixate on what LDX could surpass $0.0001, and that alone is considered bullish. Instead, CoinDataFlow suggests that if Londex has just 50% of Bitcoin’s previous average growth, it could reach $0.0001 by 2023.

On the flip side, we also have to consider the lower price predictions CoinDataFlow has suggested. As shown in the table above, if Londex has only 1% of Bitcoin’s yearly average growth it will essentially stagnate between $0.000022 and $0.000023 from 2023 to 2025, which is significantly lower than what DigitalCoin and Price Prediction have forecasted.

What Will Happen To The Price Of Londex In 2025?

Additional Predictions For The Price Of Londex In 2023-2027 Include:

Check Out: 9 Best Cheap Cryptocurrencies to Buy Under $5

Now that we have seen the top price predictions for Londex from 2022 to 2027, let’s compare them and form our own conclusions on where the price of LDX could be heading for the remainder of the decade.

The below prediction figures outline some of the potential highs and lows of Londex price prediction forecasts for 2022, 2023, 2024, 2025, 2027 and 2030 offered by technical analysts and industry experts.

Would you consider buying Londex?

How Has The Price Of Londex Changed Over Time?

The first thing to note when looking at how Londex has changed over time is that its price has only been tracked by CoinMarketCap since the 13th of October 2021, so there is very limited price data to analyse, as you can see from the graph below.

Despite this, we can make a few small observations. When CoinMarketCap started tracking LDX’s price, it traded at a minuscule $0.000006368 and quickly rose to $0.000007656. This was likely a response to LDX being listed by CoinMarketCap. However, on the 14th of October Londex began to decline sharply and by the 21st of October, LDX hit its all-time low of $0.00000344 — roughly half its initial value. Most likely this was a result of early investors selling their tokens for a quick profit after the asset initially rose.

What Factors Affect The Price Of Londex?

Price predictions are extremely unreliable because they cannot tell you when certain factors will come into play and impact the value of Londex. Furthermore, as LDX is super young, it is harder for price forecasters to figure out its future price.

By understanding the factors that impact the price of Londex, you can reduce your exposure to risk and take profits at the best possible moments.

1. The Price Of Ethereum

As one of the primary benefits of holding LDX is receiving free Ethereum (ETH) tokens, it isn’t too surprising that the price of Ethereum (and interest in the Ethereum network in general) is a major factor in the price of Londex.

If Ethereum does particularly well, crypto investors may look into investing in Londex as a cheap way to earn ETH passively and increase demand for LDX. But this also works both ways — if interest in Ethereum declines, it could also mean a decline in demand for LDX.

The Binance Smart Chain is fast becoming one of the top smart contract platforms for DeFi (decentralised finance) projects. If Londex is successful in building the different services it plans to create, it could offer a lot of utility to different services that are already operating on the blockchain.

If you remember anything from Londex Price Predictions: How Much Will LDX Be Worth In 2022 And Beyond? Make it these key points.

How To Buy Cryptocurrencies With eToro?

If you want to trade cryptos just like Londex, head over to eToro and complete these three simple steps.

Step 1. Jump to eToro’s website, click ‘Join Now’ on the top right corner, and fill out your info. You will need to upload proof of ID and address (this is to prevent fraud and to comply with anti-money laundering laws).

Step 3. On eToro’s platform go to ‘Trade Markets’ → ‘Crypto’ → choose the cryptocurrency you want to invest in and choose your terms.

Top 10 Best Cryptocurrencies To Invest In For High Returns

Is Londex A Good Investment?

What Is The Future Of Londex?

If Londex can draw in investors who wish to earn Ethereum passively and build the services it aims to provide to the Binance Smart Chain, the future of Londex could be very bright. Most price forecasters are expecting the price of Londex to increase in both the short and long term.

Londex will not reach 1 cent between now and 2030 with the highest price prediction suggesting LDX could reach $0.00351 by 2025, and even this is incredibly bullish.

Not for the foreseeable future. No price forecasters are brave enough at this point to suggest when Londex could (if ever) reach $1 per coin.