What Is Dash? A Beginner’s Guide To Dash and Tips Before Investing In It

Initially known as Darkcoin, Dash was released in 2014 and was designed to ensure consumer privacy and confidentiality. In truth, the white paper of the cryptocurrency, co-authored by Evan Duffield and Daniel Diaz, defines it as “the first cryptographic currency centered on privacy” drawing on the findings of Nakamoto.

Dash has a hard cap of 18.9 million coins, which ensures that only 18.9 million Dash will ever be made. There are 10.4 million coins in circulation at the moment. In several aspects, Dash is an archetypal cryptocurrency. Dash follows in the footsteps of Bitcoin and Satoshi Nakamoto’s initial great vision, quite unlike cryptocurrencies like Ethereum and Ripple, which sought to reinvent the wheel. It aspires to be a competitive alternative for daily purchases to fiat currency as a medium.

Initially, to ensure anonymity, Dash was established and was known as Darkcoin. The project founder reinvented the aims of the cryptocurrency later on and labelled it Digital Cash or Dash. Like Bitcoin, Dash often depends on miners to verify transactions. However, by introducing the idea of Masternode, it has made several adaptations to the mechanism.

For its unusual approach to the market, the coin earned popularity. Dash focuses more on confidentiality and transaction rates. Dash transfers are also near-instantaneous and almost difficult to track.

Due to its impressive assortment of features, Dash grew a lot of fame around its initial launch. When Dash released its features, most of these traits were new to the industry; hence they caught on attention. Dash continues to be a revolutionary force within the privacy coin market in this way.

In January 2014, the cryptocurrency was introduced as “Xcoin” by Evan Duffield, as a Bitcoin protocol fork. Duffield, a web developer who has been investigating Bitcoin since 2011, saw the lack of anonymity of Bitcoin as a flaw and worked to build on it. He developed recommendations to Bitcoin’s developers about incorporating this, but instead, he started designing his own altcoin after they rejected his suggestions.

Dash is an altcoin which was subject to pump and dump hype in its early days. It was later restructured and labelled as Darkcoin when Duffield determined it would be wise for the project to promote its privacy capabilities further. The rebranding, however, resulted in the darknet markets becoming a hallmark of Dash. Seeing the drawbacks of this process, Duffield rebranded the coin again. It was rebranded as Dash this time. The word Dash comes from the mixture of the words "digital" and "cash." Notably, Dash was no longer used commonly on the Dark Net by 2016 and there were approximately 1.9 million coins already mined at this stage.

Dash began to evolve, and its price grew slowly. The highest price growth took place in 2017, a year that saw significant growth across the global industry for cryptocurrencies. After that, in early 2018, it started to fall, again mimicking the larger demand for cryptocurrencies.

Read More: How Much Will Dash Be Worth In 2021 And Beyond?

There are minor worries regarding Dash and any cryptocurrency for that matter. It’s good to be aware of all factors when considering investing in the crypto market. Some, for example, worry about its visibility due to its brand reputation. Considering that Dash has changed its name twice at this point, it’s difficult to research into depth for it.

Due to its low barrier entry, the Dash group has voiced doubts about masternodes voting improperly and without proper information or experience. The competition also poses a disadvantage for Dash.

Why Invest In Dash?

Dash has multiple attractive features that are difficult to ignore when comparing cryptocurrencies. Let’s take a look at a few of them.

4 reasons as to why you should invest in Dash:

A particular Masternode acknowledges the request as users request an InstaSend and locks the transaction’s inputs. The transaction data is then transferred to other masternodes across the network. This technique ensures that the transaction is located in the next transaction block.

Chainlock is another important element that Dash implements. When used in parallel with InstaSend, this protocol defends against 51 percent of attacks. A 51 percent attack happens when incorrect data is implemented by more than half of a Blockchain node.

The Dash group concluded it was best to try a faster upgrade plan after having encountered some difficulties with a 2014 update called RC3. This urge led to Sporks being made. Sporks make big improvements, but without the need for immediate improvements, such as soft or hard forks.

In a multiphase approach, the Spork updates join the blockchain. This methodology enables developers to track data related to the update in real-time. In comparison, it helps the network all at once to eventually render the upgrade without its credibility.

One of the most advanced functionality Dash uses is its protocol for Private Send. This protocol helps Dash users on the blockchain to make and receive untraceable transfers. The manner in which the method works is clear.

Next, a customer demands a transaction from PrivateSend. Until performing the transaction, the platform then takes the transaction and combines the customers’ unspent Dash. Next, once they are regular denominations, the protocol tears the transaction inputs down. The user's wallet then sends a message to the Masternodes from there. This request is met when equivalent requests are submitted by two other persons.

Then, a masternode combines all inputs and instructs the wallets of all three users to pay back the now-transformed input. Your wallet is restoring the denomination to itself. Interestingly, the wallet uses what is known as an address for adjustment. Crucially, the wallet repeats this operation several times. Best of all, this happens in seconds and without needing extra steps for users to complete. 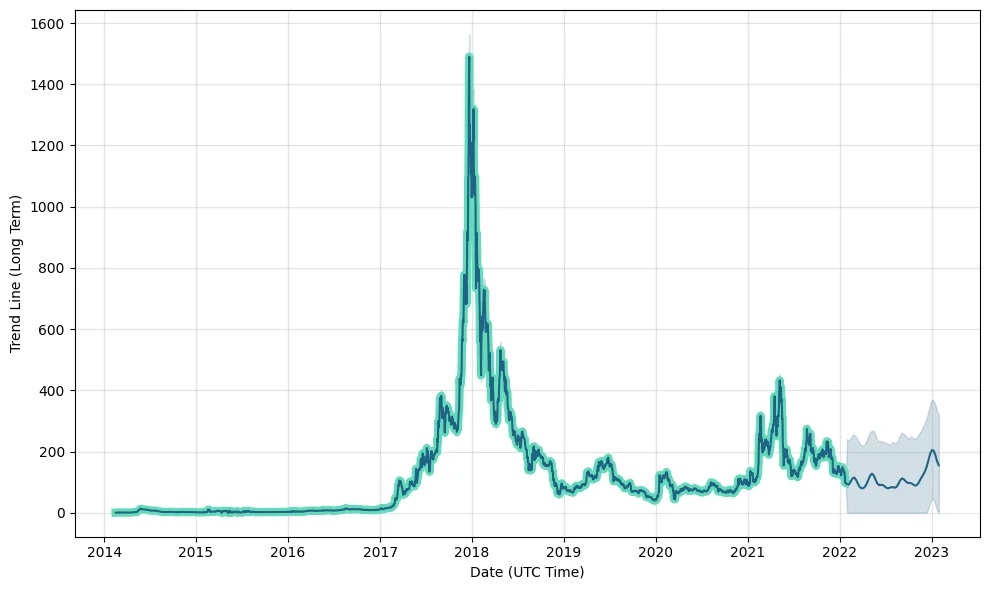 Dash price could increase in the coming years, according to CoinSwitch’s Dash future price forecast. If the need for privacy and the pace of acceptance increases, so does the appeal of Dash, too. CoinSwitch forecasts that the Dash price will begin to expand to $1,500 by the end of 2025.

How To Invest In Dash?

If you simply want a walkthrough of how to make a Dash investment in less than 5 minutes, follow the 5-step process outlined below!

Step 3: Choose how much Dash you want to invest

Step 5: Leave your Dash stored at eToro until you decide to cash out

If you want to invest in DASH quickly and easily, check out eToro Exchange!

Buying Dash is nothing out of the ordinary, and nowadays is actually quite simple. The credibility and durability of the coin have allowed for higher access in terms of trading on many large platforms. Once you find the platform that suits you the most, you’ll register for an account to get started. Most platforms will ask for identity verification, so keep this in mind.

You’ll have to finance your account once you enroll. You can do this via bank transfer from a loan or through a debit card. Once your account begins working, you may then turn your fiat into Dash now that you have funds available.

In the scheme, masternodes play a significant role. They are absolutely integral to Dash’s greater stability, synchronize user activities, and spread data among all users. Dash enjoys a high degree of decentralization due to the efforts of masternodes. In addition, the management of the cryptocurrency provides every user to become an official agent of one of the masternodes of the network and receive extra compensation.

Tips Before Investing In Dash

1. Get your hands on a crypto wallet

As described above, digital wallets are basically small hardware tools or, in some cases, a software portal such as an app where cryptocurrencies are safeguarded by investors and traders. For anyone intent on spending substantial sums, it is a smart idea to get a hold of a wallet.

There will be private keys for each wallet that only you will have access to, guaranteeing security for your Dash coins. eToro has launched its authentic exchange and wallet eToroX where you can keep your coins safely.

In general, given its short history and already unpredictable conduct, it is wise to keep your initial investment in Dash relatively small. So, invest as much as you can afford to lose. Therefore, maintain your investing discipline, buying just like you would hope to potentially fail in the middle of speculation and forecasts and not get carried up by promises of giant upswings.

Suppose you’re someone who’s attracted by day-trading. It’s wise to look at stashing your Dash coins for the long term. This causes less risk, making it easy for you to expect high rises in valuation. Any patience with any higher premiums can be worth gaining with the ambitious predictions being put for Dash.

Holding an eye out for trends and alerts is one of the core crypto-investing techniques. Signs let you know that it might be a good time to get ready to invest. Market dynamics will help identify how Dash can be effective in the near term and over longer periods. However, it’s always good to keep in mind external forces. There are some metrics that influence Dash values, as well. It’s possible here to take Covid-19 into account. The crypto market dropped in March 2020 due to the pandemic, and Dash was also influenced.

New regulations, in addition to the possibility of complicated reporting processes, would also impact tax liabilities. The U.S. decision on property means that your income is now considered to be a levy on capital gains (15%) rather than a normal income tax (up to 25%).

In different countries, cryptocurrency tax terms are different, and many will adapt when they respond to the changing market. With that said, it’s wise to keep a logbook of your Dash transactions, along with any other crypto you may have, to avoid any future legal issues.

Dash continues to be one of today’s most popular cryptocurrencies in usage. This unique project is a prime example of how blockchain technology offers people more freedom and transparency. Additionally, you can expect to see Dash continuing to play an important part in the crypto industry for years to come.

Start Investing In Dash With eToro

eToro is one of the best platforms where you can start your cryptocurrency investment. The company continues to expand by introducing new products and other cryptocurrencies on top of Dash, allowing beginners and experts to explore various possibilities in the crypto world.