What is Ethereum? A Beginner’s Guide to Ethereum and Tips for Investing in ETH

Ethereum has been sparking conversation in the last year as it is coming up as the second-largest cryptocurrency after Bitcoin. However, unlike Bitcoin, Ethereum is a multi-trade platform used to “codify, decentralize, secure and trade just about anything”.

Ethereum hit its all-time high of $4,891.70 on November 16th 2021 and it's currently trading under the $4000 mark. Ethereum poses many advantages over other conventional cryptocurrencies such as Bitcoin and rival currency Litecoin. It’s been widely adopted by companies and startups as a method of transaction and trading of things beyond cryptocurrencies.

Many people are curious about what Ethereum really is, where it all began, and how to invest in it considering its 2021 blow-up. It is also necessary to remember the dangers of investment and the ability to mine it and develop your own wealth off of Ether.

The world’s second-largest cryptocurrency, known as Ethereum, is an open-source, decentralized software platform that initially launched in 2015, for its own cryptocurrency, Ether. On top of being a platform, it is also a programming language used for building, deploying, and using various applications, such as Microsoft’s partnership with ConsenSys. These applications usually don’t have a home for just a single computer but are distributed over multiple computers for more safe and secure infrastructure.

Applications run on Ethereum are run on a cryptographic token, Ether, which is unique to the network. These tokens act as transport around the Ethereum platform and are most often used by developers who want to integrate and construct their own applications within the platform.

Ether can be used for two broader definitions; firstly as a digital currency exchange such as Bitcoin or Ripple, and secondly as a key to running applications and profiting off them on the platform. Ethereum can be used to “codify, decentralize, secure, and trade just about anything.” Ether is the digital cryptocurrency allowing operations on smart contracts and dApps built on Ethereum.

As an example, Microsoft’s partnership with ConsenSys offers “Ethereum Blockchain as a Service (EBaaS) on Microsoft Azure to offer clients a cloud-based blockchain developer environment only through a single click.

Ethereum’s co-founder Vitalik Buterin got involved with Bitcoin in 2011 as a young programmer, curious and attracted by blockchain technology. This led him to envision a network larger than Bitcoin’s initial uses for financial purposes. With this, he published a white paper in 2013 outlining what would soon become Ethereum. The biggest difference between Bitcoin and Ethereum was Ethereum’s ability to trade more than just cryptocurrency.

Buterin and other co-founders of the multi-trade platform raised over $18 million in 2014 after kicking off a crowdsourcing campaign where they sold Ether tokens to give their vision a launch off the ground. Following this, Ethereum had its first live launch in 2015, known as Frontier. Today Ethereum is known as the second-largest cryptocurrency and has over hundreds of developers involved.

Ethereum was split into two blockchain divisions in 2016 following the theft of over $50 million in funds collected on the DAO, a series of smart contracts derived from Ethereum’s software network in 2016. The two divisions are now called Ethereum and Ethereum Classic.

A hard fork from the original program designed to defend against more ransomware attempts found the new Ethereum. Ethereum was then named the second-largest virtual currency on the market as of September 2019 following just behind Bitcoin.

Since 2017, Ethereum developers have been working on moving the network from a proof-of-work system to a system of proof-of-stake (PoS). The project, known as Casper along with its application, may have a significant influence on Ether. The Ethereum network was subjected to a challenge bomb as a part of the Casper switch to PoS that would bog down transactions on the network and cause an ‘ice age’ where transactions would cease to process and the network freezes.

The Istanbul hard fork was deployed at the end of 2019 by Ethereum developers, which created a drastic upsurge in block processing time. This was attributed to the complexity of mining blocks to suit the upgrade that the developers could not tweak. The Muir Glacier update was launched on January 1st, 2020 when the chain reached its block #9,200,000, pushing the challenge bomb for at least another 4 million blocks.

The efforts put forth by the creators of Ethereum to diminish the challenge bomb and buy more time shows their emphasis on security and certainty and thus placing confidence in those seeking to join Ethereum.

Why Invest In Ethereum?

Considering that Ethereum is the second-largest cryptocurrency, it most definitely holds as a strong investment relative to other cryptos. Despite the fluctuations in Ethereum’s history, analysts agree that the price of Ethereum will rise further in the long run.

Since Ethereum is at the top of DeFi the potential for price increases is huge. Analysts are seeing DeFi as a worthy competitor to the current centralized traditional financial system.

Ethereum surged to $4,891.70 in November 2021. If the Ethereum blockchain continues to be adopted, which is very likely to happen, then the price of Ethereum could rise, according to crypto analysts. James Todaro Blocktown Capital managing partner predicts Ethereum price to go as high as $9,000.

Ethereum 2.0, Ethereum’s second version, is one of the reasons that will influence investment decisions in Ethereum. Ethereum 2.0 will concentrate on energy production and refining instead of mining. Keep in mind that proof of stake will require a crypto wallet for transaction identification and authentication to ensure the safety of funds.

How To Invest In Ethereum?

First thing’s first, you need a digital wallet if you’re looking toward investing in Ethereum and especially Ether. You won’t be able to find Ethereum on any major stock exchanges, and you can’t go to a broker to find online deals. It will be converted to your pocket. They are essentially small, offline computers that allow you to manage your Ether. There are many digital wallet manufacturers such as Coinbase and Trezor, among others.

Do not be misled by the digitization behind cryptocurrencies. It’s crucial to keep in mind that Ether (ETH) is a currency and that as an investor, you should regard it as such. You don’t purchase Ether’s shares, just as you can buy stock or ETFs. Instead, you exchange your dollars for tokens of Ether.

In addition to this, there are no payouts or dividends when you invest in Ether. Your best dream is that in the future you will be selling more for your tokens to other users on the Internet than what you bought them for initially. One of the best platforms where you can buy Ethereum is eToro.

Ready to Invest in Ethereum ETH?

Tips And Strategies Before Investing In Ethereum

1. The use of a crypto wallet

Digital wallets are essentially miniature hardware wallets, where people store their cryptocurrency. It’s a good solution for those who plan to hold large sums and are looking for a secure option to their assets.

Ethereum’s second version, Ethereum 2.0, will require you to have a crypto wallet in order to validate transactions. Your hardware wallet will have private keys to which only you will have access to and thus ensuring the safekeeping of your investments. They are essentially small, offline computers that allow you to manage your Ethers (ETH).

eToro has launched its authentic exchange and wallet eToroX where you can keep your coins safely.

This goes for any investment. However, it’s always healthy to keep in mind, particularly when looking to invest in Ethereum, that you shouldn’t invest more than what you can afford to lose.

Ethereum has been known for its reputation to fluctuate here and there, and without a sign, prices can drop within hours. With that said, there are chances your assets will drop in value over short periods, and therefore, don’t invest any funds you might eventually need for emergency cases.

By mentioning its volatility above and its fluctuations, Ethereum investments are worth looking into on a long-term basis. Despite its short term tendency to fluctuate in prices, Ethereum’s long-term performance has shown overall positive growth rates. So with that said, unless you’re someone who is looking into day trading, thinking long-term is another risk-averse option for investing into the cryptocurrency.

4. Keep an eye out on trends and signs

When looking to invest in any type of crypto asset, it’s important to keep a close eye on the market. One of the crucial aspects to investing in any asset form is being able to make predictions on its future performance or outcomes. Ethereum is currently at the forefront for the decentralized finance (DeFi) boom.

The total value locked in DeFi is $95.68B. This value increased by more than 7,000 per cent since January of 2020. Assuming this trend continues, it will greatly attract investors and individuals alike to invest in ETH. Certain signs such as this will help factor in toward your overall decision in placing your bets on Ethereum.

As with other cryptocurrencies, Ethereum 2.0 tax is based on capital gains. If you plan to resell your Ethereum for profit, or if you simply plan to spend it at a value that was higher than first bought at (in other words, the currency has appreciated), then you will be liable for capital gains tax.

The tax rate depends on how long you held the coin. Therefore, it’s essential to keep a record of all your transactions to avoid any legal issues further down the road.

There is always a level of risk before investing in any asset, and this follows along for Ethereum as well. It may be risky, but it has great potential to be rewarding. Many companies are on the come-up with their investments in Ethereum, using it as a building block to decentralize and trade among developers and innovators alike.

Start Investing In Ethereum With eToro 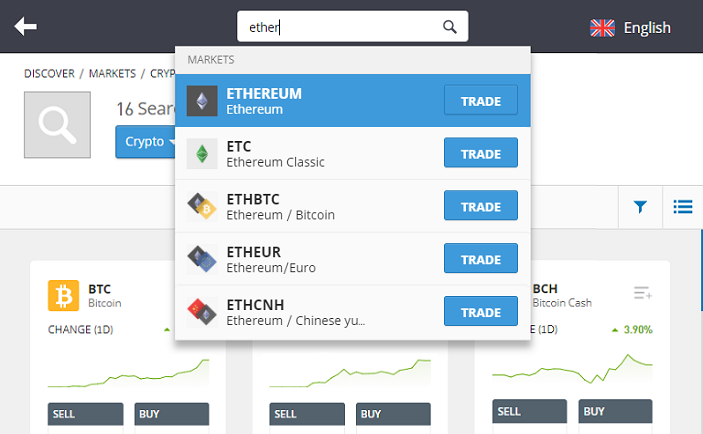 If you’re set on investing in Ethereum by now, eToro is a user-friendly and inexpensive platform providing sterling crypto trading experiences. The company continues to expand by introducing new products and other cryptocurrencies on top of Ethereum, allowing beginners and experts to explore various possibilities in the crypto world.

eToro – The Best Platform to Invest in Ethereum