Have you heard of ERC-20 tokens? Well, you should have! They’re everywhere and it’s all because of Ethereum.

They’re so common in fact, it is highly likely that they were a major factor in fuelling the altcoin boom that took place a few years ago.

In short, they make creating cryptocurrency super easy and are a major benefit to Ethereum as they are hosted on the Ethereum blockchain. But, of course, they’re not entirely perfect.

In this article, we’ll look at how Ethereum secretly dominates cryptocurrency development with ERC-20 tokens, and why that could mean big bucks for the Ethereum holders.

As you might know already, with Ethereum, it’s not all about being an alternative to Bitcoin. They have much bigger goals than taking down fiat money.

While Ethereum might not be as exciting to trade as Bitcoin with its humongous peaks and troughs, Ethereum may prove to be a better long-term investment.

Well, quite simply it has so much more to offer the world than Bitcoin does.

Many people associate Ethereum with smart contracts and dApps but forget about its ability to host other cryptocurrencies on its own blockchain.

Yes, that’s right. Ethereum is not the only cryptocurrency on the Ethereum blockchain, there are tonnes in fact. The majority of these other tokens are called ERC-20 tokens.

While no one was looking, Ethereum became a hub for creating different cryptocurrencies, which makes Ethereum a highly promising cryptocurrency to hold. 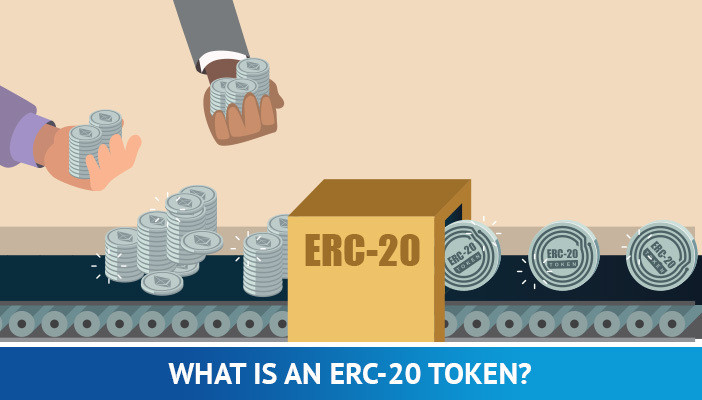 Ethereum is like the mother of cryptocurrency creation. With its creation of the ERC-20 token, Ethereum likely fuelled the rise in altcoins because they made cryptocurrency so easy to make.

ERC-20 tokens are a standard of developing cryptocurrency. They offer pretty much all a developer needs to set up a cryptocurrency and get started.

It is estimated that today there are approximately 200,000 different ERC-20 tokens in circulation.

Though, it should be mentioned that not all of these are technically considered cryptocurrencies. These tokens can be used for a wide range of services.

One of the key things that define ERC-20 tokens is that they don’t have their own blockchain; they all operate on top of the Ethereum blockchain.

This is great for developers who have ideas for a cryptocurrency but don’t have the resources to create their own blockchain for it.

It is a lot of work after all! You may even forget what you set out to achieve.

Plus, they are, of course, completely free to move away from the Ethereum blockchain at a later stage, which some have already accomplished (more on that in a bit!).

Even if Ethereum never takes the crown as the top cryptocurrency, it may bring the rise of another that does.

ERC-20 tokens benefit from all the advantages of Ethereum but have a certain amount of independence as long as they adhere to the rules of using the Ethereum blockchain.

Perhaps one of the biggest advantages to ERC-20 tokens that they make cryptocurrency creation easier, which encourages competition among different cryptocurrencies.

Theoretically, this will lead to more ingenuity and creative approaches to different problems. In the long run, more adaptable cryptocurrencies will outlive those not able to keep up.

On top of this, cryptocurrency developers can focus more on their ideas rather than how to create a coin (and blockchain) and basic maintenance-related issues.

Ready-made documentation for those who want to create their own tokens is also a huge plus and speeds up the development process as well.

And from a cryptocurrency trader’s perspective, ERC-20 tokens can be more appealing to trade because if they understand how Ethereum works, they will already process a good understanding of how ERC-20 tokens work as well.

This makes the research process easier and faster. Cryptocurrency traders don’t have to learn a whole new technology when they come across an ERC-20 token.

Another great bonus of trading ERC-20 tokens is that because they are hosted on the Ethereum blockchain, which is public, you can open them up and look at them.

With the right technical knowledge, you can work out exactly how they work and not get any sneaky surprises. Plus, if they are coded badly, you can just ignore them.

There’s no hiding on the Ethereum blockchain. ERC-20 tokens are super transparent.

ERC-20 tokens can also be sent and received by Ethereum addresses, which enables them to be accepted by a much wider user-base.

This overcomes a problem many altcoins have when they first start out; they have to create their own wallet for the cryptocurrency to be stored in or convince wallet providers to accept them.

And finally, a big advantage for Ethereum is that all these ERC-20 cryptocurrencies have to use Ethereum gas to make transactions.

Gas is a fee transactors need to pay for their transaction to be validated.

This is great for Ethereum because it means their cryptocurrency keeps moving, even when people aren’t trading or transacting Ethereum much.

Other cryptos on the same blockchain help keep it fluid which is excellent for trading volume. Plus, if an ERC-20 token is successful, that success will trickle down to Ethereum as well. 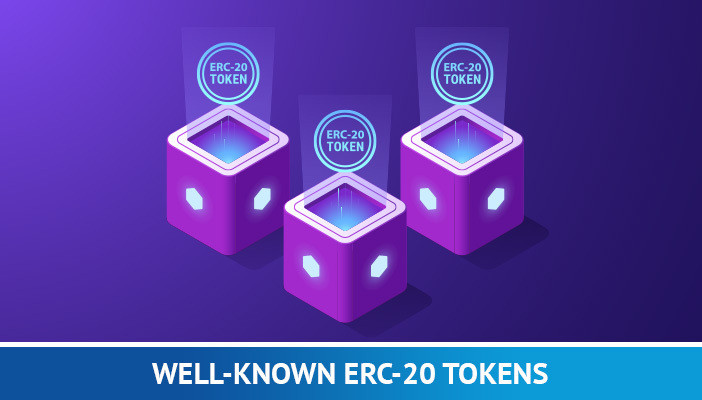 It may surprise you find out that some of the most well-known cryptocurrencies today are ERC-20 tokens or started out as ERC-20 tokens before leaving the Ethereum blockchain.

Perhaps the most well-known cryptocurrency to start out as an ERC-20 token is Tron.

More recently though Tron has managed to successfully migrate from Ethereum’s blockchain to its own blockchain, often referred to as ‘the mainnet’.

While this an amazing success story and shows that tokens can grow out of the Ethereum blockchain, Tron did have to get their community to make the move from Ethereum to the mainnet.

Interestingly, Tron’s developer’s claim that their move to the mainnet will make them 400 times faster than Ethereum! That’s a big claim and it will be a while before we see if that’s true or not.

Another rising star ERC-20 token in the cryptocurrency world is Chainlink, which aims to become the king of smart contracts through the use of oracles.

As Chainlink becomes more successful, it may end up leaving Ethereum as Tron did, but some might argue that it’s in the perfect spot to grow - the birthplace of smart contracts, Ethereum.

Binance Coin is another hugely successful ERC-20 token and is used on the Binance Exchange as a utility token. Users can receive a discount when using it for cryptocurrency trades.

Other ERC-20 tokens include:

But these tokens only just scratch the surface of what’s out there today.

How are ERC-20 tokens created?

Creating ERC-20 tokens is a relatively simple process. That said, it does require a good technical understanding of Ethereum and its programming language Solidity (so maybe not for everyone, yet!).

To create a new ERC-20 token, a user must start a smart contract on the Ethereum blockchain. This contract is then responsible for creating new tokens and handling transactions.

Additionally, it also acts as a ledger, keeping track of everyone’s balance as well.

Not everything about working on the Ethereum blockchain is hunky-dory. There are plenty of reasons why some cryptocurrencies might not want to be under Ethereum’s wing forever.

First and foremost, they might not like the changes Ethereum implements. When Ethereum updates the blockchain, those changes might not be in the best interest of every ERC-20 token.

On top of that, they may end up relying too heavily on Ethereum’s network and resources, which could be a problem if anything was to happen to Ethereum like a government shut down or a large-scale hack.

But perhaps more importantly, while ERC-20 tokens are seen as an industry standard, there have been issues with how they work, including many, many bugs.

One of the most frustrating bugs causes tokens to be accidentally destroyed when sent to a contract. Supposedly, up to $70,000 worth has been lost because of such issues.

Ethereum has released another token called ERC-223, which should solve this problem, but so far it hasn’t been as popular as ERC-20 tokens.

Another drawback to some users is having to use Ethereum as gas every time you want to make a transaction with an ERC-20 token.

Over time this can get expensive, especially if the price of Ethereum is on the rise, and for some traders, it is simply just an unnecessary step.

Ethereum is still stuck on proof of work

Perhaps though one of the biggest drawbacks for some cryptocurrency developers is that Ethereum still uses a proof of work algorithm, just like Bitcoin.

Proof of work has been out of fashion for a while now and many newer cryptocurrencies have been designed to use proof of stake instead, which many believe is fairer and more efficient.

That said, it is well-known that Ethereum is planning to move from proof of work to proof of stake, which will likely happen either in 2020 or 2021.

If they successfully make the change, this could be a big boost to not only Ethereum but also all other ERC-20 tokens. 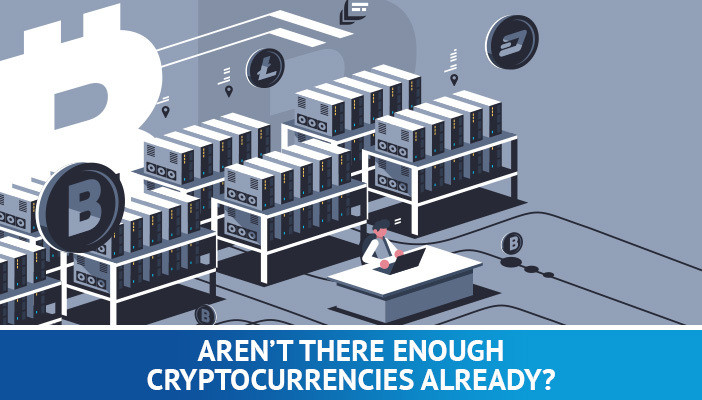 Others may question the point of making cryptocurrency creation so easy. After all, does everything need to be tokenised? Is every cryptocurrency worthy of creation?

Interestingly, many ERC-20 cryptocurrencies have lost up as much as 90% of their value and struggle to make a comeback. So, cryptocurrency traders should still be careful.

Such an overwhelming amount of choice of ERC-20 tokens may also be off-putting for some traders who might find it hard to distinguish between them.

Indeed, it is very true that many tokens are trying to accomplish similar things.

Now you know why Ethereum dominates Crypto with ERC-20 Tokens. If you're feeling inspired to start trading Ethereum, or this article has provided some extra insight to your existing trading knowledge, you may be pleased to know that etoro provides the ability to trade with Crypto assets and CFDs on up to 90+ cryptocurrencies.

If you enjoyed reading Ethereum Dominates Crypto With ERC-20 Tokens from Trading Education, please give it a like and share it with anyone else you think it may be of interest too.

Disclaimer:  Cryptocurrencies are highly volatile. Your capital is at risk