Tron is one of the fastest rising cryptocurrencies of 2019 and is attempting to achieve a lot.

Essentially they want to revolutionise how the Internet works while competing with Ethereum and EOS for dApps and smart contracts.

However, Tron’s ascension to 13th place on CoinMarketCap hasn’t been completely easy. There have been plenty of controversies along the way.

What is Tron trying to achieve? 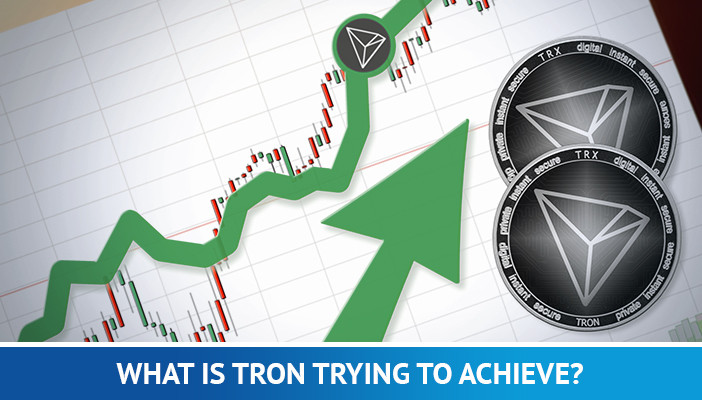 Tron is a very ambitious project.

Tron is essentially trying to become or create the web 3.0, which many believe should be a more decentralised web.

The team behind Tron are followers of Sir Tim Berners-Lee, the creator of the world wide web, which at this point would have been called web 1.0.

The original idea behind web 1.0 was to be a decentralised place, free from any governmental control.

However, this idealised world didn’t last long, and it largely suggested that after the dotcom-bubble which occurred between 1996 and 2000, web 2.0 was born.

Web 2.0 is the web we have today, and it has become very centralised as companies have far too much control.

Some even refer to the web we have today as a ‘tech oligarchy’, dominated by the likes of Facebook and Google.

Tron wants to use blockchain technology to give people back the ownership of their data which is often absorbed by big tech companies and used to make them profits.

The biggest way they propose to do this is by giving users proportional profits to the content they create online.

For example, someone who writes articles or makes videos on YouTube could receive money according to how much the content was shared, watched and reused.

This is important because currently large online companies profit from this through advertising, instead of the creators.

Competing with Ethereum and EOS for dApps

In the cryptocurrency world, Tron is largely in competition with Ethereum and EOS.

They want to be more scalable, more highly available and more cost-effective than other cryptocurrencies.

Tron also claims to supposedly process 2,000 transactions per second, which dwarfs most other cryptocurrencies.

However, many cryptocurrencies make such claims and until it is tested in live conditions, we will not know how fast it is.

How does Tron Work? 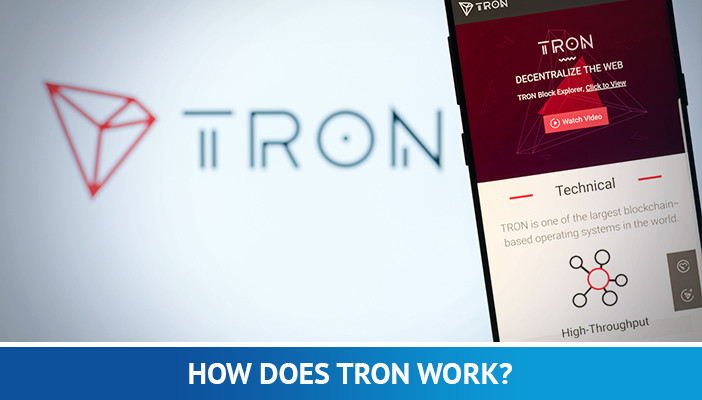 The most important thing to understand about Tron is how the elected super representatives work.

Elected super representatives are nodes that have the responsibility to create blocks, maintain the rules of the network, and drive the network forward.

Super representatives are elected on a rolling basis by those that work in the entire network.

Supposedly anyone can become a super representative if they have the base level of wealth, which is 9,999 tokens.

Every six hours, 27 new representatives are selected on a voted election.

To take part in an election, you need to freeze tokens, which means temporarily you will not be able to use them. This is done to prevent long-term power grabs.

Freezing tokens give you Tron power which gives you voting rights. Tron power is equal to the number of tokens you have frozen.

As users are incentivised to take part in how the network runs, this prevents them from doing bad things.

This acts as an incentive to get people to vote for you again.

Super representatives can also pass back their rewards to the people that voted for them to get voted again.

However, it should be questioned though if this will be abused or not.

Tron has main similarities with Ethereum, even using the same programming language Solidity.

Because of this, it is very easy for Ethereum developers to jump over to Tron if they choose to do so.

One of the primary differences with Ethereum is that while Ethereum tries to scale using sidechains, Tron is attempting to scale its main chain.

Perhaps one of the biggest pluses for the Tron network is that there are no gas fees which Ethereum requires to work.

Users will also be able to create TRON 20 tokens, tokens made upon the Tron blockchain.

Tron’s founder: Who is Justin Sun? 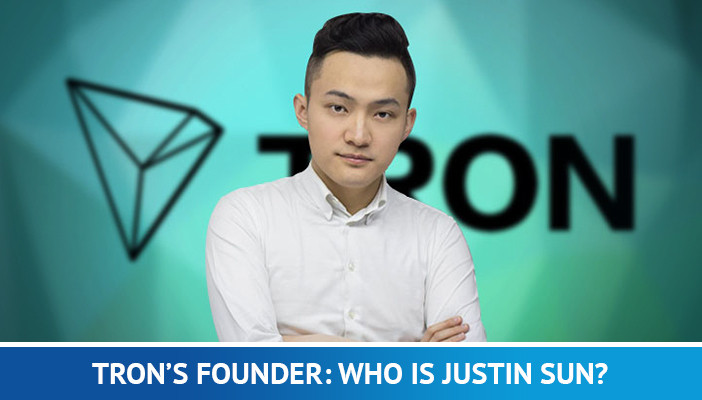 Justin (Yuchen) Sun is the founder of Tron. Born in 1990, he is very young and is from China.

Sun first got involved in the world of cryptocurrency by working with Ripple for two years as the chief representative and advisor in greater China.

Outside cryptocurrency, Sun is the founder of the PEIWO app which is similar to Snapchat and has 10 million users.

Justin Sun also acquired BitTorrent and is now the CEO.

He also graduated from Hupan University, which supposedly has a lower acceptance rate than Harvard, after being chosen by Jack Ma.

Jack Ma is the entrepreneur behind Alibaba, and it is believed that Tron and Alibaba have a close relationship. In fact, many people have joined the Tron team from Alibaba.

Sun is often referred to as Ma’s protege.

Before Hupan University, Sun studied an MA at East Asia Studies from the University of Pennsylvania and a BA in History from Peking University.

Sun also won the $4.6 million bid to have lunch with Warren Buffett. At the meeting, Sun wanted to change Buffet’s opinion on cryptocurrency. The proceeds will go to charity. 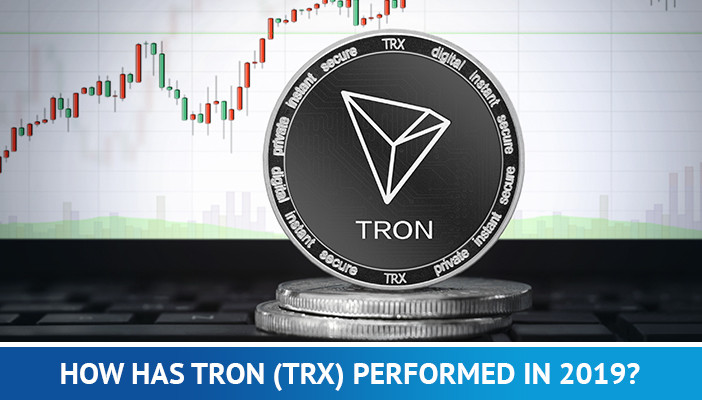 A lot of Tron’s success has been down to good marketing, particularly by Justin Sun. He is very likeable, and his young image is appealing to many.

Tron’s highest market capitalisation was approximately 16 billion in January 2018 and is available to trade in 60 different exchanges.

Some believe that Tron actually handles more transactions than its competitors Ethereum and EOS. If this is true, it may be that Tron is very undervalued.

In May 2018, Tron reached highs of approximately $5 billion, then twice it went down to approximately $1 billion and ranged from August 2018 to December 2018.

Then in January rose again up to approximately $2 billion.

Who knows? It is highly likely that the market has matured a lot since those early days, however, as Tron becomes more widely accepted, it may steadily rise once more.

Tron has also been praised for having good materials for developers to learn how to use it which will help with adoption, particularly if they want to bring people over from Ethereum and EOS.

In the future, Tron maybe soon available on PEIWO and there is also the possibility that it may be integrated with BitTorrent as well, which will help many people adopt the cryptocurrency.

Another development which will likely raise the price of Tron is when Tron starts using sidechains.

Most of the controversy that surrounds Tron is down to Justin Sun’s approach to marketing the cryptocurrency.

This is known to frustrate investors by claiming that big things will happen and then nothing happens, getting investors pumped and investing and there being no payoff or developments.

Some are not sure about Justin Sun’s relationship with Jack Ma. There is some speculation that Alibaba may acquire Tron.

If this happens this could have positive and negative consequences.

On the one hand, it could mean Alibaba using Tron for payments. On the other hand, it may mean Tron becomes more centralised.

Sun gained a lot of criticism when in 2019 he announced a partnership with Liverpool FC, which was then denied by the football club.

In reality, it was just an invitation they send to anyone influential in the world of tech.

There was also controversy following the resignation of former CTO Lucien Chen.

Chen left the company for a long list of reasons, one of the most important was that Tron was no longer the decentralised organisation it strived to be.

A spat then ensued between Chen and Sun which resulted in Chen stating that if Sun keeps making false claims about him, he will sue him.

There was even more controversy when Tron was supposed to give away a Tesla as a prize for a competition.

The winner had a lot of trouble trying to get their prize. Supposedly they didn’t respond to his messages for a month.

Eventually, they send him the prize in the form of TRX, but even then, the amount wasn’t enough to pay for a Tesla.

Even before all of this, there was an issue with the white paper, which was supposedly plagiarised.

Some are also sceptical of Tron’s relationship with Binance, which they claim are trying to pump it. Binance even airdropped Tron to their users.

Learn to trade Tron with our cryptocurrency course