Altcoin Trading: Everything You Must Know!

Altcoin Trading: Everything You Must Know!

Looking to trade cryptocurrencies that are not Bitcoin? Look no further.

In the mid-2010s, there was an explosion of altcoins flooding the market and many shot up in price. Many felt that maybe Bitcoin’s days were numbered.

Today though, the hype around altcoins has largely died down and prices fluctuate less.

Jesse Powell, the CEO of cryptocurrency exchange Kraken, believes that almost all altcoins are down 95% of their all-time highs.

This may be just a reflection of the industry in general as the cryptocurrency market is possibly more mature than it was.

Others speculate that there may be a cryptocurrency bubble that might burst at in the future.

In this article, we’ll look at what altcoins are and how you can make a profit by trading them.

What is an altcoin? 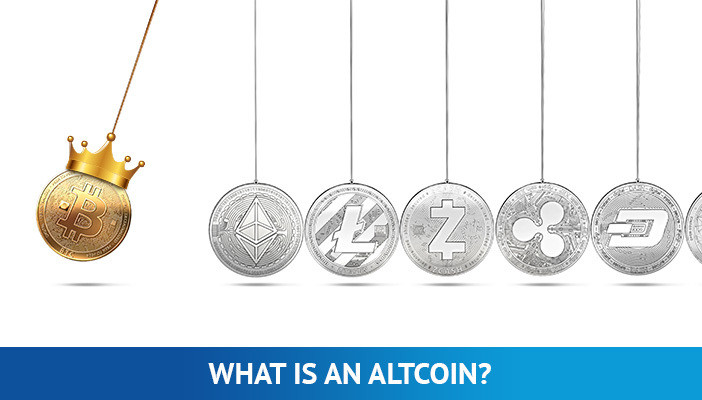 The term altcoin comes from combining the words ‘alternative’ and ‘Bitcoin’. Sometimes altcoins are simply referred to as ‘coins’.

At the time of writing, there are approximately 2,355 different cryptocurrencies. You can view them all on Etoro.

Bitcoin is not considered an altcoin because it dominates up to 66.3% of the cryptocurrency market according to CoinMarketCap.

So, with that in mind, basically all cryptocurrencies are altcoins, except one.

If an altcoin was to overtake Bitcoin though, it would be interesting to see if they are still referred to as an altcoin.

Ethereum and Ripple are the most successful altcoins.

The majority of altcoins will not survive, they will eventually fail and disappear.

While generally speaking, Bitcoin, Ethereum and Ripple have occupied the 1st, 2nd and 3rd largest coins by market cap respectively, from fourth place onwards the order of cryptocurrencies has changed dramatically.

A coin that was fourth place a year ago or even a month ago could be replaced at a moment’s notice.

Read More: Altcoins vs Tokens: What Is The Difference?

The primary goal behind many altcoins is the same as Bitcoin’s; to replace the current banking system that is in place and remove third parties from transactions.

People keep creating new cryptocurrencies because they believe that they can do better than Bitcoin.

Many altcoins are trying to solve Bitcoin’s and Ethereum’s problems such as scalability and speed.

They do this by experimenting with different approaches to coin creation, fulfilling transactions and security, etc.

In some senses, we are still in the development stage in cryptocurrency. No one knows which method will be king.

By trading altcoins, traders are essentially betting on certain methods as being better than others.

Some altcoins like Tezos are well aware of this and have been created in such a way to ensure they can be continuously updated.

Many altcoins have been created by hard forking Bitcoin.

A hard fork is essentially a split from another cryptocurrency which creates a new one. For example, Bitcoin Cash.

The first altcoin was Namecoin, which based on the same code as Bitcoin in 2011.

Much of how Namecoin works is the same as Bitcoin, both using a proof-of-work algorithm and are both limited to 21 million coins.

Many altcoins are ERC-20 tokens which are cryptocurrencies that have been built on top of the Ethereum blockchain.

Some altcoins that started as ERC-20 tokens have moved to their own blockchain. 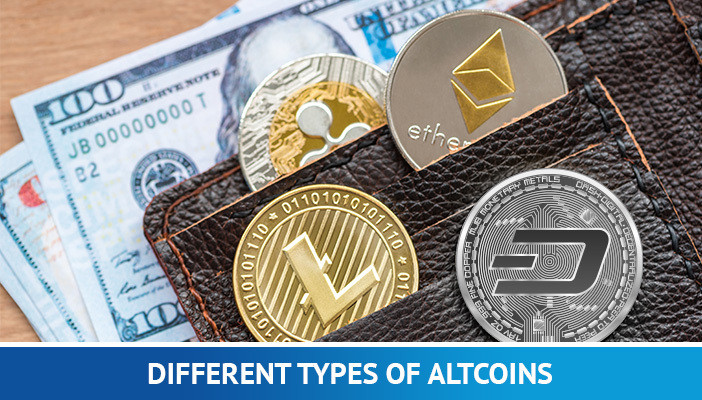 Many altcoins compete in similar areas. For example, Ethereum is competing with several different cryptocurrencies on smart contracts and dApps.

Ethereum’s most notable rivals include EOS, Cardano and Tron.

There are also a variety of other ‘privacy coins’. They are all competing over which coin offers the most privacy.

These include Monero, Dash and Zcash.

And then there are ‘stablecoins’, cryptocurrencies which are designed to be stably priced and as low risk as possible. These include TrueUSD, USD Coin and Pax.

Stablecoins are not particularly useful to traders to profit from. They are usually used by traders as a store of value.

For example, after trading another altcoin, you may transfer the value over to a stablecoin to protect what you have made when you stop trading.

Some altcoins are what are referred to as ‘utility tokens’ and can be used as a voucher.

Both coins give users a discount when they use them to make trades.

How can I get hold of altcoins?

Many exchanges do not allow you to purchase altcoins with fiat. Usually, you will have to do it through another cryptocurrency such as Bitcoin or Ethereum or a stablecoin such as Tether.

Trading altcoins can get difficult because they may require certain wallets to store them. Some altcoins are only available to be stored in the wallets created by their developers.

You may think that you can get around this by trading altcoins as CFDs via a broker, however, many brokers do not list little-known cryptocurrencies.

Even the best CFD brokers will likely not offer more than 10 different cryptocurrencies.

Why do people trade altcoins?

Trading altcoins is a great way to diversify your portfolio. When one coin is down you can trade another.

The problem with altcoins is that you cannot use them in many places. Most businesses that accept cryptocurrency will usually only accept Bitcoin.

Because of this, the main reason people are interested in cryptocurrency is to trade it.

What should I look for when trading altcoins? 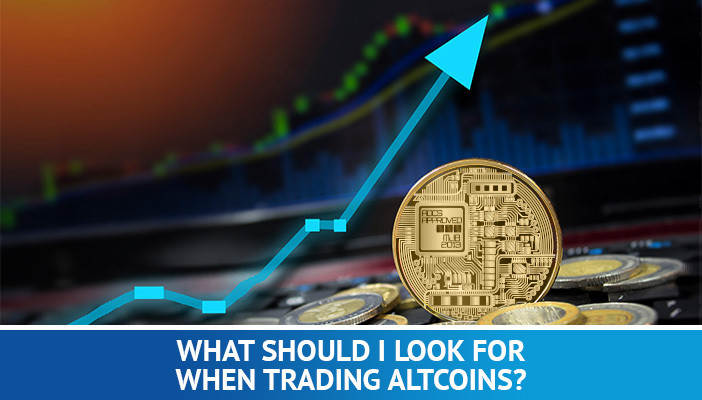 There is a great deal of things to look for when trading altcoins.

Liquidity is the key thing to look for when trading altcoins. You don’t want to trade an altcoin that doesn’t move much in price because it will be difficult to get at the prices you want.

If you do decide to get involved with an altcoin early on in its development, it will be harder to trade.

It may turn out to be more of an investment as you may have to wait until it is traded enough to sell it.

However, getting involved in a new altcoin at an early stage, though can be very profitable, is very risky.

You may decide to get involved in an altcoin during an ICO.

It is advised that if you do this, you should check out how well the ICO is performing. There are several sites online that rank ICO performance worth checking out.

Getting involved during the ICO stage is an excellent way to profit from altcoins. Typically, after an ICO, the price shoots up and traders sell to make a quick profit.

Usually, these traders will not know much about the altcoin or care about the vision, all they need to know is that the price will shoot up.

That said, it is still highly advised that you know a good deal about anything altcoin before taking part in an ICO.

Today, many ICOs are held in private and offered to only large institutional investors and we hear less about them than a few years ago.

That said, they still manage to move a large amount of money.

With many altcoins, the creators often hold a large amount of the circulating supply. This makes them vulnerable to insider trading and pump and dump schemes.

Look for cryptocurrencies that aspire to change the way the financial world of works, they should have a vision.

Be especially cautious of cryptocurrencies that only promise financial gains, these are more likely to be scams.

If you cannot find what makes a cryptocurrency unique, it is probably not worth trading.

Often, they will not include features such as smart contracts, they will usually repeat the same mantra of other successful cryptocurrencies without explaining just how they will achieve this.

Altcoins should also be decentralised and always confirm that they have a blockchain.

A good sign that an altcoin is worth trading is if it is open-source and people can examine how it functions.

If you remember anything from Altcoin Trading article, make these key points.

Learn to trade altcoin with our cryptocurrency trading course

If you enjoyed reading Altcoin Trading: Everything You Must Know! from Trading Education, please give it a like and share it with anyone else you think it may be of interest too.

Disclaimer: Virtual currencies are highly volatile. Your capital is at risk