Will Ethereum Outperform Bitcoin? — Is There A Chance?

In the past couple of months, Bitcoin and the wider demand for digital coins have exploded, with the price of BTC touching levels of over $40,000 in January. Even as Ethereum, the second-largest cryptocurrency by market cap, has continued to grow, adding well above 20 percent in recent weeks, the BTC price in the meantime has fallen behind from its new all-time high.

All eyes are now on the Ethereum price forecast for 2021 after a spectacular success in 2020. Let’s see where ETH is headed for this year, and where it stands against its number one competitor, Bitcoin.

Ethereum And Bitcoin Price Predictions For 2021

For Ethereum, the previous year was a wild ride. And it’s heading down the road to success as many analysts and crypto enthusiasts claim for the fate of ETH in 2021. Stage zero of a long-anticipated upgrade to a consensus system for Proof-of-Stake has now begun and so does the excitement for Ethereum.

ETH has seen a spike this year that even those of the most ambitious forecasts for ETH failed to predict last year. Now, Ethereum is trading on the 1-day chart outside of an accelerating triangle pattern while the over-leveraged market takes a rest. Ever since this, ETH rates have risen by 21 percent. 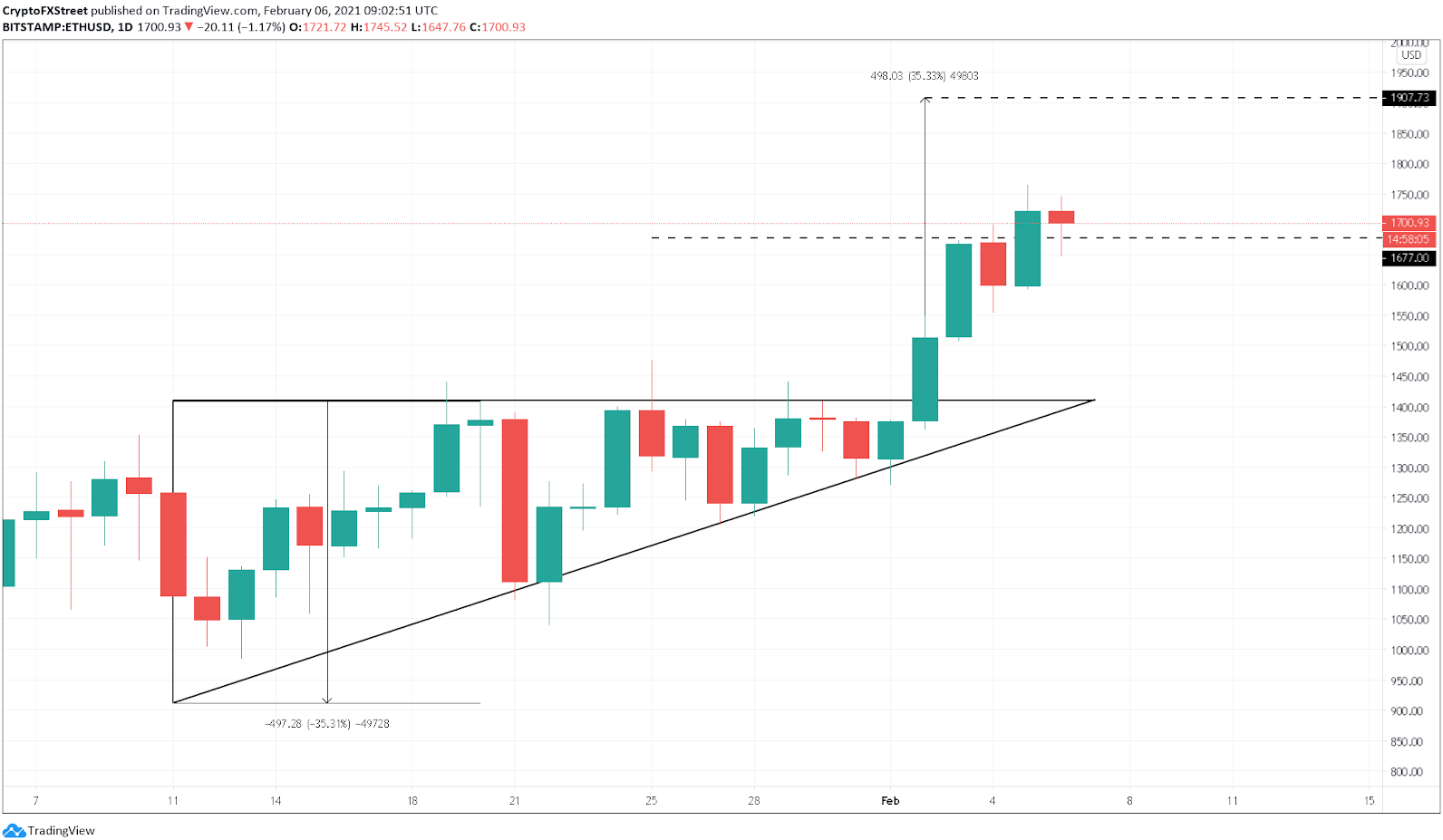 Some investors and analysts predict that ETH may reach $2000 by the end of 2021. Seeing that it recently surpassed its all-time high of $1,400, there are high hopes for it to go headfirst into a bull run this upcoming year.

BTC on the other hand is climbing high and starting the year off, maybe more than right. The biggest move on Bitcoin was this week’s announcement from Tesla, revealing a $1.5 billion dollar investment in the cryptocurrency.

Scott Minerd, a chief investment officer of Guggenheim Partners, the multi-billion dollar investment giant, has estimated that Bitcoin could rise up to $600,000 a coin, a price that may make the overall value of BTC about $12 trillion according to Forbes.

2020 was indeed officially one of the biggest years for Bitcoin since its invention. The price of Bitcoin has skyrocketed by up to a 300% increase during these past 12 months, surpassing the previous all-time high from 2017. As of recently, Bitcoin price hovers above the $40,000 mark and its latest bull run was sparked in October 2020 by PayPal’s announcement of adopting cryptocurrencies into their platform, including both Bitcoin and Ether.

A leaked Citi report in December from one of the bank's senior analysts suggests that Bitcoin has the potential to hit an all-time high of $318,000 by the end of 2021.

Bitcoin's non-stop growing popularity further boosts polarity between different groups of people, those that consider Bitcoin as a solid investment and those that are uncertain of its actual value.

Currently, the cryptocurrency community is divided over the multiple smaller cryptocurrencies that arise. The threat imposed by the government oversight and the regulations implemented has sparked the idea that less decentralized cryptocurrencies could potentially be negatively affected.

Ethereum is known to be very volatile in terms of its prices, there’s no doubt about that. For example, in January 2018, $10,000 spent will have burnt out to $830 within the year. Except, the same $10,000 you would’ve invested and kept back then, would now turn to $85,000 in January 2020. It’s safe to say without some sort of diversity in your portfolio, or in other words, something else to fall back on, Ethereum’s value has no basis in the real world.

Overall, following 2020, the world's second-largest cryptocurrency has gained more than 330 percent at $130. ETH also managed to hit $635 at its peak point-smashing in a serious way the all-important emotional landmark of $600.

However, this is all entirely what makes Ethereum so exciting. As more people start getting on board with crypto and get their hands on the token wagon, Ethereum may well be suited up to comfortably double to $2,500 in 2021.

When thinking short-term, ETH values often appear to change direction. Ethereum yields have doubled since 2015, nearly 60 percent of the time, when a productive month is preceded by a declining one and conversely, according to Yahoo Finance.

Keys Differences Between Ethereum And Bitcoin

Before we compare further in-depth Bitcoin and Ethereum, it is very crucial that we point out that the two cryptocurrencies are quite different.

Realistically speaking, Bitcoin can be used for everything. Although its nature differs from the way that usual currency like pounds or dollars settles in, it's not more complicated than them. It provides the options to be used in quite a lot of situations. Regardless, Bitcoin has become very mainstream among the markets allowing it to be used as a legitimate source of payment in various different areas.

Ethereum on the other hand is actually a computing platform which people use in order to form smart contracts through a scripting language. What that means, is that there is a blockchain in which numerous contracts can be written and executed automatically, if some specific criteria are met. For the majority of blockchains, it's very common that they are open-sourced and Ethereum is no different. What that means is that anyone with the proper knowledge can access and use Ethereum in order to write and implement smart contracts, which is nothing more than a validation of different criteria in a digital form.

Read Also: What is Ethereum? A Beginner’s Guide to Ethereum and Tips for Investing in ETH

Upsides That Put ETH In Its Favour For 2021

There are multiple reasons as to what gives ETH the upper hand in this case, and what exactly makes so many people confident about its overriding of BTC in the near future.

For instance, there’s the Enterprise Ethereum Alliance (EEA). EEA is the corporate scheme behind Ethereum working toward its global adoption. Their goal is to encourage organizations and businesses, in their daily operations, to embrace and use Ethereum technology. They support primarily to connect the ETH blockchain for corporate usage, with offices located in various parts of the world, such as the US, France, China, and Japan.

At this point, there are some really large names already part of the EEA, totalling to around 129 firms, including Microsoft, FedEx, JP Morgan Chase Bank, and Intel. Assuming the success continues and the list extends in the future, Ethereum can grab the upper hand in the adoption race against Bitcoin.

One of the biggest advantages of Ethereum in 2021 is the launch on Ethereum 2.0. ETH 2.0. It aims to make the platform more flexible, safe and sustainable. It will accomplish this by allowing over thousands of transactions per second, making it overall easier for apps to run more quickly and efficiently, and especially cheaper to use. The key feature is that it’s turning from a proof of work protocol to a proof of stake protocol to make Ethereum more sustainable.

Sustainable in the sense that it will consume far less computational resources for functioning and even less energy consumption.

The launch has already begun and is in the works. There are 3 primary upgrades in the implementation of ETH 2.0. The Beacon Chain, which is the first upgrade, went online on December 1st 2020. This essentially laid out the basis for potential future updates and acted as the launching of v.2.0. Next is the Shard Chains and the Docking. Shard Chains is expected to begin in 2021 and allows for the processing of transactions and storing of data. The Docking signifies incorporating the current ETH network with that of ETH 2.0’s, finally transitioning to a proof-of-stake algorithm.

On top of this, one of the biggest attractions to crypto investors today are DeFi platforms. DeFi’s usage, cases and price adjustments remain outstanding for 2021. Majority of the crypto leaders in DeFi including Akropolis, Looprin, and Solana, who all run on the Ethereum platform. In other words, fast growth and popularity among DeFi in the future contributes to dramatic growth for Ethereum. Via their grant scheme, the Ethereum foundation has provided financial support for Uniswap and Compound.

Would you Consider Investing In Ethereum?

A metric called the Flippening Index is used by the Blockchain Hub. This index looks at eight various Bitcoin and Ethereum network comparative metrics. Here are the eight indicators: 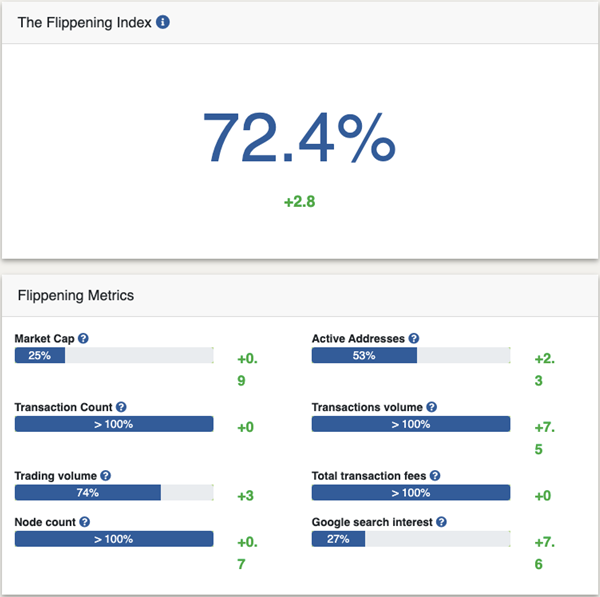 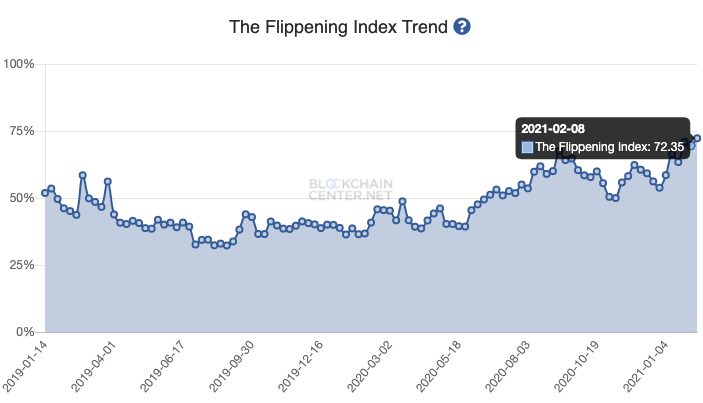 When all the metrics reach 100% for Ethereum, the flippening has happened, according to the index. This is when Ethereum officially flips Bitcoin. It’s currently at 72.4%, up from 66.5% last month. This rapid increase is causing tension among all crypto lovers.

Majority of people refer to active addresses and transaction volume. It’s good to keep in mind that individuals can have more than one active account for every wallet they own, therefore the metric won’t always be 1:1, which in the end also pushes up transaction volume as more addresses are generated.

So, Will Ethereum Surpass Bitcoin After All?

Bitcoin has a majority market dominance and a market value of well above $850 billion if you look at the cryptocurrency market in early 2021. With close to $200 billion, Ethereum follows behind in second place. Bitcoin maximalists expect BTC to cross a $1 trillion market cap. Currently, it can be clarified on the basis of developments and the ability of the Ethereum ecosystem to bring more money in liquidity and resources.

Ether is capable of executing the same function as Bitcoin, though connected to the Ethereum network. Whether or not Ether does so is merely a consideration that defines whether or not Ether has some importance to them for the parties to the deal.

Ether is literally an Ethereum utility. In addition to just simply performing as a digital coin, Ethereum is a massive computer network that allows everyone to create a decentralized program. An organization could hire a programmer to create this on the ETH platform if it determined that it wanted a blockchain built solution.

With the continuing creep in the regulatory legislation and the ongoing tag of financial fraud influencing user practices, Bitcoin itself is the greatest challenge to Bitcoin. Ether has the benefit of being synonymous with the Ethereum platform and foundation, and Ethereum accomplishes what Bitcoin doesn’t and came about solely because of Bitcoin’s shortcomings. With that said, we’ll sit patient and see what lies ahead.