Interested in investing and trading Ripple? In this guide, we will show you XRP’s entire price history and how it changed throughout the years, from 2012 to 2021.

Back in 2009, a mysterious, unknown individual recognized only by the name of Satoshi Nakamoto, launched the first-ever functional cryptocurrency, naming it Bitcoin. With this single move, Nakamoto tossed a pebble that started making waves that now promise to transform the entire world’s way of life forever.

However, back in those early days, and years that followed, Bitcoin started inspiring people who saw its potential, but also its flaws. Three engineers - one of many small development groups focused on crypto at the time - wanted to create a better version of Bitcoin that would improve upon its limitations. These were David Schwartz, Jed McCaleb, and Arthur Britto. The trio started developing a new project that eventually grew to become the XRP Ledger (XRPL).

The project saw launch the following year, and it survived the next decade as one of the biggest and most popular cryptocurrencies in the industry, despite a number of controversial aspects that followed it throughout its history.

2012 was an interesting year in the crypto industry. Bitcoin was already quite well-known, and its price reached $13.45 by the end of the year. Meanwhile, the altcoin market has started to grow, and that includes XRP as well, which went live in June 2012.

Its price was initially set at $0.1, but it remained fairly low for several years to come, even dropping to $0.005 in the meantime.

Shortly after the coin’s launch, however, it started getting the attention of the still young crypto industry, to the point where it quickly got listed on the few existing crypto marketplaces. Meanwhile, the project was joined by Chris Larsen, and the group started the company originally named NewCoin in September 2012, which then got renamed into OpenCoin, and eventually into Ripple.

In 2013, Ripple was working heavily on developing its open payments network that would transfer its cryptocurrency, the XRP. The network came out in Beta at some point, already pursuing the project’s dream of allowing people to break free of the financial networks such as credit cards, banks, PayPal and other institutions that charged high fees.

The project also made it clear back in those early days that its goal is to complement Bitcoin, rather than be its rival, believing that its fate is to open up more gateways for Bitcoin users to reach BTC.

At the time, the coin’s price was still at $0.0056, but by the end of the year, XRP price briefly hit the value of 5 cents for the first time in its history.

In 2014, Ripple Labs started seeing some major milestones. It managed to enter some major partnerships, including 3 banks and 1 network, and there were as many as 16 IRBA-certified Ripple gateways around the world.

It is likely that the price crash was not Ripple’s or XRP’s fault, however, as this was also the year of the infamous Mt. Gox crypto exchange hack.

We mentioned earlier that the project started as NewCoin, then rebranding into OpenCoin. Well, OpenCoin finally ceased to be, and Ripple Labs was born in 2015. This was also the year when the company held a Series A funding round that allowed it to raise $28 million, and it got a $4m strategic investment by Santander. At the time, Ripple teamed up with as many as 25 banks in 15 different countries, with 10 of the world top 50 banks being among those who adopted its payment network.

Unfortunately, this did not reflect on the coin’s price, which continued to drop throughout the year, going from $0.024 on January 1st, 2015, to the low point of $0.0040 on December 1st, 2015. The coin recovered slightly in this last month, but it eventually closed the year only slightly higher, at $0.0060.

Check Out: 23 Reasons Why You Should Invest in Ripple XRP Today

While 2015 has been a very bad year for the XPR price, 2016 brought greater stability at a larger scale. However, micro-volatility was still there, and it became quite active, with the coin fluctuating between $0.0056 and $0.0085. The fluctuations got smaller during the summer of 2016, when they went from $0.0056 to $0.0070. In September of that year, however, the price started surging once more. 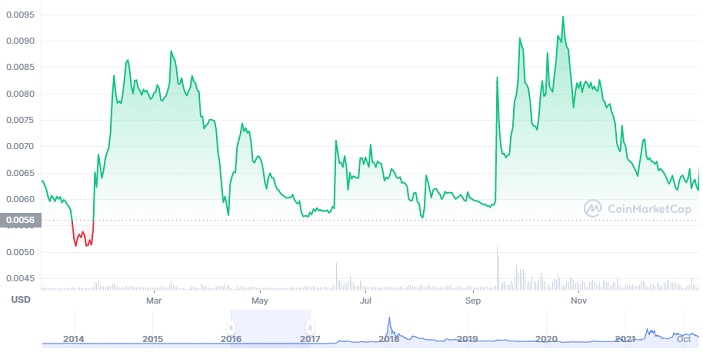 As for some of the highlights, it is worth mentioning that Ripple had around 30 active integrations - only 5 more than at the end of the year before, but these 5 banks that now joined the RippleNet were also among the top 50 banks in the world.

2017: The Year When Everything Changed

Finally, we come to 2017. This was the biggest year in crypto history until 2021. Back then, the XRP price did see some very minor fluctuations in the first 5 months, but compared to what came next, these were rather dismissable.

As most likely know, 2017 was the year when Bitcoin reached $20,000 per coin, pulling the entire industry into a rally that was never seen before, and taking the crypto sector out of the dark and into the light of day. Ripple’s XRP was a bit late to follow, joining in around May 2017, going from $0.005 to $0.04. After spending the next 7 months maintaining this price, the coin skyrocketed in December, ending the year with the price of $2.3 on December 31st, 2017.

While Bitcoin and a number of other cryptos reached their ATHs in late 2017, XRP was actually a part of the group that did so in the early days of January 2018. Specifically, the coin hit an ATH of $3.37 on January 7th, and immediately after that, it started the crash that took it right back to $0.5. This support was also broken later in the year, with XRP finding its bottom at $0.28. 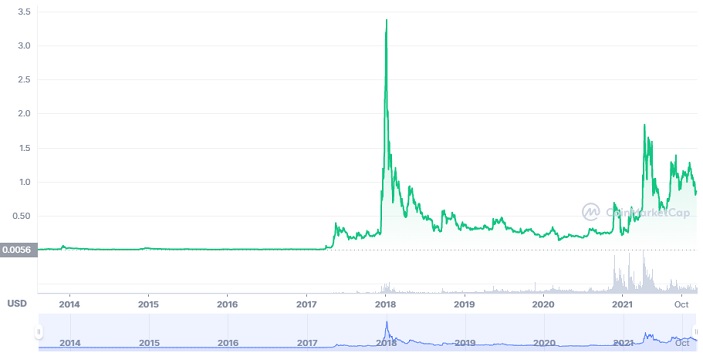 As for its technology, Ripple and its representatives felt rather confident that XRP will soon be adopted by the banks. Their partnership count kept surging, and the coin and its technology were at their highest, partnering with the likes of Cuallix and MoneyGram, MercuryFX, and even getting listed on platforms like SBI Holdings’ exchange, SBI Virtual Currencies.

Read Also: Will Ripple Make Me Rich in 10 Years?

For most cryptocurrencies, 2019 was the year of recovery from the crypto winter that was dominating the industry throughout the previous year. Ripple itself quietly kept working on new partnerships, but the voices that were accusing it of being a security kept getting louder, and the project even had some lawsuits to deal with.

In terms of price, it saw relative stability near $0.30 for the first five months of the year, followed by a surge to $0.45, and then a drop to $0.20 in December 2019. However, this was only the beginning, as in only a few months’ time, Ripple dropped to levels that it didn’t see since early 2017.

2020 will likely be remembered as the worst year in a long time. It was the year when the COVID-19 pandemic forced the entire world into social distancing, self-isolation, and quarantines. The traditional markets saw a major meltdown, and even the crypto industry followed in a price crash before making a miraculous recovery.

XRP price went from $0.32 all the way down to $0.12, which was a level not seen since 2017, prior to the price rally that took XRP to a 2-year-high. The coin’s price spent the next few monts recovering, and even skyrocketing to $0.70 around the same time when Bitcoin hit $29k. However, it all ended abruptly for Ripple after the SEC lawsuit that dominated the following year.

Check Out: The 5 Best Ways To Buy Ripple (XRP)

In an unpredictable twist, Ripple and its officials all got sued by the US SEC in late 2020, and were forced to defend themselves throughout 2021. The legal battle started when the Securities and Exchange Commission accused XRP of being an unregistered security, which Ripple continues to deny to this day. 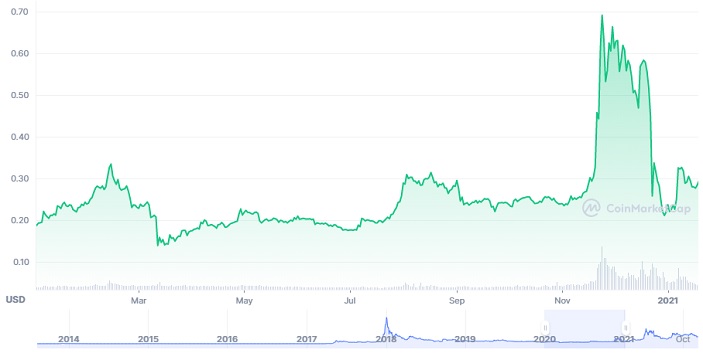 Despite the coin’s price drop in late 2020, Ripple did not stay down for long. As it openly defied the SEC, while also finding acceptance in the east, from European and Asian markets, the coin’s price managed to join others in following the trends of 2021, and even reach $1.8 in mid-April. Since then, it saw corrections and recoveries that once again brought it back to $0.84, which is where it sits at the time of writing.

Despite its technological progression and rise in popularity, Ripple’s XRP had its price mostly stable, other than the few major events that affected the entire crypto sector. The project saw controversy multiple times in its lifetime, and its biggest battle is still being fought. However, if Ripple comes out of it as a victor, many expect a massive price surge to follow, which might be worth keeping an eye on.

The history of Ripple and its token XRP is long and deep, but if there are a few key points to remember, then we suggest these:

Studying the crypto price history is one of the crucial indicators of what the price will do next, as it reveals its historical advancement, its behaviour during major crypto events, and more. Also, do not forget that cryptocurrencies like XRP can be highly volatile, although XRP itself tends to be more stable than others, but it is far from being as stable as traditional currencies or even stablecoins.

Pros and Cons of Investing in Ripple

Should You Buy Ripple?