Bitcoin Price Analysis: BTC Continues To Drop, Could Drop Below $47,000

The Bitcoin price started the previous week on a fairly positive note, rising by 0.55% on Monday. BTC continued to push on Tuesday, moving above the 200-day SMA and settling at $48,875 after registering an increase of over 4%. With the 20-day SMA acting as resistance at this level, BTC registered a drop of 0.85% on Wednesday. The price was back on the green on Thursday, as it moved past the 20-day SMA and settled at $50,831 after rising by nearly 5%. The price managed to remain in the green on Friday, registering a marginal increase. 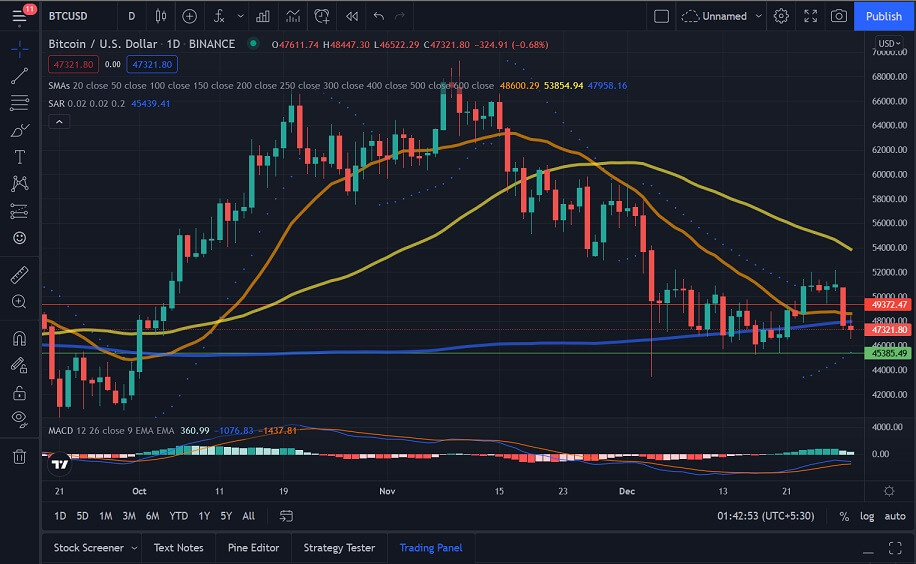 After Friday’s marginal increase, the Bitcoin price fell back on Saturday, falling by 0.69% and dropping to $50.539. Sunday saw BTC back in the green, rising by 0.63% and then rising by 0.30% on Monday to settle at $51,009. BTC fell back significantly on Tuesday, falling by nearly 7%, slipping below the 20 and 200-day SMAs and settling at $47,646. The price continued during the ongoing session, as sellers looked to push the price further down.

We can see that the Parabolic SAR is currently bullish, indicating that BTC could recover.

Looking at IntoTheBlock’s IOMAP for the Bitcoin price, we can see that BTC faces strong resistance at around $49,315. At this price level, over 1.9 million addresses have sold more than 1.3 million BTC.

We can see that the MACD is currently bearish, indicating that the price could drop further 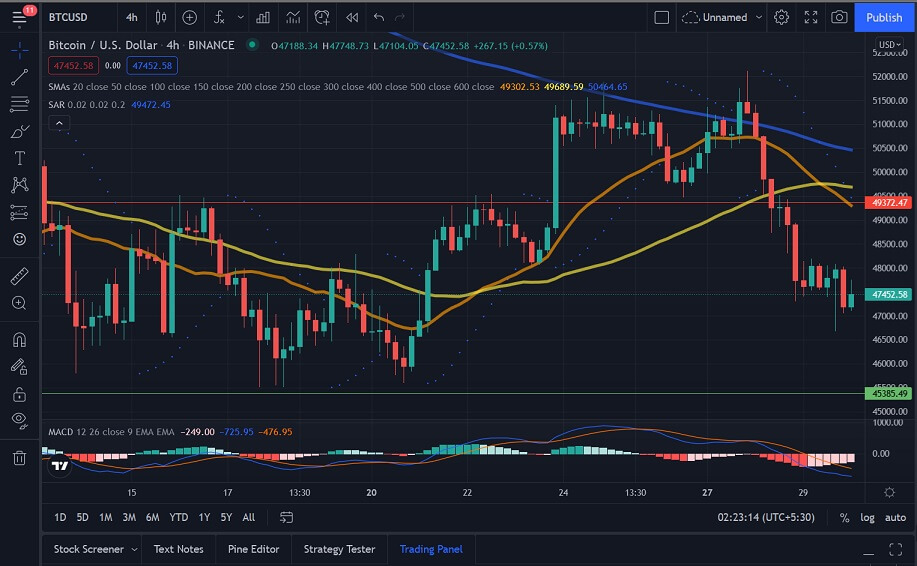 Bitcoin’s market dominance has continued to fall, bottoming out below 40% this week. That is very close to the all-time low of 36.7% in January 2018, according to data from TradingView.

Bitcoin market dominance refers to the ratio between BTC’s market capitalization and the total crypto market cap. This is not the first time its dominance has dipped in 2021. Back in May, BTC had dipped to represent just 40.3% of the combined crypto capitalization, according to CoinMarketCap, and it neared the same level again in September.

Bitcoin critic and Europac chairman Peter Schiff tweeted about the event recently, saying it indicates that BTC is “losing its first-mover competitive advantage.”

"With over 16,000 alternative cryptos to choose from Bitcoin's market dominance is now below 40% for the first time since June of 2018. With an unlimited supply of easily created cryptos with virtually identical properties, #Bitcoin is losing its first-mover competitive advantage."

Research published by TradingPlatforms recently stated that the data may signal an incoming “alt season.” Over the last seven years, altcoin market dominance has increased threefold from 21% in 2014 to around the 60% mark this month.

In a tweet, Crypto analyst Altcoin Sherpa claimed that the “alt season” has already been underway for an entire year. They referenced a chart tracking BTC’s market dominance, suggesting that the downward trend might continue.

Abu Dhabi, the capital of the United Arab Emirates, is stepping up its efforts to attract crypto-focused businesses as it seeks to become the leading cryptocurrency center in the Middle East.

In an interview with Blockworks, the Chairman of the Abu Dhabi Department of Economic Development, Shorafa Al Hammadi, said the government of Abu Dhabi had set itself a deadline of the end of this year to “ease passporting between digital cryptocurrency exchanges to ‘normal’ instruments.”

The emirate is already among the global leaders in developing a crypto-friendly regulatory environment, having established an initial framework in 2018, according to the CEO of Abu Dhabi’s Financial Services Regulatory Authority, Emmanuel Givanakis. He said:

“At that time, the industry was already talking about needing to come under a regulatory umbrella, and we came out with what we think is a fairly comprehensive framework.”

Abu Dhabi’s neighbor and fellow emirate, Dubai, is also keen to attract digital-assets firms and last week revealed that it enlisted Binance to help it develop an “international virtual asset ecosystem.” Binance announced recently that it has also received approval for a license-in-principle in Bahrain.

Two regulated digital asset exchanges — Matrix Exchange and Midchains — are already operating in Abu Dhabi, and a third, DEX, is due to commence operations soon, according to Al Hammadi.

Marathon Digital Holdings, a Nasdaq-listed Bitcoin mining company based in Las Vegas, has ordered new machines worth $879.06 million. The order includes 78,000 units of Bitmain's Antminer S-19 XP mining machines to be delivered through 2022.

The dispatch is divided into six batches, with 13,000 units to be delivered each month from July to December 2022. Marathon will pay Bitmain in batches as well. The firm said:

This is the largest single order Bitmain has ever received for S19 XPs, in terms of total hash rate (140 terahashes per second or TH/s), according to Marathon CEO Fred Thiel. The deal will help Marathon expand its operations to approximately 199,000 total machines and its hash rate to 23.3 exahashes per second (EH/s) by early 2023, Thiel said last week.

Looking at the Bitcoin price chart, we can see that BTC has been extremely bearish over the past couple of sessions. However, BTC has pushed up marginally during the current session and could push back to its opening level of $47,611.