Bitcoin Price Analysis: BTC Continues To Drop, Could Slip Below $47,000

The Bitcoin price was quite bearish during the previous weekend, dropping by 0.73% on Saturday. The price made a marginal recovery on Sunday, rising to $50,816. Monday saw BTC back in the red, registering a marginal drop, before falling by over 6% on Tuesday, slipping below the 20 and 200-day SMAs and settling at $47,646. Wednesday saw BTC continue to drop, falling by 0.77% and settling at $47,280. 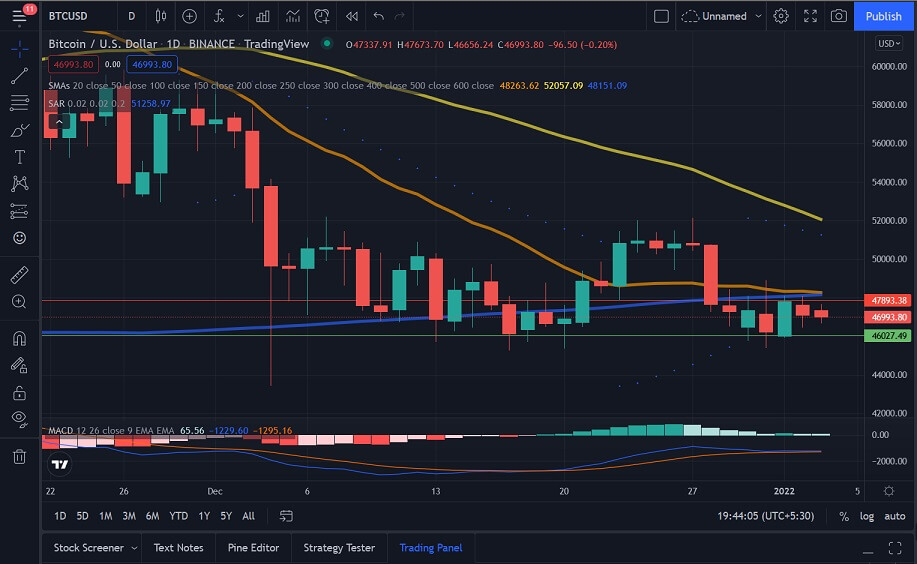 Looking at IntoTheBlock’s IOMAP for the Bitcoin price, we can see that BTC faces strong resistance at around $47,879. At this price level, over 2.7 million addresses have sold more than 1.1 million BTC. 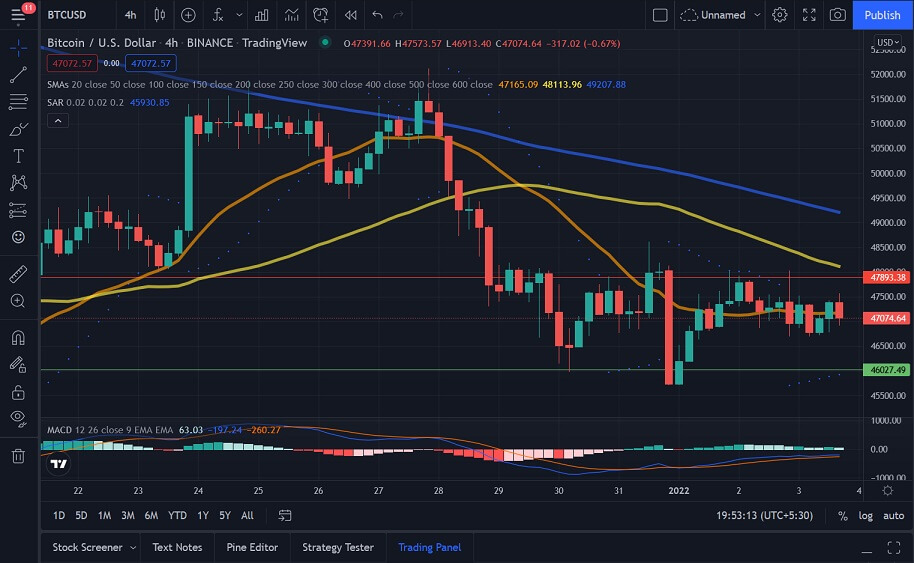 Wharton School finance professor Jeremy Siegel recently said that Bitcoin has replaced gold as an inflation hedge for young investors. In a recent interview, Siegel noted that gold's performance was “disappointing” in 2021.

On the other hand, BTC has been increasingly emerging as an inflation hedge among younger investors, Siegel argued.

“Let’s face the fact, I think Bitcoin as an inflation hedge in the minds of many of the younger investors has replaced gold. Digital coins are the new gold for the Millennials. I think that the story of gold is a fact that the young generation is regarding Bitcoin as the substitute.”

Siegel also reminded that older generations witnessed how gold had soared during the inflation of the 1970s. “This time, it is not in favor,” he added.

Gold, which traditionally emerged as an asset class providing a hedge against inflation, failed to meet investors’ expectations in 2021, recording its worst year since 2015 and dropping around 5% to close the year at $1,800. Despite massive price fluctuations in 2021, BTC had surged by 70% by the end of 2021.

Starwood Capital Group co-founder Barry Sternlicht also said that gold was actually “worthless” and he is holding BTC because every government was printing massive amounts of money.

With Bitcoin gaining more than 60% in value in 2021, many in the cryptocurrency space are hopeful about the future of the flagship digital asset in 2022. Speaking with CNBC, cryptocurrency lender Nexo founder, Antoni Trenchev, revealed that there are two reasons why he believes Bitcoin will more than double its present levels by the middle of the year.

“Every time investors in the broader community write off Bitcoin, it outperforms significantly. This has been the case in 2020 when it rallied close to a 1000%, and on top of that, it rallied another 63% [in 2021]. I’m quite bullish on Bitcoin. I think it’s going to reach 100k this year, probably by the middle of it.”

There are two reasons, according to Trenchev, for his bullish forecast that Bitcoin will hit $100,000 in the middle of 2022, the founder noted:

“We see institutional adoptions persevere quietly companies building out their treasuries filling it with Bitcoin. And also, the broader theme of macroeconomic realities and cheap money, in my opinion, is here to stay, which is great for crypto, which is an inflation hedge and gold 2.0.”

The notion that cheap money is here to stay may be called into question by what the Federal Reserve is doing right now with interest rate hikes. Trenchev believes that once we see a rate rise, the stocks and the bond market suffers.

He explained that there hadn’t been much of a political wheel to sustain any power through any correction in the traditional financial markets in the last few years. Therefore, the Nexo founder considers the vast majority of people are wrong about the rate hikes by the Fed.

A Las-Vegas based asset manager with decades of experience and a Japanese-based gaming behemoth are considering a multibillion-dollar casino in New York’s renowned Manhattan skyline that would include room for cryptocurrency trading.

In addition to the world’s largest cryptocurrency trading floor, they want to build an esports stadium and a facility for events like New York Fashion Week, the US Open, and Fleet Week in their project.

In an interview back in December, former Las Vegas Sands board member Jason Ader, said:

“The goal is to have a differentiated, but comprehensive, approach to entertainment that goes beyond casino gaming with some pretty cool elements.”

The name “Mirai,” which was selected for the casino, is derived from the Japanese word for “future.” According to current estimates, the project will cost at least $3 billion. However, the exact figure may vary depending on where it is built, which has not yet been determined.

UE Resorts International is a subsidiary of Japan-based gaming technology supplier Universal Entertainment Corporation. It is working with Jason Ader and other partners.

While UE Resorts and Ader prefer that the casino be situated in Manhattan, city officials have already expressed opposition to the concept of a casino built in the borough. Long Island and nearby counties are also being evaluated as potential locations.

26 Capital Acquisition Corp, Ader’s blank-check business, will combine with a casino resort in the Philippines that Universal controls.

Looking at the Bitcoin price chart, we can see that BTC has registered a marginal drop during the ongoing session. If sellers retain control of the market, BTC could slip below $47,000. However, if the price does recover, we could see BTC move to $47,500 and test the resistance at $47,900.