The Bitcoin price continued to drop on Monday, as sellers retained control of the session, pushing the price below its support level and $58,000. BTC had slipped below the 50-day SMA on Thursday when it dropped to $56,952. However, the price recovered on Friday and rose to $48,139. Saturday saw BTC continue to push up as it rose to $59,914. However, with the 50-day SMA acting as resistance at this level, the price dropped on Sunday, ending the weekend at $59,798.

The Bitcoin price started the previous weekend positively, as the price pushed up marginally on Saturday. BTC continued to push up on Sunday, as it rose to $65,909, after rising by 1.75% and ending the weekend on a positive note. However, the price fell back in the red on Monday, as BTC dropped by over 3% and settled at $63,736. Tuesday saw the bearish sentiment continue, as the price dropped below the 20-day SMA and settled at $60,275 after registering a fall of over 5%. Despite the bearish sentiment, BTC was able to stop the slide on Wednesday, as the price managed to post a marginal increase. 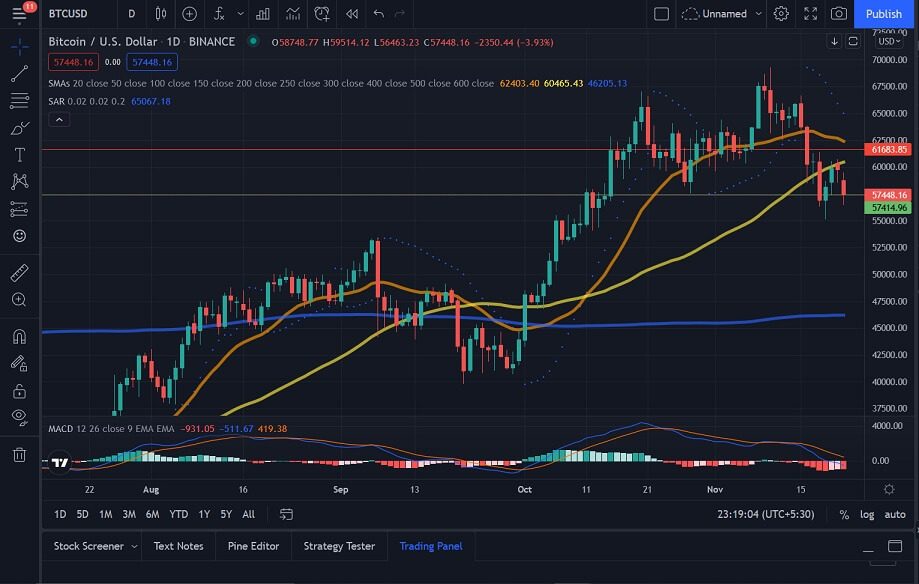 Looking at the 4-hour Bitcoin price chart, we can see that BTC had dropped below the 200-bar SMA, with the price falling to $61,048. The price continued to drop from this level, dropping to $59,006 before making a marginal recovery. The price fell back in the red and dropped to $55,906 before making a strong recovery and pushing up to $59,660, as it made its way back above the 20-bar SMA. With the 20-bar SMA now acting as support, BTC could stay at this level for the next few sessions before dropping below the 20-bar SMA and settling at $57,467. We can see that BTC is still in the red during the current session, as sellers look to push the price to $57,000.

We can see that the Parabolic SAR has flipped to bearish, indicating that the price could drop during the current session. 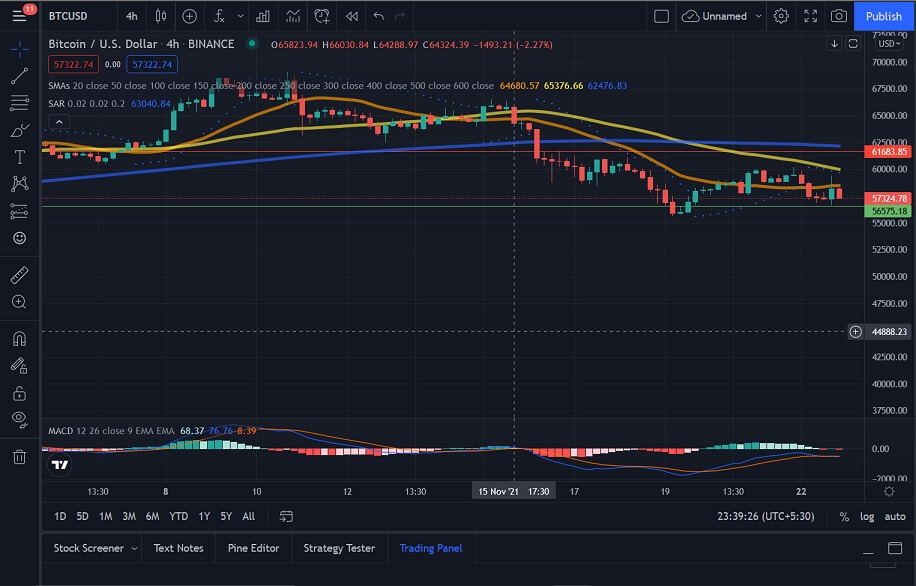 El Salvador plans to build a Bitcoin city at the base of a volcano, with the cryptocurrency used to fund the project, its president has announced. The city will be circular to represent the shape of a large coin and will be built in the south-eastern region of La Unión, President Nayib Bukele said.

The site would take advantage of the Colchagua volcano's geothermal energy to power Bitcoin mining. El Salvador recently became the first country to use Bitcoin as legal tender. The move led to large-scale protests over fears the cryptocurrency would bring instability and inflation to the impoverished Latin American country.

Addressing a raucous crowd at a promotional Bitcoin event in the coastal town of Mizata late on Saturday, Bukele said the planned new city would "include everything."

The president said the nation would not levy any income taxes in the city, only value-added tax (VAT). He added that half of the revenue gained from this would be used "to build up the city," while the rest will help keep the streets "neat and clean."

Mining Bitcoin and other cryptocurrencies are done using sophisticated computers to solve complex mathematical problems. It is costly and takes up large amounts of energy. Bukele did not provide dates for construction or completion of the city but said he estimated that much of the public infrastructure would cost around 300,000 Bitcoins.

Republican Senator for Wyoming Cynthia Lummis recently fired back at Hillary Clinton for deriding cryptocurrencies. She suggested that Bitcoin offers a hard money solution to the US dollar’s inflation problems. Lummis’s comments follow the cautionary words of former Secretary of State Hillary Clinton earlier this week.

In a panel discussion at the Bloomberg New Economy Forum in Singapore, Clinton suggested that cryptocurrencies could “destabilize nations.” Lummis responded to her with the opposite perspective. In a tweet, she said that Bitcoin could help “stabilize” an otherwise unstable US dollar.

“Great leaders do not fear the future. America could win the future by embracing Bitcoin as hard money that can be used to stabilize USD and undo the tailspin begun in 1971.”

In 1971, US President Nixon entirely abolished the gold standard, putting the US money supply under the Federal Government’s control. Since then, inflation has been a far more prevalent problem, and savings rates across the Western world have massively declined. Bitcoin is often seen as a solution to this problem due to its fixed and non-manipulable monetary policy.

Looking at the Bitcoin price chart, we can see that sellers are firmly in control of the current session, with the price already down by over 4%. If the current sentiment persists, we could see the price drop to $57,000.