Bitcoin Price Analysis: BTC Could Drop Below $50,000 After Weekend Fall

The Bitcoin price fell back during the current session, as sellers pushed BTC below $50,000. BTC is currently at $47,970. BTC had pushed up significantly leading to the weekend, rising by nearly 5% on Thursday and settling at $50,831. The price continued to increase on Friday, registering a marginal increase. Saturday saw BTC continue to drop, as the price fell by 0.69% before falling below $50,000 during the current session. 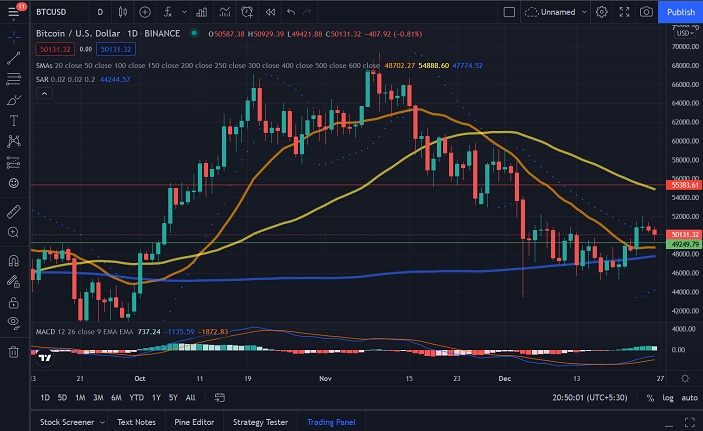 After dropping to $48,457 on Wednesday, the Bitcoin price pushed up significantly on Thursday, rising by nearly 5% on Thursday and settling at $50,832. On Friday, BTC remained in the green, registering a marginal increase, before dropping back in the red over the weekend. BTC dropped by 0.69% on Saturday, falling to $50,539, and is in the red during the ongoing session as well, with sellers in control.

We can see that the Parabolic SAR and MACD are bullish, indicating that the price could recover.

Looking at IntoTheBlock’s IOMAP for the Bitcoin price, we can see that BTC has strong support at around $49,274. At this price level, over 1.8 million addresses have sold more than 1 million BTC.

We can see that the MACD and the Parabolic SAR are both bearish, but if the price recovers, we could see them flip to bullish. 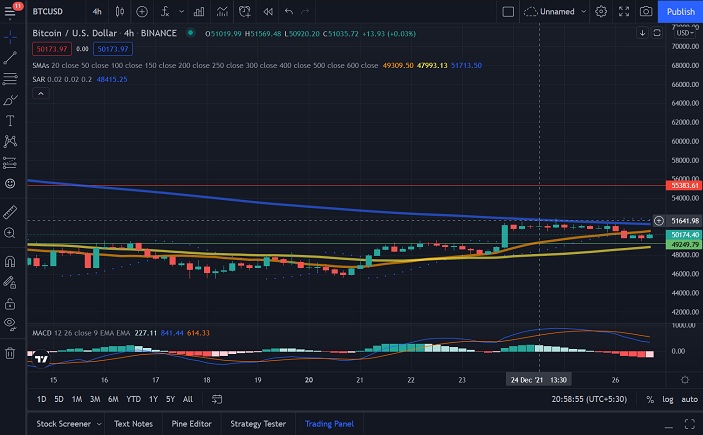 Sen. Lummis Is Proposing A New US Crypto Market Overseer In 2022

Next year, US Senator Cynthia Lummis plans to propose a new regulatory entity focused on crypto, according to Bloomberg. Per the report, the yet-to-be-filed legislation includes a mandate for "a new organization under the joint jurisdiction of the Commodity Futures Trading Commission and the Securities and Exchange Commission to oversee the digital asset market."

Other aspects would focus on stablecoin regulation and consumer protection. However, explicit details will be clear once the bill is released.

Lummis, who owns bitcoin, has emerged as one of the highest-profile advocates in Congress. She has also become a significant beneficiary of industry political donations, as reported by The Block.

Whether the bill will succeed during this session of Congress will depend on the political dynamics of a national election year. That said, crypto as a public policy area achieved unprecedented prominence amid this summer's bipartisan infrastructure bill fight. Lummis was one of the major figures in Congress during that period.

This past fall, Coinbase proposed the creation of a digital assets-centric regulatory body for the US market. The proposal included establishing a brand new regulator with control over marketplaces for digital assets, which the firm has dubbed "MDAs."

"Ensuring consistent regulation and application of the laws requires a single regulator. Where new policy questions or challenges arise, the ability of a single dedicated regulatory body to respond in an efficient and timely manner benefits everyone."

Turkish regulators have fined local cryptocurrency exchange Binance after allegedly showing non-compliance with digital currency laws related to customer information. The exchange that operates under BN Teknoloji was fined 8 million Turkish lira ($750,000) by Turkey’s Financial Crimes Investigation Board (MASAK), which is the agency’s first punitive measure since it began overseeing the crypto sector.

The exchange allegedly violated various regulations that emerged during the liability inspections. Notably, Binance is accused of failing to provide customer information related to money laundering in line with new laws enacted earlier in the year.

In April, regulators notified exchanges operating in Turkey that they will be required to share user information mainly linked to tax regulation of digital currencies. According to the ministry of finance, the MASAK would use the information for various aspects such as tracking and preventing crime.

The fine emerges as cryptocurrencies continue to grow in popularity among Turkish residents and the government has taken several measures to regulate the sector, resulting in a new crypto law draft. President Recep Tayyip Erdoğan is reported to have confirmed the draft law will now move to the country’s parliament, according to local media outlet NTV.

Notably, residents view cryptocurrencies as a haven due to the declining value of the Turkish lira even as President Erdoğan moves to implement a new economic model.

El Salvador is on its way to seeing a massive change in its economy due to the adoption of Bitcoin, according to President Nayib Bukele. He recently reiterated his confidence in the direction he is leading his country in.

El Salvador, under his leadership, adopted Bitcoin as legal tender in September after months of planning and a majority vote in the country’s parliament. In a tweet, he stated that while the world had tagged El Salvador’s move as “The Bitcoin Experiment,” he expects that the country will prove that mass adoption can change a country’s economy.

He also added that when the rest of the world caught on to how Bitcoin had transformed El Salvador, it would be “game over for fiat.” Bukele noted that his country would go down in history as “the spark that ignites the real revolution.”

His take seems to be a response to the multiple criticisms the country has been getting for its adoption of Bitcoin as legal tender. Its most recent criticism came from the Bank of England Governor Andrew Bailey, who said he was concerned about the implications of El Salvador’s adoption of Bitcoin.

The governor said that Bitcoin could become worthless and was volatile. Hence it posed a threat to the stability of the country’s economy. However, under Bukele’s leadership, El Salvador continues to push its adoption of Bitcoin massively. The country has been buying Bitcoin and now holds over 1,140 Bitcoins.

Looking at the Bitcoin price chart, we can see that BTC has dropped significantly over the weekend. If the current sentiment persists, we could see BTC drop below $50,000. However, if the price recovers, BTC could move to $51,000.