The Bitcoin price fell significantly over the weekend, as prices crashed. BTC had registered a drop of 1.04% on Thursday, as it fell to $56,634. The price continued to drop on Friday, falling by over 5% and settling at $53,752. The price continued to drop over the weekend, as the selloff continued, dropping by over 7% and slipping below $50,000 to $49,683 on Saturday. The current session sees BTC still in the red, with sellers looking to push the price to $49,000. 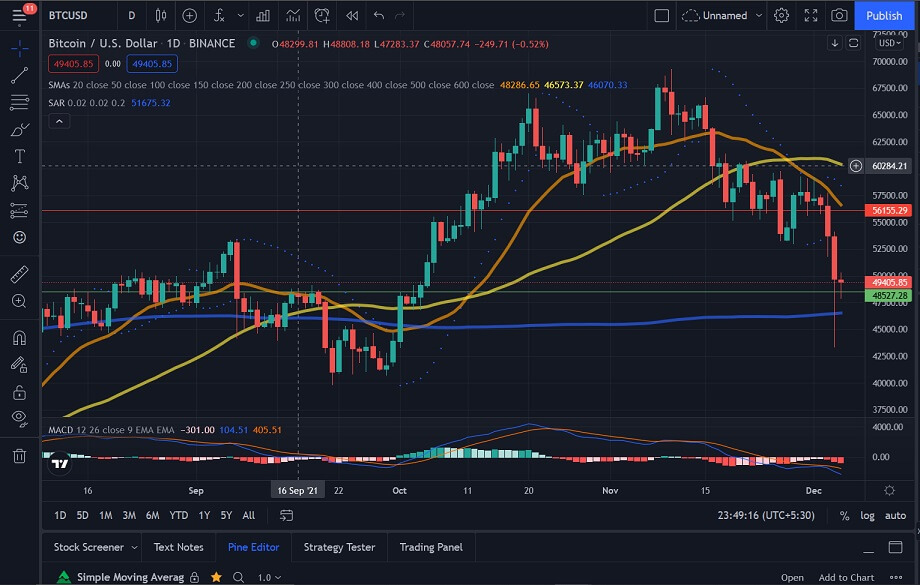 After making a marginal recovery on Wednesday, the Bitcoin price fell back on Thursday, dropping by 1.04%. BTC fell further on Friday as the bearish sentiment grew, with the price dropping by over 5% and settling at $53,572. Saturday saw the most significant fall of the weekend, as BTC dropped by 7.57%, slipping below $50,000 and settling at $49,683. The current session sees BTC dropping towards $49,000, as sellers retain control of the session.

The 4-hour Bitcoin price chart shows us that BTC had pushed above the 20 and 50-bar SMAs on the 29th, rising to $57,415. With the 50-bar SMA acting as support, BTC maintained this level for the next few sessions before dropping marginally and slipping below the 20-bar SMA on the 2nd. BTC then registered a sharp drop on the 3rd, as the price slipped below the 50-bar SMA and dropped to $46,965. The price rose marginally from this level, pushing up to $49,848, before dropping to its current level of $49,325.

We can see that the MACD is currently bearish, indicating that the price could continue to drop. However, if the price manages to recover, we could see it flip to bullish. 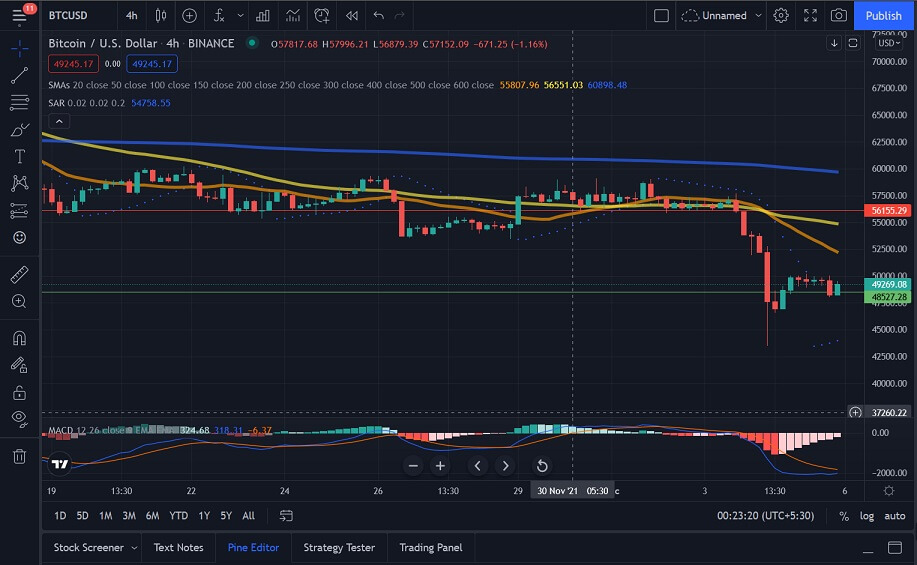 El Salvador continues to stack Bitcoin as the price of the virtual currency falls below $47,000 for the first time since October. Nayib Bukele, El Salvador’s president, announced that they purchased 150 BTC at an average USD price of $48,670. The country now has over 1,000 BTC.

Notably, Bitcoin crashed below $47,000 to $42,200 a few minutes after El Salvador’s decision to acquire more BTC. El Salvador seems to be buying BTC every time the virtual currency falls considerably. Nayib Bukele explained that they are “buying the dip.”

Moreover, El Salvador has also been involved with different Bitcoin investments. The country released the so-called “Bitcoin Bond” to get the necessary funds to build a massive Bitcoin mining facility to protect the BTC network using volcano energy.

Bitcoin seems to have been highly correlated with stocks and traditional markets over the last few months. This correlation could already be seen when BTC fell in March 2020 with the expansion of the Coronavirus crisis. Based on cryptocurrency data platform Coingecko, the market capitalization of the 11,392 coins it tracks dropped nearly 15% to $2.34 trillion. That value had briefly crossed $3 trillion last month when bitcoin hit a record $69,000.

The plunge follows a volatile week for financial markets. Global equities and benchmark US bond yields tumbled on Friday after data showed US job growth slowed in November, and the Omicron variant of the coronavirus kept investors on edge.

The price of Bitcoin dipped over the weekend, shedding more than $9,000 in value. The sudden downward correction has also resulted in more than $1.05 billion in Bitcoin futures liquidations in the market.

Across the entire crypto market, a staggering $300 billion was wiped off in 24 hours, with around 83% of this figure representing long position liquidations, according to data from Coinglass. Despite this, many market participants remain bullish and expect a positive price turnover soon. Pseudonymous creator of the Bitcoin stock-to-flow (S2F) valuation model, PlanB, is one of them.

PlanB maintains that Bitcoin is looking strong for several reasons. First, the Dutch analyst notes that the relative strength index (RSI) of Bitcoin, which is a technical indicator that measures the magnitude of price changes to evaluate overbought or oversold conditions in the market, was at 68. This is indicative that the Bitcoin market still had much room for growth before it would hit the overbought region.

PlanB also referenced the market trend of 2017 to support his bullish narrative. He pointed out that despite prices correcting downwards more than four times during the 2017 bull market with dips that ranged between 29 to 38%, the market still reached an all-time high of over $20,000 from trading at less than $1,000 at the start of the year. 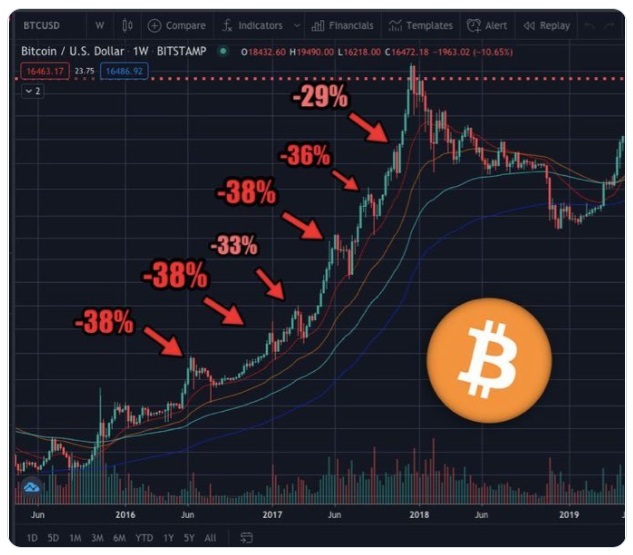 This implies that he expects prices to turn around and maybe even reach his projected target of $100k.

Alex Mashinsky, CEO of cryptocurrency lending platform Celsius Network, has maintained that Bitcoin might hit a new high of around $140,000 before April 15th, 2022.

Speaking to Kitco News, Mashinsky noted that the price might go as high as $160,000, sparking a selling environment as investors aim to cash in. However, the executive projected that the selling pressure would trigger a drop around the second quarter of next year, leading to a correction that might end up at $80,000.

His sentiment came as Bitcoin plunged below the $50,000 mark as the entire market continued to experience volatility. At the same time, the drop comes just days after the asset underwent the Taproot upgrade.

Notably, the market expected Bitcoin to surge in value following the network upgrade, which introduced several improvements to the protocol, including enhanced user privacy. However, Mashinsky believes that Bitcoin’s surge in value is not dependent on technological upgrades.

Looking at the Bitcoin price chart, we can see that BTC has registered a huge drop over the weekend, slipping below $50,000. If the current sentiment prevails, BTC is likely to drop to $49,000, and perhaps we could see a recovery thanks to the support at $48,500.