The Bitcoin price had pushed up significantly on Saturday (20th) when it pushed up by over 3%. However, the 50-day SMA came into play at this level as resistance, and the price dropped on Sunday, registering a marginal drop. BTC continued to drop on Monday, falling by almost 6% and settling at $56,335, before pushing up on Tuesday and moving to $57,678. BTC registered a marginal drop on Wednesday before pushing up on Thursday, rising by 2.50% and settling at $58,813. 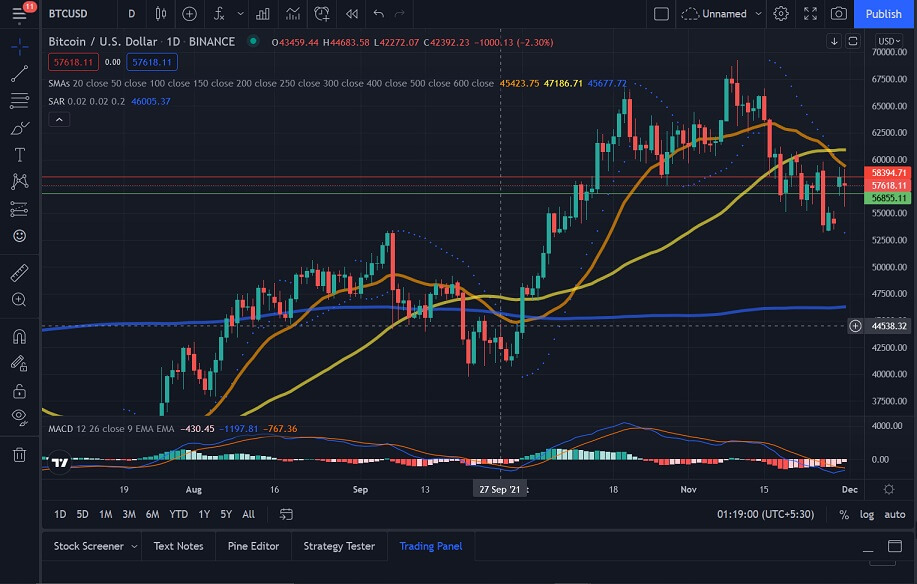 We can see that the Parabolic SAR is just flipped to bullish, indicating that we could see the price push up.

The MACD is currently bullish, indicating that we could see the price push up during the ongoing session. 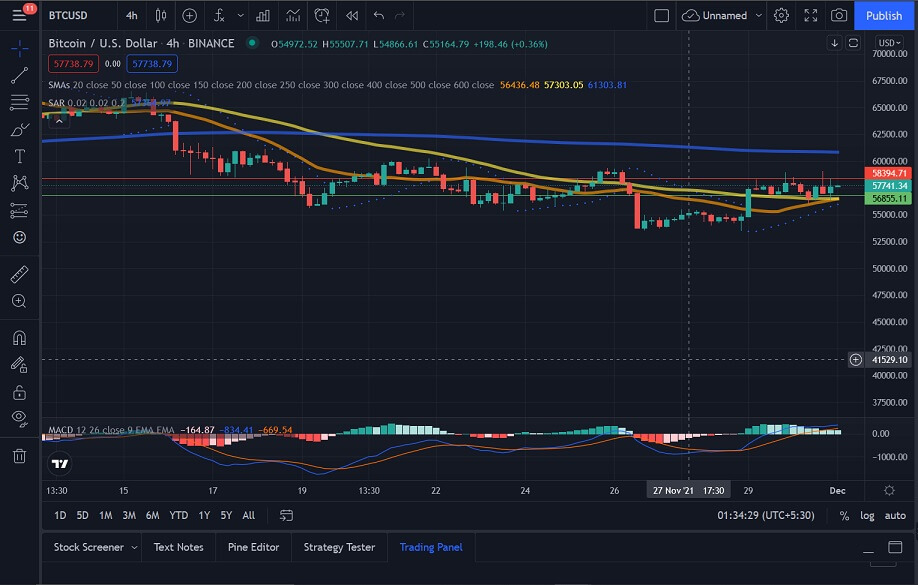 What’s Next For Jack Dorsey?

Twitter CEO Jack Dorsey has been a well-known Bitcoin advocate and enthusiast. As expected, when he announced his decision to step down as Twitter CEO, crypto-enthusiasts were excited. Many, including Binance's Changpeng Zhao, seem to be wondering if Dorsey plans to work in the crypto space.

Dorsey is still the CEO of Square Inc., the financial services and digital payments company. Essentially, this means that Dorsey has chosen to focus on the payments arm over his social media platform.

Notably, Twitter CFO Ned Segal has not pushed Dorsey’s crypto-endorsement for the platform. According to WSJ, Segal had previously commented that cryptocurrencies investment “doesn’t make sense right now.” In the context of the asset’s volatility, the CFO also said that the company prefers to hold less volatile investments as it would have to change its policy otherwise.

On the contrary, Square is reportedly the third-largest public holder of Bitcoin. It holds around 0.5% of its cap in BTC, which comes to around .038% of the total supply of the asset. Analyst and crypto-influencer CryptosRUs believes that Dorsey might even follow Michael Saylor’s footsteps with Square. Especially since MicroStrategy holds around 95% of its market cap in Bitcoin.

The creator of India’s crypto bill Subhash Garg recently clarified confusion around the bill. The parliamentary discussions around a controversial crypto bill sparked fears around the ban on cryptocurrencies, with no clear indication about the ban’s scope.

Per earlier reports, an episode of panic selling among Indian investors followed the announcement. In an interview with local news channel News 18, Garg clarified:

“[The description of the crypto bill] was perhaps a mistake. It is misleading to say that private cryptocurrencies will be banned and to intimate the government about the same.”

Garg believes that the Indian government should formulate a bill after discussing it with stakeholders and crypto investors. Furthermore, the bill suggests banning private cryptocurrencies without clarifying what the word “private” stands for.

Hence, the crypto community in India self-interpreted two different versions of the bill’s agenda. One considered banning all non-government-issued cryptocurrencies. The other excluded assets running on public blockchains like Bitcoin and Ethereum.

Garg also pointed out a flaw in classifying cryptocurrencies as assets after underscoring the vast ecosystem powered by disruptive technology. He also said that crypto exchanges have limited interests and do not represent the entire community:

Garg added that the central bank digital currency initiatives, especially in India, are complex. According to him, the government first needs to address challenges, including the unavailability of smartphones and digital wallet issuance.

Looking at the Bitcoin price chart, we can see that BTC has registered a drop during the ongoing session. If sellers are able to push the price down, we could see BTC drop to $57,000. However, if the price manages to recover, we could see it move back above $58,000.