Bitcoin Price Analysis: BTC Jittery As It Pushes Above $42,500 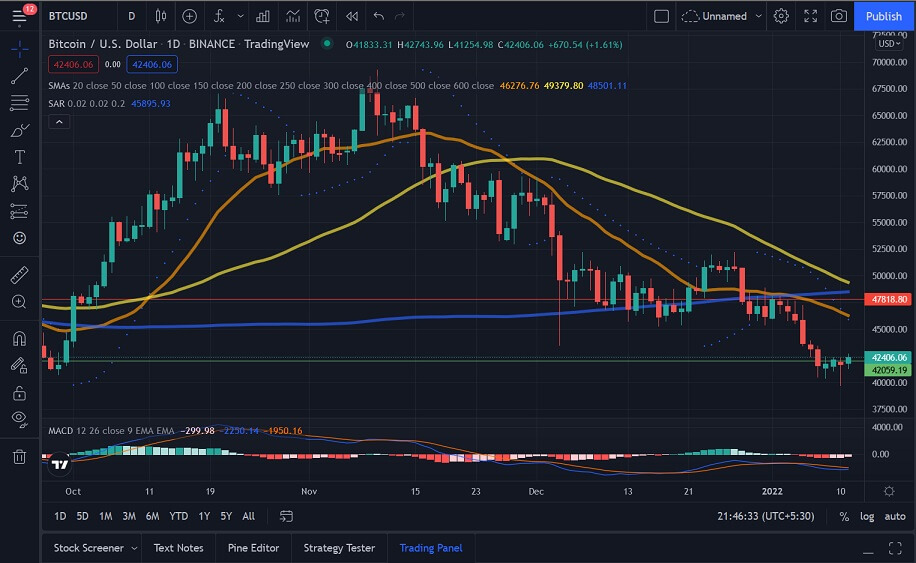 We can see that the MACD and Parabolic SAR are both bearish, but if the price continues to push higher, we could see them flip to bullish.

Looking at IntoTheBlock’s IOMAP for the Bitcoin price, we can see that BTC faces strong resistance at around $47,851. At this price level, over 1.8 million addresses have sold more than 790,000 BTC.

We can see that the Parabolic SAR has flipped to bullish, indicating that the price could recover. 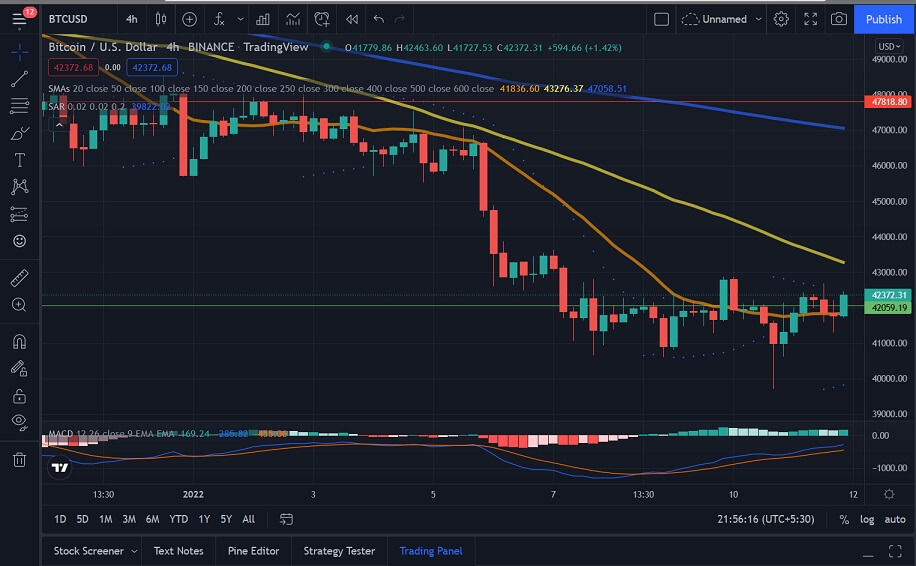 Popular investor Bill Miller recently revealed he has invested 50% of his entire portfolio in Bitcoin and businesses related to the top digital asset in a recent interview with WealthTrack. He found the perfect buy-in opportunity during Bitcoin’s dip to $30,000 last year.

Even though he held a minor amount previously, his recent BTC shopping spree was the result of the token’s sustained price growth and intriguing fundamentals, according to Miller. He added:

“Bitcoin has gone up an average of 170% a year for the past 11 years… There are a lot more people using it now, a lot more money going into it from the venture capital world, there are a lot of skeptics that are trying it out now.”

He also rebukeD Warren Buffett’s comments on Bitcoin’s lack of an intrinsic value, stating that it is based on its supply and demand dynamics, much like paintings and other collectibles. He said:

“Bitcoin is the only economic entity where the supply isn’t affected by the demand.”

On the contrary, the investor explained that Gold’s supply would increase with its demand as an incentive to its miners to increase production. Moreover, Bitcoin is also inaccessible to government authorities and ensures secure private ownership, argued the investor. According to him, combining these factors makes the asset much like an “insurance policy.”

Miller also revealed his other investments related to Bitcoin include the mining company StrongHold Digital and business intelligence firm MicroStrategy, whose CEO Michael Saylor is also a believer in buying Bitcoin dips.

Joe Rogan: I Have A Lot Of Hope For Bitcoin

Popular podcast host Joe Rogan recently said he has “a lot of hope” for cryptocurrencies, but mostly Bitcoin, though he said he doesn’t understand it very well.

“The difference between Bitcoin and Ethereum is that in Bitcoin there will only be 21 million, it cannot be changed. It cannot be inflated, and you cannot say the same for Ethereum.”

Curry highlighted how he is a sole believer in Bitcoin and dismisses most of the other cryptocurrencies because BTC is the only project with limited and unchangeable supply. According to him, that is a central and dividing aspect in his assessment of cryptocurrencies.

“I’m just on the Bitcoin train because I believe my money is safer there. The money system is broken, it causes inflation, misery, it causes wars because it’s linked to oil, so we have to protect all that.”

Looking at the Bitcoin price chart, we can see that BTC has made a strong recovery during the current session. If the current sentiment persists, we could see BTC push to $42,500 and above.