The Bitcoin price has pushed up significantly during the current session, with buyers pushing the price above $48,000. BTC was quite bullish over the weekend as well, with the price rising by 2.41% on Saturday and settling at $47,243. However, the price fell back on Sunday, thanks to the 200-day SMA, and dropped to $46,657. Monday saw BTC post a marginal recovery, rising by 0.55%, before pushing above $48,000 during the current session. 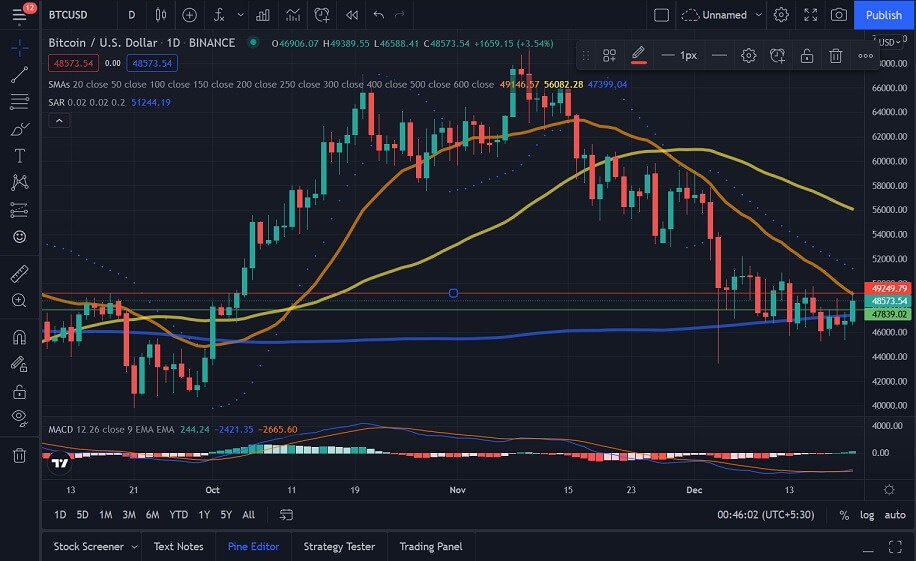 We can see that the MACD has flipped to bullish, and if the price continues to push higher, we could see the Parabolic SAR also flip to bullish.

We can see that the Parabolic SAR and MACD are bullish, indicating that the price could further push up. 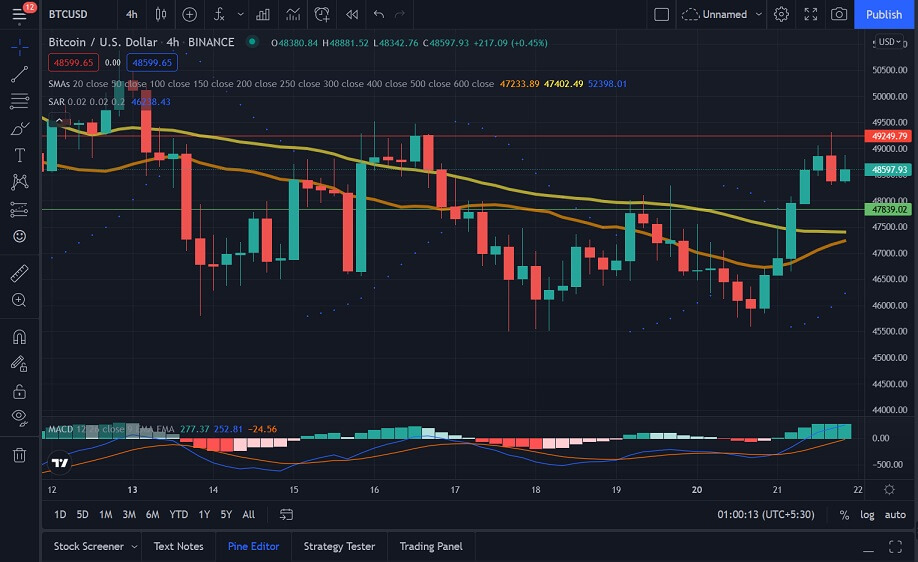 Latest On US Regulation

Capitol Hill played host to a significant moment for crypto adoption in the US Six executives from prominent crypto firms set out to demystify various aspects of their industry. At a hearing chaired by Maxine Waters, crypto execs fought off a decent grilling from politicians.

At the hearing, the crypto executives that testified included Charles Cascarilla, Brian Brooks, Alesia Jeanne Haas, Denelle Dixon, Sam Bankman-Fried, and Jeremy Allaire. Brooks is a former acting comptroller of the currency in the US. He had a brief stint as CEO of Binance.US before becoming CEO of Bitfury.

In answering a question as to whether he viewed cryptocurrency as a security, Brooks responded:

“We don’t know authoritatively what’s a security and what isn’t, because no authority will tell us. But what we can do, at least, is we can tell you the difference between an R-rated asset and a PG-rated asset, and people can make their risk tolerance judgments.”

On Coinbase, Alesia Jeanne Haas, who sits on the board of ANGI Homeservices and Vimeo, said:

“We now securely store 12% of the world’s crypto on our platform. This is across over 150 asset types, and we offer customers the opportunity to earn, sell, send, and to receive and buy more than 100 assets on our platform.”

Haas’ emphasis lay around the utility of crypto and how Coinbase is driving that next phase of crypto adoption.

Haas clarified how Coinbase protects its customers in the event of a hack and how the company mitigates the risk of criminal activity through measures designed to prevent criminal activity (KYC/AML). Patrick McHenry, a representative for North Carolina’s tenth district also spoke. With US regulation as a background, he established where blockchain and cryptocurrency fit into the evolution of the internet.

“Let’s talk about where the internet was, where it’s come to where it’s going. Originally, the internet was a read-only format. In essence, we’re consuming information. And then [there are] additional layers that we placed on it, [and] it became much more interactive. But, counterintuitively, it’s much more interactive but much more centralized in Web 1.0, Web 2.0. What we’re hearing now is Web 3.0. policymakers need to understand the nature of Web 3.0.”

Chinese Bitcoin miners are still running operations even after the recent ban. They are working in stealth, surviving by using off-grid power sources. Earlier, there was migration and a mass exodus of Chinese miners to more crypto-friendly jurisdictions in North America and Central Asia. This was following a blanket ban on cryptocurrency in China. Many less-resourced miners found themselves left out in the cold.

Some miners have remained back due to pandemic travel restrictions, supply chain issues, and complicated overseas contacts. These miners are using a combination of grid power and hydro-power. The miners that use hydro-power tap power off dams dotted across the provinces of Sichuan and Yunnan. These dams are inconspicuous and less likely to attract government attention.

This is especially feasible during the rainy season, which occurs from May to the latter part of fall. Miners construct their infrastructure to make the power from the dams compatible with their mining equipment. One miner reportedly has two sites (8 megawatts and 12 megawatts). The sites use VPNs to evade detection by the government. China Telecom acts as a watchdog for the Chinese government concerning mining activity.

A Chinese cybersecurity firm Qihoo 360 recently released a report. It shows that mining continues to flourish despite a countrywide ban. According to the report, there are around 109,000 active mining internet protocol (IP) addresses every day. Some miners are turning to mining pools to conceal their operations.

Looking at the Bitcoin price chart, we can see that BTC has made a strong recovery during the current session. If the current sentiment persists, we could see BTC push to $49,000.