Bitcoin Price Analysis: BTC Seems To Have Stabilized, Upside Ahead? 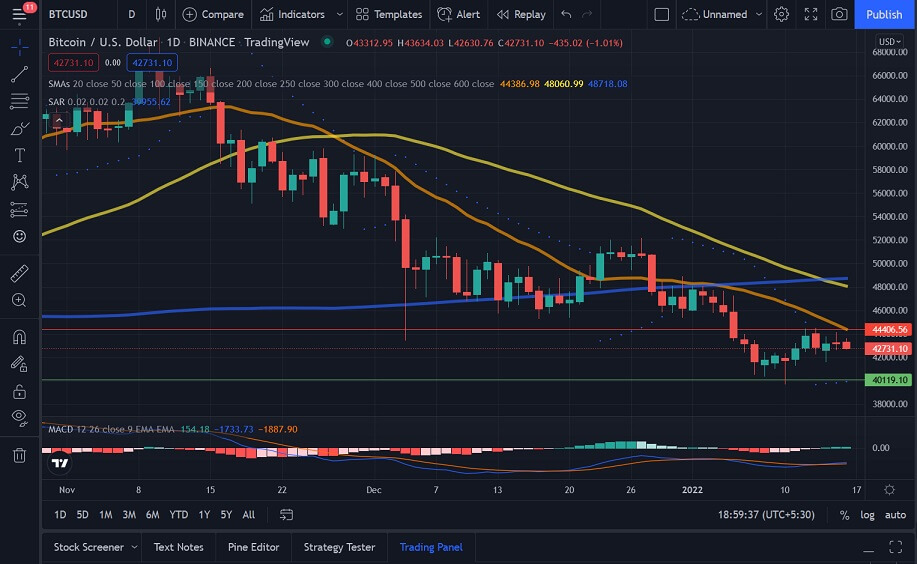 After rising to 443,854, the Bitcoin price fell back on Thursday, dropping by over 2% and settling at $42,843. However, the price was back in the green on Friday, registering a marginal increase of 0.69% and moving to $43,141. The weekend saw BTC move to $43,166 on Saturday before dropping back during the current session. Presently, BTC is down by almost 1%, and we could see the price drop further.

While the Parabolic SAR and MACD are both bullish, if the price continues to drop, we could see them flip to bearish.

Looking at IntoTheBlock’s IOMAP for the Bitcoin price, we can see that BTC faces strong resistance at around $48,390. At this price level, over 2.2 million addresses have sold more than 1.1 million BTC. 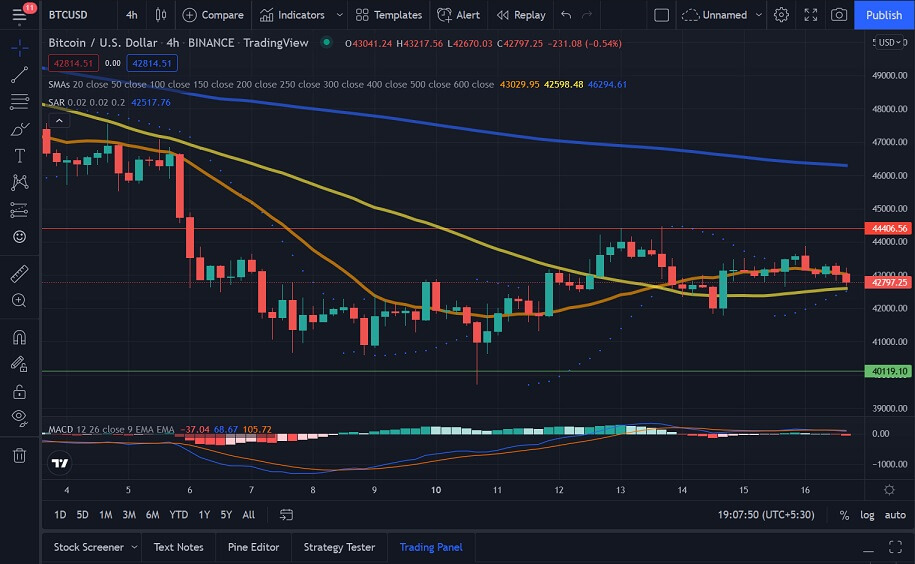 With the global adoption of cryptocurrency increasing, more celebrities and athletes are receiving their pay in digital assets such as Bitcoin. Notably, the UFC heavyweight champion Francis Ngannou recently revealed he is considering taking 50% of his next fight purse in Bitcoin. The Cameroonian, who has his next fight scheduled for January 22, revealed:

“Been talking with my family and friends in the crypto space. Bitcoin is huge in Africa, and I’m thinking of taking half my fight purse in it. Bitcoin is the future, and I’m a believer.”

It’s worth mentioning that the fighter has recently been in contract talks with the UFC, although they have been at loggerheads over a new UFC deal with boxing options. The fighter has said he “will not fight for $500,000, $600,000 anymore,” whether this has anything to do with Ngannou’s interest in Bitcoin as payment for his fight purse remains to be seen.

The champion stated that “Bitcoin is huge in Africa,” which is not an understatement. The African cryptocurrency market increased by over 1,200% in value between July 2020 and June 2021, according to a report by Chainalysis. The firm believes that African nations received roughly $105.6 billion in cryptocurrencies.

The Ultimate Fighting Championship is a prominent worldwide mixed martial arts organization. In July 2021, the company announced a sponsorship and a fight-kit partnership with Crypto.com, one of the world’s largest crypto trading platforms by trading volumes.

Wall Street giant Fidelity recently said many countries and even a central bank could follow El Salvador and Tesla into Bitcoin this year, predicting those that buy BTC when the price is low "will be better off competitively than their peers."

"There is very high stakes game theory at play here, whereby if bitcoin adoption increases, the countries that secure some bitcoin today will be better off competitively than their peers. [We] wouldn't be surprised to see other sovereign nation states acquire bitcoin in 2022 and perhaps even see a central bank make an acquisition."

In September, El Salvador made Bitcoin its official currency alongside the US dollar and began buying bitcoin. This year, the country has said it will buy another $500 million worth of bitcoin, funded by the issuance of $1 billion worth of tokenized bonds, and plans to create an ultra low tax "Bitcoin City."

Politicians in other countries are watching El Salvador's Bitcoin experiment for signs of success, and some have said they'd consider a similar move if it pays off. This week, the mayor of Rio de Janeiro reportedly said he plans to allocate 1% of the city's treasury reserves to cryptocurrencies, while in the US, the mayor of Miami, Francis Suarez, last year said he wants to put some of the city's treasury into Bitcoin.

“From 2020 to 2021, the number of North Korean-linked hacks jumped from four to seven, and the value extracted from these hacks grew by 40%. Once North Korea gained custody of the funds, they began a careful laundering process to cover up and cash out.”

While Chainalysis neglected to identify every target of the hacks, the report detailed that they had primarily been investment firms and centralized exchanges. One such platform, Liquid.com, had reported unauthorized access to several wallets it managed in August last year.

According to the report, the hackers used various skills to extract funds from these organizations’ wallets into North Korea-controlled addresses. These included phishing lures, code exploits, malware, and advanced social engineering techniques. Additionally, the report detailed that North Korea significantly increased the use of ‘mixers’ to launder the stolen cryptocurrency.

It seems likely that many of these cyberattacks had been carried out by the Lazarus Group, which the United States said is controlled by the Reconnaissance General Bureau, the primary intelligence bureau of North Korea. The group has previously been accused of involvement in the “Wanna Cry” ransomware attacks and the cyberattacks perpetrated against Sony Pictures in 2014.

Looking at the Bitcoin price chart, we can see that BTC has dropped during the ongoing session. If the current sentiment persists, we could see BTC drop to $42,500.