The Bitcoin price has shown a marginal recovery during the ongoing session as buyers look to push the price back above $47,000. BTC was highly bullish over the weekend and had registered a significant increase of almost 5% on Saturday, an increase that saw the price push up to $49,541. Sunday saw another increase of 1.74%, an increase that took BTC past $50,000 to $50,405. However, despite the bullish sentiment, the price crashed on Monday, dropping by over 7% and settling at $46,843.

The Bitcoin price started the previous week on a fairly positive note, as it registered an increase of 1.84% on Monday and rose to $50,142. On Tuesday, BTC remained in the green, registering a marginal increase of 0.83%, and then registered another marginal increase on Wednesday to settle at $50,669. However, the price dropped significantly on Thursday, as sellers took control of the market, pushing the price down by over 5% to $48,042, as BTC slipped below $50,000. 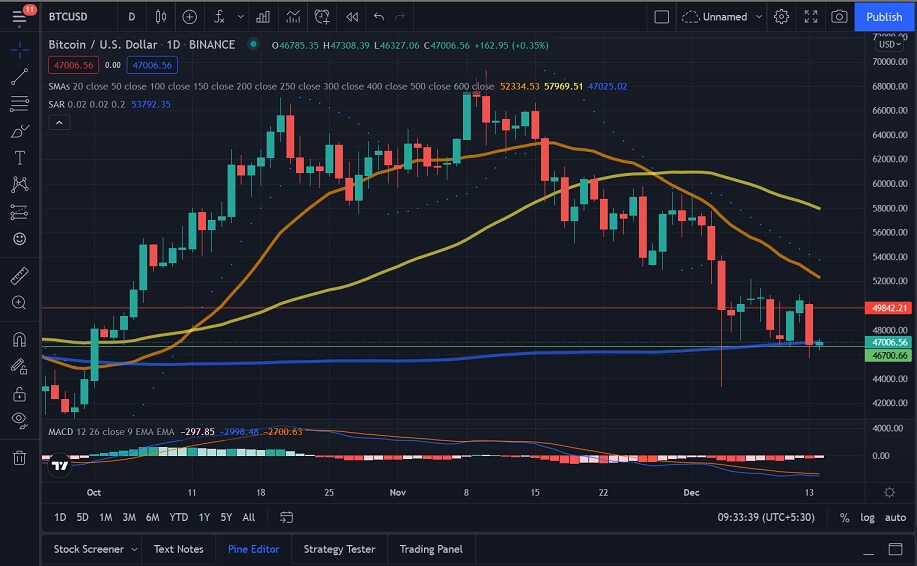 After dropping by over 5% on Thursday, the Bitcoin price remained in the red on Friday, falling by 1.54% and settling at $47,304. Despite the bearish sentiment, BTC recovered strongly over the weekend, registering an increase of 4.73% on Saturday and settling at $49,541. Sunday saw BTC continue to push higher, rising by 1.74% and ending the weekend at $50,405. However, Monday saw BTC fall back drastically, dropping by over 7%, slipping below $50,000, and settling at $46,843. The current session has seen recovery as BTC climbed back above $47,000 at the time of writing.

We can see that the Parabolic SAR is still bearish, indicating the price could drop further.

Looking at IntoTheBlock’s IOMAP for the Bitcoin price, we can see that BTC faces strong resistance at around $49,111. At this price level, over 1.6 million addresses have sold more than 800,000 BTC.

The 4-hour Bitcoin price chart shows us that BTC had pushed up to $51,783 on the 7th. However, BTC could not stay at this level, and the price dropped to $49,224, slipping back below the 20-bar SMA. A marginal increase saw the price push back above the SMA but then fell to $47,595 on the 10th. BTC was able to stay at this level for the subsequent few sessions before pushing back above the 20-bar SMA on the 12th when the price rose to $49,535. BTC continued to rise from this level, pushing above the 50-bar SMA and settling at $50,293. However, after reaching this level, the price fell drastically, slipping below the 50 and 20-bar SMAs to its current position of $47,130. 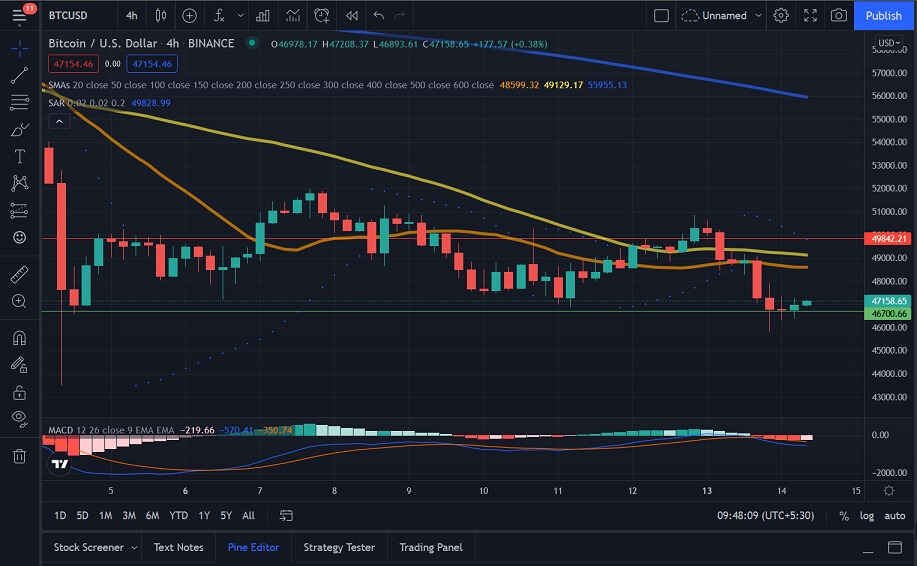 Hackers took over the official Twitter account of Indian Prime Minister Narendra Modi and used it to promote a Bitcoin giveaway scam. The fraudulent message said that India had declared bitcoin legal tender and was conducting a giveaway to celebrate the move.

“India has officially adopted Bitcoin as a legal tender. The government has officially bought 500 BTC and is distributing them to all residents of the country.”

The prime minister's office later clarified that Modi's account was "briefly compromised" and was later secured. The office said:

This is not the first incident where official Twitter accounts have been compromised to promote a crypto giveaway scam. However, the scale of 2020's site-wide account takeovers was more significant.

Bad actors hacked Twitter accounts of crypto exchanges, companies, and public figures like Joe Biden, Bill Gates, and Elon Musk. The tweets posted variations on the same theme: promoting bitcoin/crypto giveaway scams, which try to trick people into sending funds to an address in the hope of receiving more.

Twitter said it was a “coordinated social engineering attack” by hackers “who successfully targeted some of our employees with access to internal systems and tools.”

As Bitcoin struggles to trade above $50,000 amid heightened volatility, the number of investors transferring the asset to exchanges appears to have been impacted.

The number of Bitcoin addresses sending BTC to exchanges recently hit a new 13-month low of 4,197.9 for the seven-day moving average, per Glassnode data.

Furthermore, the metric which tracks the number of unique addresses that appear as a sender in a transaction sending funds to exchanges recorded the last 13-month low on November 24, 2021, at 4,202.91. The number of addresses sending Bitcoin to exchanges indicates that investors potentially prefer to hold the asset in anticipation of a new rally.

The number one ranked cryptocurrency has undergone high volatility in recent weeks, dropping below the crucial $60,000 mark and eventually $50,000. Bitcoin’s plunge also impacted the entire market, with other assets recording negative gains.

Consequently, it can also be assumed that holders were unwilling to transfer the asset to exchanges because they would likely incur losses when they trade their BTC against other tokens.

This also correlates with Bitcoin’s growing status as a store of value and a hedge against inflation concerns. Worth noting is that usually, investors who store their Bitcoin in cold wallets tend to move the asset to cryptocurrency trading platforms in a bid to profit from a high price movement. However, the ongoing volatility has resulted in losses for investors.

Looking at the Bitcoin price chart, we can see that BTC has recovered during the ongoing session, with the price back above $47,000. If the current sentiment persists, we could see BTC push towards $48,000.