The Bitcoin price fell back during the ongoing session as sellers took control. BTC had registered a significant drop over the weekend, falling by 7.57% on Saturday. On Sunday, the price continued to drop before posting a marginal recovery on Monday, rising by 1.72%. BTC could not register much movement on Tuesday and Wednesday, only marginally pushing up before dropping during the ongoing session.

The Bitcoin price started the previous week, posting an increase of 0.47% on Monday. The price fell back on Tuesday, dropping by 1.44%, but was back in the green on Wednesday, pushing up by 0.45% and settling at $57,229. However, the price fell back after reaching this level, starting with a drop of 1.04% on Thursday. Friday saw a significant drop, as BTC slipped by over 5% and settled at $53,752. 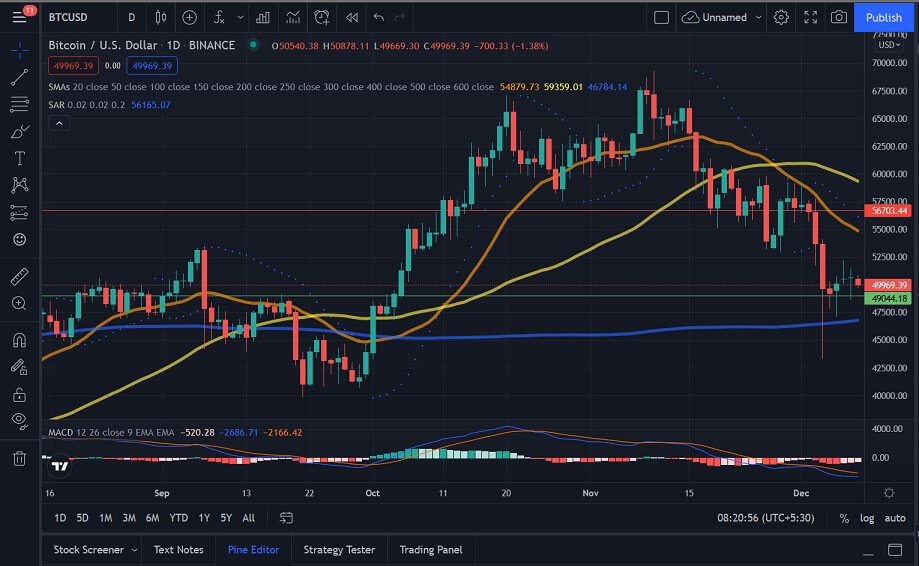 The Bitcoin price continued to drop over the weekend, registering a fall of 7.57% on Saturday and dropping to $49,683. Sunday saw BTC remain in the red, as the price fell to $49,237. However, after dropping to this level, BTC recovered on Monday, rising by 1.72% and pushing back above $50,000. However, BTC could only register a marginal increase on Tuesday and Wednesday, settling at $40,669, before dropping back below $50,000 during the current session.

We can see that the Parabolic SAR is currently bearish, indicating that the price could drop. However, BTC has strong support at around $49,000, so we may see the price recover from that level.

We can see that the MACD has flipped to bullish, but if the price continues to drop, we could see it flip to bearish. 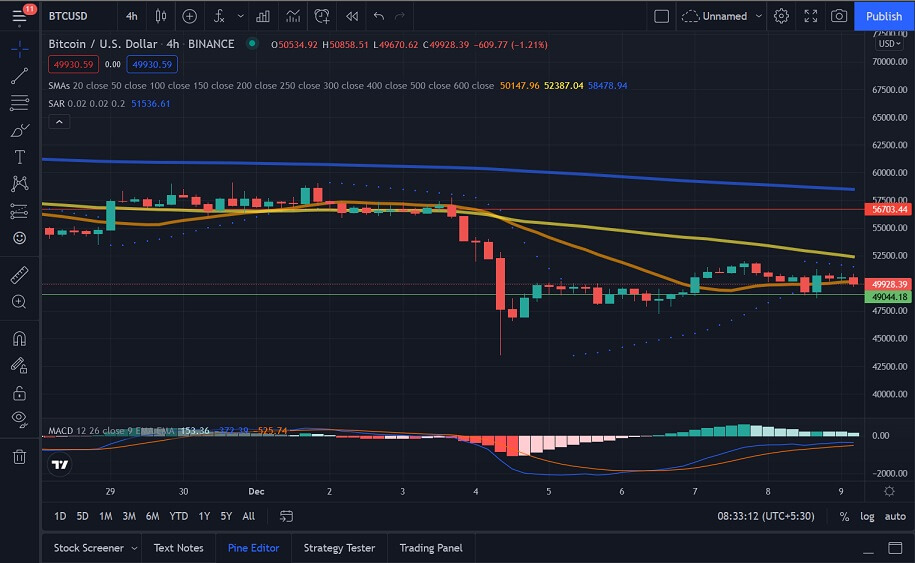 CIA Is Working On Cryptocurrency Projects

Responding to a question about whether the intelligence agency was able to constrain ransomware attacks emanating from abroad, Burns said his predecessor "had set in motion a number of different projects focused on cryptocurrency and trying to look at second- and third-order consequences as well and helping with our colleagues in other parts of the US government to provide solid intelligence on what we're seeing."

Ransomware is a type of malicious software designed to shut down a computer or network until payment is received, often in Bitcoin or the privacy coin Monero. Attacks this year have shut down a major oil pipeline, meat processing plants, and businesses' IT infrastructure. The Biden administration earlier labeled ransomware a "priority" and said it would use crypto tracking to address it.

Burns did not clarify which predecessor he was referring to. Five other people have led the agency—two of them in an acting capacity—in the last five years alone, including John Brennan, Mike Pompeo, and Gina Haspel. Yet the likely reference is to his immediate predecessor, David Cohen.

Michael Morell, who served as acting director of the agency on two separate occasions under President Obama, also sees the value of Bitcoin to the intelligence community.

Earlier this year, Morell called blockchain technology a "boon for surveillance" in a report, which defended the cryptocurrency against claims that its best use case is for criminal enterprise. Instead, the public nature of transactions makes it an "underutilized forensic tool for governments to identify illicit activity."

Payments giant Visa recently announced the formation of a new cryptocurrency-focused advisory unit to help clients get to grips with the sector. The unit will sit within the company’s broader consulting and analytics division, which offers payments-related consultancy services.

The move comes amid growing corporate demand for guidance on engaging with cryptocurrencies, stablecoins, and even non-fungible tokens (NFTs) emerging significantly. Nikola Plecas, Visa’s crypto business lead in Europe, said the firm would offer a range of advice, from examining the impact of key trends within the sector to devising strategies for entering the market. He said:

“The focus that we’ve seen so far, when it comes to our clients, is really on what the impact of the trends we’re seeing in crypto will be on their everyday business.”

Visa has been selling consulting services to companies interested in crypto for some time but formalized the new crypto unit in response to growing client demand, according to Plecas. The firm is also an active operator in the sector, offering payment services to exchanges and wallet firms.

Visa currently works with 60 crypto platforms globally. Alongside the new consulting unit, Visa has unveiled the results of a survey of more than 6,000 financial decision-makers across eight markets. Headline findings from the survey suggest that crypto awareness among this group is now at 94%.

Iceland Clamps Down On Bitcoin Mining

National Iceland electrical company Landsvirkjun recently cut the amount of power it will provide for some industries, including aluminum smelters and Bitcoin miners. A representative from the island’s power utility reported they were forced to reduce energy allocations to southwestern Bitcoin miners and various industrial facilities. This is due to issues, including a problem at a power station, low hydro-reservoir levels, and accessing energy from an external supplier.

Mining operations have long been attracted to the country due to its abundance of geothermal energy, which creates a cheap and plentiful supply of renewable energy. But from December 7, Landsvirkjun noted that for an unknown period, it would reject new requests for electricity from mining operations.

Canada’s Hive Blockchain Technologies, Genesis Mining, and Bitfury Holding are the three main Bitcoin mining companies that have opened facilities in Iceland. For nearly a decade, miners have tried to realize the promise of environmentally-friendly Bitcoin mining in Iceland.

Less than 1% of the country’s electricity is generated from non-renewable sources.

The country’s aluminum smelting industry has been hit hardest by the distribution failure. Aluminum prices rose 1.1% on December 7 to reflect the bottleneck in supply created by a recent surge in demand and the present power supply crunch.

Looking at the Bitcoin price chart, we can see that BTC has fallen during the ongoing session. If the current sentiment persists, we could see BTC drop to $49,000 where the price has support.