The Bitcoin price has moved back past $58,000 during the ongoing session, with buyers in control of the market. BTC had started the week in the red, as the price dropped to $56,335 after registering a drop of 5.795. The price did recover on Tuesday, as it pushed to $57,678 but fell back in the red on Wednesday, registering a marginal drop and falling to $57,378 before rising back above $58,000 during the current session.

The Bitcoin price had started the previous week on a very bearish note, as the price fell by 3.30%, dropping to $63,736. On Tuesday, the price continued to drop as BTC slipped below the 20-day SMA and settled at $60,275. Wednesday saw a marginal recovery, but the price was back in the red on Thursday, with BTC registering a drop of over 6%, slipping below the 50-day SMA and settling at $56,704. However, despite the bearish sentiment, BTC pushed up significantly on Friday, rising by 2.51% and settling at $58,128.

The Bitcoin price continued to push up on Saturday, rising to $59,914, where the 50-day SMA was acting as resistance. As a result, BTC registered a marginal drop on Sunday before falling by almost 6% on Monday and settling at $56,335. On Tuesday, the price recovered, pushing to $57,678, before falling back in the red on Wednesday and registering a marginal drop. The current session sees BTC back in the green, with the price currently up by over 2%.

Looking at IntoTheBlock’s IOMAP for the Bitcoin price, we can see that BTC has strong support at around $56,335. At this price level, over 1.7 million addresses have bought over 1 million BTC. 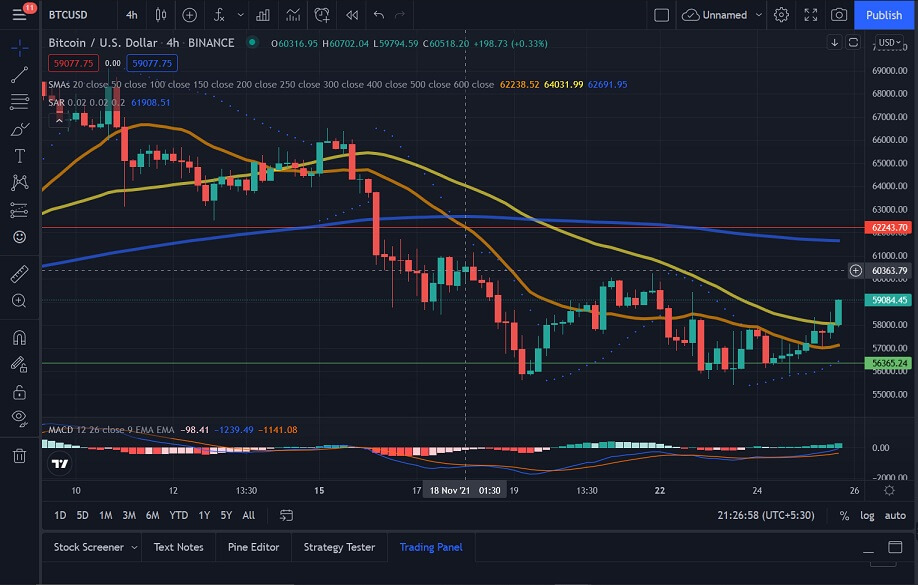 “Looking into the future, we will have to make an unpopular decision about the construction of a nuclear power plant."

Kazakhstan’s only nuclear power plant closed in 1999. Despite the country’s status as a leading producer of uranium, citizens remain uneasy after years of atomic weapons testing under the Soviet Union. Kazakh health authorities estimate 1.5 million citizens were exposed to nuclear fallout from 110 tests between 1949 and 1963.

However, 1,200-megawatts worth of demand (pegged to be the result of incoming Bitcoin miners from neighboring China) have resulted in several power cuts across the once energy-rich country. Kazakhstan’s hashrate quadrupled to over 18% after welcoming Bitcoin miners ousted from China earlier this year.

The Central Asian nation was rated the second-largest Bitcoin miner globally as of August. According to the Cambridge Bitcoin Electricity Consumption Index’s IP data, Kazakhstan trailed the US, which controlled over 35% of the world Bitcoin mining power.

To fuel the Bitcoin mining influx, demand on the country’s energy supply increased around eight times more than its usual 1-2% annual growth.

The Morgan Stanley Institutional Fund’s Growth Portfolio reported holding 3,642,118 shares of GBTC at the end of Q3, compared to 2,130,153 at the end of the prior quarter. The offering’s Global Opportunity Portfolio holds around 1,463,714 shares of the trust, the filing indicated, up from 919,805 three months before.

In a research note, Morningstar Analyst Bobby Blue said that 47 mutual funds and separately managed accounts held GBTC as of September, the most of any crypto investment product. He noted that Ark Invest is one of the largest holders of the trust’s shares, investing about $375 million through its Ark Next Generation Internet ETF and its SMAs and model portfolios.

GBTC, a grantor trust, currently has $36.7 billion assets under management. The fund’s 2% expense ratio and limitations as a trust have led to substantial differences between the returns of the product and the returns of bitcoin itself, he added.

The offering had returned 42% in 2021 as of October 29, according to Morningstar data.

Is Stripe Bringing Back Crypto Payments

Stripe co-founder John Collison has hinted that the company may accept crypto as a payment method again after ending Bitcoin support in 2018. Speaking at the Fintech Abu Dhabi festival Tuesday, Collison hinted that cryptocurrency payments were not out of the question for the financial services company.

When asked whether Stripe would start accepting cryptocurrencies as a payment method again, Collison said that while the firm does not yet, it is “not implausible” that it would in the future. Collison’s comment marks a change in sentiment. Stripe ended support for Bitcoin payments in 2018, citing extreme volatility and a lack of efficiency in making day-to-day payments as reasons for dropping the top cryptocurrency.

“There have been a lot of developments of late with an eye to making cryptocurrencies better and, in particular, scalable and acceptable cost as a payment method.”

He went on to add that blockchains like Solana and innovations such as Bitcoin’s Lightning Network have the potential to fulfill the role of scalable, low-cost crypto transactions.

Founded in 2009, Stripe has quickly become the largest privately-held fintech company in the US. The company has attracted investment from venture capital funds such as Sequoia Capital and Andreessen Horowitz.

Looking at the Bitcoin price chart, we can see that BTC has made a strong recovery during the current session. If the current sentiment persists, we could see BTC push towards $59,100.