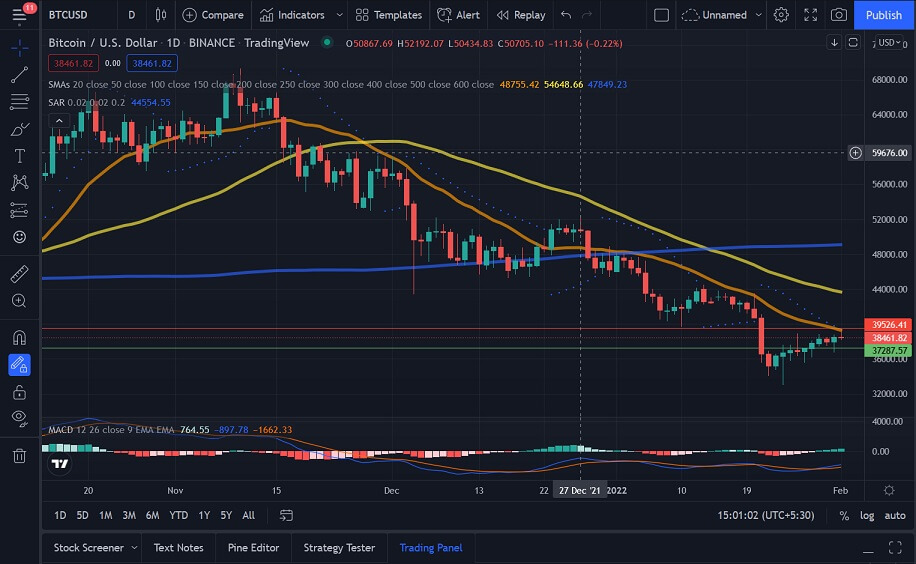 After registering a marginal drop on Wednesday, the Bitcoin price recovered on Thursday, rising by 0.86% and moving to $37,196. On Friday, BTC remained in the green, rising by 1.60% and moving to $37,793. The weekend started on a positive note for BTC as it pushed up by 1.31% on Saturday but fell back on Sunday, dropping by 0.89% and ending the weekend at $37,944. However, the price recovered on Monday, rising by 1.42% and moving to $38,482. The current session sees BTC marginally up, with BTC dropping back significantly at the time of writing and slipping below $38,500.

We can see that the MACD is currently bullish, indicating that BTC could push back up from its current level. However, if BTC drops further, we could see the MACD flip to bearish.

IntoTheBlock’s IOMAP for the Bitcoin price shows us that BTC has strong support at around $37,246. At this price level, over 1.2 million addresses have bought more than 721,000 BTC.

We can see that the Parabolic SAR and MACD are bullish, but if BTC continues to drop, we could see them flip to bearish.

The recent bulletin covering the agenda for India's lower house of parliament includes “a lecture on understanding cryptocurrency” and its economic impact. According to a publication from the Lok Sabha, the Parliamentary Research and Training Institute for Democracies group within the government has organized a training evening for lawmakers regarding crypto and its effects on the Indian economy.

In addition, the legislative business calendar for the lower house of parliament no longer includes a bill that could potentially ban crypto in the country. The Cryptocurrency and Regulation of Official Digital Currency Bill does not appear as one of the 15 bills the government body will consider when it convenes for its Budget Session.

Previously published texts of the bill proposed banning “all private cryptocurrencies” in India except for assets promoting “the underlying technology of cryptocurrency and its uses.”

The proposed legislation has popped up on the country’s parliamentary agenda multiple times since the Indian Supreme Court overturned a blanket ban on crypto in 2020 imposed by the central bank. The Reserve Bank of India may also be moving forward soon with trials of a central bank digital currency, a digital rupee, but the officials have not yet announced a test run for the CBDC.

Local media outlets have suggested that some lawmakers in India are seeking different legislative paths to handle the growing crypto market, such as taxing crypto earnings differently. In October, officials from the Finance Ministry reportedly considered implementing a legal framework to treat crypto more like a commodity than a currency.

“Bitcoin has jumped into the number three spot in this ranking through significant growth in transaction volumes. That transaction volume growth, while not always even year-to-year, has kept up at a torrid pace when looking at 5-year compound annual growth rates.”

Bitcoin’s transaction volume increased by almost 100% annually over the past five years, data shows. NYDIG’s report comes as consumer spending starts to rebound after the pandemic-induced slump, but it is unclear if the trend will continue, given inflationary pressure and rising concern over new Covid variants.

While analysts had previously predicted consumer spending to increase through 2022, shifting monetary policy has created uncertainty. Consumer spending was down 0.6% in December, a surprising drop, considering seasonal spending trends.

Some experts believe the trend could mean Bitcoin is due for a rally. In a recent report, researchers from CoinShares wrote:

“On the one hand, the US Federal Reserve has a mandate to control inflation, but it also has a mandate of stable prices. It is very challenging to see how the Fed can control both at present. Consequently, we see there being a high risk of a Fed policy error (waiting too long and then raising interest rates too aggressively), with the USD then selling off, both of which are likely to be supportive of Bitcoin and other real assets.”

Per a survey conducted by Capitalize, Bitcoin and cryptocurrencies have been gaining relevance as retirement investment options. Digital assets, once synonyms with speculation, and gambling, have acquired prestige as one of the best ways to secure people’s future.

The firm interviewed 821 employees and 203 financial experts in the United States. Their purpose was to explore the sentiment around adding cryptocurrencies to their retirement portfolios and determine the best time to purchase these digital assets.

The survey concluded that people have become more optimistic about cryptocurrencies in the past ten years. Over 60% of the respondents believe digital assets are “a strong retirement investment option,” despite their volatility.

Younger generations seem to be more optimistic about Bitcoin and cryptocurrencies as retirement investment options. 78.2% of the respondent classified as “Gen Z,” and 60.4% of “Millennials” are bullish on digital assets versus 50.3% of “Baby Boomers.”

Moreover, the survey founds that Bitcoin and other cryptocurrencies dominate the investment retirement field, with 76.5% of respondents revealing them as part of their portfolio. However, non-fungible tokens (NFTs) and Dogecoin (DOGE)/memecoins are gaining more relevance, with 35.8% and 19.3% of respondents saying they will hold it until retirement. Capitalize added:

"(…) most survey respondents investing in digital assets took a long-term approach. Over three-quarters reported purchasing cryptocurrencies they intend to hold until retirement."

Looking at the Bitcoin price chart, we can see that BTC has fallen into the red during the ongoing session, after nearly pushing past $39,000. If BTC can recover from this level, we could see the price push back towards $39,000. However, if sellers retain the session, we could see BTC drop below $38,000.