The Bitcoin price is currently down by over 1.50%, as a bearish market sentiment drove the price down significantly. BTC was bearish at the start of the week as well, dropping by 1.28% on Monday. The price remained in the red on Tuesday, dropping by nearly 2% and settling at $45,871. Wednesday saw BTC drop by nearly 5%, as the price dropped to $43,672 before dropping even further during the ongoing session.

The Bitcoin price started the previous week on a bearish note, registering a marginal drop on Monday. BTC registered a drastic fall on Tuesday, falling by over 6%, slipping below the 20 and 200-day SMAs and settling at $47,599. BTC continued to drop on Wednesday as the price fell to $46,459. BTC recovered on Thursday despite the bearish sentiment, rising by 1.50% and moving to $47,154. However, Friday saw BTC back in the red, as the price dropped to $46,197. 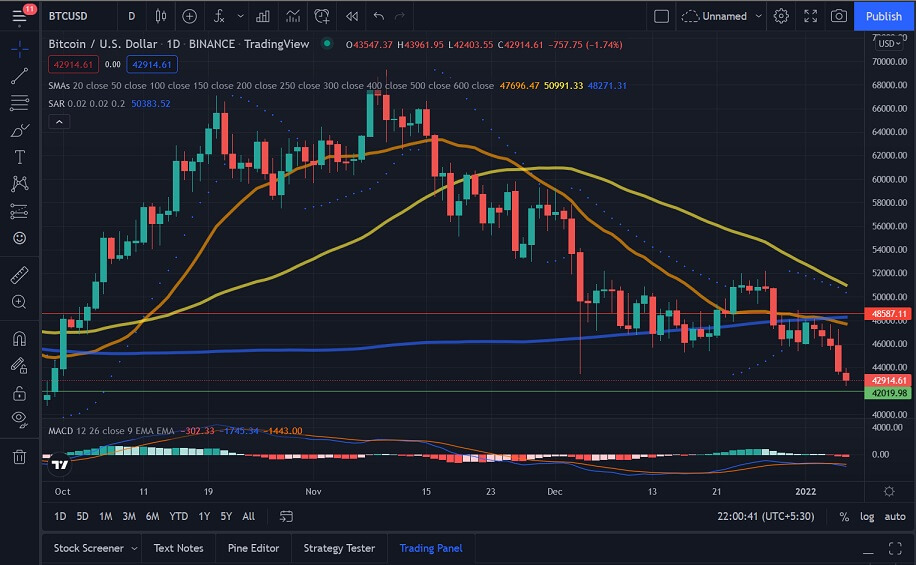 After dropping to $46,197 on Friday, the Bitcoin price recovered on Saturday, rising by over 3% and settling at $47,797. However, the price fell back on Sunday, dropping by 1% and ending the weekend at $47,317. The bearish sentiment continued on Monday, as BTC started the week in the red, falling by 1.28% on Monday. On Tuesday, the price continued to drop as BTC fell by nearly 2% and settled at $45,871. Wednesday saw BTC register a significant drop, as the price fell by nearly 5%, dropping to $43,672. The current session has seen BTC slip below $43,000, with sellers in control of the session. The Parabolic SAR and MACD are both bearish, indicating that we could see the price drop further.

Looking at IntoTheBlock’s IOMAP for the Bitcoin price, we can see that BTC faces strong resistance at around $48,567. At this price level, over 2.4 million addresses have sold more than 1.2 million BTC. 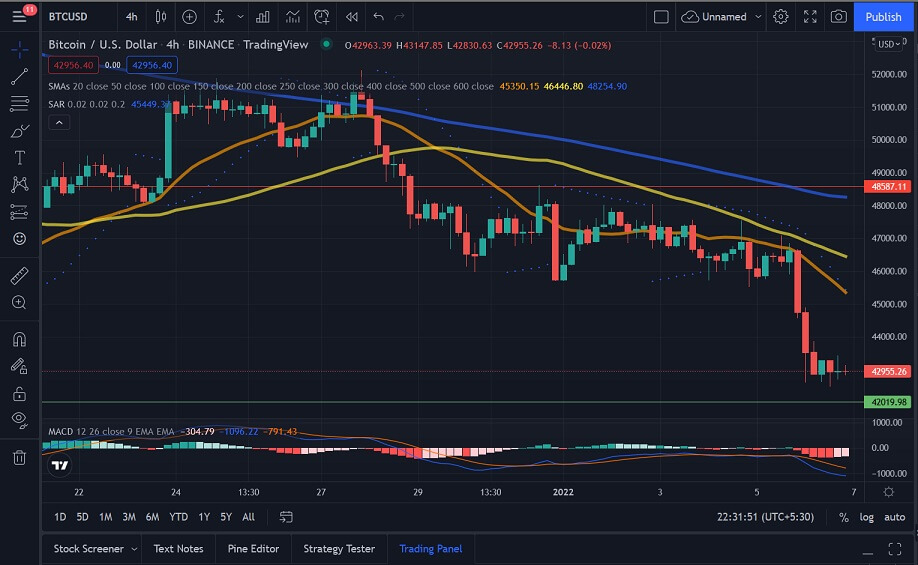 During a recent interview for CNBC, Kevin O’Leary – known as one of the hosts in the reality TV show Shark Tank – spoke about non-fungible tokens and their potential growth in the following years. Like 2021, NFTs will continue being highly popular and could even become a bigger market than bitcoin, the Canadian opined.

His belief in digital collectibles stems from the idea that they can prove ownership of real-world items, such as cars or watches:

“You’re going to see a lot of movement in terms of doing authentication and insurance policies and real estate transfer taxes all online over the next few years, making NFTs a much bigger, more fluid market potentially than just bitcoin alone.”

In conclusion, Mr. Wonderful said he is “investing on both sides of that equation.” A few months back, Shark Tank’s host had a somewhat different stance on the matter, stating that the primary cryptocurrency is the right long-term investment tool. Comparing it to other digital assets such as Ether, he said:

“That’s the gold standard of digital currency. Nothing else is going to replace it.”

Apart from bitcoin and non-fungible tokens, O’Leary is a keen proponent of other digital assets, including Ether, Solana, and Circle’s stablecoin pegged to the US dollar – USDC. However, there is one token that he is not in favor of – Dogecoin. According to Mr. Wonderful, investing in the memecoin is like gambling.

He went further, saying that DOGE has no inherent value and should be classified as pure speculation:

“When you speculate on something like Dogecoin – that’s no different than going to Las Vegas and putting your money on red or black – it’s a pure speculation.”

Kazakhstan's government earlier cut off internet access amid escalating protests, and the country's bitcoin mining operations appear to be caught up in the fray.

A comparison of mining pool hash rates from half a day ago — preceding the broader internet crackdown, as reported by multiple news outlets— and now indicates a decline in rates for numerous mining pools. The most significantly impacted are 1THash (82% decline), OKExPool (46.3% decline) and KuCoinPool (22.7% decline).

The situation is notable given that Kazakhstan is home to as much as 18% of the world's bitcoin hashrate, as estimated last fall by the Cambridge Centre for Alternative Finance. Major pools, including F2Pool, AntPool, and ViaBTC, saw declines of 12.8%, 11.6%, and 19.2%, respectively.

The Kazakh government moved to halt the country's internet access this week. Per The Guardian, this followed tightened access to mobile messaging platforms. Even so, the hashrate impact is far from the dramatic drop seen last year when China moved to ban the country's bitcoin mining ecosystem, which had long been the world's largest and most technologically dominant.

Still, the ongoing crisis in Kazakhstan, which has declared a country-wide state of emergency, is the latest headache for miners who hoped for proverbially greener pastures away from China.

Bitcoin has fallen to about $43,000 after surging to a record high near $69,000 in November. Yet Goldman Sachs said in a recent report that Bitcoin could more than double, to a little over $100,000 per coin, within the next five years.

Zach Pandl, the co-head of global foreign exchange, rates, and emerging market strategy for Goldman Sachs, said in the report:

"We think that bitcoin's market share will most likely rise over time as a byproduct of broader adoption of digital assets."

Pandl argued that Bitcoin will increasingly steal market share from gold, which recently stalled out around $1,800 per ounce. He said Bitcoin currently makes up about 20% of the so-called "store of value" market, a term used to describe gold, Bitcoin, and other alternative assets like currencies and commodities whose prices should not depreciate much over a long period of time.

Pandl believes BTC could eventually make up 50% of the store of value market, which could push bitcoin about 17% to 18% higher annually for the next five years to top the $100,000 level.

"We think that comparing its market capitalization to gold can help put parameters on plausible outcomes for bitcoin returns."

The Bitcoin price chart shows us that BTC has been extremely bearish throughout the week, with prices in a downward spiral. However, if BTC finds support at this level, we could see the price recover from $43,000.