The Bitcoin price started the previous weekend on a fairly bullish note, rising by 2.41% and settling at $47,243. However, the price fell back on Sunday, dropping by a little over 1% to $46,657. Monday saw BTC back in the green, registering a marginal increase of 0.55%, before rising by over 4% on Tuesday, rising above the 200-day SMA and settling at $48,875. At this level, the 20-day SMA was acting as resistance, and the price fell back marginally, dropping to $48,457 on Wednesday. 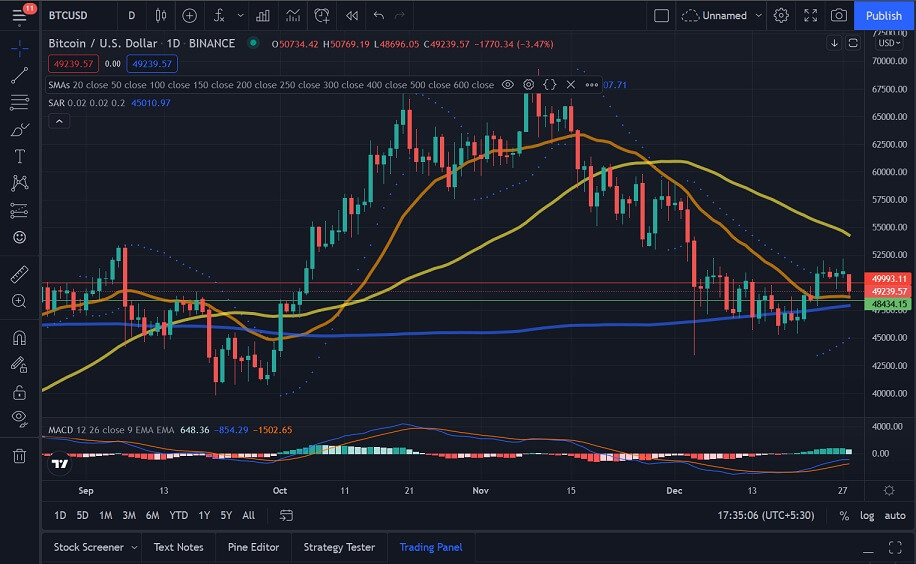 After dropping to $48,457 on Wednesday, the Bitcoin price pushed up significantly on Thursday, rising by nearly 5% and moving to $50,831. On Friday, the price remained in the green, registering a marginal increase, before dropping back on Saturday and settling at $50,539. Sunday saw BTC recover, rising to $50,858, before rising by 0.30% on Monday and moving past $51,000. However, BTC has registered a significant drop during the current session, with sellers driving the price below $50,000.

Looking at IntoTheBlock’s IOMAP for the Bitcoin price, we can see that BTC faces strong resistance at around 49,945. At this price level, over 1.2 million addresses have sold more than 800,000 BTC. 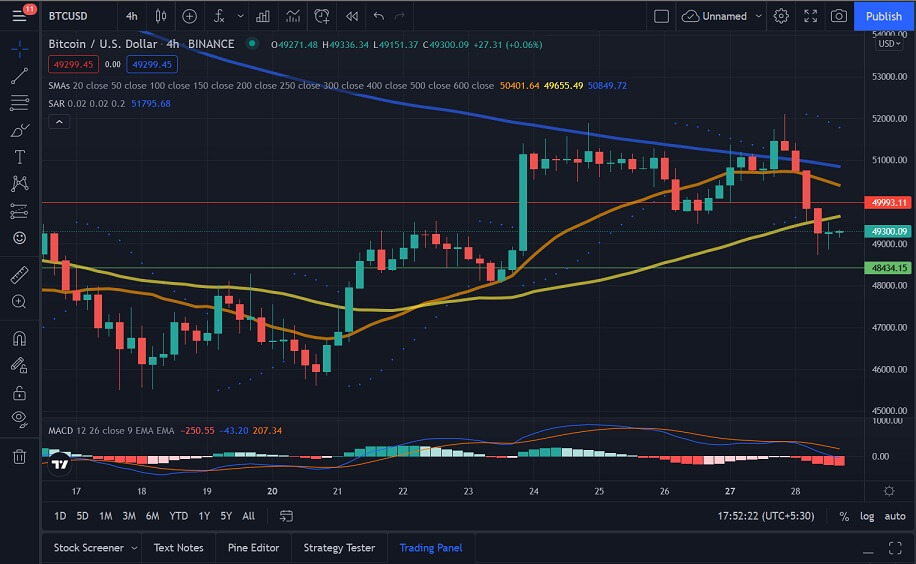 FTX CEO Sam Bankman-Fried recently shared his outlook on crypto in a lengthy Twitter thread. He singled out growing tensions between regulators and cryptocurrency companies as one of the key issues within the industry, with both sides becoming increasingly frustrated.

Bankman-Fried believes that there should be a unified regulatory regime for cryptocurrency businesses, thus avoiding regulatory gaps:

"The goal of all of this is to come out stronger. To emerge with customer protection and regulatory clarity in a way that consumers and institutions alike feel comfortable interfacing with the digital asset ecosystem."

The crypto mogul also addressed scaling problems, arguing that existing blockchains are not fast enough for crypto to reach mass acceptance. He added that not a single chain has reached the required level of scalability:

"I always laugh when a blockchain says they're already fast. None are! Fast means millions of TPS. No one is there yet."

In a recent interview with Business Insider, Bankman-Fried, the richest known person in crypto with a net worth of $22.5 billion, spoke about the future of his FTX exchange, claiming that his biggest fear is seeing it become "slow and dysfunctional."

As an ardent supporter of effective altruism, the crypto billionaire believes that crypto is a force for good:

"The industry has the potential to improve a lot of people's lives."

Crypto tracking platform Whale Alert recently shared a series of consecutive tweets showing that anonymous crypto wallets have transferred a whopping $3.9 billion worth of Bitcoin within just a couple of hours.

Three transfers of 15,047 BTC and three carrying 10,158 Bitcoins were made between wallets tagged as "unknown."

The equivalent of the total BTC amount shifted here is $3.917 billion in fiat. Each of the transactions cost merely $0.70 to perform. Experts believe that the recent decline of the Bitcoin price was caused by multiple liquidations in the Bitcoin futures market.

According to analytics provider Coinglass, nearly $300 million in liquidations occurred over 24 hours, when the positions of more than 109,000 traders were closed. Per earlier reports, the leading digital currency managed to regain the $50,000 level as traders hoped for the so-called " Santa rally" to occur.

This term was invented back in 1972. It refers to a rise in the price on the stock market in the last few days of December. However, CEO of Galaxy Digital Mike Novogratz does not expect Bitcoin to show any splendid surges in the first quarter of 2022. The reason for that, he stated, is the bearish sentiment demonstrated by stock market participants.

Ex-Google Engineer Praises BTC As One Of The “Fastest Tokens”

The recent DCentral Miami conference brought together some of the cryptocurrency industry’s brightest minds to exchange ideas. Speaking with Kitco News anchor David Lin at the event, former Google engineer JHL shared his thoughts on the utility of Bitcoin.

Discussing what can supplant Bitcoin as a store of value, JHL said that many other tokens or projects have more utility than the flagship digital asset. This led to the argument whether Bitcoin has no intrinsic value because it does not do anything; with some arguing, it has no utility, so should it be priced at zero.

"It’s an interesting question. I think you know there are things that came before Bitcoin that might be in a similar position like some say gold and those things are obviously very valuable now. So I think that doesn’t necessarily mean the Bitcoin price should be zero.”

The contributor noted as far as transaction speeds and costs go, Bitcoin “will always be one of the fastest to transact and one of the cheapest” since whichever blockchain or group of blockchains wins the race, as those blockchains will likely have some way of bridging Bitcoin to them.

“You can’t say the same thing will be true about any other token. It’s just because Bitcoin is so big and so well adopted now that I think any blockchain that comes about will likely have a big bridge from Bitcoin to that blockchain.”