The Bitcoin price continued to push higher as buyers maintained their control over the market, with BTC pushing past $44,000 during the current session. BTC had surged to $41,623 on Friday before registering a marginal drop on Saturday, falling to $41,419. BTC recovered on Sunday, rising by 2.39% and ending the weekend at $42,409. Monday saw BTC remain in the green, as it pushed past the 50-day SMA and then pushed past $44,000 during the ongoing session.

Bitcoin Price Chart Indicates BTC Could Drop Back To $44,000

The Bitcoin price started the previous weekend on a fairly bearish note, rising by 1.31% on Saturday and then dropping back on Sunday, falling to $37,944. Monday saw BTC recover, as the price rose by 1.42% and moved to $38,482, and then registered a marginal increase on Tuesday, moving to $38,769. The 20-day SMA acted as resistance at this level, and BTC fell back on Wednesday, dropping by nearly 5% to $36,986. 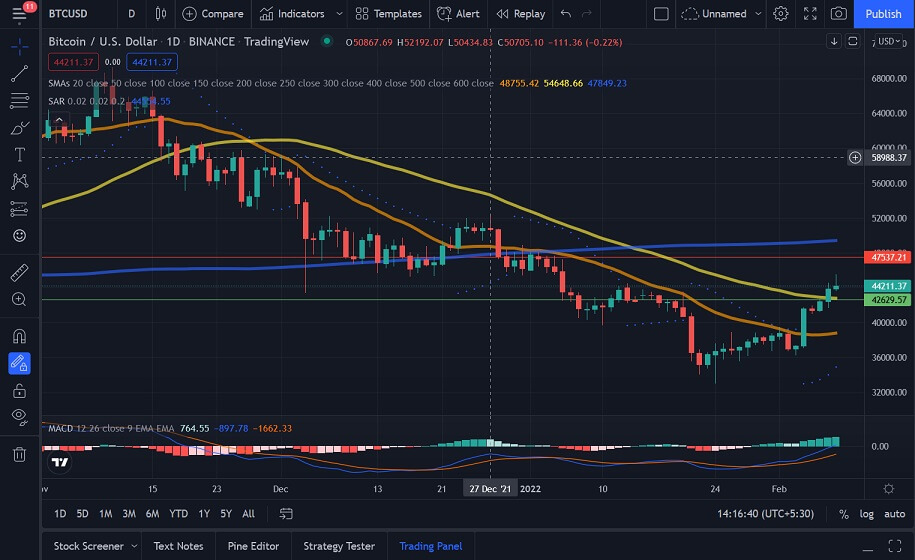 After dropping by nearly 5% on Wednesday, the Bitcoin price registered a marginal recovery on Friday, rising by 0.98%. Friday saw BTC surge by over 11%, as it pushed past the 20-day SMA and moved to $41,623. Despite the bullish sentiment, BTC registered a marginal drop on Saturday before recovering on Sunday and ending the weekend at $42,409. On Monday, BTC continued to push higher as the price moved past the 50-day SMA, rising to $43,886, before pushing past $44,000 during the current session.

IntoTheBlock’s IOMAP for the Bitcoin price shows us that BTC faces strong resistance at around $47,514. At this price level, over 1.8 million addresses have sold more than 1 million BTC. 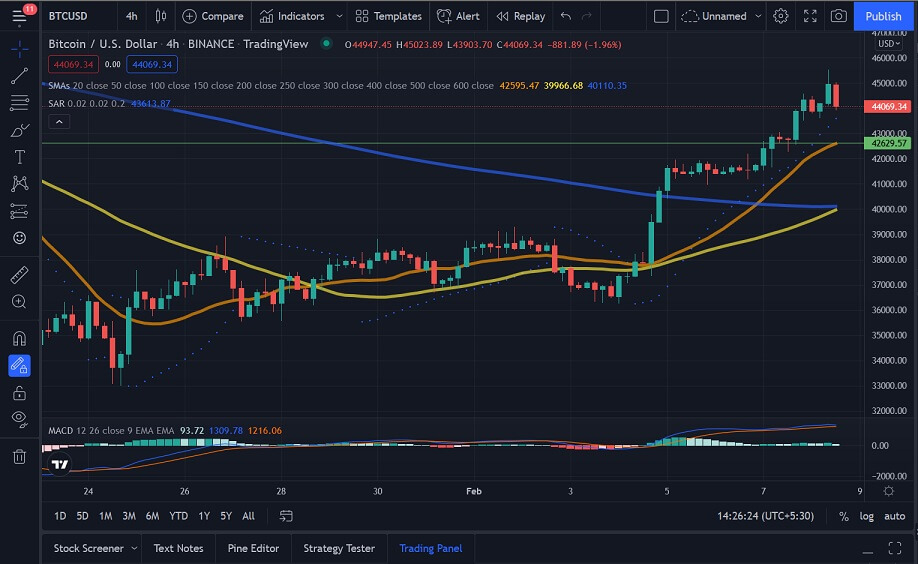 According to a Jan. 26 filing with the Securities and Exchange Commission, the investment vehicle will not offer direct exposure to Bitcoin, but at least 80% of its net assets will be through securities of companies that “derive at least 50% of their revenue or profits” from BTC mining or providing the hardware or software related to mining.

The filing added Valkyrie would invest up to 20% of the ETF’s net assets in companies holding “a significant portion of their net assets” in Bitcoin.

Valkyrie’s offering resembles the Digital Asset Mining ETF proposed by asset manager VanEck in December. The asset manager said it planned to invest 80% of its total assets in securities from crypto mining firms, with the SEC expected to reach a decision on the fund or extend the deadline by Feb. 14.

In October, Valkyrie became one of the first asset managers to offer indirect exposure to crypto through cash-settled contracts when it launched its Bitcoin Strategy ETF.

The SEC has not approved Bitcoin spot ETFs in the United States despite criticism from some lawmakers and industry leaders that the lack of regulatory clarity is holding the country back on the world stage regarding innovative investment vehicles.

Canadian giant accounting firm KPMG is the latest traditional company to make arrays into the cryptocurrency sector by adding Bitcoin and Ethereum to its corporate treasury.

In a press statement, KPMG stated that it acquired the assets through Gemini exchange execution and custody services. The incorporation marks the 150-year-old company’s first direct investment in digital currencies, with allocation also entailing carbon offsets as part of maintaining a net-zero carbon transaction in line with the firm’s environmental, social, and governance (ESG) obligations.

According to the accounting giant, the venture into crypto assets aligns with the belief that digital currencies will keep growing. Canada KPMG Managing Partner Benjie Thomas said:

“Cryptoassets are a maturing asset class. <…> This investment reflects our belief that institutional adoption of crypto assets and blockchain technology will continue to grow and become a regular part of the asset mix.”

The crypto investment followed a recommendation from KPMG’s governance committee that was tasked to offer oversight regarding the venture. The committee also focused on the tax and accounting implication of adding cryptocurrencies to the company’s corporate treasury.

On future investments, KPMG pointed out that it expects to focus on other crypto fields like Decentralized Finance (DeFi), Non-Fungible Tokens (NFTs), and the metaverse. The investments come after KPMG released a report indicating that Investments in blockchain and cryptocurrency in 2021 exceeded the total for the three previous years combined.

California-based superfood chain Everbowl has announced it is moving its business operations to a Bitcoin standard, in which it will be converting cash reserves into the flagship cryptocurrency. According to an announcement, Everbowl has conducted research and spoke with advisors about its options to move their treasury into BTC and run the company using a Bitcoin standard.

"We’ve concluded that running the business exclusively on cash isn’t the most advantageous, nor the safest, method of running a business in 2022 and beyond."

Fenster added that he understands it is “still early in terms of corporate adoption, as well as governmental adoption of Bitcoin.” The CEO added the firm plans to “make a contribution to this cause by leading with our example.”

He added that a “disruptive growth company should always position itself ahead of the pack and take the lead by adopting new technologies early rather than late.” To Fenster, the bitcoin standard will become the gold standard in the future.

As first reported by Bitcoin Magazine, Everbowl’s treasury strategy was altered in “light of the excessive debasement of the U.S. dollar coupled with a 39-year high inflation rate,” which saw the value of the cash within the firm erode “at an unsustainable rate.”

The CEO encouraged other business leaders to, at a minimum, do their research on Bitcoin. Further, the company plans on allowing its employees to get paid in the flagship cryptocurrency. Fenster added:

"While we understand it is not possible to convert 100% of our business operations to the Bitcoin Standard at this time, we will increase our adoption and conversion as more access points become available."

In 2021, the Nigerian Central bank prohibited banks from facilitating crypto transactions citing the need to protect the economy and investors. While many would believe that the ban would hamper the growth of crypto trading in the African country, Available data shows that Nigerians have subverted the ban through peer-to-peer (P2P) trades which grew by 16% within a year.

A cursory look at Nigeria’s P2P Bitcoin transaction volumes on crypto platforms like Paxful and Localbitcoins positions the country above others in the African region. Its volume is around $400 million worth of transactions. The closest country to its ranking is Kenya, with $160 million in trading volume, while South Africa is third with $117 million.

A more cursory look at the data would show that the market is currently experiencing a lull, which could be because of the wider crypto market crash that saw the value of digital assets plummet to new lows. P2P crypto platforms have become increasingly popular in Africa due to their ability to let users transact directly with each other without a central body.

Bitcoin and other digital currencies have gained traction in African countries largely due to the falling value of their national currency, alongside the debilitating effect of the coronavirus pandemic on the economy. Nigerians crypto adoption rose by over 20% in 2021, ranking the country higher than countries like Malaysia, Australia, and even the United States.

Looking at the Bitcoin price chart, we can see that BTC has been extremely bullish in recent sessions. However, the price has dropped back during the current session and has dropped to $44,100, although it remains in the green. If BTC continues to drop, we could see the BTC fall back below $44,000. However, if buyers retain the session, BTC could push towards $45,000.