The Bitcoin price was quite bearish at the start of the previous week as well, registering a marginal drop on Monday. The price registered a significant drop on Tuesday, falling by over 6%, slipping below the 20 and 50-bar SMAs and settling at $47,599. BTC’s bearish sentiment persisted on Wednesday as well, falling by 2.39% and settling at $46,459. Despite the bearish start to the week, BTC recovered on Thursday, rising by 1.50% and moving to $47,154. However, BTC was back in the red on Friday, falling to $46,197. 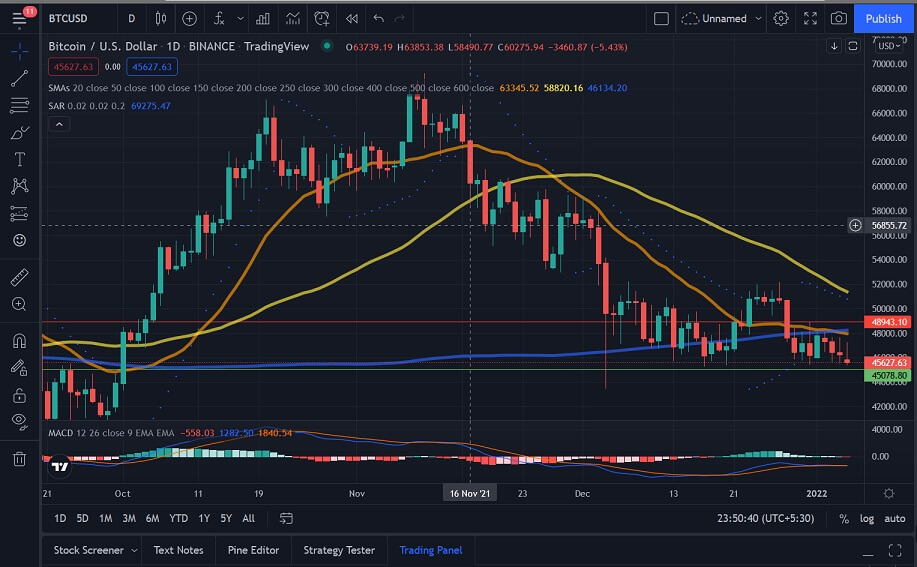 After falling to $46,197 on Friday, the Bitcoin price registered a significant increase on Saturday, as BTC rose by 3.46% and settled at $47,797. However, with the 200-day SMA acting as resistance, BTC fell back in the red on Sunday, dropping by 1%. BTC continued to drop on Monday, falling by nearly 2% and starting the week on a bearish note. The price continued to drop on Tuesday, falling to $46,243. The current session sees buyers and sellers struggling to control the session, with the price currently below $46,000.

Looking at IntoTheBlock’s IOMAP for the Bitcoin price, we can see that BTC faces strong resistance at around $48,977. At this price level, over 2 million addresses have sold more than 1.2 million BTC. 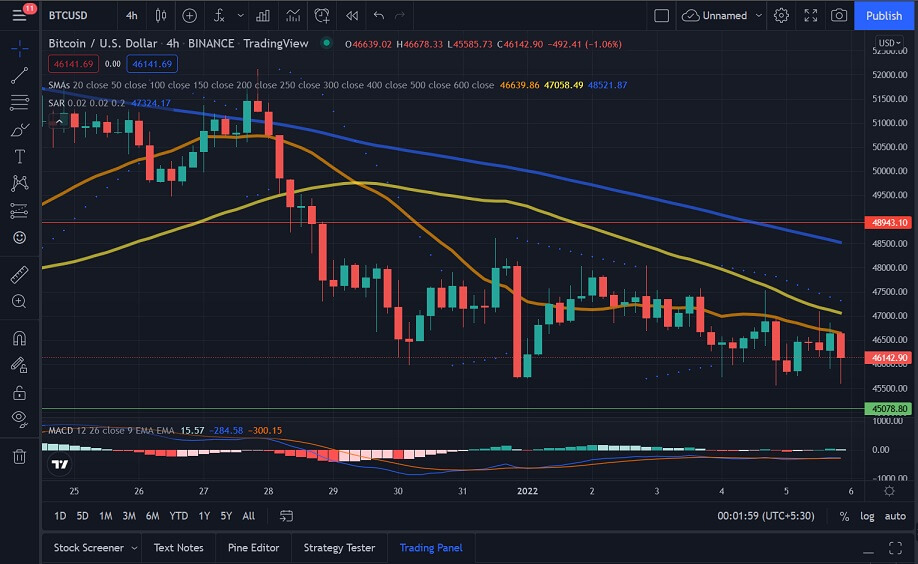 Bitcoin markets have been consolidating since the beginning of the year. But, on-chain metrics are painting a more positive picture as more of the asset is becoming illiquid. In a recent report, Glassnode delved into Bitcoin supply metrics to understand the longer-term macro trends.

The findings revealed that although the asset has been trading sideways so far this year, more BTC has become illiquid. There has been an acceleration in illiquid supply growth, comprising more than three quarters (76% of the total circulating supply).

Glassnode defines illiquidity as when BTC is moved to a wallet with no history of spending. Liquid supply BTC, which makes up 24% of the total, is in wallets that spend or trade regularly.

“We can see that over the final months of 2021, even as prices corrected, there has been an acceleration of coins from liquid, into illiquid wallets.”

The figures suggest that more Bitcoin is being transferred into storage, indicating increasing hodling habits and accumulation. The decline in highly liquid supply also hints that there may not be a sell-off or capitulation event at any time shortly.

The researchers concluded that these conditions indicate “divergence between what appears to be constructive on-chain supply dynamics, compared to bearish-to-neutral price action.”

In the same report, Glassnode stated that the total supply held by long-term holders has plateaued over the past month or so. This suggests that longer-term investors have stopped spending or selling coins and have become hodlers or even accumulators at this stage. “This provides another constructive view of market conviction,” it added.

Looking at the Bitcoin price chart, we can see that BTC has pushed up to $46,040 at the time of writing. However, if the bearish sentiment persists, BTC could drop to $45,500.