Bitcoin Price Prediction: BTC Could Slide Below $37,000 Thanks To Possible Profit Booking Of Weekend Gains

The Bitcoin price started the current week in the red, with crypto markets opening sluggishly during the week and most major cryptocurrencies trading in the red. BTC had pushed up by 0.86% on Thursday and then moved up by 1.60% on Friday, rising to $37,793. The weekend started with the positive sentiment persisting on Saturday, with BTC rising by 1.31% and moving to $38,286. However, the price fell back on Sunday, dropping by 0.89% and ending the weekend at $37,944. The current session sees BTC down by over 2%, as the price dips below $37,000. 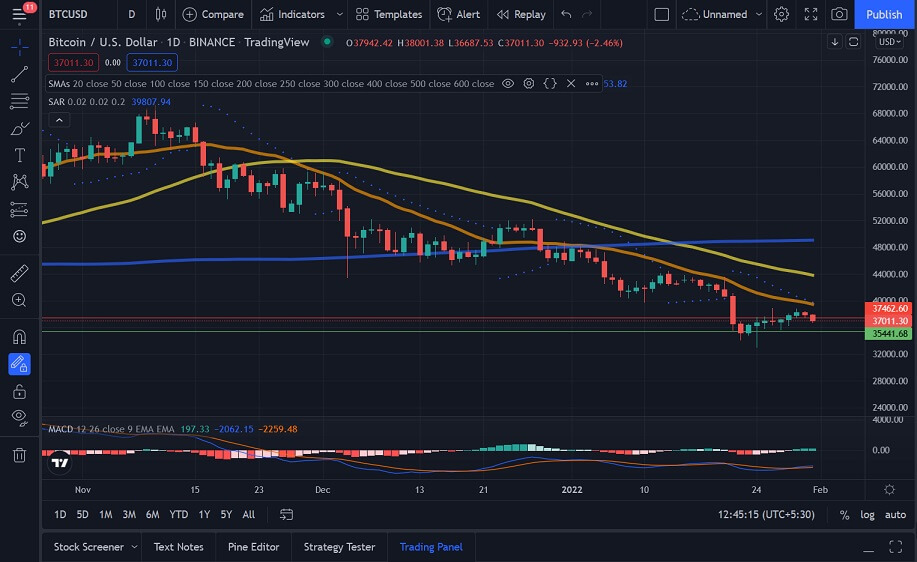 After registering a marginal drop on Wednesday, the Bitcoin price was back in the green on Thursday, as it rose by 0.86% and moved to $37,197. Friday saw BTC continue to push higher, as the price rose to $37,793 after an increase of 1.60%. The weekend saw the positive sentiment persist, as the price rose by 1.31% and moved past $38,000, rising to $38,286. However, BTC fell back after reaching this level, dropping by 0.89% on Sunday and ending the weekend at $37,944. The current session sees BTC just above $37,000, as sellers look to push the price lower. We can see that the MACD is still bullish, indicating that we could see the price recover from its current level.

Looking at IntoTheBlock’s IOMAP for the Bitcoin price, we can see that BTC faces strong resistance at around $37,477. At this price level, over 979,000 addresses have sold more than 729,000 BTC.

We can see that the Parabolic SAR is currently bullish, indicating that BTC could recover from its current level. 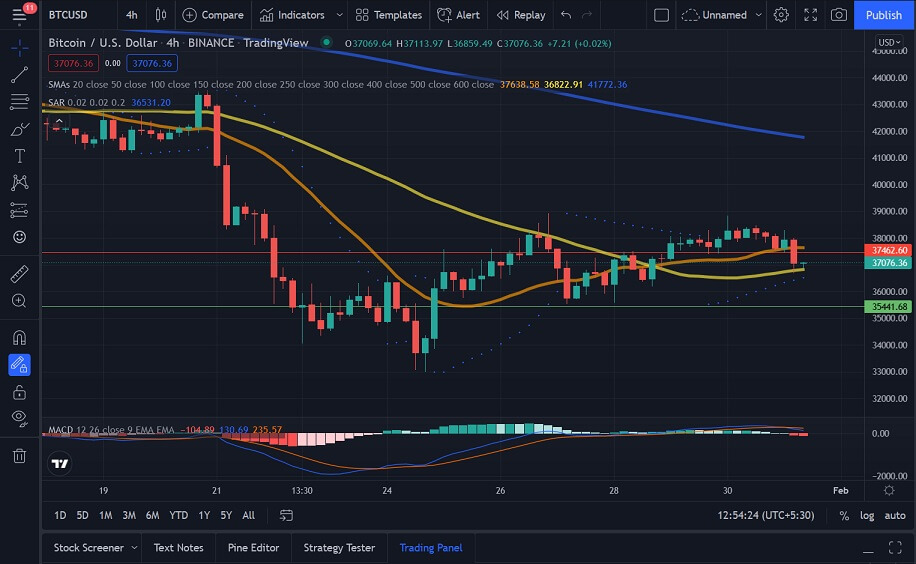 The Bitcoin whitepaper published by anonymous author Satoshi Nakamoto continues to be available in different languages as community members strive to spread the document’s contents to the masses. The whitepaper has been translated into 40 languages, with Nepali becoming the latest addition.

“I am hopeful that this translated copy will reach the wider community of my country Nepal. I am still hopeful that Nepal Government will support BTC very soon.”

Over the years, the document has been translated into other languages, including Chinese, Spanish, Italian, Russian, French, German, Bahasa Indonesian, and Swedish. Furthermore, the whitepaper is available in braille to help individuals with visual impairments. The translation is part of helping break the barrier of entry into Bitcoin targeting millions of people globally.

By eliminating the language barrier, people can better understand how Bitcoin technology works. Currently, the translation can be undertaken by any interested individuals who can submit a request through the Bitcoin.org Github page. Although the identity of Satoshi Nakamoto is not yet known, several individuals have come forward claiming to be the anonymous Bitcoin founder, with Australian computer scientist Craig Wright emerging as a notable figure.

Canadian Restaurant Is Expanding Across Ontario With The Help of Bitcoin

According to a report by Toronto Star, popular restaurant Tahini's is using Bitcoin profits to open new restaurants in Ontario, a stellar turnaround for an enterprise that was on the verge of collapse during the COVID-19 pandemic.

The report claims Tahini’s, owned by brothers Aly and Omar Hamam and their cousin Ahmed, saw their sales drop by 80% at the outset of the pandemic.

Aly called the moment “pretty terrifying,” and said the co-owners were working night and day to keep their three London locations open. The co-owners decided to invest all of their profits in Bitcoin in April 2020 as a way to stay afloat. According to Aly, the company is up more than 300% on their initial investment, which has paved the way for a fourth store in London, and five other locations in Ontario.

Aly said the company hopes to hit “20 to 25 locations” in Ontario by the end of 2022. The co-owners credited Bitcoin as seeing them through the pandemic and providing a safeguard against inflation.

"It’s really done its job of protecting us against inflation and it worked as we intended it to."

While Tahini’s does not currently accept digital assets as a form of payment, it continues to invest its profit into Bitcoin. Aly explained:

"We keep a working capital for about three to six months in cash, and then the rest all goes into Bitcoin. So, whenever we have an expansion, we’re not forced to sell our Bitcoin to fund that expansion. We try to operate conservatively, where we never have to sell our Bitcoin, and we just keep accumulating on our treasury.”

Looking at the Bitcoin price chart, we can see that BTC has dropped considerably over the past couple of sessions, with the price down over 2% during the ongoing session. We could see BTC drop to $37,000 if the current sentiment persists, but we could also see the price make a recovery after dropping to that level. If sellers manage to pierce $37,000, we could see BTC drop to $36,500.