Bitcoin Price Prediction: BTC Dips Back Below $42,000 As Death Cross Looms On The Horizon

The Bitcoin price fell back in the red during the current session, slipping below the $42,000 level once again after a weekend recovery. On Friday, BTC had registered a sharp fall, falling by 3.53% and settling at $41,603. However, the price recovered over the weekend, rising by 0.39% on Saturday and by 0.93% on Sunday to end the weekend at $42,158. However, BTC slipped back below $42,000 during the ongoing session, as buyers and sellers look to control the market. 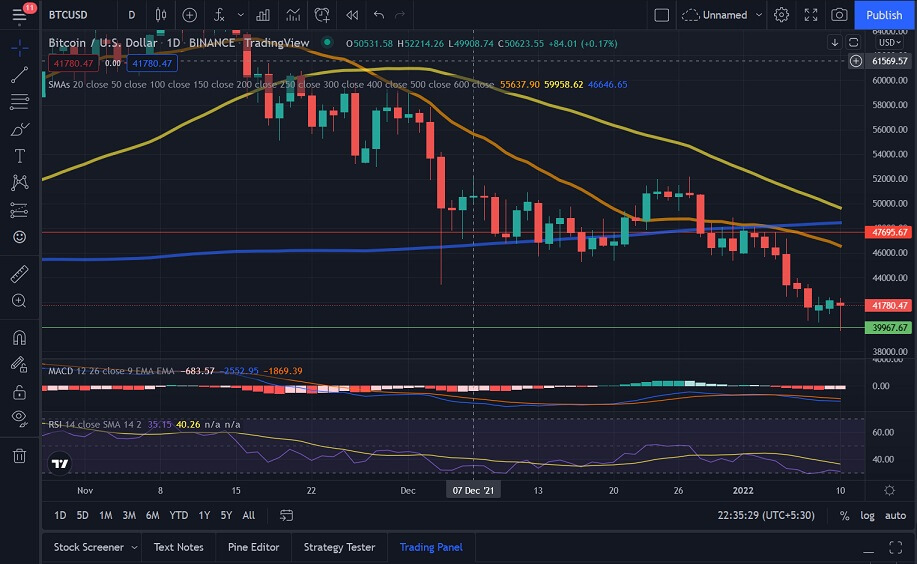 Looking at IntoTheblock’s IOMAP for the Bitcoin price, we can see that BTC faces strong resistance at around $47,708. At this price level, over 2 million addresses have sold more than 927,000 BTC.

We can see that the Parabolic SAR has flipped to bearish, indicating that the price could drop if BTC is unable to move past the 20-bar SMA. 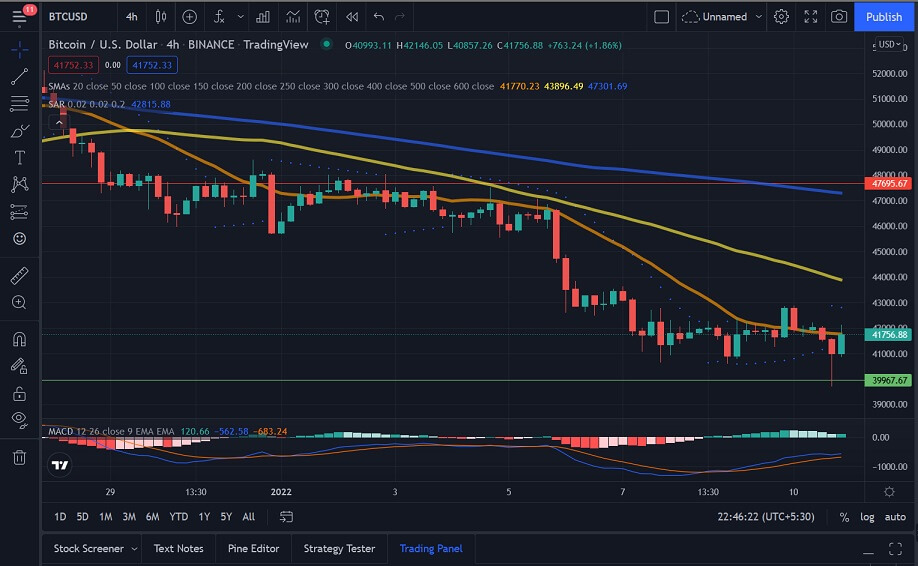 Real Vision chief executive Raoul Pal recently looked at the historical price action of e-commerce titan Amazon and compared it to the performance of Bitcoin (BTC) since 2013.

The former Goldman Sachs executive took to Twitter to note that Amazon (AMZN) adhered to Metcalfe’s Law, which states that a network grows in value as the number of users gets bigger. Pal highlighted that back in the early 2000s, Amazon was a highly volatile stock with drawdowns as deep as 50%. 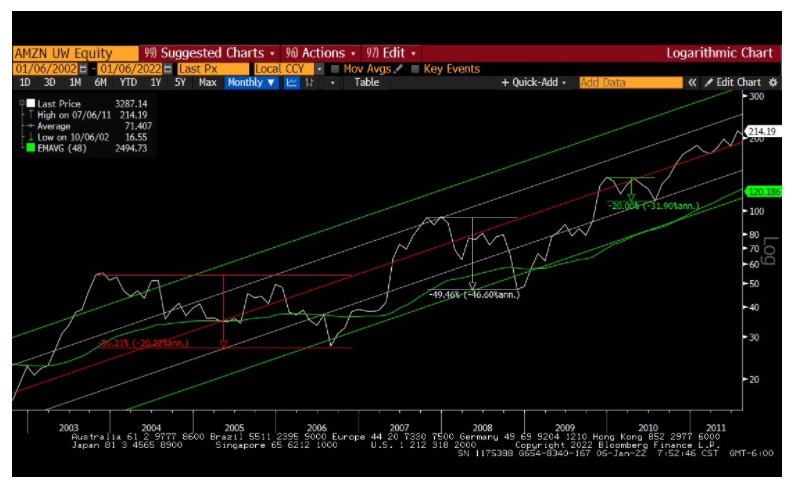 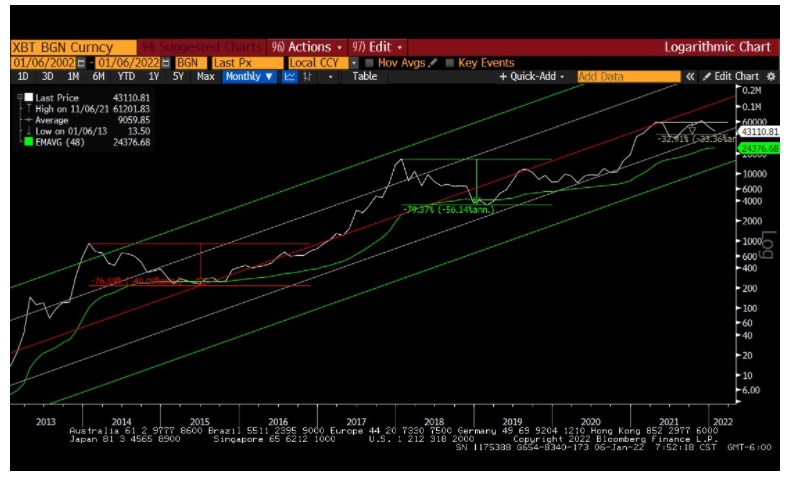 Pal also looked at the market structure of Amazon in 2010, which he said closely resembles the price action of Bitcoin in the last 12 months or so. According to the macro guru, if Bitcoin is to follow Amazon’s price action in 2010, the leading cryptocurrency could revisit crucial support at $30,000.

“It suggests BTC might even possibly test $30,000 but I doubt it (I think the sell-off is near done). but who the hell knows! It’s similar enough for context but never rely on fractals. They are for context only. The BTC fractal is longer in time than AMZN and more volatile. In the end, it’s all noise. The log chart is the truth and that is in itself an approximation of Metcalfe’s Law. If it isn’t noise to you, your position is too big for your time horizon.”

Pal also added that based on Metcalfe’s Law, Bitcoin’s value should be hovering around $100,000, suggesting that BTC is tremendously undervalued currently.

“BTC is cheap vs Metcalfe’s Law….(and has been for a long time – my guess is because there is less network applications on BTC currently than ML [Metcalfe’s Law] would prefer).”

Bitcoin Foundation chairman and billionaire investor Brock Pierce recently said that one catalyst could take Bitcoin’s price to $200K this year. Speaking in a recent interview with Fox Business, Pierce mentioned that he was mostly focused on external influences shaping the price of Bitcoin and the crypto markets.

He alluded to governments around the world printing a “massive amount of currencies” and the continued impact it would have on inflation as one particular price driver. According to Pierce, the price volatility of Bitcoin offers outsized returns for investors and could continue to catalyze the digital asset’s price growth.

As reported by The Daily Hodl, Pierce said:

"Remember this is an alternative asset and It’s really one that isn’t a hedge per se as gold or real estate maybe or more so because it has more risk and greater volatility, but also a much more interesting return profile."

Pierce told the host that financial uncertainty in the context of a broader global financial system would be the “primary driver” for Bitcoin’s price growth. He also mentioned that it was highly likely that Bitcoin could breach the six-digit mark in 2022, even going as high as $200K before falling back again.

A legal framework designed to prioritize transparency, safety, and auditability of crypto exchange platforms, will be delivered to the Turkish Parliament in the weeks ahead. A secondary priority of the framework is to create an appropriate financial environment for the growth of blockchain businesses.

This does not include an alleged 40% tax, according to Mustafa Elitas, a parliamentary leader of the ruling Justice and Development Party (AKP). Elitas tweeted earlier that the impending law will be “aimed at regulating the [local cryptocurrency] system, preventing malicious acts, protecting investors and countering grievances.”

Following a meeting of 13 crypto executives and senior government and financial sector officials, Elitas said those who attended would prefer a skeleton framework to facilitate quick amendments in a fast-paced industry. Parliament will have the ultimate say in any proposed regulation, according to Elitas. The government wants to establish a central custodian bank to remove counterparty risk.

Turkey has nearly five million accounts on crypto platforms. The Financial Crimes Board (MASAK) recently fined Binance, or BN Teknoloji, nearly $634000. Binance is the largest cryptocurrency exchange in Turkey by daily trading volume. In response, Binance Turkey said that it “openly’ communicates and cooperates with regulatory and supervisory authorities, and strives to ‘create a sustainable, healthy and safe ecosystem."

Over 30 cryptocurrency platforms are based in Turkey. On December 21, 2021, the number of trades exceeded one million, following the Lira’s devaluation.

Looking at the Bitcoin price chart, we can see that BTC has fallen back in the red during the current session. If the current bearish sentiment persists, we could see BTC drop to $41,500 or even $41,000.