Bitcoin Price Prediction: BTC Drops Back Below $49,000 During Ongoing Session

The Bitcoin price fell back during the ongoing session, as the price dropped below $49,000 with sellers looking to control the market. BTC had started the week on a highly bearish note, dropping by over 6% and settling at $46,885, slipping below the 200-day SMA. On Tuesday, the price managed to push back, rising by over 3% and settling at $48,409, before another increase on Wednesday saw the price rise to $49,139.

The Bitcoin price started the previous week on a fairly positive note, rising by just over 2%. A marginal increase of 0.17% saw BTC move to $50,623 on Tuesday before the price fell back in the red on Wednesday, registering a marginal drop of 0.18%. However, the price fell back drastically on Thursday, as it fell by almost 6%, dropping to $47,587 before another drop on Friday took BTC down to $47,298. 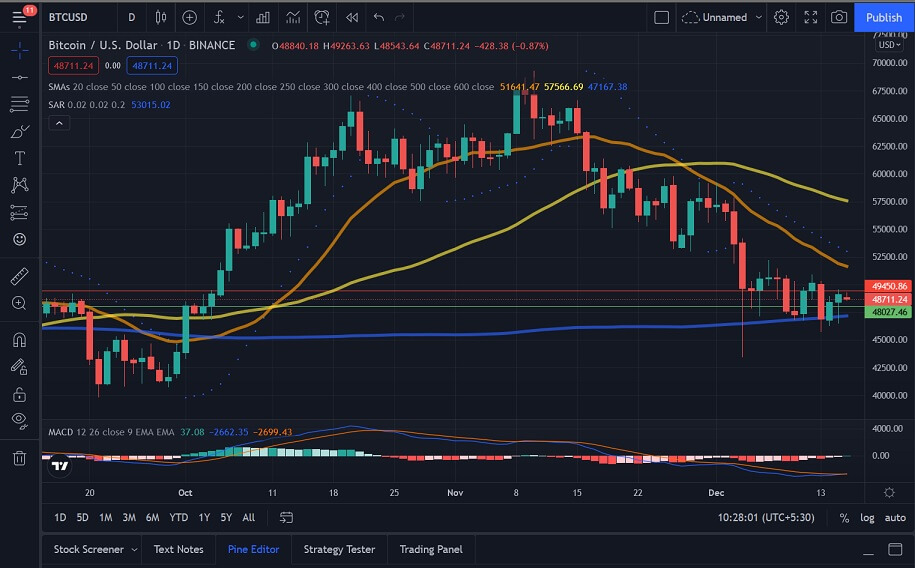 We can see that the MACD has just flipped to bullish, indicating that we could see the price rise.

Looking at IntoTheBlock’s IOMAP for the Bitcoin price, we can see that BTC has strong support at around $48,032. At this price level, over 2 million addresses have bought more than 978,000 BTC. 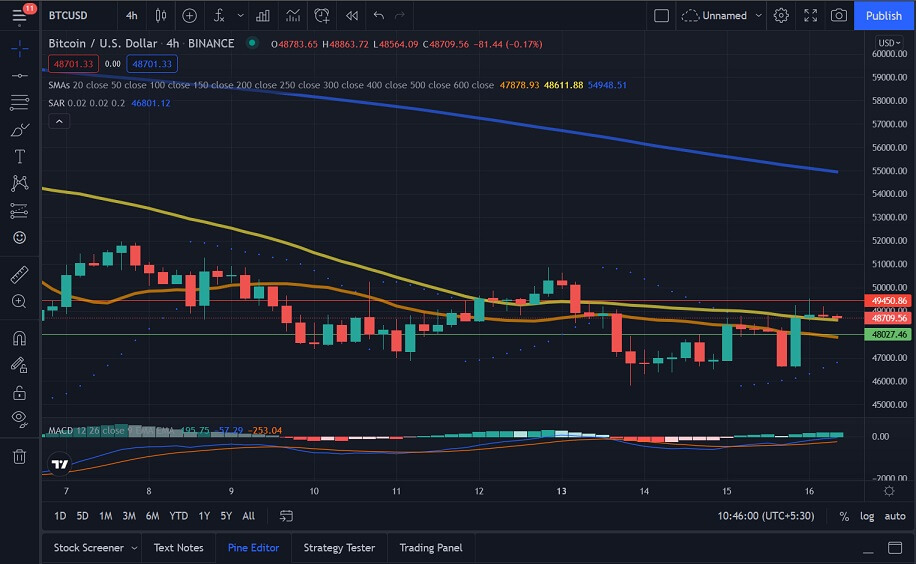 The New York-based Bitcoin firm NYDIG revealed it had closed a $1 billion funding round led by WestCap today. NYDIG is the crypto subsidiary of Stone Ridge, a fund with over $10 billion in assets under management.

“Our roster of partnerships and strategic investors lays the foundation for NYDIG to become the leading provider of Bitcoin solutions for businesses in any industry, and this new equity capital will further accelerate progress towards making this exciting network accessible and useful to all.”

NYDIG previously raised $200 million in a March funding round. The $1 billion sum puts the firm’s valuation at $7 billion. In a press release, NYDIG reported that it would use the newly-raised capital to develop new institutional software services around Bitcoin. The note details how it plans to design products that incorporate smart contracts, asset tokenization, and payments on Bitcoin’s Lightning Network. The funds will also be used to make new hires.

NYDIG is a key player in the Bitcoin services market, allowing institutions to gain exposure to the top cryptocurrency in a fully regulated manner. The firm offers a proprietary full-stack solution for corporations, banks, and high net worth investors. Notably, it does not operate a retail business.

BlockTo Allow Users To Gift BTC For The Holidays

According to a recent tweet, Cash App said its users (roughly 40 million active monthly) could send as little as $1 in Bitcoin or stock as a gift in the same way they had been sending cash. The payments firm has joined PayPal and Coinbase to allow users to send crypto as payments or gifts to third parties.

"With Cash App, you can now send as little as $1 in stock or bitcoin. It’s as easy as sending cash, and you don't need to own stock or bitcoin to gift it. So this holiday season, forget the scented candles or novelty beach towel, and help your cousin start investing."

Per earlier reports, a study by lending firm BlockFi showed many Americans would be willing to accept cryptocurrencies, including BTC, Ether, and Dogecoin, as gifts this holiday season. However, the same survey revealed that most respondents did not have the skills to transfer crypto. Many critics have attributed sending BTC to newbies as part of why so many coins have been lost since 2009.

Other projects accept donations in crypto over the holidays to help those in need. Fintech provider Unbanked announced earlier this month it would be enabling crypto donations for Toys for Tots, a program run by the US Marine Corps that collects toys to distribute to disadvantaged children. In addition, platforms such as the Giving Block allow nonprofit organizations and charities to accept donations in crypto.

Six senators have requested that the Us Treasury rapidly engage in rulemaking concerning a bill passed earlier. In November, the Biden administration passed into law the Infrastructure Investment and Jobs Act (IIJA). The bill imposed transaction reporting requirements on crypto companies and protocols alike.

At the time, it attracted criticism over concerns around the term “brokers” and the requirements that would pertain to them. That term was defined broadly enough to apply to crypto exchanges, mining firms, wallet companies, and others that do not directly handle crypto transactions.

These concerns were reiterated in a letter published recently by various senators. One part of that letter reads:

"Some market participants have expressed concern that an overly-broad interpretation of … ‘broker’ could capture certain individuals who are solely involved with [validating transactions] and entities solely providing software or hardware solutions enabling users to maintain custody of their digital asset wallets."

The authors insisted that the law should have an appropriate scope and urged the US Treasury to engage in rulemaking under the Administrative Procedure Act (APA) “in an expedited manner.” They also urged the Treasury to issue informal guidance before the end of 2021.

The letter is signed by six senators from both sides of the political aisle: Senators Rob Portman (R-OH), Mark R. Warner (D-VA), Mike Crapo (R-ID), Kyrsten Sinema (D-AZ), Pat Toomey (R-PA), and Cynthia Lummis (R-WY). Some of those senators were behind attempts to modify the bill through an amendment as early as August. Those amendments would have narrowed the definition of “brokerage” to include crypto exchanges and similar companies.

Looking at the Bitcoin price chart, BTC has dropped marginally during the ongoing session. If sellers manage to retain control, we could see the price drop to $48,000. However, if the price recovers, BTC could move to $49,000.