The Bitcoin price started the week on a positive note, registering an increase of nearly 2% during the ongoing session as buyers look to push the price higher. BTC had reported a fairly strong increase on Thursday, rising by almost 3%, and then pushed up by 2.51% on Friday to settle at $39,234. However, the price fell back in the red over the weekend, registering a marginal drop on Saturday and then falling by nearly 4% on Sunday, ending the weekend at $37,739 before recovering during the ongoing session.

Bitcoin Price Chart Indicates BTC Looking To Push Back Above $39,000

The Bitcoin price got off to a slow start to the previous weekend, registering a marginal increase of 0.25% on Saturday. The price continued to drop on Sunday, falling by over 4% and settling at $38,382. Monday saw BTC remain in the red, as the price dropped by over 3%, dropping to $37,054. However, the price made a strong recovery on Tuesday, pushing up by over 3% and moving to $38,262 before dropping back on Wednesday, falling by 2.61% and settling at $37,263. 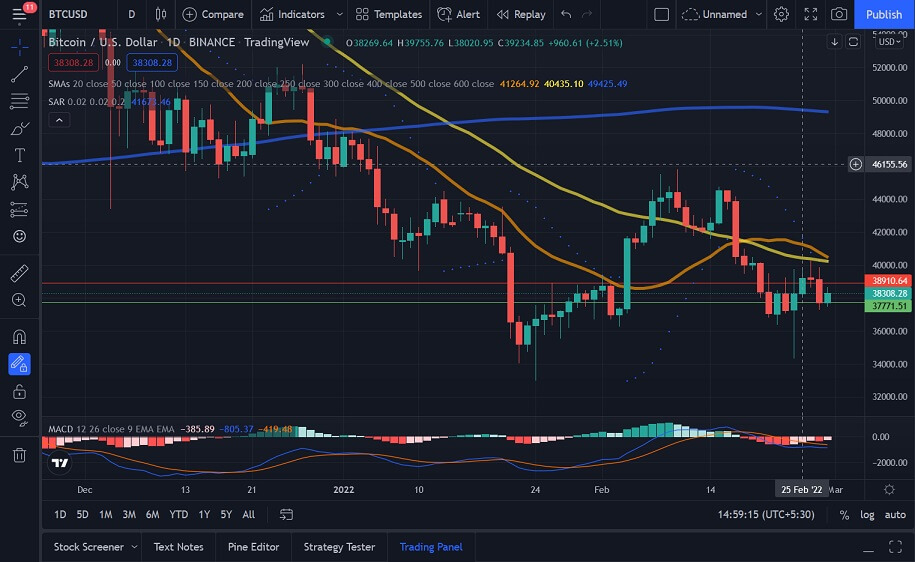 The Bitcoin price registered a strong recovery on Thursday, as BTC rose by nearly 3% and moved to $38,274. Friday saw BTC remain in the green, as the price rose by 2.51% to $39.234. Despite the bullish sentiment, the weekend saw BTC back in the red, as the price registered a marginal drop on Saturday before falling by nearly 4% on Sunday to end the weekend at $37,739. The current session sees BTC back in the green as buyers look to push the price towards $39,000.

We can see that the MACD is currently bearish, but if BTC can push towards the resistance at around $39,000, we could see it flip to bullish.

More On Bitcoin: You Asked: What If I Invest $10 In Bitcoin?

We can see that the MACD and Parabolic SAR are bearish, indicating a price drop. However, if BTC can recover, we could see them flip to bullish. 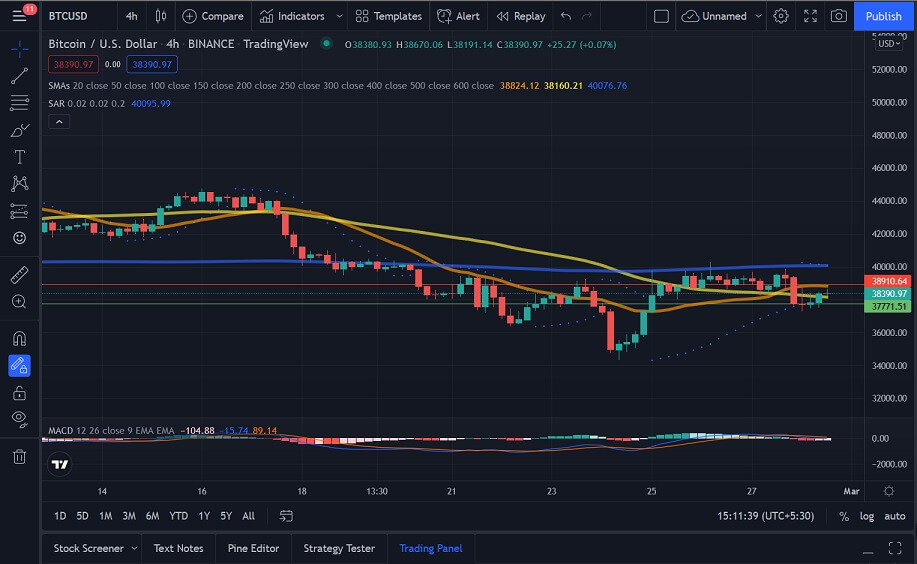 Mykhailo Fedorov, vice prime minister and minister of digital transformation of Ukraine, has called on crypto exchanges to freeze the accounts of both Russian and Belarusian users. Fedorov posted the plea on Twitter following several days of intense fighting in Ukraine after Russian forces invaded the country late last week.

“I’m asking all major crypto exchanges to block addresses of Russian users. It’s crucial to freeze not only the addresses linked to Russian and Belarusian politicians, but also to sabotage ordinary users.”

Jesse Powell, CEO of Kraken, one of the world’s largest exchanges, responded that such a move could not be taken “without a legal requirement to do so,” but he added that Russian users should be aware that such an order “could be imminent.”

In a later tweet, Fedorov praised a move by NFT platform DMarket to freeze accounts belonging to customers in Russia and Belarus. DMarket confirmed this on Twitter, stating that assets remain in users’ accounts but that their access has been limited.

The Russian rouble plunged to a record low recently, sparking fears of a bank run in the country. Meanwhile, more than $10m in bitcoin, ether, and USDT has been donated to the Ukrainian government since its official Twitter account posted an appeal for support on February 26.

Crypto Donations for Ukraine Near $30 Million Mark as Support Continues

Ukraine continues to record a significant inflow of crypto donations, with the value approaching the $30 million mark, currently standing at $27.2 million as more well-wishers express support amid the ongoing Russian invasion. Data provided by blockchain analytics firm Elliptic indicates that the Ukrainian government and NGOs have raised over $17.2 million in crypto donations.

Crypto exchange Binance is also leading a $10 million emergency fund towards supporting Ukrainians impacted by the war, bringing the total confirmed donations to $27.2 million. According to Binance CEO Changpeng Zhao, the company is donating $10 million towards humanitarian initiatives.

The donations are targeting various entities, including non-governmental organizations and government entities, for courses including military support and humanitarian initiatives. Worth noting is that the donations are still ongoing at a value that might be higher than $27.2 million in crypto.

Elsewhere, Ethereum co-founder Vitalik Buterin is among individuals who have been pushing for crypto donations in support of several humanitarian initiatives. Most donations are mainly in Bitcoin, Ethereum, and US Dollar stablecoins. Furthermore, the government has been receiving donations in the form of non-fungible tokens. The use of crypto in donations has demonstrated the sector’s ability to facilitate quick, cross-border funds transfer, which bypasses financial institutions.

Per previous reports, Bitcoin donations into Ukraine began piling up when Russia threatened to proceed with the invasion on February 8. The donations were mainly led by Ukrainian volunteers and hacking groups who have been at the forefront to condemn Russia’s activity.

Cash Transactions Are Almost Dead In Ukraine As Bitcoin, Ether, USDT Come To The Rescue

Ukrainian citizens were on the short end of the stick as the country’s central bank ordered the suspension of the issuance of e-money to electronic wallets. The Ukrainian Central Bank clarified that the term e-money applies to fiat currencies typically held on platforms like Paypal and Venmo.

The decision to restrict fiat transactions on citizens is in line with the imposition of martial law in response to Russia’s invasion. According to a statement released by the bank, access to the foreign exchange markets has been limited and a cap on cash withdrawals has been imposed. The nail on the coffin was the ban on issuing foreign currency from retail bank accounts.

As the restrictions have adverse effects on the lives of Ukrainians, a large number of citizens are turning to cryptocurrencies as an answer. According to the local cryptocurrency exchange, Kuna, there has been a spike in the Tether’s USDT usage amongst the local population. Kuna’s CEO, Michael Chobanian told journalists that trust for the banking system and the local currency is low at the moment.

“The majority of the people have nothing else to choose apart from crypto.”

The preference for USDT and other stablecoins is due to the swinging volatility that has plagued the wider cryptocurrency markets. Bitcoin, Ethereum, and other altcoins recorded double-digit losses last week and stablecoins over a semblance of stability for the war-torn nations.

Global hiring firm Deel released its “State of Global Hiring 2021” report, revealing that freelancing in Latin America is massively increasing, with more people choosing to accept parts of their paycheck in cryptocurrency.

The report revealed that Argentinians and Latin America are increasingly focusing their hiring strategies on international companies and jobs. The changes in the working industry are attributed most likely to the decline of local economies and the after-effects of the pandemic.

As the report continues to explain, Argentina stands out in the region, as there has been a significant increase in workers’ wages – with 21% more working in the marketing, products, and sales sector over the last six months.

With the increasing volume of freelance work, the report also indicated a similar pattern of the number of workers who receive part of their paychecks in cryptocurrency. Specifically, workers choose to receive their payments in either Bitcoin (BTC) or Ethereum (ETH), with 90% of crypto payments to the region falling under the two categories.

Latin America has emerged as one of the fastest regions adopting Bitcoin and other digital assets, primarily because of the increasing demand to increase the financial inclusion rates of its citizens and promote financial stability.

“We are seeing an increase in cryptocurrency withdrawals, in countries like Argentina. We currently offer withdrawals in BTC -the most popular in Latin America-ETH, USDC, and SOL through Coinbase.”

More On Bitcoin: Best Methods On How To Earn Bitcoins Fast

Looking at the Bitcoin price chart, we can see that BTC has made a fairly positive start to the week. If the current sentiment persists, we could see BTV push towards the resistance at around $39,000 and look to move past it.

Is Bitcoin (BTC) a Good Buy?

How to Short-Sell Bitcoin