The Bitcoin price was quite bullish towards the start of the previous week, with the price registering a marginal increase on Saturday (6th). On Sunday, BTC pushed up by over 3%, ending the weekend above the 20-day SMA at $63,683. Monday saw a significant push, as BTC rose by over 6%, pushing up to $67,541. However, after reaching this level, the price fell into the red on Tuesday, registering a marginal drop, before falling by over 3% on Wednesday to settle at $65,080. 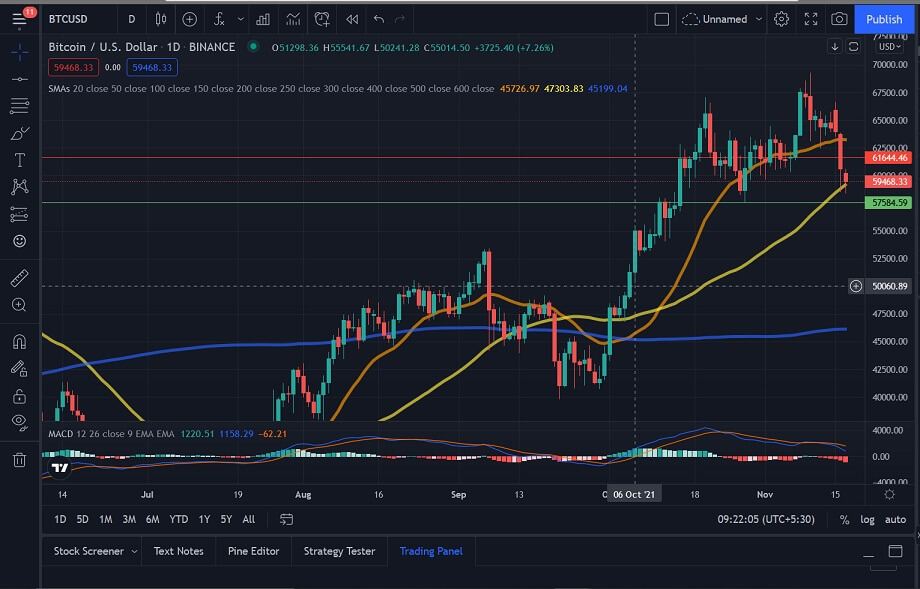 The Bitcoin price posted a marginal recovery on Thursday, as it rose by 0.50%, before dropping on Friday and settling at $64,396. The weekend saw a marginal recovery on Saturday as BTC pushed up to $64,742 before dropping to 464,302 on Sunday. The bearish sentiment persisted during the current week as BTC dropped to $63,957 on Monday. Tuesday saw BTC slip below the 20-day SMA and settle at $60,628, a drop of over 5%. The current session sees BTC continue to drop as sellers look to push the price below $59,000.

Looking at IntoTheBlock’s IOMAP for the Bitcoin price, we can see that BTC faces strong resistance at around $61,644. At this price level, over 1.5 million addresses have sold over 890,000 BTC.

We can see that the Parabolic SAR and MACD are both bearish, which is indicative of a further price drop during the current session. 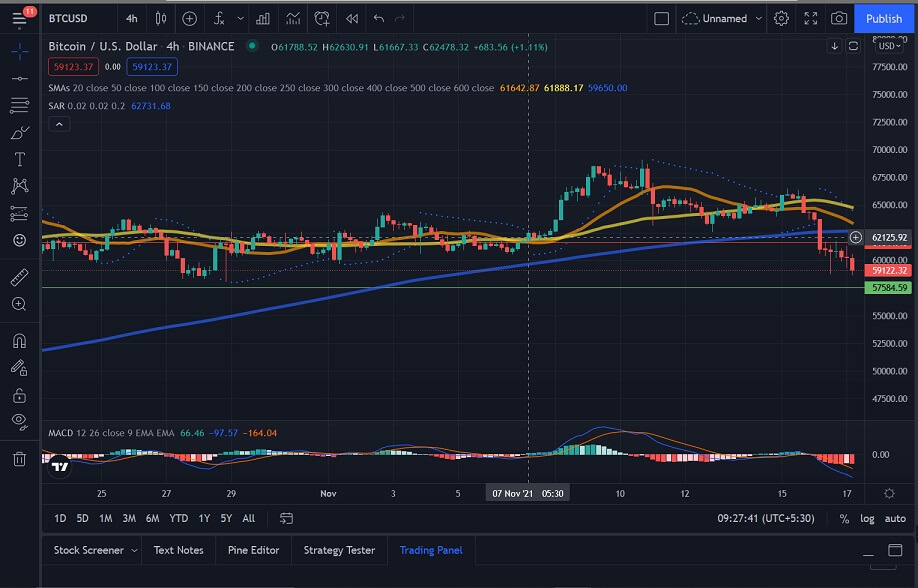 Bitcoin instruments represented 64.6% of the $150.9 million that flowed into digital asset investment products last week. While the record AUM coincided with BTC establishing a new all-time high of roughly $69,000 on November 10th, the markets have since pulled back by around 10%.

Despite CoinShares noting that digital asset investment products have seen inflows for 13 consecutive weeks, the sector has posted “subdued volumes” during the latter half of 2021. According to the report, daily volumes have averaged $750 million during the second half of the year, a 22% retracement compared to $960 million during H1 2021.

While Ethereum saw the strongest weekly inflows among altcoin-tracking products with $17.3 million, the figure marked a 44% decline week-over-week for the asset class. Despite volume drying up, CoinShares reports a record AUM of $21 billion for Ethereum products while the price of ETH posted record highs near $4,900 on November 10th.

Cardano (ADA) ranked as a close second, taking in $16.4 million to post a 227% increase in weekly inflows. CoinShares said it could not “identify a discernible catalyst” driving the surging investment into Cardano funds.

Institutional traders have locked a record sum of capital into Bitcoin investment products despite trade volume declining during the second half of 2021.

The Bitcoin price chart shows us that BTC has been quite bearish during the current week, with the price registering a sharp drop on Tuesday. If the current sentiment persists, we could see BTC drop below $59,000.