The Bitcoin price has dropped during the ongoing session, as sellers look to push BTC to $47,000 again. BTC had registered a marginal drop on Wednesday before recovering, registering a marginal increase on Thursday. On Friday, the price fell back in the red, dropping by over 2% and settling at $46,228. However, Saturday saw BTC back in the green, as it rose by over 3% and moved to $47,829 before dropping during the ongoing session.

The Bitcoin price did not show much movement during the previous weekend, registering a marginal drop on Friday. The price dropped on Saturday before another marginal increase on Sunday saw the price settle at $50,858. A marginal increase on Monday saw BTC push above $51,000. However, BTC registered a sharp fall on Tuesday, dropping by nearly 7%, slipping below the 20 and 200-day SMAs and settling at $47,646. Wednesday saw BTC continue to drop, falling by 0.77% and settling at $47,280. 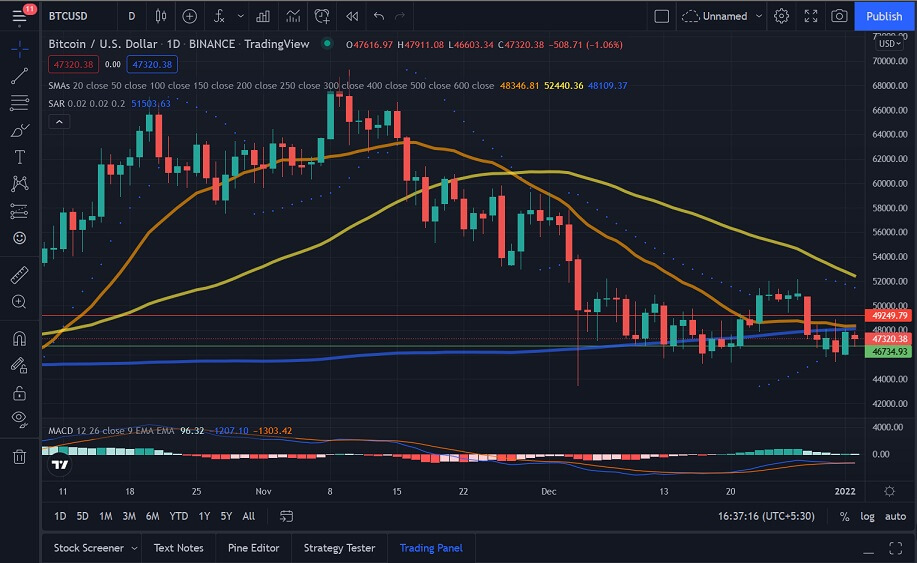 We can see that the Parabolic SAR is currently bearish, indicating that BTC could drop further.

We can see that the MACD is currently bullish, indicating that BTC could rise higher. However, if the price drops, we could see it flip to bearish. 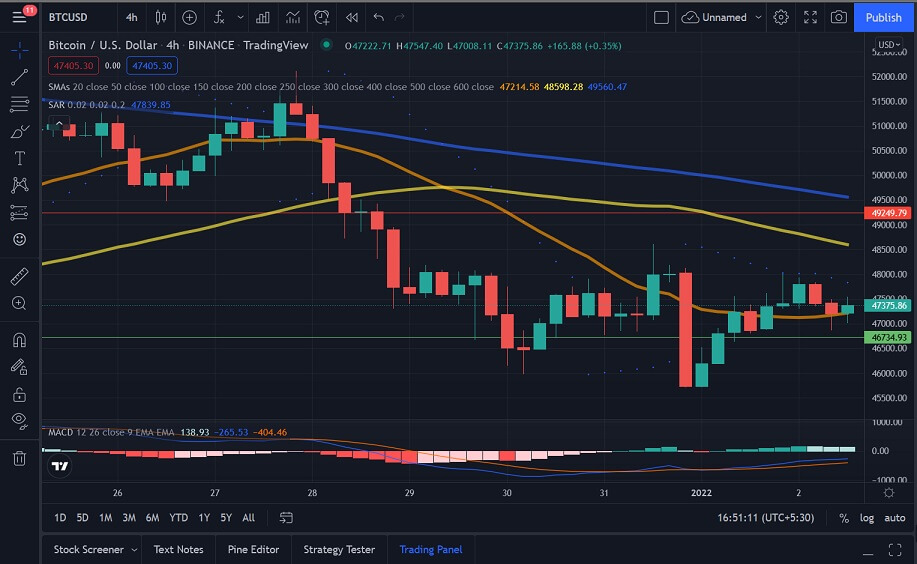 As a result of Bitcoin’s decline from its all-time high of around $69,000 in November 2021, many investors are unsure about which route the flagship digital currency will go next, leading to a mixed mood in the market.

According to data compiled by Finbold, the price of Bitcoin was up 46.44% year over year (YoY) on January 1, 2022, when compared to the price on the same day a year ago, as per CoinMarketCap statistics.

Although Bitcoin is failing to trade above the critical $50,000 level as we start the new year, the cryptocurrency community thinks that the asset will be worth more than its current price.

With over 110,000 votes, the cryptocurrency community at CoinMarketCap.com, which has a historical accuracy percentage of 90.75% in forecasting Bitcoin’s price, has predicted that the flagship digital currency will trade at about $52,600 by the end of January 2022.

Despite Bitcoin’s rocky finish to the year, investors anticipate that prices will rebound and finally hit new highs shortly. The recent oscillations in the market, on the other hand, signal that the price may go either way.

Looking at the Bitcoin price chart, we can see that BTC has dropped during the ongoing session. If sellers can retain the current session, we could see BTC drop to $47,000. However, if the price recovers, we could see BTC push to $48,000.