Bitcoin Price Prediction: BTC Looks To Push Back Above $43,000

The Bitcoin price managed to reverse the recent bearish trend, managing to register a marginal recovery during the ongoing session. BTC has been relatively bearish in recent sessions and had dropped by 2.06% on Thursday, falling to $43.519. BTC continued to drop on Friday, dropping by 2.55% and slipping below the 50-day SMA, before registering another marginal drop on Saturday to start the weekend on a bearish note. The current session sees BTC register a marginal increase, as it moved back above the 50-day SMA.

Bitcoin Price Chart Indicates BTC Could Push Back Above $43,000

The Bitcoin price was extremely bullish over the previous weekend and had registered an increase of over 11% on Friday, surging past the 20-day SMA and moving to $41,623. The price fell back marginally on Saturday before recovering on Sunday, rising by over 2% and ending the weekend at $42,409. Monday saw BTC continue to push higher, as it rose above the 50-day SMA and pushed up to $43,887. Tuesday and Wednesday saw BTC continue to remain in the green, rising by 0.52% and 0.72%, respectively, and rising to $44,434. 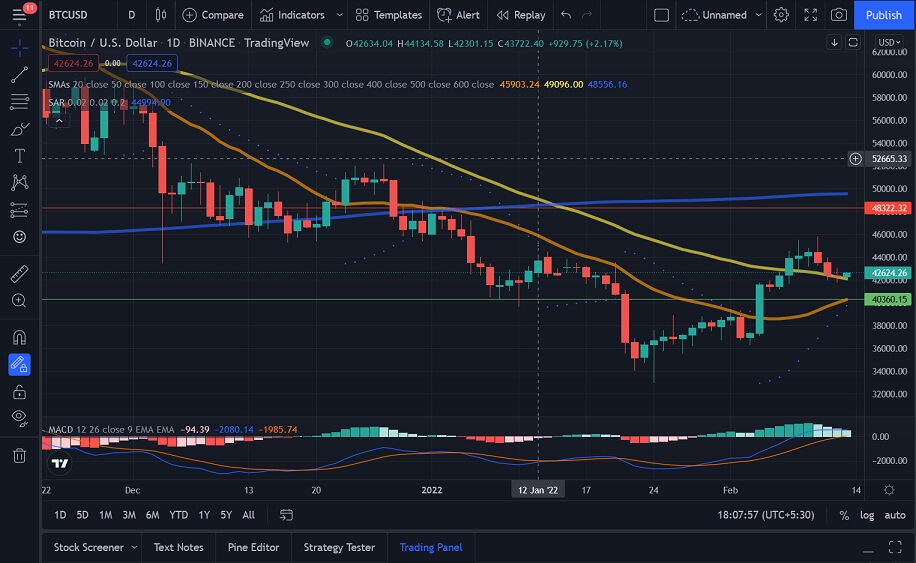 IntoTheBlock’s IOMAP for the Bitcoin price shows us that BTC faces strong resistance at around $48,434. At this price level, over 2 million addresses have sold more than 1 million BTC.

We can see that the Parabolic SAR and MACD are bearish, but if BTC can push past the $43,000 level, we could see them flip to bullish. 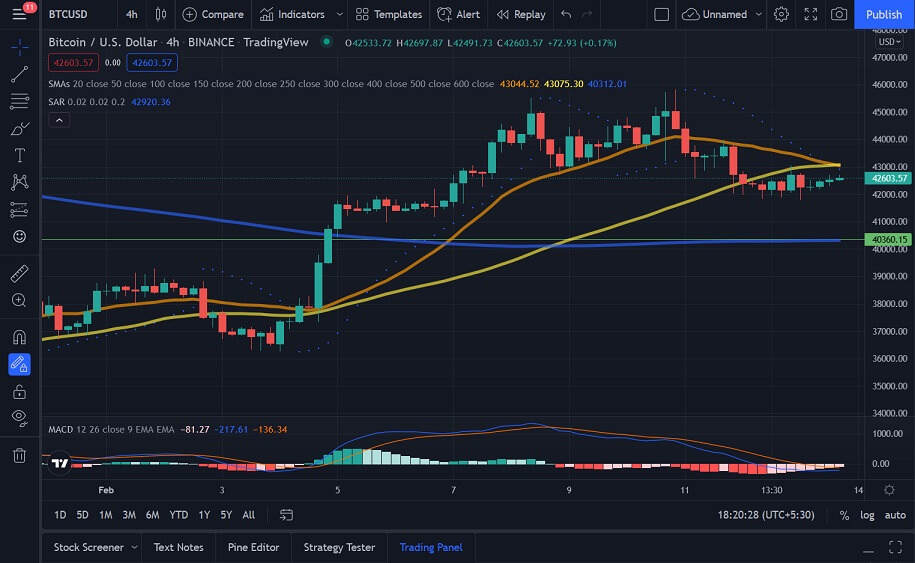 Bitcoin leaped with relief over the past week, showing all the signs of a firm determination to conquer new price heights. It received a significant bolster upon the news of Tesla’s financial reporting, which revealed the global EV manufacturer had close to $2 billion worth of Bitcoins in its coffers.

Tesla had reported this amount in its recent form 10-K filing with the US Securities and Exchange Commission, giving a breakdown of how it had gained an extra $500 million from its initial purchase of $1.5 billion during the year.

Its balance sheet revealed that the company still maintains the historical value of its BTC holdings. A total of $101 million were written off as impairment losses, and it reported total gains to the tune of $128 million, leaving a net gain balance of $27 million.

Back in May, Tesla CEO Elon Musk dragged the BTC market to a standstill after cutting off plans for the company to accept BTC as payment for Tesla vehicles. The announcement, which Musk claimed was borne out of genuine environmental concerns, sent BTC spiraling down to $30,000 historical resistance.

The company had added that it would look into adopting any other cryptocurrency with a <1% energy consumption rate but is yet to make its choice. Last month, Tesla opened up its merchandise store for purchases using Dogecoin, a meme-themed cryptocurrency that has become one of Elon’s personal crypto projects. Many have since criticized this move as an attempt to manipulate the market and create a short profit-taking session.

Matolcsy expressed concern about the role of cryptocurrencies in illicit activity. He said it was “clear-cut that cryptocurrencies could service illegal activities.” He also expressed reservations about the growth of “financial pyramids.” The central bank governor cited the Bank of Russia’s warning of “bubbles” sprouting forth from “the breakneck growth and market value of cryptocurrencies…defined primarily by speculative demand for future growth.”

Governor Matolcsy said that unity within the EU was needed to prevent “the building up of new financial pyramids and financial bubbles.” He did, however, emphasize that citizens of the EU, as well as companies, “would be allowed to own cryptocurrencies abroad,” if regulators were able to “track their holdings.”

The vice-chair of the European Securities and Markets Authority, Erik Thedéen, argued on Jan. 19 in favour of a Proof-of-Work ban for different reasons than the governor of the Central Bank of Hungary. Thedéen argued for a Proof-of-Work ban due to environmental concerns rather than the predominantly financial concerns that Matolcsy aired.

Matolcsy parroted the view of the Bank of Russia, which proposed a ban on crypto mining and trading on Jan. 20. Nevertheless, the next week, agencies and authorities in Russia seemed to overrule the central bank’s proposal, opting instead for regulations without a ban.

Looking at the Bitcoin price chart, we can see that BTC had been quite bearish in recent sessions, although the price has recovered during the ongoing session. If buyers retain the session, we could see BTC push above $43,000.