The Bitcoin price started the current session in the green, as BTC moved past $51,000 during the ongoing session. BTC has been extremely bullish during the current week, rising by 0.32% on Monday. The price continued to increase on Tuesday as it moved past the 200-day SMA and settled at $49,057. Wednesday saw a marginal increase that was enough to take BTC above the 20-day SMA, and an increase of nearly 4% took BTC to $50,816 on Thursday.

The Bitcoin price started the previous week in the red, dropping by over 6% and settling at $46,885, and slipping below the 200-day SMA. On Tuesday, the price recovered, rising by over 3% and moving back above the 200-day SMA. Wednesday saw BTC post another marginal increase that saw it move to $48,698. However, the price was back in the red on Thursday, falling by over 2% and settling at $47,638. Friday saw another significant drop, as BTC fell back below the 200-day SMA and settled at $46,117. BTC recovered over the weekend, rising by 1.60% on Saturday and then ending the weekend at $47,109 on Sunday. 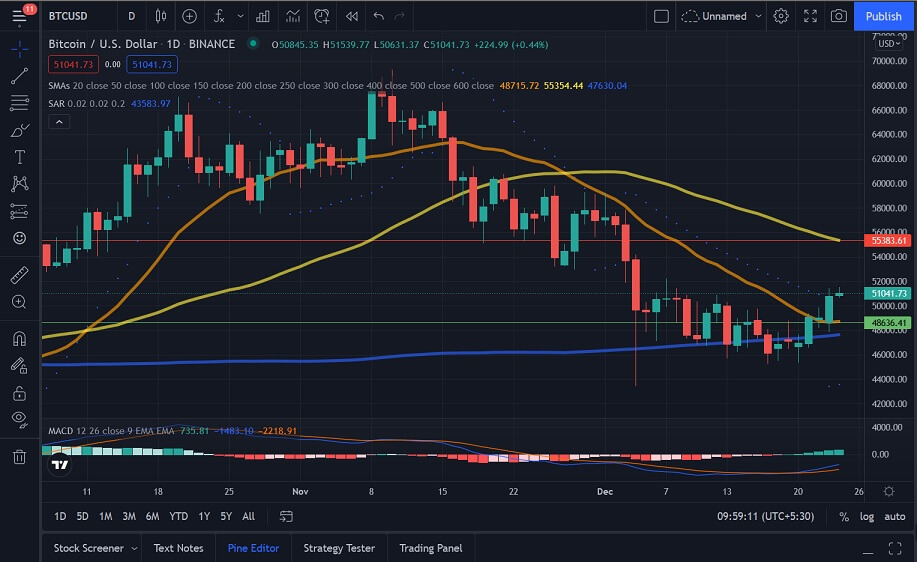 The Bitcoin price started the current week on a fairly positive note, rising to $46,959 on Monday. BTC continued to push on Tuesday, rising by over 4% and going above the 200-day SMA to settle at $49,057. Wednesday saw BTC move above the 20-day SMA before rising by nearly 4% on Thursday and moving to $50,816. The current session sees BTC move above $51,000, and with the Parabolic SAR having just flipped to bullish, we can expect BTC to push higher.

Looking at IntoTheBlock’s IOMAP for the Bitcoin price, we can see that BTC has strong support at around $48,603. At this price level, over 2.5 million addresses have bought more than 1.2 million BTC.

The 4-hour Bitcoin price chart shows that BTC had risen to $47,761, pushing above the 20-bar SMA. Thanks to the 50-bar SMA acting as resistance, the price fell back from this level and slipped below the 20-bar SMA to settle at $45,952. However, BTC made a strong recovery after dropping to this level, pushing back above the 20 and 50-bar SMAs and settling at $48,860. From this level, BTC rose to $49,225 before dropping to $48,126, where the 20-bar SMA was acting as support. As a result, BTC surged to $51,138 before dropping to its current level of $51,040. We can see that the MACD is currently bullish, indicating that we could see the price push higher. 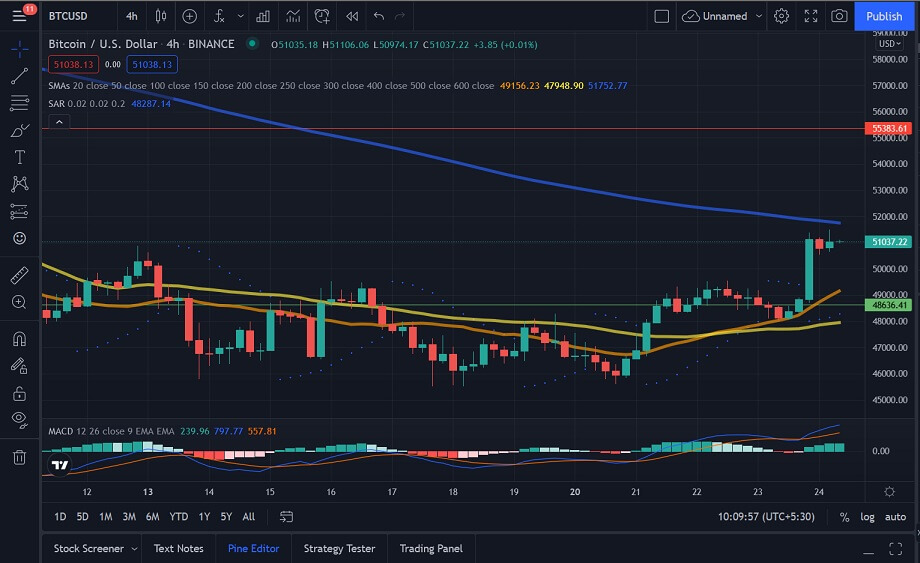 This Is How Many Bitcoins Michael Saylor Owns

MicroStrategy CEO and Bitcoin bull Micheal Saylor has reportedly disclosed a personal Bitcoin stash worth $866 million. According to a Markets Insider report, Saylor said in an earlier interview that besides his publicly listed company’s goal of accumulating Bitcoin, he also has similar aims. The chief executive reportedly owns at least 17,732 bitcoin.

Saylor has never sold any of his BTC, and in general, he does not “believe you should sell your bitcoin,” per the report. The MicroStrategy CEO reportedly said he envisions a bitcoin price of $6 million per coin in the future, a 12,000% increase over current levels.

Saylor has been outspoken about Bitcoin and cryptocurrency, most notoriously drawing a line between the two. In a November Twitter Spaces hosted by Bitcoin Magazine, the chief executive bashed out the standard recommendation to “diversify” investments.

In August 2020, Saylor’s software business purchased a quarter-million dollars worth of Bitcoin, turning the peer-to-peer (P2P) currency into its primary treasury reserve asset. The company has made several new buys since, leveraging cash flows, debt, and equity, while benefiting from bitcoin dips as it steps up and acquires BTC at a discount.

MicroStrategy's latest purchase was made earlier this month when it bought $82 million worth of bitcoin. It currently holds approximately 122,478 BTC. In an interview with ETF Think Tank in August 2021, Michael Saylor explained his company’s primary goal, to buy and custody bitcoin itself. The CEO said they had no intention to embark on yield-making strategies despite the notable returns.

“She’s going to do great,” Trump said of the former first lady’s NFT project while speaking with Fox News anchor Maria Bartiromo during her Mornings With Maria television program. However, Trump decried cryptocurrencies as “a very dangerous thing,” reinforcing comments he made in June on the news network.

"Well, I never loved it because I like to have the dollar. I think the currency should be the dollar, so I was never a big fan. But it’s building up bigger and bigger, and nobody's doing anything about it. It’ll make the big tech explosion look like baby stuff. I think it’s a very dangerous thing.”

Based on the actions of Republicans in the House and Senate over the past year (including specific moves taken during the fight over a bipartisan infrastructure bill), Trump would appear to be at odds with his political party on the subject.

This fall, the leading Republican on the HSFC, Patrick McHenry, sought to codify in law a safe harbor provision for token-focused startups, drawing on a proposal from SEC commissioner Hester Peirce, herself an advocate for a more open regulatory approach to crypto.

Looking at the Bitcoin price chart, we can see that BTC has been extremely bullish during the current week. If the current sentiment persists, BTC could move towards $51,500.